Oxford's gasworks were in St Ebbe's - not strictly in South Oxford, but the site eventually stretched over both north and south banks of the river just north-west of Grandopnt, and for local residents the noise and smell produced by the works were very much part of their everyday lives. Some worked there and others regularly passed the site on their way to and from the city centre. This photograph shows the eastern side of the gasworks site in 1945, from the towpath near the end of Marlborough Road. 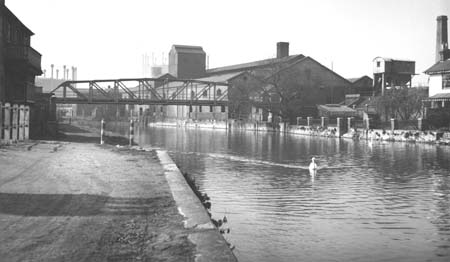 This photograph was taken in 1945, looking west along the towpath from a spot just to the east of the northern end of Marlborough Road. The gasworks pipe bridge (now a footbridge) is near the centre; the large shed-like building behind it and to the right is the retort house. Two gas holders (whose tops look like crowns) can be seen in the distance. Image © Oxfordshire County Council, Oxfordshire History Centre, ref: D252205a.

The gasworks were Oxford's first large-scale markedly 'industrial' building complex, established by Act of Parliament on 23 May 1818 under the name of 'The Oxford Gas, Light and Coke Company', though it was recorded in all early advertisements as 'The Oxford University and City Gas Light and Coke Company'. The works were initially on a two-acre site on the north bank of the Thames just to the south-west of the city centre. The raw material - coal - could be delivered by boat, and residual by-products (coke, tar, sulphur and ammonia) despatched via the same route. St Ebbe's was low-lying, so that the natural increase in pressure, as it rose in the mains, could be utilised. It was also far enough from the city that the noise and fumes it produced did not affect the residents of the central parishes too greatly. Soon after the arrival of the gasworks, hundreds of terraced houses were built in a grid of streets around the works site, north of the river, creating the densely-packed suburb of St Ebbe's. Towards Folly Bridge, a series of wharves, timber yards, a saw mill and (until 1856) the city waterworks, contributed to the area’s industrial character. 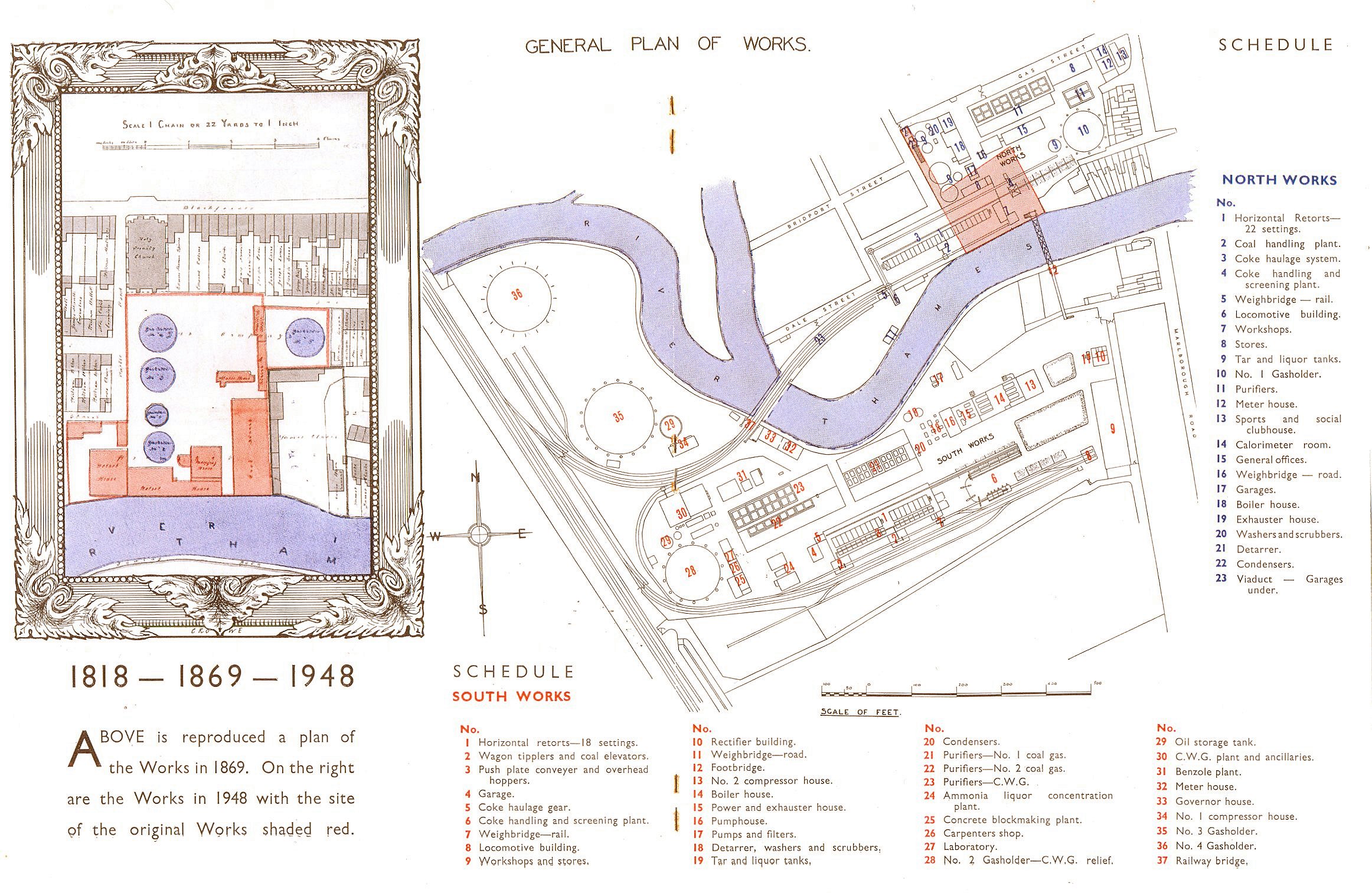 The original gasworks were founded in 1818 on the northern bank of the Thames (shaded red on the plan above). The gasworks eventually occupied sites on both sides of the river, totalling 19 acres. The South Works were immediately to the west of Grandpont; the northern end of Marlborough Road, and the pipe bridge near it, can be seen on the far right of the plan. On the left, the framed plan of the works as they were in 1869 shows the close proximity of terraced housing and Holy Trinity Church. Image © The National Grid (Oxford and District Gas Company), copy in the Oxfordshire History Centre, ref: OxS, OXFO 665.7.

Gas was Britain's first true utility industry, with some large, vertically-integrated companies which paved the way for future public utilities. By the 1830s most towns had gas lighting; it was first introduced to Oxford in 1819 and gas street lamps were lit by hand at sunset, and switched off at sunrise, except during the three summer months. In the later 19th century the scale of gas manufacture grew enormously as rapid increases in population, rises in real wages, and the advent of the mass media fuelled a growing demand for manufactured goods and for clean water and power. Gas was used more and more for cooking, heating, and for powering industrial engines. The amount of gas sold nationally increased threefold between 1882 and 1912 and the number of gas companies almost doubled to 826. Gasworks developed and grew correspondingly.

The local newspaper Jackson's Oxford Journal reported frequent improvements and extensions to the Oxford works, particularly from 1870 onwards. In 1871 a new retort house [in which gas was produced by heating coal in vessels called retorts; marked '1' on the North Works site on the plan above] was built on a newly-acquired three-quarter-acre plot adjacent to the existing premises. It necessitated the demolition of ten houses but allowed an increase in the number of retorts from 181 to 252, so that the works could cope with rapidly increasing demand.

By 1882 there were 3,600 gas consumers in Oxford [the city's population was around 41,000]. The gasworks acquired land south of the Thames (just to the west of the newly-developing suburb of Grandpont) partly from University College. Here the company built new plant and gasholders, though opposition from both city and university prevented the actual manufacture of gas there. In 1886/7 a specially-built spur of the Great Western railway was constructed to serve the works. Jackson's Oxford Journal noted that 'The inconvenience and expense of carting coal through the streets from the Railway Station to the Gas Works has long been felt, and the present undertaking will prove a saving to the ratepayers of the City, and the roads will be relieved of their heavy traffic.'

The spur crossed the Thames just to the west of the gasworks on a new bridge - Isis Bridge - which was built immediately beside the existing Great Western mainline railway bridge. Both these bridges still carry railways today. 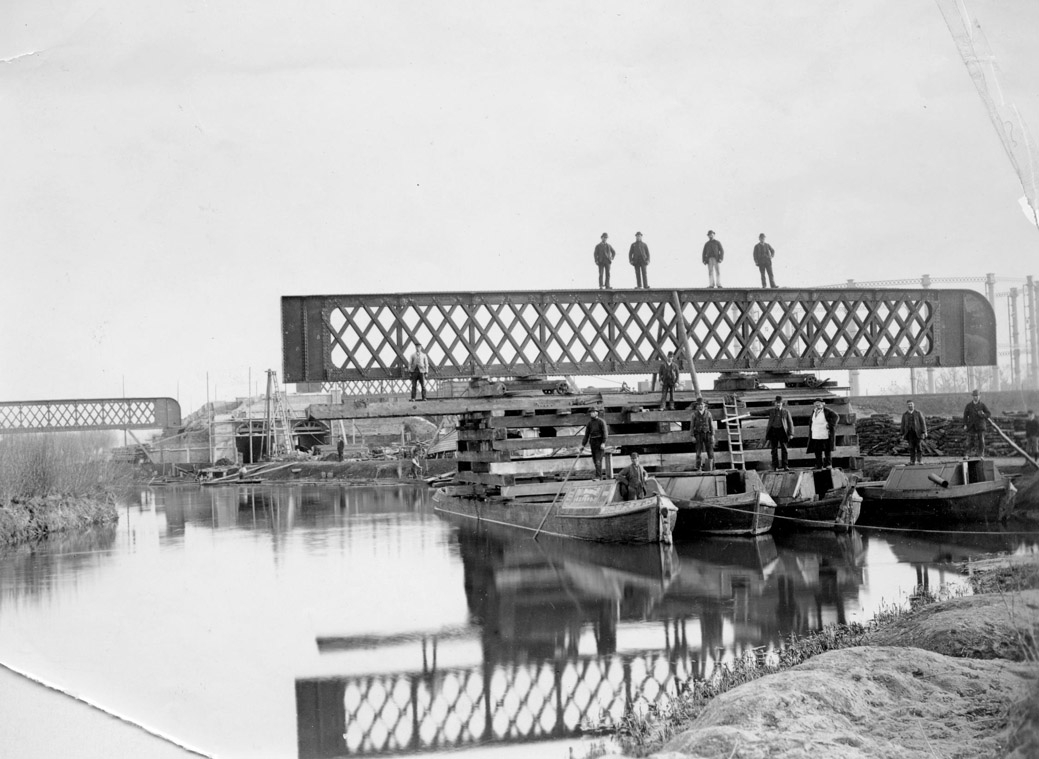 A section of the new gasworks railway bridge being floated along the Thames on barges during the bridge's construction in 1886. Health and safety were obviously not major concerns. Photograph by Henry Taunt, © Oxfordshire County Council, Oxfordshire History Centre, ref: HT140.

The line then crossed the Thames again, further south, on another new bridge (which also still exists) built privately by the gas company. This was designed by engineer Charles Hawksley and cost almost £6,000. The central cast iron piers were sunk twenty feet into the river bed and the floor of the bridge was supported by cross girders three feet deep through which cast iron gas pipes passed. These can still be seen under the bridge. (This bridge and the railway spur can be seen near the centre of the plan above: the single-track spur leaves the main line between the gasholders marked '36' and '35' and then curves south of gasholder '35'.) 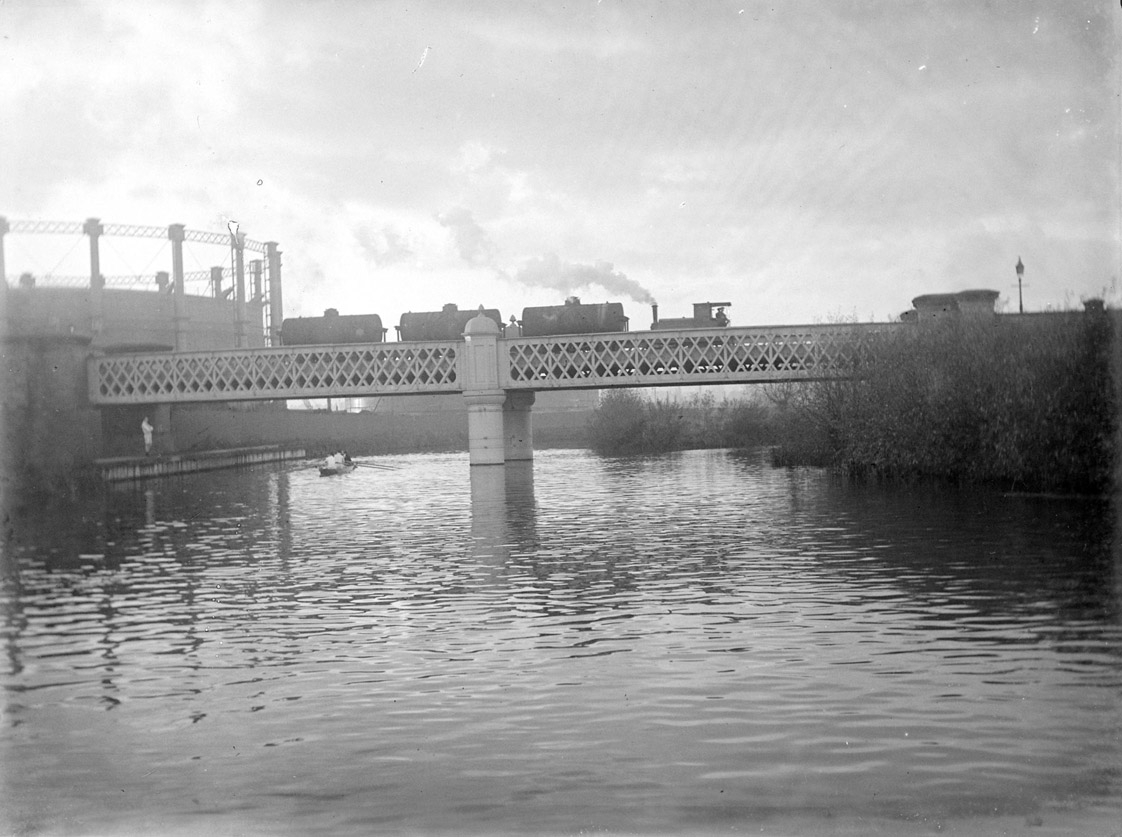 The completed bridge with a coal-carrying locomotive crossing it and one of the six gas holders behind, 1925. Image © Oxfordshire County Council, Oxfordshire History Centre, ref: D254356a.

The bridge was a multifunctional structure: one half of its platform supported a single track of rails, the other was used as a cart road on which horses pulled wagons laden with coal, because GWR steam engines were not allowed on to the private gasworks railway. This continued for twenty years until 1907 when the gas company purchased its first steam locomotive. A footway with granite kerbs allowed workers to cross between the sites on the north and south banks of the river. On the northern side the rails were carried on an elevated wooden gantry eleven feet above the ground as far as the retort house. 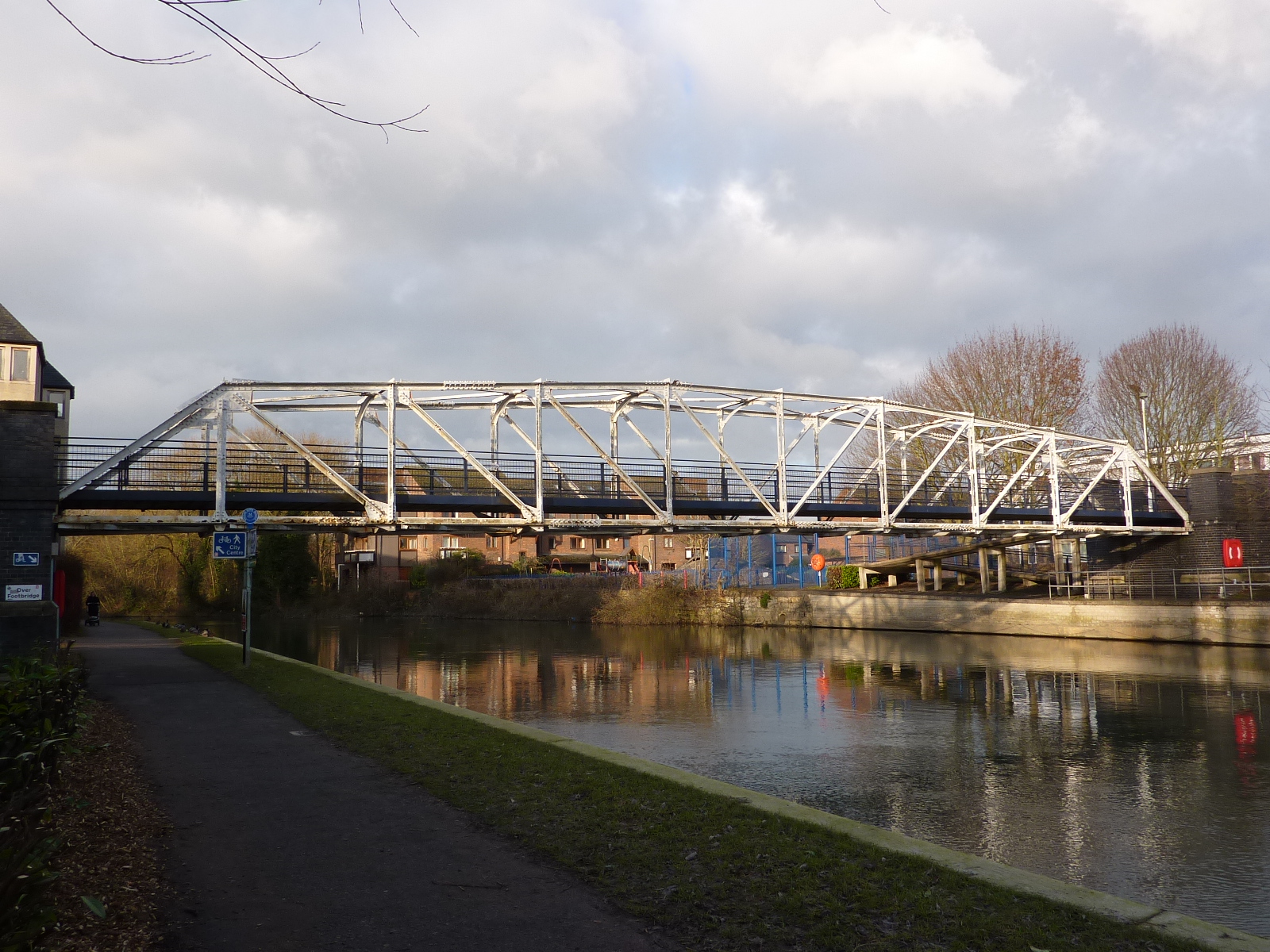 In 1927 a new bridge was built near the northern end of Marlborough Road to carry pipes across the river between the north and south sites of the works. Later it was adapted to become a footbridge to allow workers to cross, and it is now a public footbridge (and part of Sustrans cycle route 5) linking Grandpont with St Ebbe's and the city centre. In March 2021 the bridge was unexpectedly closed, the City Council having received a report warning that it was unsafe.

The pipe bridge and the two railway bridges (the southern of which is also now a footbridge) are the last physical vestiges of the St Ebbe's gasworks, which closed in 1960. Thereafter Oxford consumers got their gas from Southampton and Reading until North Sea gas became available in 1971. Two gas holders remained in use at St Ebbe's until 1968 but these and all the other structures relating to the gasworks, apart from the three bridges, were eventually demolished. (The same thing was happening to 19th-century gasworks across the country.) Preachers Lane housing estate now occupies part of the northern site, and Gas Street, which was the original entrance to the works, no longer exists. The suburb of St Ebbe's itself, which grew up around the gasworks on the northern bank of the river in the 1820s, was also cleared, and many of its residents went to live in newly-built Blackbird Leys. The Westgate shopping centre now occupies much of the area, which was once criss-crossed with streets lined with two-up two-down terraced houses.

The rest of the gasworks site is now a nature reserve with a pleasant riverside walk running through it. But when the gasworks were functioning, between 1818 and 1960, this area was very different. The poet WH Auden (1907-1973), an undergraduate at Christ Church in the mid 1920s, would bring visitors here to show them what he considered to be the embodiment of 'The Waste Land' described in TS Eliot's poem of the same name, of which he was a great admirer.

The Gas Light & Coke Company's showrooms and offices were opened at 96 St Aldates in 1921, and moved to larger premises at 119 St Aldates in 1938. The balcony of the building includes this rather charming depiction of 'Mr Therm', an animated character who featured in the company's advertising in the 1930s.

Looking north along the river towpath in 1897, towards the Great Western Railway's Isis Bridge, which carried a spur of the railway serving the gasworks. The mainline railway bridge is immediately behind it (but only its supporting piers can be seen). These two bridges, and the curving footbridge beyond, still exist. Image from James Dredge, Thames Bridges from Tower to the Source (1897). (Click image to close) 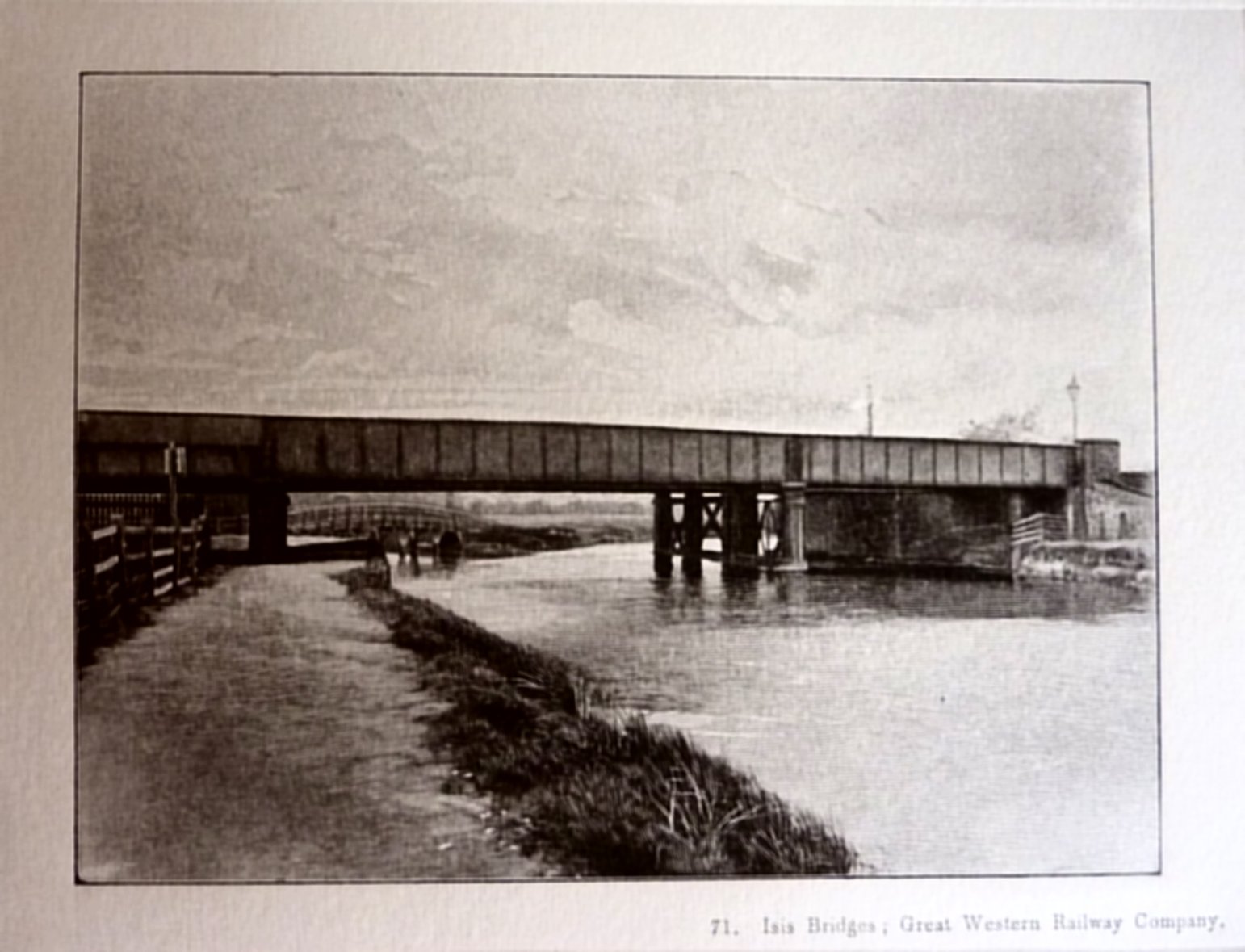 Looking east towards the gasworks railway bridge in 1897. The large supporting arches at either end were built of dark blue engineering bricks. Image from James Dredge, Thames Bridges from Tower to the Source (1897). (Click image to close) 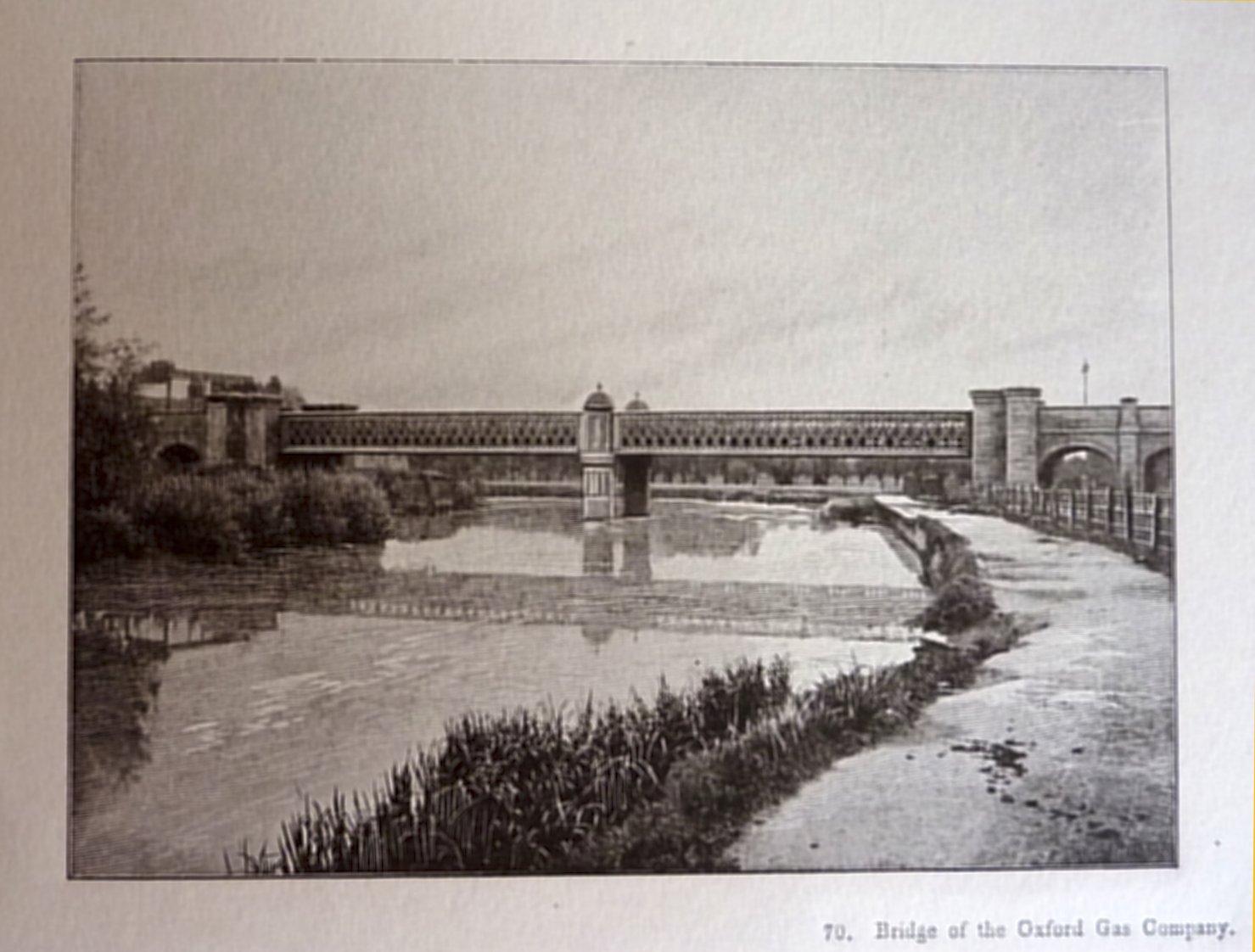