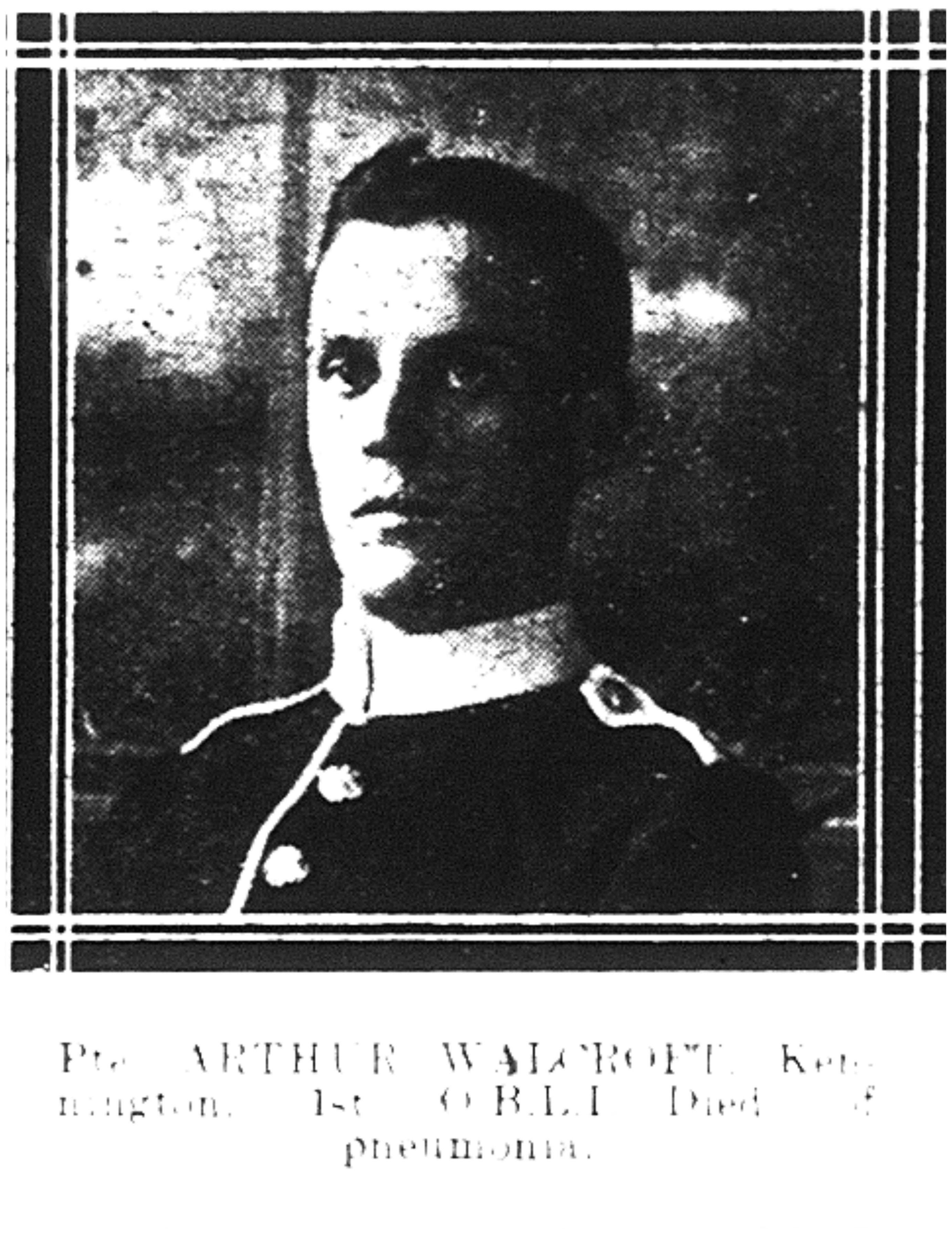 Arthur Walcroft was born in August 1894 in Wallingford (then in Berkshire), the son of Henry and Eliza Ann Walcroft. Henry had been born in 1861/62 in Sutton Courtenay (also then in Berkshire) and worked as a carpenter for a boat builder. Eliza had been born in 1869/70 in Charney Bassett near Wantage (also then in Berkshire) and was a dressmaker. The couple married in 1889/90 and lived in a house on the High Street in Wallingford, where the first three of their four children were born: Percy Henry (born 1890), Kathleen (1891/92) and Arthur Joe (1894). In around 1895 the family moved to the High Street in Sutton Courtenay and a fourth child, Francis Howard, was born there in 1895/96.

The family were still in Sutton Courtenay in 1901 but thereafter they moved to Oxford. In 1911 Arthur and his older brother Percy were running a greengrocer's at 17 Great Clarendon Street in Jericho and they, their parents, brother and sister were living above the shop. Kathleen was working as an assistant in the shop and Francis was a house boy.

Arthur Joined the Oxf & Bucks Light Infantry in 1912, and became a Private with the 1st Battalion of the Oxf & Bucks Light Infantry, service no. 9691. In November 1913 he married Annie Neal, the daughter of a farmer, at the church of SS Philip & James. Annie lived at 133 Woodstock Road; Arthur's address was given on the marriage certificate as 34 Gloucester Green. Arthur's battalion was sent to India, and soon after the outbreak of War, in November 1914, it was sent to fight in Mesopotamia (modern-day Iraq), under the command of the 17th Indian Brigade of the 6th (Poona) Division of the Indian Army. Turkey had entered into the War in support of Germany in the opening days of November 1914, and it became necessary to safeguard British interests in Mesopotamia and the Persian Gulf. At the Battle of Ctesiphon, which took place on the western bank of the River Tigris in the Iraqi desert on 26-27 November 1915, half of the 8,500 British and Indian soldiers were killed or wounded. The survivors retreated to Kut-al-Amara, 100 miles south of Baghdad, and from 7 December 1915 to 29 April 1916 they were besieged by the Turkish Army. Arthur died of pneumonia on 26 December 1915, during the initial stages of that siege. He was 21. The garrison surrendered four months later.

Arthur was buried at the Amara War Cemetery, now in Iraq.

Back at home, Arthur's younger brother Francis had married Gladys Elsie Blagrove in July 1915 at St Matthew's church; both were aged 20 and gave their address as 4 Jubilee Terrace in Grandpont. Francis was working as a chauffeur, possibly for Gladys's father George Blagrove, who was a cab proprietor. The couple appear to have moved from 39 London Place (St Clement's) to 27 Newton Road in around 1917, and it seems that this is why Arthur is commemorated on the war memorial of the local church, St Matthew's. Francis was absent in 1918 (according to the electoral register), as a civilian carrying out military work in timber supply.

The caption on the photograph of Arthur which appeared in the Oxford Journal Illustrated on 2 February 1916 (above) described him as from Kennington, though he is not named on the Kennington War memorial and no Walcrofts appear in contemporary street directories for the village.

Arthur's older brother Percy married a Miss Kerry in Oxford in late 1915 and by 1919 he was living at 17 Sidney Street in East Oxford. He died in the Ploughley registration district (around Bicester) in June 1943, aged 52.

Arthur and his wife Annie had no childen; Annie went to live in Brailes, about 12 miles west of Banbury, and in October 1917 she remarried, to a man called J Walton, who was a farm bailiff.

With thanks to Barry Burnham for additional information.