Grandpont House sits on stone arches over a water channel off the River Thames near Folly Bridge. It was built in 1785 for Sir William Elias Taunton (1744–1825). He was the City Solicitor, became Town Clerk of Oxford in 1794, and was knighted in 1814. The Tauntons were a large and important Oxford family; several of William's grandsons are buried in St Sepulchre's cemetery in Jericho and you can read more about the family on the cemetery's excellent website. 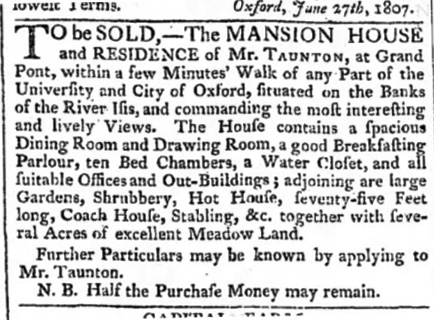 Taunton put Grandpont House on the market in 1807. In the 1850s and '60s it was lived in by Thomas Randall (1805-1887), a prominent Oxford tailor who may have been the inspiration for the Hatter in Lewis Carroll's Alice's Adventures in Wonderland.

In the early 1870s Grandpont House was occupied by Queen Victoria's son Prince Leopold, whilst he was an undergraduate at Christ Church.