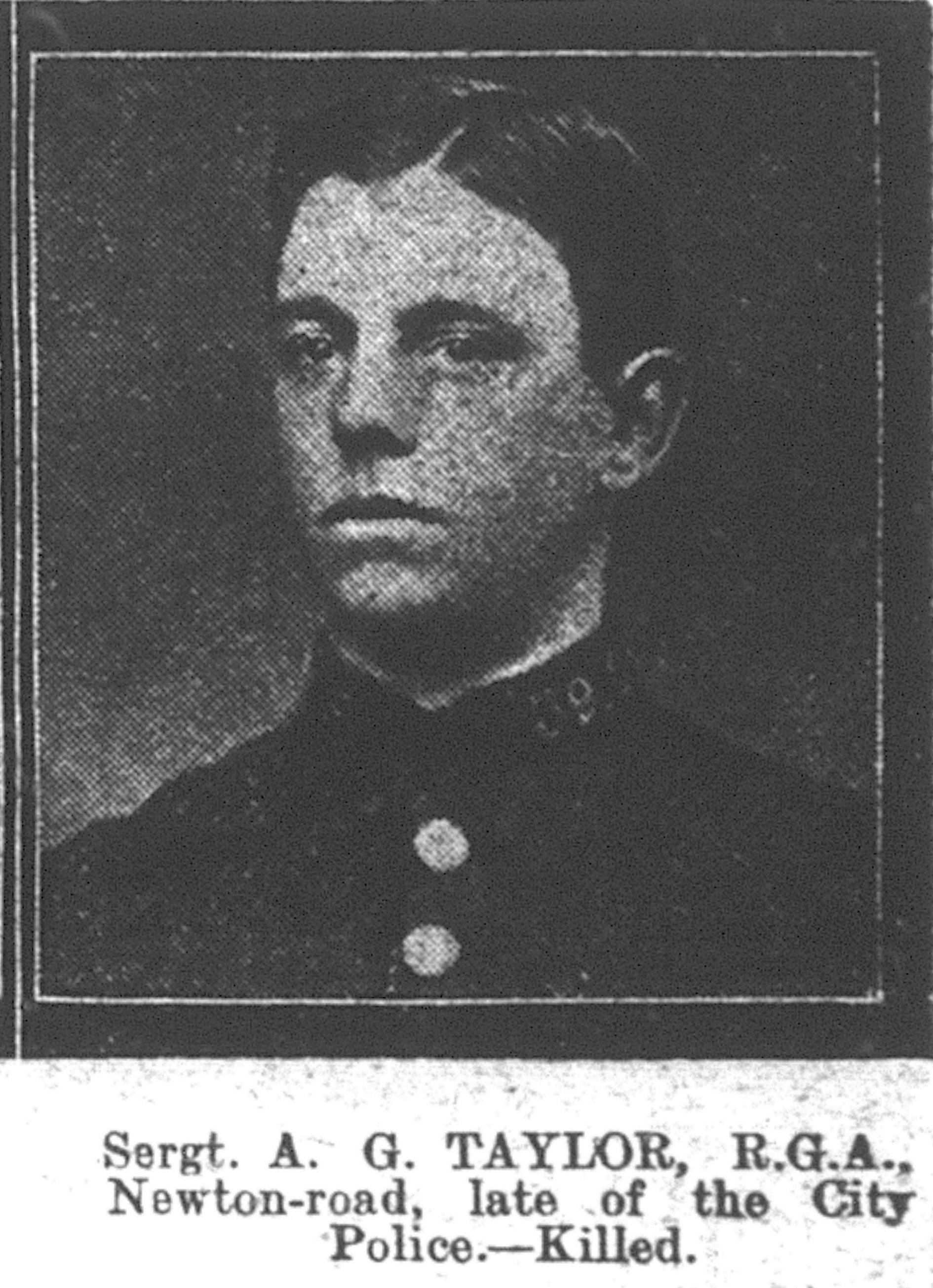 The information below is kindly supplied by Barry Burnham, whose full biography of Albert Taylor is here.

The Taylor family were living at Witney’s Farm, Warpsgrove (near Chalgrove) in 1901. Joseph was working as a farm stockman; the two oldest children had left home and Henry was employed as a farm labourer. By 1911 the family had moved to Joseph’s home village of Ickford in Buckinghamshire and Albert, now 21, was working as a mason and bricklayer.

Albert moved to Oxford and joined the Oxford City Police on 25 August 1911, as PC 39. In December 1914, when he was 24, he married Hilda Jane Clifton at the Headington Registry Office. Hilda was 25 and had been born in the hamlet of Sutton, south-east of Witney. She was one of the seven children of a farmer, Henry Clifton, and his wife Letitia. In 1911 Hilda was still living at home and was a dressmaker; she appears to have moved to Oxford soon afterwards. She had a daughter, Dorothy Hilda Clifton, who was born in March 1914 (nine months before her marriage to Albert). A son, Ronald George Taylor, was born to the couple in 1915.

Albert enlisted into the army on 27 May 1915 with at least eight of his fellow Oxford City Police Officers. They joined the newly formed 132nd (Oxfordshire) Heavy Battery of the Royal Garrison Artillery and were deployed to France in March 1916. Albert started as a Gunner but was quickly promoted to Sergeant (service no. 291926). In July 1916 he was reported as being in hospital in France suffering from shell shock. In the autumn of 1917 he came home for a period of leave. Only a few weeks after his return to the front, on 1 October, he was killed. He was sleeping in a bomb-proof shelter when a shell from an enemy aeroplane burst nearby, and he was struck by the splinters. This was during the Battle of Polygon Wood, a phase of the Third Battle of Ypres, popularly known as Passchendaele. He was 28.

Albert was buried at the Huts Cemetery, West Vlaanderen, Belgium. At the request of his widow Hilda, 'I am the Resurrection and the Life' is inscribed on his headstone.

Forty one Oxford policemen (out of a force of 79) fought in the War and four were killed; they are named on the Oxford City Police memorial. Three of them (George Judd, Charley Martin and Albert himself) were men who had enlisted together on the same day.

The report of Albert's death in the Oxford Journal Illustrated described him as 'of Newton Road' and a 'Mrs Taylor' was living at 23 Newton Road in Grandpont for a year in around 1917; this may have been Albert's widow Hilda.

Albert’s father Joseph died, aged about 68, just four days after his son, on 5 October 1917, in Ickford. Albert's mother Maria and her widowed daughter-in-law Hilda, and the two young children Dorothy and Ronald, were living together in Standlake near Witney soon after Joseph’s and Albert’s deaths. Hilda was still living in Standlake in the 1920s.

The Oxford City Police war memorial, which is in St Michael’s church on Cornmarket. It was formerly displayed at the police station in Blue Boar Street before the station was relocated to its present site on St Aldates. Photo by kind permission of Barry Burnham. (Click on image to close) 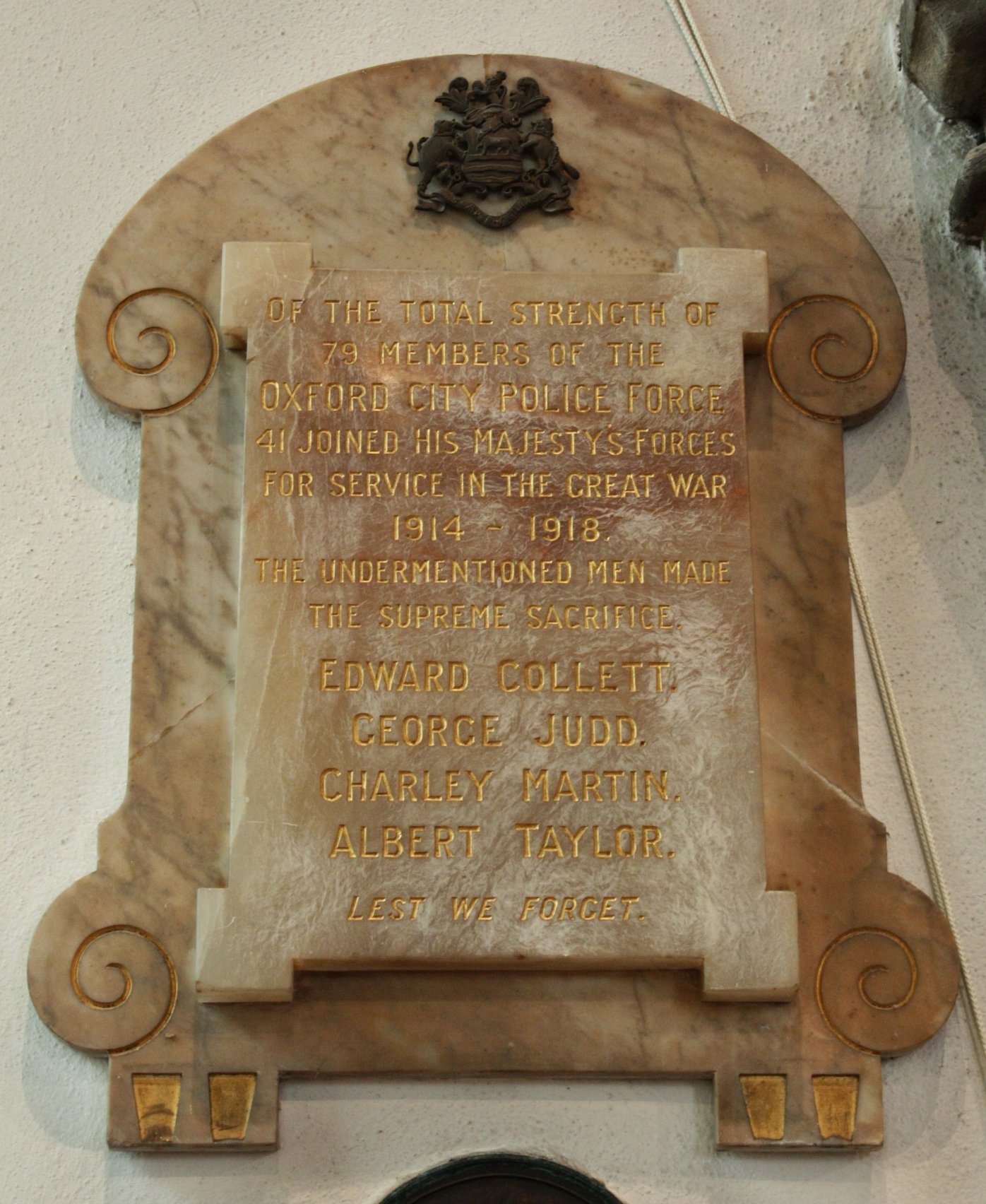