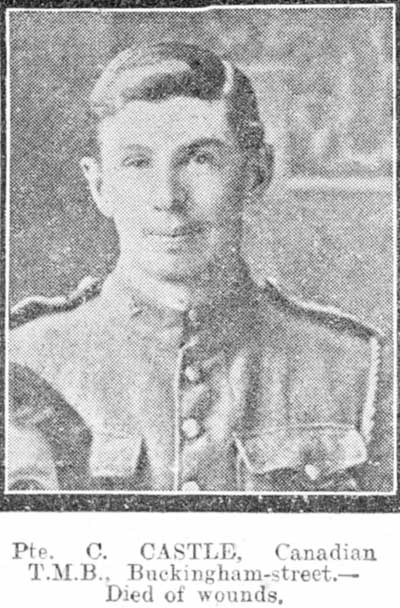 Most of the information below is kindly supplied by Stephanie Jenkins whose full biography of Charles Castle appears on the St Margaret's war memorial website.

When Charles was three his mother married Charles Castle (born in Islip in 1871), who was probably his father. In about 1900 the family moved to 23 Hayfield Road in North Oxford. Charles senior worked as a jobbing gardener, and Charles junior attended SS Philip & James School and was a member of the Boys’ Club in Polstead Road. By the time of the 1911 census Charles, now 19, had become a jobbing gardener like his father. He later worked for Messrs Bates, florists of Rose Lane, near Magdalen Bridge.

On 7 May 1913 Charles emigrated to Canada, sailing on the SS Ausonia to Quebec, bound eventually for Toronto. At the end of August his sweetheart, Annie Louise Greenwood, followed him. They were married in Brampton in Peel County, Ontario, on 29 April 1914; he was 23 and she was 25. They had a son.

Charles joined the Canadian Army in mid-1916, and became a Private in the 9th Canadian Light Trench Mortar Battery of the 3rd Canadian Division, service no. 775462. He died on 18 August 1918 from wounds received during the Battle of Amiens, and its subsidiary Damery, on the Somme. It was these actions, during the period 8-17 August 1918, which brought about the demoralisation and destruction of the German Army.

Charles was 27 when he died. He is buried in the Villers-Bretonneux Military Cemetery on the Somme in France.

When Charles had joined the Canadian Army in mid-1916, his wife Annie came back to Oxford and lived in the house that she had grown up in, 20 Buckingham Street in Grandpont. After his death she continued to live there and in 1922 she married Henry J Hewer. They had a daughter, Kathleen, the following year.

Charles’ father Charles senior died in 1923 aged 53; his mother Emily remained as a widow at 23 Hayfield Road until 1929, when she married Henry Phipps at the age of 59.

Charles is also commemorated on the St Margaret’s war memorial on the corner of Kingston Road and St Margaret’s Road in north Oxford.