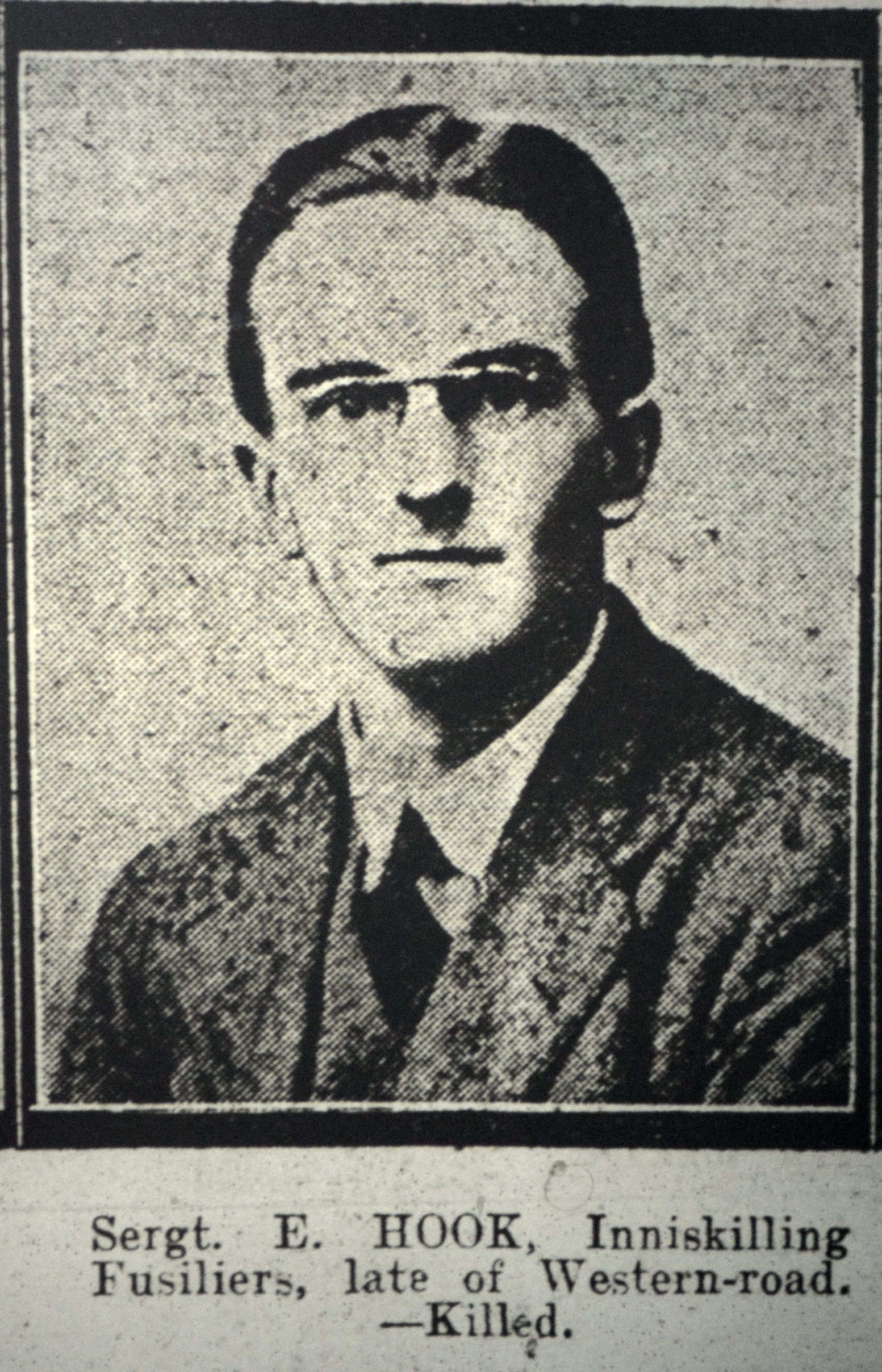 Edgar Hook was born in Oxford in the spring of 1889, the only child of Thomas Hook (born 1855/56 in Radley) and his wife Laura (née Hickman, born in 1854/55 in Acton, West London). The couple had been married in 1882/83 and were living at 8 Cranham Street in Jericho in 1891. They were still there in 1901 and Edgar's aunt, Eliza Cresswell, and maternal grandfather, George Hickman, were living with them. Eliza was still with them when the family moved to 15 Bedford Street in Iffley Fields, which is where they were living in 1911 (and remained until at least 1922). In 1891 Edgar's father was a Post Office sorting clerk; by 1911 he had risen to be a Post Office overseer (though by 1917 he had retired). Edgar was a school teacher.

At some time before 1917 Edgar enlisted in Acton, first joining the Oxf & Bucks Light Infantry as a Corporal, service no. TR/12205. He later transferred to the 9th Battalion of the Royal Inniskilling Fusiliers with the rank of Sergeant, service no. 47039.

In November 1917, when he was 28, Edgar married Winifred Mary Lucas at St Matthew's church. She was 25 and a telegraph clerk, born in Oxford. Her father, Arthur Lucas, was a Post Office superintendent, so the families may have known each other through work. The Lucas family (Arthur, his wife Catherine, Winifred and her sister Phyllis) lived at 29 Western Road and following her marriage Winifred continued to live there whilst Edgar was away fighting, and Edgar used this as his address. He was killed only nine months later, on 3 August 1918, aged 29, in northern France. The area to the east of St Jans-Cappel and Bailleul to the south had been captured by the Germans during Operation Georgette the previous April. Edgar was part of 36th Division holding the line here, before much of the ground taken in April was successfully recaptured by the Allies at the end of August and in early September 1918. Edgar was buried at the Mont Noir Military Cemetery, St Jans-Cappel. At the request of his widow Winifred 'We loved thee well / but Jesus loves thee best / Good night' was inscribed on his headstone.

It seems that Winifred moved to Bournemouth (14 King George Avenue, Moordown) soon after Edgar's death. He left her his estate of £184 15s (about £8,000 in today's money). She may have remarried - a Winifred Mary Hook married a man called Langley in Easthampstead near Bracknell in 1924.