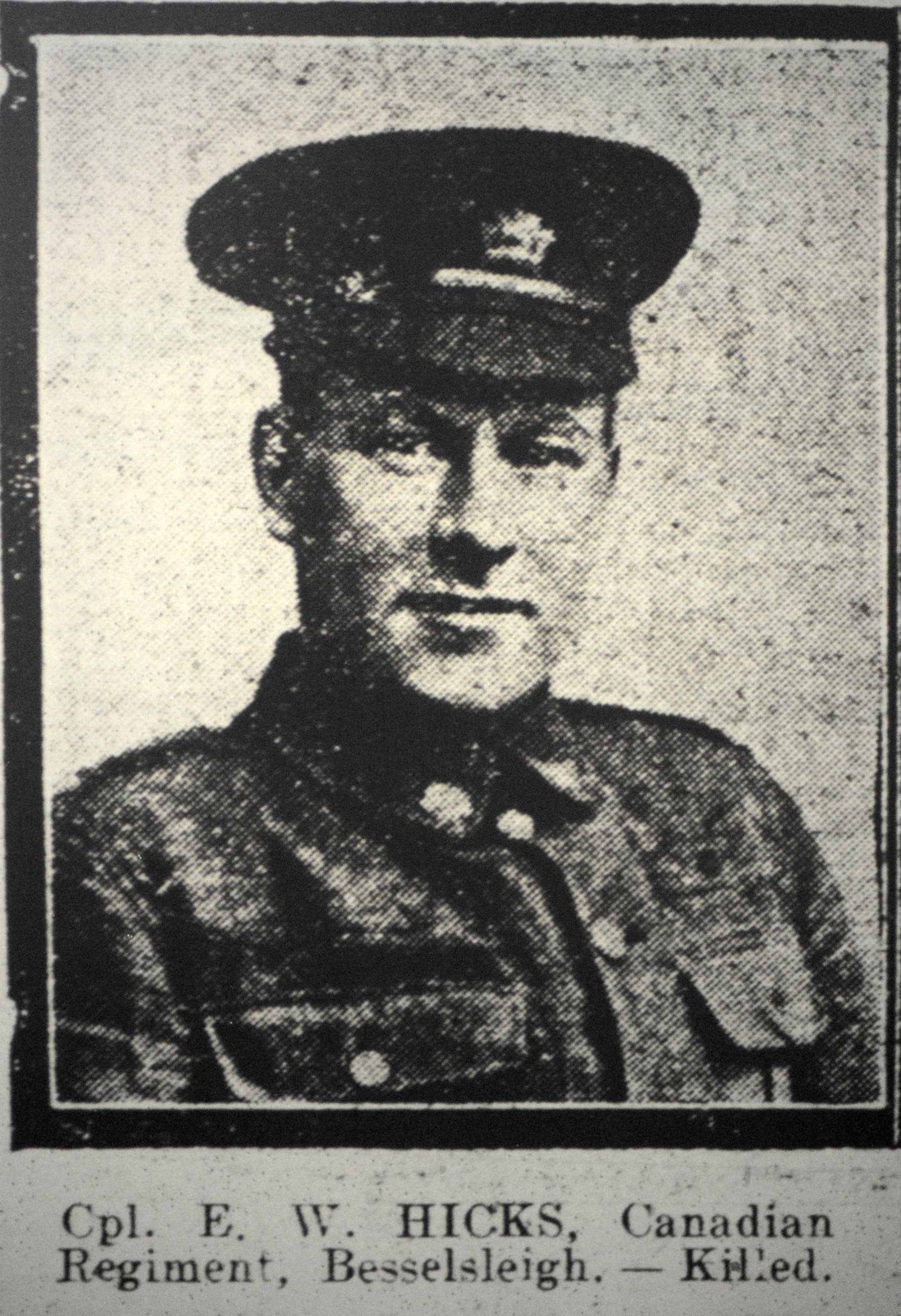 Edward William (also known as William Edward, or Ted) Hicks's connection with Grandpont is unclear. He was born in Besselsleigh near Abingdon (then in Berkshire) on 9 December 1888, and baptised in St Thomas's church in Oxford the following March. His parents were Joseph and Sarah Elizabeth Hicks. Joseph had been born in Weston on the Green (near Bicester) in 1849/50, the son of a carrier. Sarah (née Beach) had been born in Upper Chelsea in London in November 1857, the eldest daughter of a butler. The couple married in Chelsea in June 1878 but moved to Oxford soon after as the first of their twelve children, Charles, was born here in the spring of 1880. In 1881 they were living at 17 Duke Street off the Botley Road.

The family moved to Besselsleigh in 1888. Joseph was a baker but here he also took on the licence of the Greyhound pub, with his wife Sarah assisting him in the pub and bakery businesses. Seven more children were born over the next 11 years: Edward William (December 1888); Olive (1889/90); Frederick (September 1892); Ivy (February 1894, and died aged two months); Daisy (September 1897); and George (April 1899).

In around 1905, when he was about 17, Edward emigrated to Canada. He lodged with a Mrs Reynolds at 124 Scollard Street, Toronto, and was a chauffeur for the eminent philanthropist and businessman Cawthra Mulock.

Meanwhile the rest of the Hicks family continued to run the Greyhound in Besselsleigh and to live there. The younger children went to Cumnor school. The oldest son, Charles, became a confectioner, and in 1911 three of his siblings - Amy, Thomas and Frederick - were working at the pub and bakery business with their parents. In April 1911 Thomas found brief fame when he killed a wandering armadillo.

The children's father Joseph died in March 1913 (leaving effects worth £477) and was buried in St Lawrence's church at Besselsleigh; Edward sent money from Canada to have a gravestone made for him.

At the outbreak of the War Edward enlisted with the Sifton Machine Gun Battery, eventually joining the 1st Canadian Motor Machine Gun Brigade and became a Corporal, service no. 45517. He was sent to France and was killed in action near Arras on 24 March 1918, aged 29. On 21 March the Germans had begun to transfer very large forces from the collapsing Eastern Front for their final offensives in the west; this was known as ‘Operation Michael’. The attack fell on the Fifth Army which included the 1st Canadian Motor Machine Gun Corps, which had only recently been attached. The action on 24 March took place close to the River Somme, the Canadian MMGC HQ being at Maricourt. The Germans captured Clery opposite. This was part of the Battle of St Quentin.

Edward's body was never recovered, but he is commemorated on the Canadian National Vimy Memorial near Arras and in the Canadian First World War Book of Remembrance. His death was reported in the Oxford Journal Illustrated on 17 April and this report also appeared in the Toronto Evening Telegram on 7 May 1918 (though it wrongly gives his place of origin as 'Abington' rather than Abingdon, and his age as 23 rather than 29).

Four of Edward's brothers also fought in the War, but appear to have survived. Charles was in the Oxf & Bucks Light Infantry and was wounded in August 1916.

Following Edward's death his widowed mother Sarah moved to a house called 'Pironne' in Cumnor, just to the west of Oxford. She died in 1938, aged 80 or 81, and is buried in the graveyard of St Lawrence's church in Besselsleigh. She is commemorated on her husband's gravestone together with their baby daughter Ivy and son Edward.