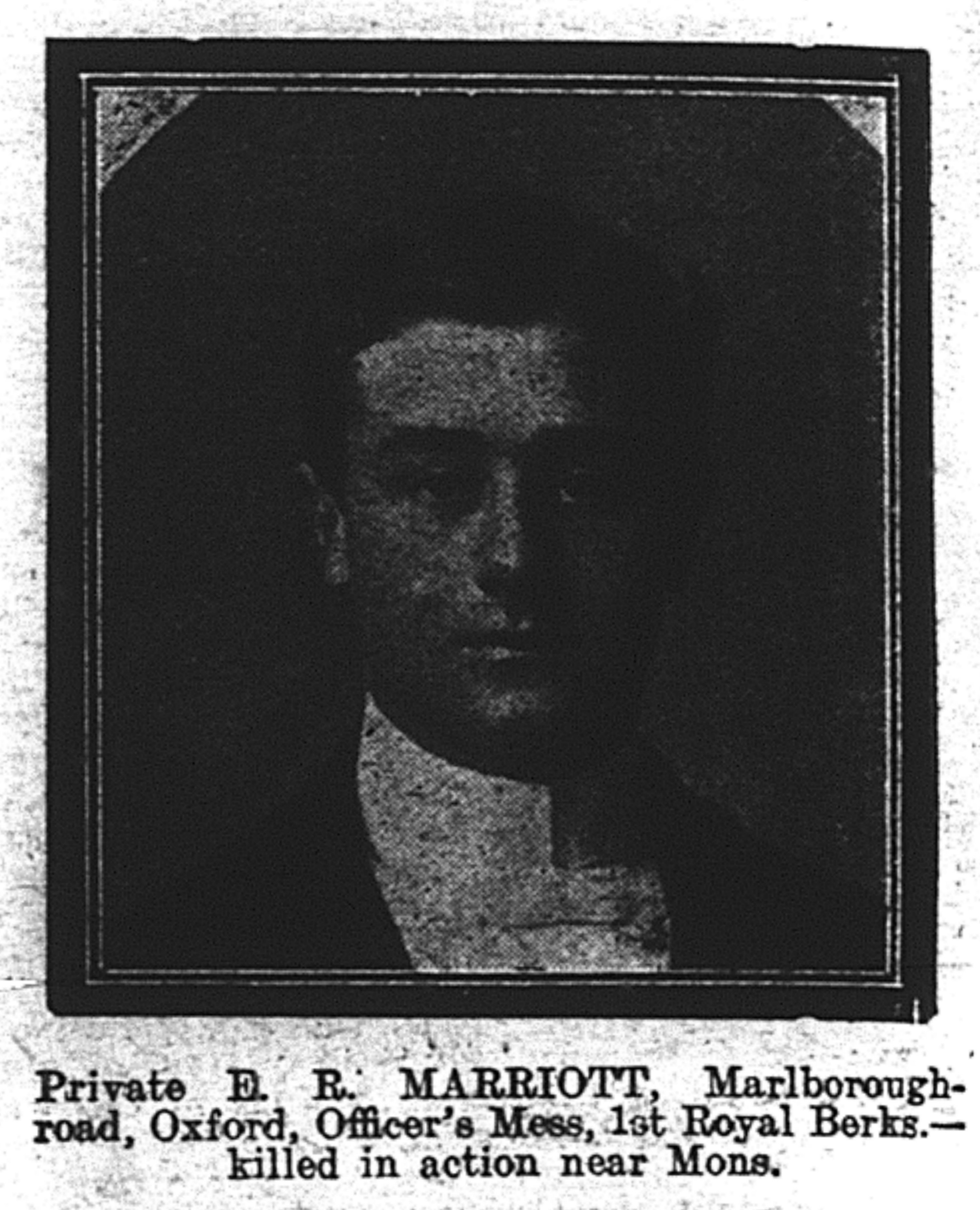 Edward Marriott was born in Kinsale, County Cork, Ireland, in 1893/94. His father, James Albert William Marriott, had been born in London in December 1864 and was in the Royal Marines; he was serving in Ireland at the time of Edward’s birth. Edward’s parents were married on the Isle of Wight on 10 April 1893 and they had two sons: Edward and his younger brother Alexander Clifford (sometimes known as John), born in March 1896 in Dublin. Their mother, Christina Elizabeth (née Shirlaw), died in Ireland in 1899 when the boys were still young.

James remarried in 1901, to Rose Ellen, who came from Collumpton in Devon and was 10 years her husband's junior. The family moved to Oxford and a daughter, Daisy Beatrice, was born in 1904/05. They lived firstly in Cowley Military Barracks but James must have left the army because he became an under-porter at Christ Church in September 1907. At this point the family probably moved to 147 Marlborough Road, Grandpont; they were certainly living there by 1911. A son, William Gerald, was born that year.

Edward worked as a footman before enlisting in Reading as a Private with the 1st Battalion of the (Princess Charlotte of Wales's) Royal Berkshire Regiment, service no. 9757. His battalion was based in Mandora Barracks, Aldershot. On the outbreak of war they embarked (on 13 August 1914) for France and Flanders, in the first elements of the British Expeditionary Force, landing at Rouen. The battalion served on the Western Front throughout the conflict.

After the Germans were defeated at the Marne, they dug in along the River Aisne, repelling British attacks. It was here that formal trench warfare began to be established. 1st Berkshire were positioned in the Soupir area close to La Metz Farm. Edward was killed in action on 19 September 1914, aged 20 or 21, following the Battle of the Aisne between Picardy and Champagne. He is named on the La Ferté Sous Jouarre Memorial which commemorates 3,740 officers and men of the British Expeditionary Force who fell at the battles of Mons, Le Cateau, the Marne and the Aisne between the end of August and early October 1914. Like all those men, Edward has no known grave.

Edward's younger brother Alexander (or John) was a baker's doughmaker before he joined the Royal Navy in 1911 when he was 15. Over the next nine years, and hence throughout the War, he served on various ships as a Signaller and later a Leading Signaller. He was discharged in May 1920 and joined the Royal Naval Reserves. He died in South Shields in March 1953 aged 56.

Edward's father James remained in Marlborough Road and continued working as an under-porter at Christ Church until 1931. He then received a pension with light duties, became a porter at the college's Meadow Gate Building and finally retired in January 1946, after almost 40 years of service to the college. He died later that year aged 81.

Edward's half-sister Daisy lived to the age of 76; she died in Oxford in March 1981. His half-brother William became an electrician. In June 1935, when he was 24, he married Violet Harris, a bookbinder from Friar's Wharf, at St Matthew's church.

With thanks to Judith Curthoys (Archivist at Christ Church) for additional information.