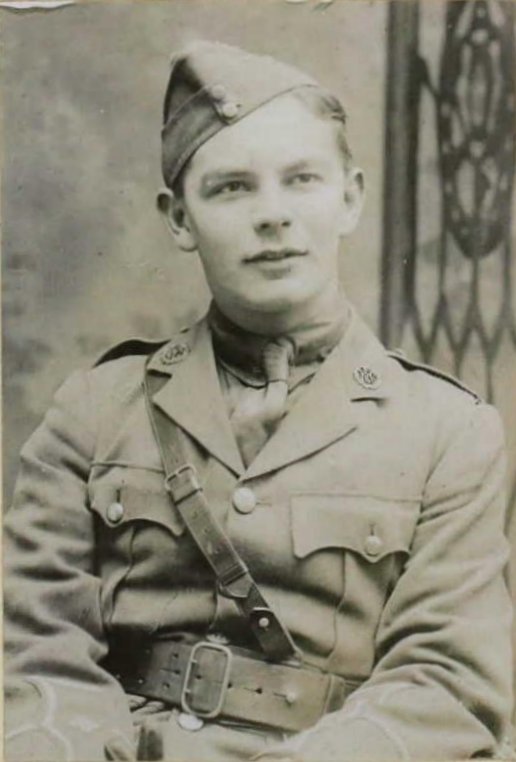 Fred enlisted on 23 May 1917, twelve days after his 18th birthday. He joined the Royal Flying Corps (service no. 82141) and on 20 June was sent to Denham 5 School of Aeronautics in Buckinghamshire for preliminary cadet training. On 10 August he was sent to Oxford for further cadet training at the 2 School of Military Aeronautics which had commandeered rooms at the University Museum, Pembroke, Christ Church and five other colleges. He was discharged from the Recruits Depot at South Farnborough on 26 September 1917 as a Third Class Air Mechanic. His records show that he was 5'8" tall, with a 35½"chest, and that he was considered to be of good character, keen and efficient. He was appointed to a temporary commission as Second Lieutenant (on probation) with the Royal Flying Corps, and on 29 September 1917 he was sent to 2 Training School in Northolt, in Ruislip, west of London.

Fred took his flying certificate there in a Maurice Farman biplane on 12 November 1917. Two days later he was sent to 3 Training School at Shoreham in Sussex. He was accepted as a Flying Officer on 19 February 1918 and went to the join the Scout Pool of pilots at Manston Airfield on the Isle of Thanet in Kent. Here he was killed in a flying accident on 26 March 1918, aged 18. According to the inquest report sent to his father Albert, Fred had been performing stunt rolls when his machine fell to the ground on its back. It was a Sopwith Camel - tricky to fly but once mastered, very potent. The plane, in grim jest, was said to offer a choice between 'a wooden cross, the Red Cross and a Victoria Cross'.

It's not clear why Fred was commemorated on the St Matthew's memorial. He trained briefly in Oxford in August and September 1917, and before he enlisted, in January 1917, he was reported as having rescued a woman from drowning in the River Thames near Folly Bridge. He was awarded a certificate from the Royal Humane Society for his bravery, presented to him by the Mayor of Oxford. It's possible that he had relatives in Grandpont with whom he was staying at the time, and that they later asked for him to be commemorated on the St Matthew's memorial. However, there are no local Pullens (or Dykes, his mother's family) listed in contemporary street directories.

With thanks to Peter Smith for additional information.