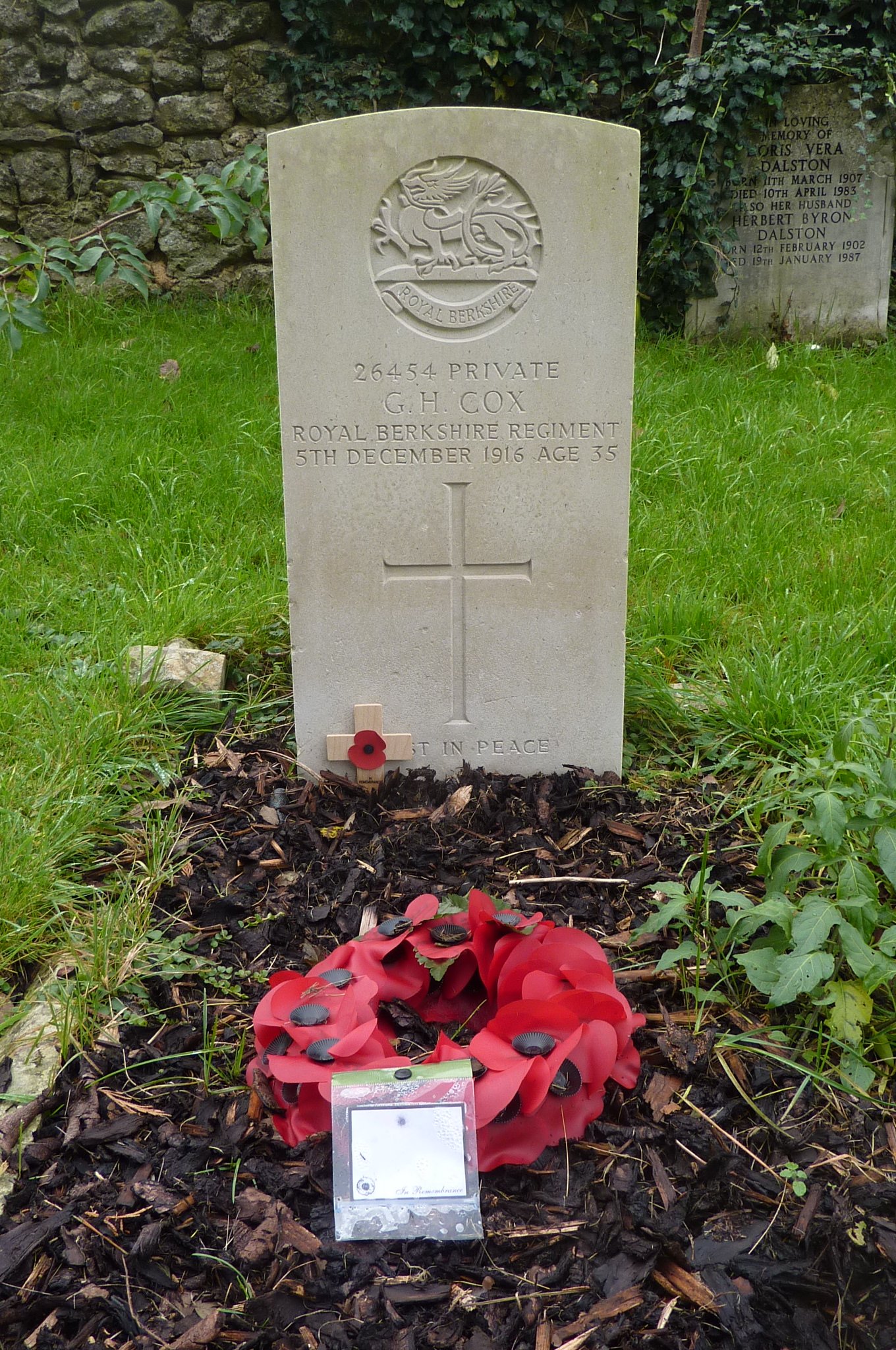 George Cox was born in the spring of 1883 in Asthall near Witney, the only child of William and Mary Cox. William had been born in Brize Norton in 1848/49 and began his working life as an agricultural labourer. In late 1871 he married Sarah Jane Lanchbury (or Lainchbury), who was 20 and from South Leigh. They lived in Brize Norton and had two children - Elizabeth (born 1872/73) and John (born 1877/78) (George's half siblings). Sarah died in early 1880 aged only 28. William (aged 31) moved to Lyneham (near Chipping Norton) with is two young children (aged 7 and 2) and with his 37-year-old spinster sister-in-law Ann Lainchbury, who acted as housekeeper. William was working as a shepherd.

William married his second wife, Mary Kears (or Kearse), in Witney in late 1881. She had been born in 1846/47 in Leafield (near Witney) and had also been widowed. She had two daughters from her first marriage, both born in Shipton- or Milton-under-Wychwood: Ann (born 1871) and Alice Elizabeth (1873). William and Mary moved to Asthall and in the spring of 1883 their son George was born.

In 1891 they were living in Fulbrook (near Witney) with Mary's daughters (now aged 20 and 17; Ann was working as a domestic servant), his son John (now aged 13, and working as a farm labourer) and their own son George (aged 8). William was working as an insurance agent.

By 1901 George's mother had died and hence his father William was widowed for a second time. George and William were living in Burford, lodging on the High Street in the house of a groom and gardener called William Constable, who had been born in Brize Norton (and hence William may have known him from there). William Cox (now aged 52) was working as a porter to a railway agent and George (now 18) appears to have been doing the same job.

In the summer of 1904, when he was 21, George married Fanny Greenway (or Greenaway) in Witney. She was four years his senior and had been born in Naunton (between Stow-on-the-Wold and Cheltenham in Gloucestershire), the daughter of a carter. The couple moved to Ducklington, near Witney, and had a son, Frank, in 1905/06. By 1910 they had moved to Oxford and were living in a house called 'the Haven' at the far southern end of the Abingdon Road (near the Revell family), in the area known as Cold Harbour in the parish of South Hinksey. A second son Arold [sic] was born in 1909/10.

George's father William died in early 1911 in Chipping Norton, aged 62. George and his young family were living on the Abingdon Road in Cold Harbour and he was working as a groom and gardener, probably at a large house nearby.

George joined the 11th (Labour) Battalion of the Royal Berkshire Regiment which was formed at Parkhurst on the Isle of Wight in June 1916 and quickly moved to France on 24 July. He died of an illness in the following December, aged 33, whilst serving at the Regiment's depot, most probably in Reading in Berkshire. His body was returned to Oxford and he is buried in the churchyard of St Laurence, South Hinksey. He was 33 but his gravestone wrongly gives his age as 35. He is commemorated both on the St Matthew's war memorial and on the memorial in the church of St John the Evangelist, New Hinksey (the daughter church of St Laurence).

George's widow Fanny remained at the Haven in Cold Harbour, seemingly until her death in 1941 at the age of 62. She never remarried.

Red Cottage, sideways on to the far southern end of the Abingdon Road. The building to the right of it was the Haven, home of the Cox family, and then the small white building with the steep gable was Alfred Revell's butcher's shop, and later a cycle repair shop. Opposite was Touchwoods Sports (now Go Outdoors). Photograph taken in 1981, from Carole Newbigging, The Changing Faces of South Oxford and South Hinksey, Book 3 (Robert Boyd Publications, 2003). (Click on image to close) 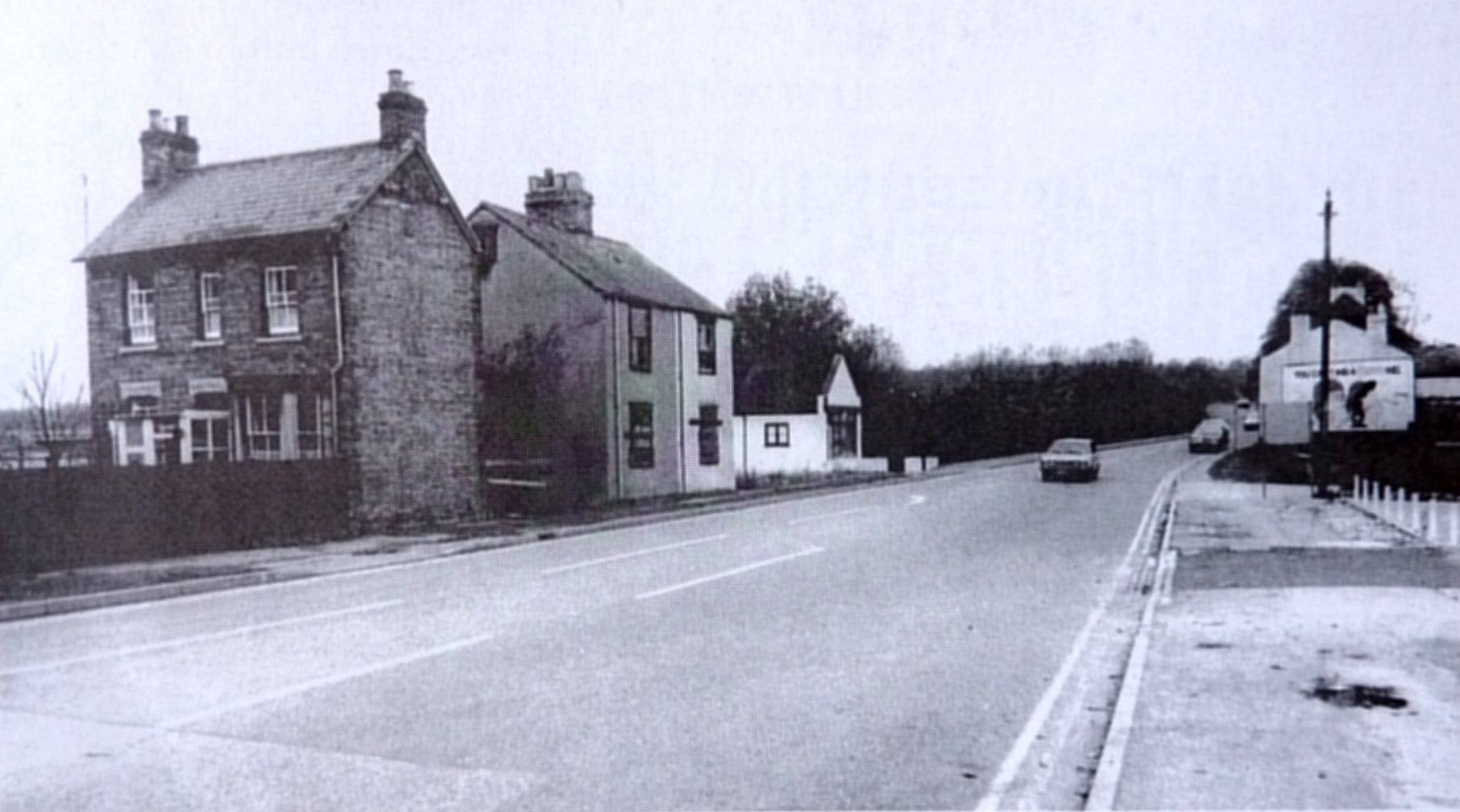