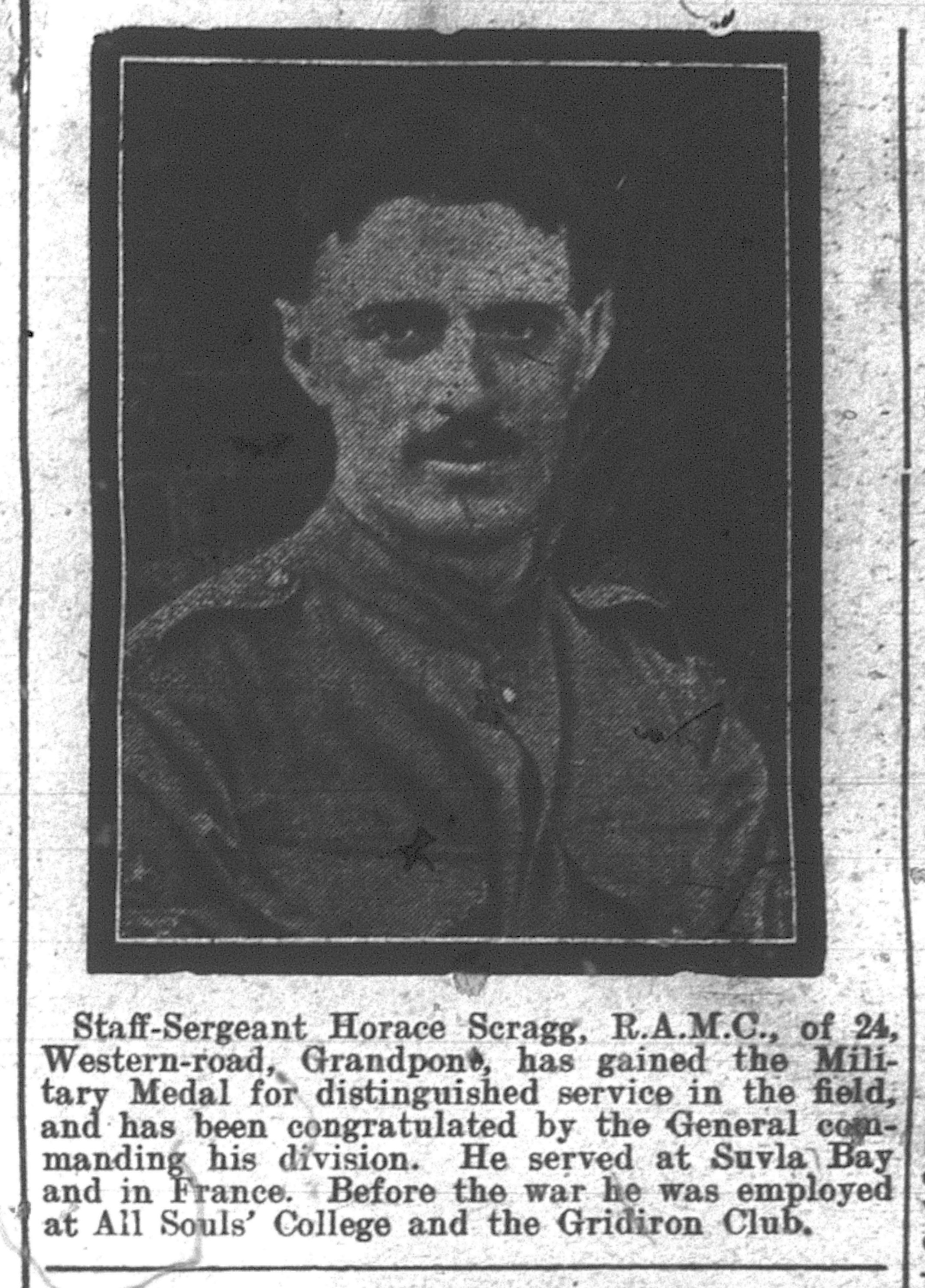 Horace Scragg was born in late 1889 to Samuel and Ellen Scragg. Samuel was a tailor, born in 1850/51, who had previously been married to a woman called Harriet Frances (née Gardiner). She died after only three years of marriage, in the summer of 1879 aged 28, and Samuel married Ellen (or Madeline Maria) Stibbs in the winter of 1888. Horace was born a year later.

Samuel died in January 1891, aged only 41, when Horace was an infant. The couple's second son, Reginald, was born after his father's death, in March 1891. At this time Mrs Scragg (now a widow of 35) was living at 23 Buckingham Street in Grandpont, and Samuel's 9-year-old niece Rose Scragg [who is incorrectly recorded in the census as Ellen's daughter] was staying with her, perhaps to help out with the two small boys.

By 1901 the family had moved to 24 Marlborough Road. Mrs Scragg was a dressmaker. Horace became a college servant at All Souls in around 1904, when he was about 15. He appears to have lived in college, possibly in the attic area of the Warden's lodgings - the Warden William Anson had about 12 servants at this time who may have lived in. Horace was paid 15s a week, probably in addition to his board and lodging. His brother Reginald also appears to have become a college servant, though it's not clear at which college.

Horace enlisted with the army in Oxford on 3 March 1909, aged 19 years and 6 months. According to his army records he was 5' 7" and in good health. He joined the Royal Army Medical Corps (RAMC) and in 1911 was a Sergeant (service no. 435585), stationed at the Royal Victoria Hospital at Netley near Southampton, together with his younger brother Reginald (a Private), Reginald Robinson, and 31 other recruits from Oxford, all in the RAMC. By this time Horace and Reginald's mother Ellen had moved to 21 Western Road and become a college servant herself. Her two sons must have spent time back in Oxford because in 1911 they were both playing for the Grandpont Swifts Football Club.

Horace was promoted to Staff Sergeant on 3 August 1914. He was posted to Gallipoli in Turkey on 19 September 1915 and served in the 41st Field Ambulance [a mobile front line medical unit, not a vehicle] at Sulva Bay. Thereafter he served in Cairo and in Abyssinia (Ethiopia). He returned to England in April 1916 and in July 1917 was serving with the 1st South Midland Field Ambulance. This was posted to Belgium, and Horace was killed on 9 October 1917, aged 28, during the Battle of Poelcapelle, one of the allied offensives to drive back the Germans during the Third Battle of Ypres, popularly known as Passchendaele. His body was never recovered, but he is named on the Wall of Remembrance at the Tyne Cot Memorial in West Vlaanderen, which bears the names of almost 35,000 officers and men who died in the Ypres Salient and whose graves are not known.

Horace was posthumously awarded the Military Medal for bravery in the field. There is a letter in his army file from CA Walker on behalf of Mrs Scragg asking for his medal to be posted as she was too unwell to receive it in public. By now she had moved to 24 Western Road. Horace's property, recovered and recorded three days after his death, included a letter, a damaged watch, a mirror, ash tray, badge, buttons, filters, brush, and a pocket book.

Horace's mother Ellen never remarried and she died in Oxford on Christmas day 1925, aged 71. Horace's younger brother Reginald lodged with their mother at 21 Western Road during 1914 and 1915 (paying her a rent of 5s a week for a furnished bedroom) but by 1918 he was absent from home (according to the electoral register) and away fighting. He was a Private with 331st Field Ambulance in the Royal Army Medical Corps (service no. 450006). He survived, and married Gertrude Turner in late 1921. They lived in the family home at 24 Western Road and had a daughter, Norah Christine, who was baptised at St Matthew's church in February 1930. In 1926 Reginald was appointed as a messenger at Exeter College, and in 1931 he became a bedmaker. He was still working for the College in 1935. In 1965, Norah married Barry Perry, an inspector at the MG car factory in Abingdon. She was 35 and working as a lab technician; the wedding took place at St Matthew's church. Reginald died in Abingdon in 1975, aged 84.