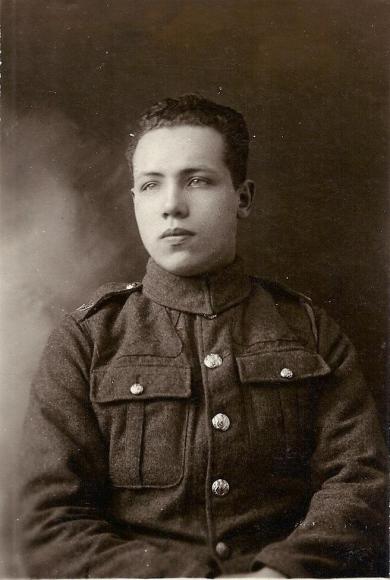 William (or Billy or Willie) Richardson was born in the summer of 1899 in Bicester, the only son of Ernest and Louisa Richardson. Ernest was a butcher who had been born in Stratton Audley near Bicester in 1871, and who came from a family of prominent Wesleyan Methodists. Louisa (née Payne) had been born in Nash near Buckingham in 1872. The couple married in Bicester in 1896 and lived at 193 Crumps Butts. They had three children: Mabel Eleanor (born in 1897), William (1899) and Elsie Mary (1903). By 1911 the family were living at 83 Sheep Street in Bicester. On leaving school William worked for a local hairdresser, Mr A Harris.

William enlisted in High Wycombe in late 1917 and became a Lance Corporal with the 2nd/7th Battalion of the Royal Warwickshire Regiment, service no. 26856. His battalion was sent to France and he was killed in the last month of the War, on 24 October 1918, during the Allies' final advance through France. The 2nd/7th Battalion had moved towards the village of Sommaing, north-east of Cambrai. The assault was successful and the village was captured the following day. The battalion crossed the River Ecallion during the assault, an indication of the ‘open warfare’ which had now been re-established.

William was 19 when he died. He was buried at the Canonne Farm British Cemetery, Sommaing. On his gravestone is inscribed 'Death divides / but love and memory / cling forever' at the request of his mother. His death was reported in the Bicester Advertiser on 22 November. He is also commemorated on the gravestone of his grandparents, William and Hannah Richardson, and uncle, William Richardson, which is in the Non-conformist section of Bicester Cemetery; on the war memorial in Bicester's Methodist Church; and on the town's war memorial which is in the graveyard of St Edburg's Church. William's parents moved to 31 Edith Road in Grandpont, Oxford, in 1916 or 1917, and although he may not have lived there himself, this seems to be why he is commemorated on the St Matthew's war memorial.

On the British Legion's Everyone Remembered website Jo Swigoniak has written:

"My Grandmother wrote to Billy during WW1, her letters and photograph from him have only just come to light. He was known to her daughter as the love of her life. It seems only fitting that he should be remembered, as like many young soldiers he was the only son of Mr & Mrs Richardson, in my Grandmothers letters was also a letter from his mother, thanking my Grandmother for her kind words on the news of his death."