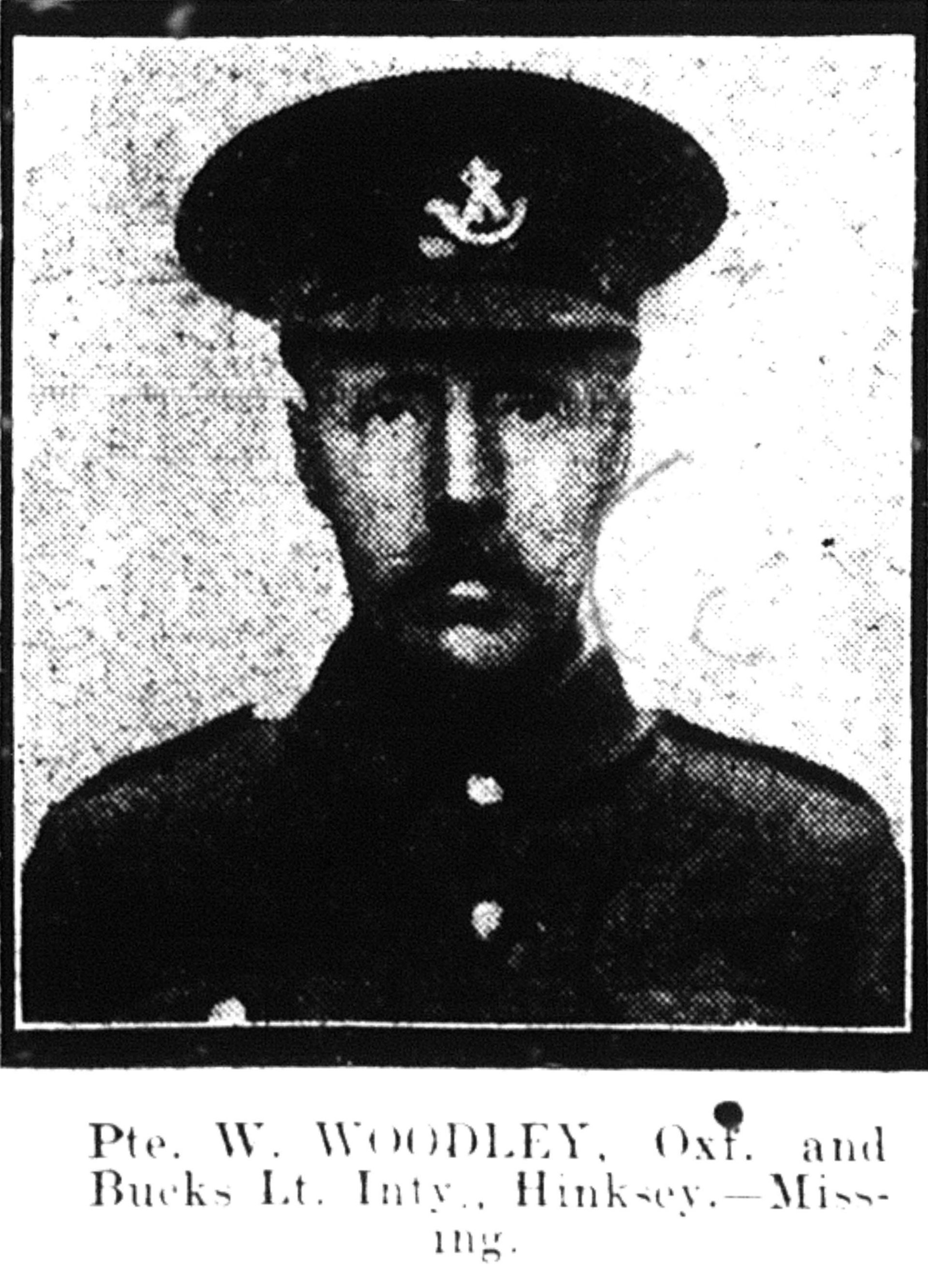 Image from the Oxford Journal Illustrated, 11 July 1917, p.6. The caption says that Pte Woodley was 'Missing' but in fact he had been killed 11 months earlier.

William Woodley was born in St Ebbe's on 15 January 1884 and baptised at Holy Trinity Church on 27 February. He was the son of William and Mary Elizabeth Woodley and the brother of Frederick Woodley.

The boys' father William senior had been born in Chesham, Buckinghamshire, in 1861, but had moved to Oxford by 1881 and was lodging at 3 Sadler's Yard in St Ebbe's, working as a rag sorter. In February 1882 he married Mary Elizabeth Hayes in St Peter le Bailey church on New Inn Hall Street. Mary (also known by her second name of Elizabeth) had been born in 1859 and brought up in the Oxford parish of St Thomas's, to the west of the city centre. At the time of her marriage, at the age of 22, she was living in Victoria Place off Queen Street.

By 1891 William and Mary were living at 74 Blackfriars Road in St Ebbe's; William had become a coal dealer, and they had six children under the age of nine - Louisa Elizabeth (also known as Elizabeth Louisa, born 1882/83), William (1884), Jane (1885), John (1886), Percy (1887/88) and Ethel (1891). Their oldest child Elizabeth Louisa married a labourer, John Hill, at Holy Trinity church in St Ebbe's on 26 December 1900, when she was 18. At this time her father William was working as a marine store dealer [someone who dealt in, and recycled, waste materials]. Elizabeth and John went to live in his home town of Twyford in Buckinghamshire.

By 1901 the Woodley family were living at 80 Blackfriars Road (though this was probably the same house, renumbered) and five more children had been born - Frederick Arthur (born 1893, and staying with his newly-married sister Elizabeth in Twyford in 1901), Arthur James (born 1895), Horace Olave (1896/97), James Albert (1898, but died the following year) and Lilian (or Lily) Violet (1899/1900). William senior had returned to the rag trade, as a rag dealer, and his sons William junior (now aged 17) and John (aged 15) were working with him.

By 1911 the family had moved to 8 Charles Street in St Ebbe's. William and Mary had had 13 children in total, three of whom had died in infancy, including James. Ten of their children were still alive and seven were still living at home, including William and Frederick. William senior, William junior and John were now all working as general labourers; Frederick was a labourer for a coal business. Also living with the family was 1-month old Louis Bollenbacher Woodley, William and Mary's grandson - perhaps the illegitimate son of their daughter Ethel (aged 19).

The family moved to 44 Church Street, now Vicarage Lane, in New Hinksey in 1915. By this time, however, William junior had moved across the river and was living with a woman called Annie Louisa Yeates (or Yates) at 8 West View Cottages (or 8 New Iffley, now Arnold Road off what is now Donnington Bridge Road). Annie (née New) was in her early forties and ten years older than William; she came originally from Wootton (then in Berkshire) and was married to - though apparently estranged from - a mat maker called Ernest Yates. They had had ten children, eight of whom had died. In 1911 Annie was working as a charwoman and living in Abingdon with her two surviving children, Ernest (aged 15, working as a carrier's boy) and Emily (aged 4). Annie moved to Oxford and in June 1914 she and William Woodley had a daughter, Florence, who was baptised at St Mary's Church in Iffley on 2 August; William was working as a labourer at the time.

William enlisted in November 1915 at the age of 31, giving his home address as that of his parents in New Hinksey, rather than that of his partner and child in New Iffley. He joined the 1/4 Battalion of the Oxf & Bucks Light Infantry as a Private, service no. 202332; his younger brother Frederick had joined the same battalion a few months earlier. They were both sent to France and here they participated in the Battle of the Somme north of Ovillers, the battalion pushing back the enemy with the use of ‘bombs’ (grenades). This involved clearing the Germans’ communication trenches by using a greater weight of bombs than the enemy, and working forward. Both William and Frederick were declared missing after heavy shellfire on the trenches east of Ovillers on 13 August 1916. William was 32 and Frederick was 22. Several months later they were designated as 'killed in action'. Both are commemorated on the Thiepval Memorial, the memorial to the Missing of the Somme which bears the names of more than 72,000 officers and men of the United Kingdom and South African forces who died in the Somme sector and have no known grave. Frederick's body was never recovered, but eventually William's body was found; it was exhumed and reburied at the London Cemetery and Extension, Longueval in March 1934. 'Until we meet again / not dead but sleeping’ was carved on his headstone at his mother’s request.

Both William and Frederick are named on the WWI memorial in the church of St John the Evangelist, New Hinksey (though Frederick is listed as Arthur F Woodley). William is also named on the WWI memorial in the church of St Mary the Virgin in Iffley; Annie Yeates, the mother of his daughter Florence, was still living at 8 West View Cottages, New Iffley, in 1918, and sometimes used the surname Woodley. After William's death two payments were made by the government to Annie, one of them 'for child Florence'. Annie Yeates/Woodley lived at 8 West View Cottages until around 1934. She then moved to East Oxford; in 1939 she was living at 24 Princes Street with Florence who had married a man called Francis Lock the year before. Annie died in Oxford in late 1949, aged 74, and was buried at Rose Hill Cemetery.

William's parents moved to 236 Marlborough Road in 1919 which probably explains why he and his brother Frederick are named on the St Matthew's memorial. In July 1920 their sister Lily (aged 20) married William Plumley, a farm labourer from Old Marston, at St Matthew's church.

With thanks to Barry Burnham and to Chris Plumley, great nephew of William and Frederick Woodley, for additional information.