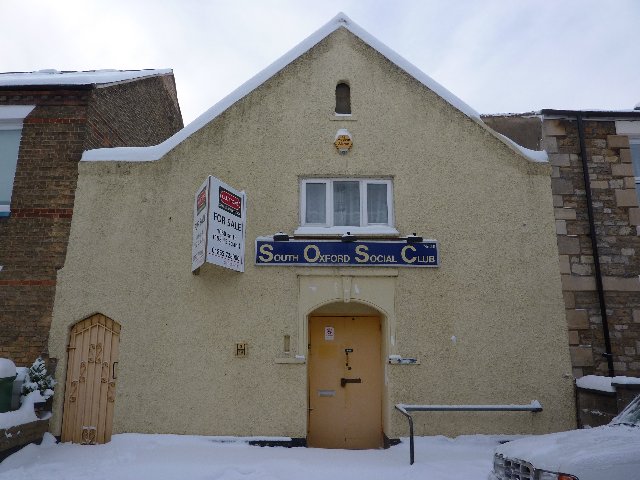 Gorden Street Methodist chapel in 2010, for sale after it had closed as the South Oxford Social Club.

This chapel was built in 1882. In the early 1880s the Wesleyan Methodists, the largest of Oxford’s three Methodist denominations, were reaching out from their city centre base in New Inn Hall Street to the expanding suburbs, at the initiative of the new Superintendent Minister Hugh Price Hughes. Revd Price Hughes had arrived in Oxford in 1881 and oversaw a revival in Methodism here; he organized an eight-day house-to-house mission to the city, sent younger members of the congregation in 'gospel chariots' to outlying villages, attempted a reconciliation with the United Methodist Free Church, and made temperance an essential feature of church work. In his first year membership of the congregation rose by over 40%. A plan for extension was officially launched in June 1882, with schemes for new chapels in Jericho, St Clements and New Hinksey. Fundraising for the New Hinksey chapel - which was to be built on what was then Cross Street (now Gordon Street) - was led by Revd Price Hughes's wife Katherine. JC Gray, a local architect, designed the chapel, which opened in October 1882. Jackson’s Oxford Journal gave this description on 14 October 1882:

‘In Cross-street, New Hincksey, the Wesleyans have erected a Mission Room suited to this growing suburb of Oxford. The walls are constructed of red and white bricks, relieved with bands, and the roof covered with blue slates; size of room – 35 ft long, 20 ft wide, and 15 ft high to centre part of ceiling. A large gable faces the street, in which is a bold iron semicircular-headed window, filled in with tinted cathedral glass. The seats and rostrum are constructed with pitch pine, stained and varnished, and a dado of match boarding runs all round the wall, about five feet high. A vestry etc, is provided in the rear, and provision is made for heating the room in winter by means of a stove, a chimney having been formed outside of room for same.’

The chapel closed as a Methodist place of worship in 1940 and was used during the remainder of the Second World War by the South Oxford Civil Defence Club. This later became the South Oxford Social Club. It closed as a social club in 2010 and is now a private dwelling.

The information on this page was largely supplied by Revd Dr Martin Wellings, former Superintendent Minister of the Wesley Memorial Church in New Inn Hall Street.