The city corporation waterworks opened at Lake Street in 1856. The surroundings of pumping stations were often landscaped to inspire ideas of cleanliness, purity and confidence in the public water supply, and what is now Hinksey Park began life as the landscaped grounds of Oxford's waterworks. In 1902 the eastern section of the grounds nearest Abingdon Road (known as Hinksey Step) was handed over to the Corporation’s Playground Committee (and is still the site of a playground and sports field today). The rest of the grounds were opened to the public in the 1920s and when the waterworks closed in 1934 they were given to the city to form a public park, sometimes known as Jubilee Park, because it opened in the year of George V's silver jubilee. In 1936 the former filter beds of the waterworks were converted into swimming and paddling pools, known as the Jubilee Pools. What had been the cooling pond became a boating lake. The large inlet pipe which fed water from Hinksey Lake into the swimming pools is still in place, just to the west of the Community Centre. 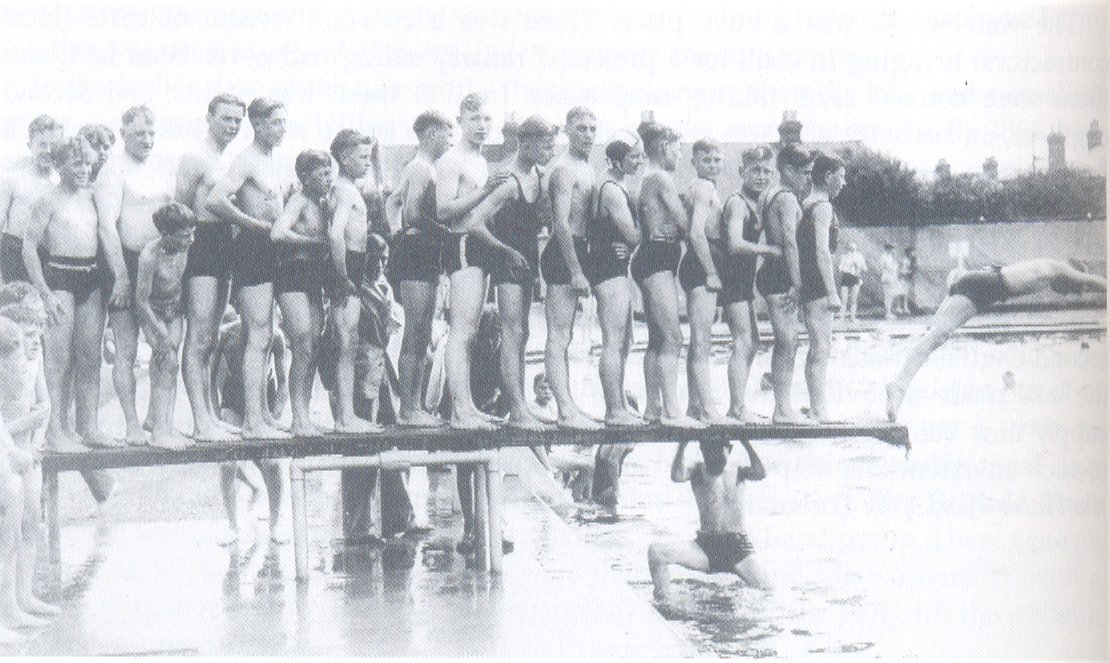 The opening of the diving board at Hinksey Pools in 1936. Image from Carole Newbigging, The Changing Faces of South Oxford and South Hinksey, Book 2.

The swimming pools had no fence around them, and it was free to swim there. (Eventually charges were introduced - in 1960 it was 1 shilling [5p] for adults and 6 old pence [2½p] for children, though children could swim for free before 1pm). The pools were unheated, but that didn't put children off. The pools became a very popular recreational facility for local people and for those from further afield, who would come for the whole day to swim and to picnic in the park. 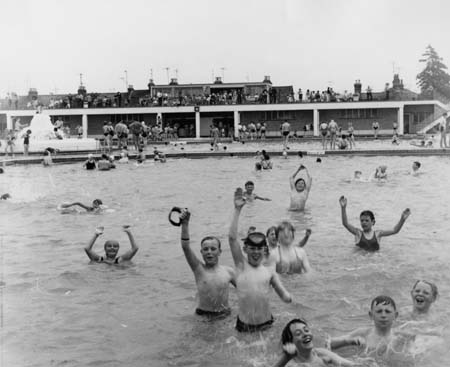 Originally there were no changing facilities, but later dressing rooms were added. One local resident recalled 'First of all there were open dressing rooms, just a big open room with seats around, one for ladies and one for men. I remember Hinksey Pools as four pools, filled up from the lake. Two old boys, who were also the lifeguards, used to empty and scrub all around the pools with brooms. After the War, two of the pools were made into one large one.'

Later individual changing huts were added, and above them was a balcony. A roof-top café was added in 1960, though it was removed again in the late 1970s. The pools were open from 1st May until 30th September, but in 1980 problems with the water supply and poor weather led to the season being restricted to only 20 weeks. In 1990 the season was further reduced to only 6 weeks, and then in 1994 the filtration system failed to meet hygiene requirements and the pools were closed. They underwent extensive refurbishment and re-opened, heated, in 1997.

In 1935 a remarkably ambitious plan was put forward to build indoor 'Gala Baths' on part of Hinksey Park, fronting on to the Abingdon Road and separate from the outdoor pools nearby. The main pool would have been 120' (36.5m) long and 42' (12.8m) wide. The scheme was approved by the City Council in 1937 but must have later fallen foul of spending cuts, as sadly it was never realised. You can see parts of the plans here and here.

Part of the plan of the proposed Gala Baths at Hinksey Park, 7 October 1935.
Reproduced by kind permission of Oxford City Council, ref: 15516. (Click on image to close) 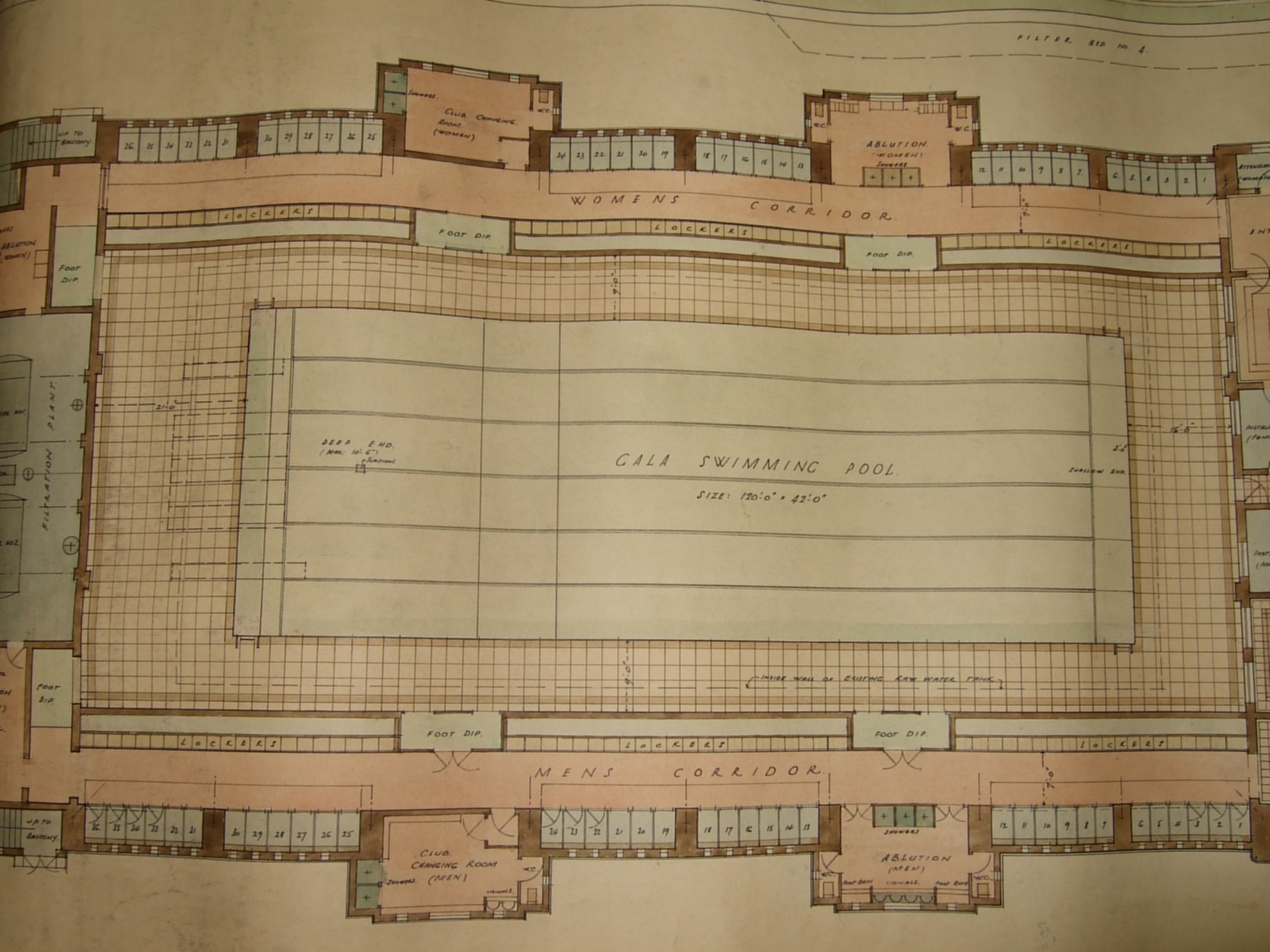 Part of the front elevation of the proposed Gala Baths at Hinksey Park, 12 October 1935.
Reproduced by kind permission of Oxford City Council, ref: 15516. (Click on image to close) 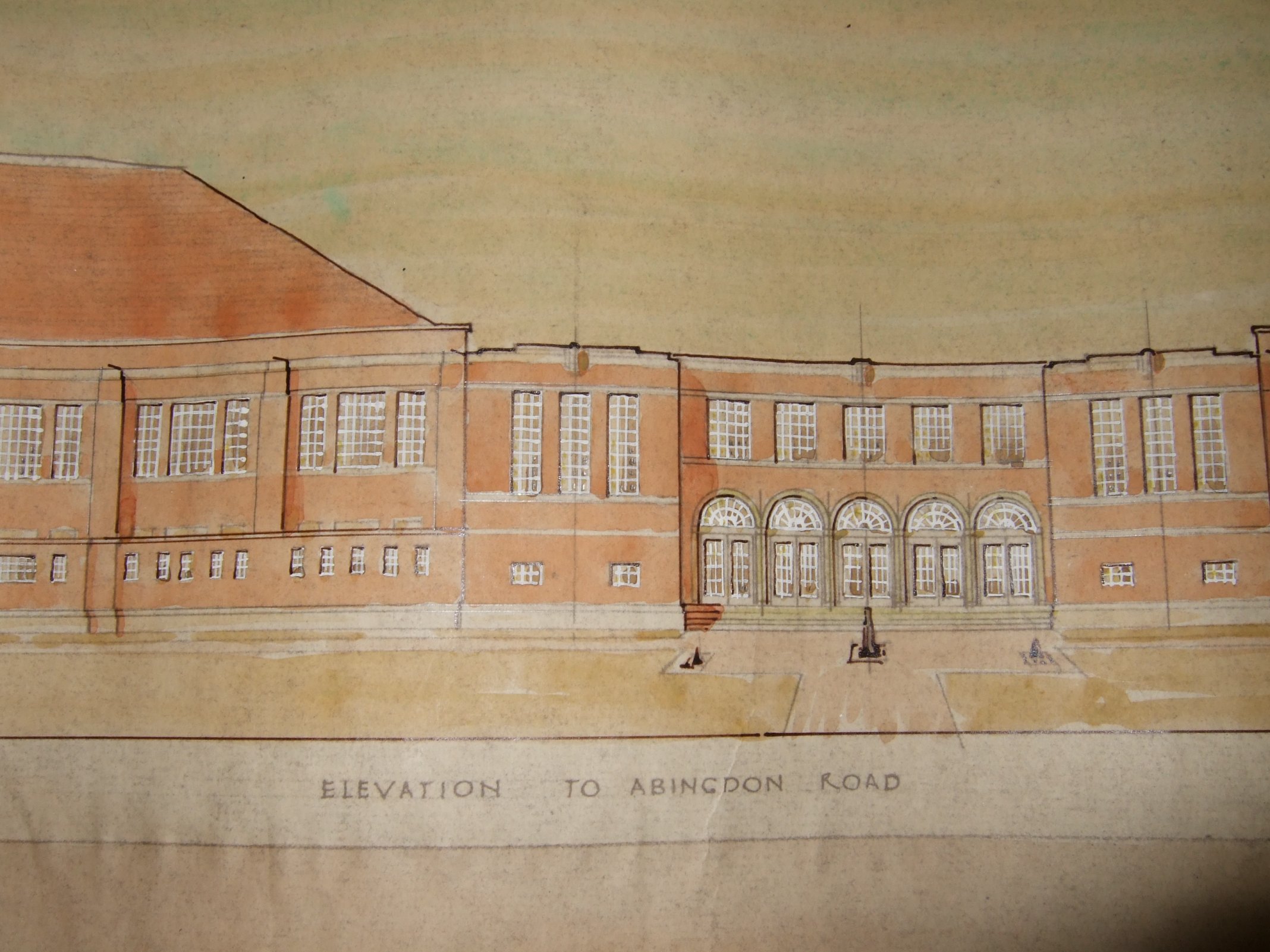