Originally known as North Hinksey House, this building was erected on Folly Bridge Island in 1849 for Joseph Caudwell, an eccentric Oxford accountant who perhaps planned it as a folly to match the existing name of the bridge. 'Caudwell’s Castle' soon attracted unwanted attention from high-spirited undergraduates, one of whom was shot and seriously hurt by Caudwell in 1851 while trying to drag one of the cannons that sat on the forecourt into the river. At his subsequent trial Caudwell was found not guilty after his counsel made much of the malicious intent of the students who '...after luxuriating at a cricket club supper at the Maidenhead, smoking cigars and drinking beer, sallied forth, and in order to fill up or rather to kill time, proceeded to this man’s house for wanton mischief, and to despoil his premises, for the sake of gratifying a morbid and wicked disposition'.

The building features an interesting variety of windows and a number of plaster statues including, on the roof of the roadside facade, Atlas, who has unfortunately lost his globe. On the ground floor below him you can see what was originally the front door, now bricked up, with the forecourt in front of it (but no cannons). 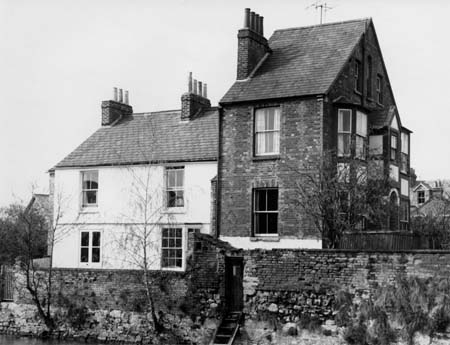 4 Folly Bridge Island prior to crenulation in 1974.

Just to the west of Caudwell's Castle is 4 Folly Bridge Island which was built in 1875 and designed by the Oxford architect George Shirley. As this old photograph shows, it originally had a steeply-pitched roof, but the upper storey was rebuilt and crenelated in 1974. If you stand on the towpath at the end of Codben Crescent, and look at the back of the house, you can see the old roof-line and the outline of where the chimneys used to be.

To the south of Caudwell's Castle, across the river on a small triangle of land beside one arch of Folly Bridge, was a public lavatory. It can be seen marked 'Lav' at the centre of this extract from the 1939 Ordnance Survey map ['FB' means 'footbridge']. This small brick building still exists, though it is more-or-less invisible as it is totally overgrown with ivy and has two large willow trees immediately beside it. However, the gate to it in the iron railings, just to the west of the pedestrian crossing over the Abingdon Road, can still be seen.