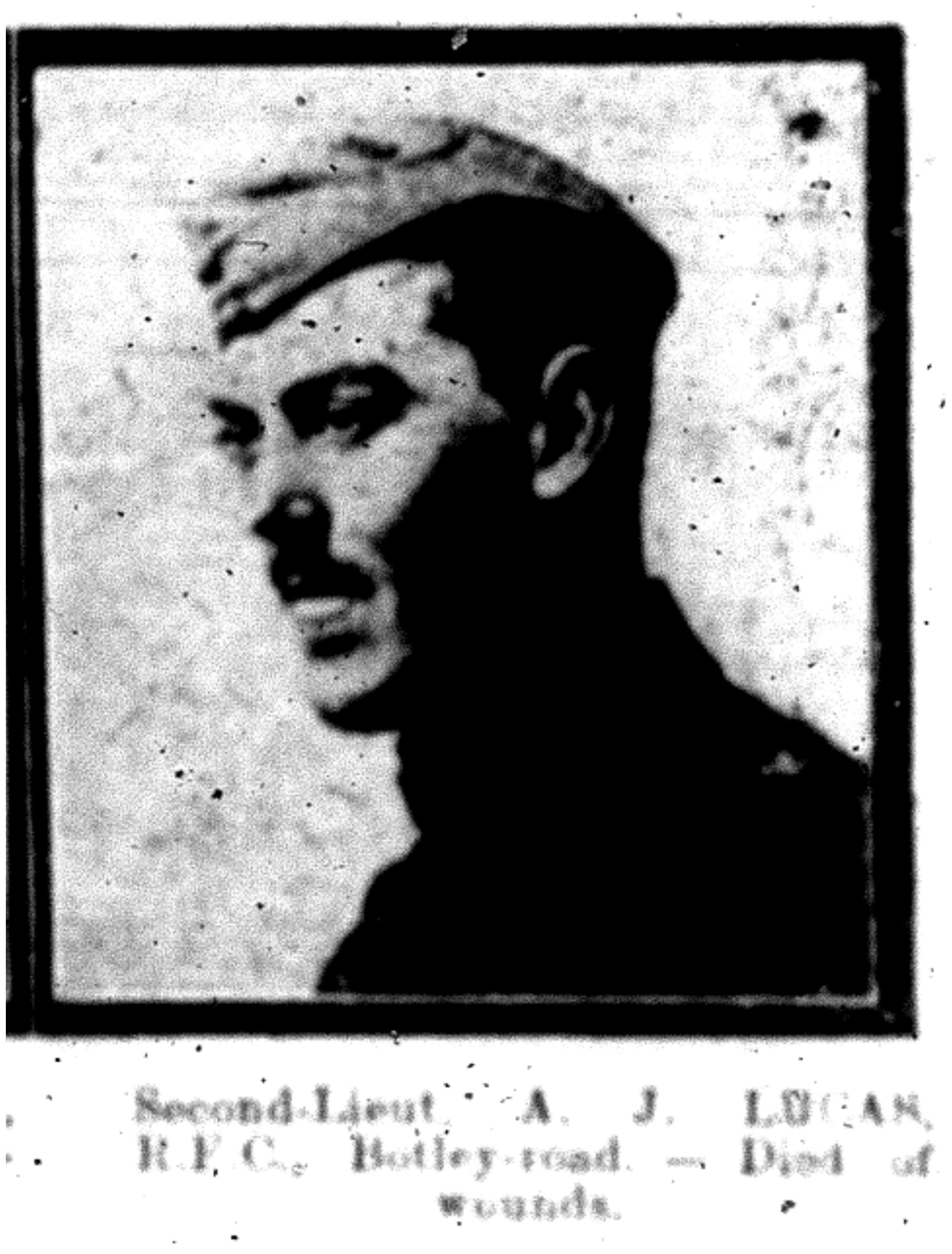 Albert (known as Bertie) Lucas is also commemorated on the St Frideswide war memorial, and some of the information below comes from their website.

Albert Lucas was born on 9 September 1894 in Oxford, the eldest child of John Butler Lucas and his wife Mary Bate Lucas. John had been born in Paddington in London in late 1868 or early 1869 and moved to Oxford with his parents in about 1876. He followed his father Albert into the hide and skin brokerage business and in 1891 he was living in Park End Place with his sister, mother and stepfather, who was a butcher and dealer. This was the part of Oxford known for hide and skin dealers, and the cattle market was at nearby Gloucester Green. The family may have been related to that of Thomas Lucas, later mayor of Oxford.

In April 1893, when he was 24, John married Mary Bate Shutt, a 29-year-old farmer's daughter from Worcestershire, at St Mary's church in Hammersmith in London. By this time John and his family were living at 10 Stanley Terrace, now 106 Abingdon Road [between Newton and Edith Roads], and Mary was living at 12 Percy Street in east Oxford. The couple moved to 12 Abbey Road off the Botley Road and had four children: Albert (or Bertie, born 1894); Alice (1896); Hilda (December 1900); and Doris (October 1902). Alice died in 1900, at the age of four. Hilda and Doris were baptised at St Thomas's church.

In 1901 the family was still living at 12 Abbey Road, with one servant. Bertie probably had his early education at a local school, but in January 1903, when he was nine, he went to the City of Oxford Boys’ High School in George Street where he was a contemporary of Vernon Venables. He stayed less than two years, until December 1904, and then went to Magdalen College School in Brackley, Northamptonshire.

By 1910 the family had moved to a large house called Sunnyside, on the corner of the Botley Road and Binsey Lane (then no. 66 but now numbered 92). Bertie’s parents were living there with his surviving sisters Hilda and Doris, looked after by a lady’s help and a general servant. Bertie's father John was a councillor on the City Corporation and was in partnership as Harrison and Lucas, with a hide and skin brokerage business on Park End Place and a tallow factory on Canal Street in Jericho. Bertie (then aged 16) was away from home, working as an apprentice wool stapler (dealer in wool) and boarding in Worcester.

John died in November 1914, aged 45, at the Warneford Lunatic Asylum in Headington, leaving effects worth over £4,500 (about £200,000 in today's money). His widow Mary married again, at St Frideswide's church, in July 1916, to William Batten Bailey, a widower from St Helen's in Abingdon. She was 50 and he was 92! He was the son of a leather dresser, so he may have had a business connection with Mary's first husband John.

Meanwhile, Bertie had joined the Royal Flying Corps as an air mechanic in 1915. He transferred to a Cadet Battalion the following year. He obtained his commission as a Second Lieutenant in the 66th Squadron (and General List) on 1 August 1916, when he was 21. On the same day he married his first cousin, Violet Cordelia Chauncy, at St Frideswide's church on the Botley Road. Violet was a British citizen but had been born in Buenos Aires in Argentina in December 1893. She was living with her parents at Rochester House on Pembroke Street in Oxford (now part of the Story Museum) and her father Edward worked in 'stock exchange' (possibly meaning livestock dealing, or perhaps the Stock Exchange in London's financial district). Her mother Aimee and Bertie's mother Mary were sisters.

In March 1917 Bertie was sent to France and was wounded on 3 May 1917 whilst flying over the German lines, but succeeded in reaching his aerodrome and making a perfect landing. However, slow blood poisoning set in after the amputation of his leg, and he died in hospital in France on 16 May. He was 22. This obituary appeared in The Oxford Times on the 26 May; he was buried at Warlincourt Halte British Cemetery, Saulty, France.

Bertie and Violet had one child, a daughter Yvonne Margaret (known as Peggy), who was born in London on 18 August 1917, three months after her father's death. She was baptised at St Frideswide's church in Oxford.

Bertie didn't live in the parish of St Matthew's but it seems that he appears on our war memorial because his father and, later, his paternal grandparents, did. John Lucas was living with his parents at 10 Stanley Terrace (now 106 Abingdon Road) at the time of his marriage to Bertie's mother in 1893, and when John's sister Ellen got married the following year, she did so at St Matthew's church [the mayor George Cooper and deputy mayor Walter Gray attended - quite a society wedding!]. John's mother and stepfather Emily and George Walklett still lived at 106 Abingdon Road in the early part of the 20th century. Although George had died by 1911, Emily (Bertie's grandmother) was living two doors down, at 110 Abingdon Road, and remained there throughout the War and until at least 1921.

Bertie is commemorated on the City of Oxford Boys' High School war memorial, together with Vernon Venables, two of Lawrence of Arabia's brothers, and 56 other former pupils who died in the War. On his death Bertie left effects worth just over £1,500 to his widow Violet. She went into partnership with Mary Gaudin to run the Vernon Court Private Hotel in Torquay after her husband’s death, but this partnership was dissolved in October 1921. Violet married her second husband Douglas Shrubsall at St George’s, Hanover Square, London, in early 1932. He died in 1943, and she married her third husband Ashley Courtenay 1947. Violet died in London on 23 February 1954, aged 60.

Bertie and Violet’s daughter Peggy married Derek Ernest Eveleigh in the spring of 1939. He was a pilot, and he died in a plane crash in Scotland a year later, the Air Transport Auxilary's first fatal accident. Peggy joined the Women's Auxiliary Air Force (WAAF) and became a pilot herself, flying 178 hours between February 1944 and September 1945 with the Air Transport Auxilary. She recalled her early experiences in Sisters in Arms: The Women Who Flew in World War II by Helena Page Schrader (see, for example, pp. 92 and 99). Peggy also wrote her own memoir, WAAF with Wings, which was published in 1992. She married her second husband Roger Grace in 1946 and her third, Major Charles Kaiser, in 1952, but it ended in divorce. Her fourth husband was an Austrian, Edouard Stampfer, and they lived in Kitzbuhel, Austria, where Peggy worked for a travel organisation. That marriage also ended in divorce; Peggy reverted to her maiden name of Lucas and moved back to England. She continued flying and became a qualified helicopter pilot when she was 84. She died on 8 January 2008, aged 89, and is buried at St Nicholas Church in Remenham near Henley-on-Thames, under the name Peggy Eveleigh (née Lucas). Her gravestone includes the inscription 'WAAF with Wings'.

Bertie's mother Mary was widowed for a second time when her husband William Bailey died in Oxford at the age of 95 in 1920. She had moved away from the Botley Road by 1928 and she died in Stratford upon Avon in 1952, aged 88.

With thanks to Stephanie Jenkins, Mark Davies and Gary O'Connell (great nephew of Albert Lucas) for additional information.