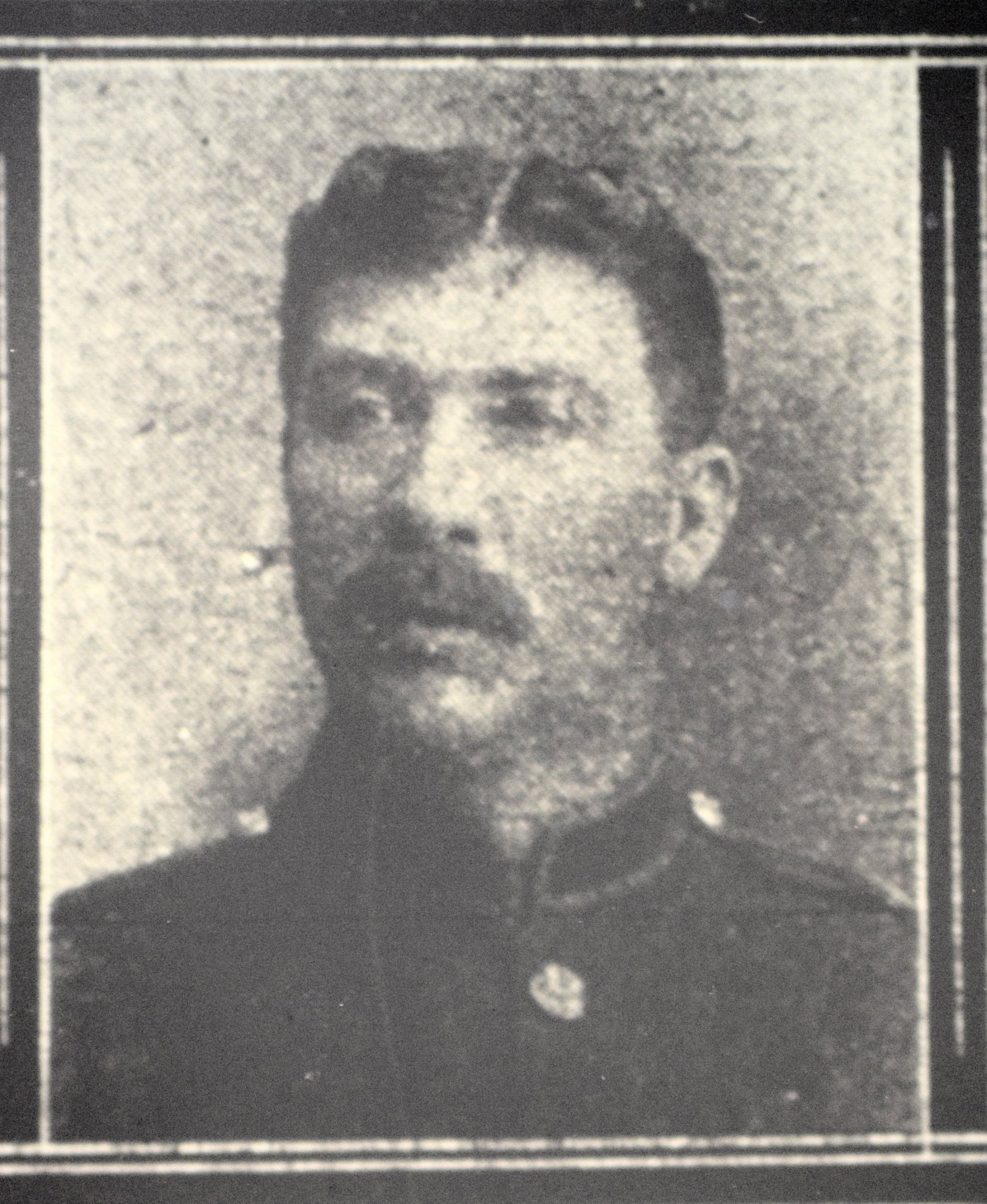 Charles Collett was born on 1 June 1882 in Oxford, the third of the 12 children of Charles John James and Laura Alice Collett whose family history is described here. (Some of the infomation below comes from this website, courtesy of Brian Collett.)

Charles senior had been born in South Hinksey (then in Berkshire) in April 1856 but grew up in English Row off St Aldates. Laura (née Aldridge) had been born in St Thomas's in Oxford in February 1856. The couple married in Dronfield in Derbyshire in January 1875, when they were both 18. Here their first child William was born in May 1877. They returned to Oxford soon afterwards and their second child, Laura, was born in September 1879.

In 1881 the family was living at 2 Shepherds Row off St Aldates and Charles was working as a fireman, tending the furnaces at the nearby St Ebbe's gasworks. Also living with them was Laura's mother, 69-year old Elizabeth Aldridge, the wife of a blacksmith.

In around 1890 the family moved to 218 Marlborough Road, a newly-built house in the expanding suburb of Grandpont. Charles was now working as a stoker at the gasworks, and a further five children had been born: Charles (June 1882); Sarah (October 1884); Edward (June 1886); Catherine (June 1888); and Albert (August 1890). Laura's mother Elizabeth, by now a widow, was still living with them. By 1893 the family had moved next door to 220 Marlborough Road.

On leaving school Charles junior worked as a blacksmith. He was in the 2nd Volunteer Battalion of the Oxf & Bucks Light Infantry and in January 1900, at the age of 18 years and 7 months, he enlisted in the regular army. His attestation (enlistment) papers describe him as being 5'6" tall, weighing 8 stone, with a chest circumference of 33/35", and having brown hair, grey eyes, a fresh complexion and a respectable appearance. The commanding officer of the 7th Queen's Own Oxfordshire Hussars (a cavalry regiment) would not take him as a recruit however, saying 'No thank you, 8 st is not enough'. Instead Charles joined the Rifle Brigade. He was transferred to the Royal Engineers nine months later and became a Sapper with the 11th Field Company, service no. 6798. In 1901 he was sent to South Africa to participate in the Second Boer War. For this he was awarded the South Africa (Queen's) Medal with clasps for service in Cape Colony and the Orange Free State.

Meanwhile in Oxford, by 1901 five more children had been born to Charles's parents: twins George and May (July 1893); Frances (born July 1896; died aged 12); Wilfred (born October 1897) and Alice (December 1899). Charles junior was away in the army, Laura and Sarah had left home and Wilfred was absent on census night, but the house at 220 Marlborough Road contained Charles senior, Laura and eight of their children (aged 1 to 23), plus grandmother Elizabeth, now aged 88. The oldest son William was working as a kitchen porter and Edward was a billiard marker.

In 1907 Charles junior was stationed in Sierra Leone. By 1911 he was serving in Malta and had passed tests to become a 'superior blacksmith'. In October 1913 his army records describe him as 'Latterly sober, a clean smart intelligent and industrious man who has shown a marked improvement in the last year'. He was still in Malta in 1913 and in September 1914 he was described by the Assessing Officer as 'Sober, honest, industrious, clean & hard working, a good man'.

On the outbreak of War Charles was sent to serve with the 2nd Division of the Royal Engineers in Flanders during the period of Winter Warfare 1914-15, as the lines of trenches were becoming established. He died on 11 January 1915 as a result of a bomb explosion in the explosives shed (cause unknown). He was 32. Six others were killed in the accident and 14 were wounded. His parents were informed of his death on 24 January 1915. He was buried at the Le Touret Military Cemetery, Richebourg l’Avoue, south-west of Lille in France.

Four of Charles's brothers also went to fight and they were all pictured, with their father, in the Oxford Journal Illustrated on 10 May 1916 (Charles having already been killed).

Before the War Charles's oldest brother William worked as a labourer and in November 1904 he married Annie Keen at South Hinksey church. He fought during the War, but survived. Later the couple and their five children lived at 37 Marlborough Road.

Charles's next brother Edward did not fight in the War because he had emigrated to New Zealand and he died at Wairau Bar, Blenheim, in July 1912 aged 26. His brother Albert, who in 1911 was working as a college servant at Jesus College, travelled to New Zealand between 1911 and 1914, to join Edward. He found employment as a fisherman with WS Aldridge (who was probably related to his mother) at Wairau Bar. Albert enlisted with the New Zealand Expeditionary Force in December 1914 and during the course of the War he served in Egypt, Gallipoli, Lebanon and France. He also suffered repeated bouts of illness and was in hospital in England on several occasions. In September 1915 he was in Oxford and married Alice Strange at Holy Trinity Church. In September 1918 he was discharged from duty, being 'no longer physically fit for war service, on account of illness contracted on active service'. Albert and Alice settled in New Zealand and had four children. Albert died at the Wairau Hospital in Blenheim in August 1946, aged 56.

Charles's brother George worked as an engine cleaner for the Great Western Railway in Oxford in his late teens but before the War he emigrated to Canada. He served as a Private with the First Canadian Division. In May 1916 he was pictured and reported in the Oxford Journal Illustrated as having been wounded. In 1920 he married an English woman, Henrietta Burwell; they settled in Toronto and had a son. George died there in January 1956, aged 53.

Charles's youngest brother Wilfred was only 16 when War broke out but by May 1916, when he was 18, he was serving in France as a Driver with the 156th Heavy Battery of the Royal Garrison Artillery, service no. 297236. He returned home and married Irene Vincent in 1930. He died in Oxford in 1978 aged 81.

With the brothers away, Charles's sisters remained in Oxford during the War. The eldest, Laura, worked as a laundress and married Frank King; they went to live in Temple Road in Cowley and had five children. Sarah married Charles Wiggins and had three children; they lived next door to Sarah's parents at 222 Marlborough Road. Catherine married Arthur Baughan in around 1907 and went to live at 234 Banbury Road in North Oxford; they had two surviving children. She died in Oxford in 1972 aged 84. George's twin sister May worked as a shirtmaker before following him to Toronto in the early 1920s, with her husband Frederick Poulter. She died there in February 1971 aged 78. Alice married Tom Owen, a company director, and lived at 10 Norreys Avenue. She died in Oxford in 1981 aged 81 or 82.

Charles's parents remained living at 220 Marlborough Road and died within two weeks of each other in March 1932. Laura had just had her 76th birthday and Charles was about to have his. Charles left effects worth £150 to their youngest son Wilfred (then working as a carter). He and Laura were buried at Osney Cemetery.