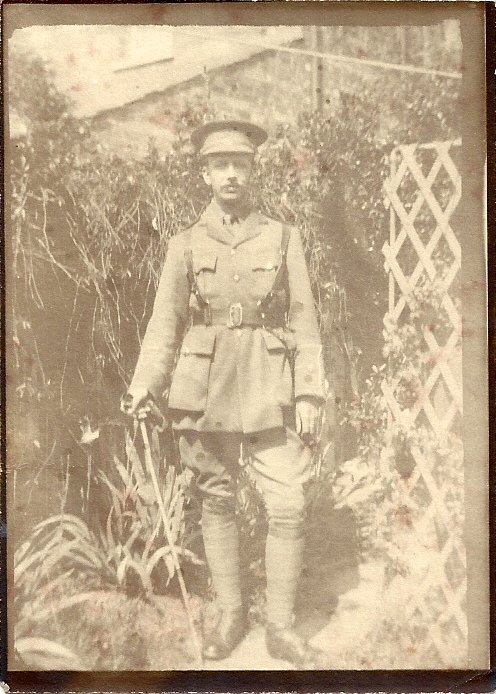 Ernest Brooks in the garden at 7 Whitehouse Road; photo courtesy of Clive Organ.

Ernest Brooks was born at 16 Cambridge Terrace in St Ebbe's on 14 September 1887, and baptised at Holy Trinity Church, St Ebbe's, on 5 October. He was the son of George William Brooks (born in Oxford in 1859/60) and his wife Emma (née Smith, born in Horspath in 1856/57). The couple married in 1885/86 and Ernest was their first child; they subsequently had a daughter, Mary Dorothy (known as Dorothy) who was born on Christmas Eve 1889. George was a college servant at Corpus Christi from at least 1897 until his retirement in 1923.

When the children were small the family lived at 16 Cambridge Terrace but by 1901 they had moved to 7 Whitehouse Road in Grandpont. A woman named Elizabeth Brooks, probably George's sister, lived next door at 5 Whitehouse Road and ran a lodging house there.

Ernest's sister Dorothy was a pupil, and then a pupil teacher [a young trainee teacher], at the Central Girls' School on New Inn Hall Street. In 1909, when she was 20, she became an assistant teacher at the school, in maths, botany and nature studies. Here are some photographs of Dorothy with her pupils and fellow teachers before the First World War.

Ernest also went into teaching; he attended Culham College, the training college for school teachers near Abingdon, from 1907 to 1909, and taught at the Central Boys' School in Gloucester Green at the same time. After finishing at Culham he continued working at the Central Boys' School as an assistant teacher. Here is a photograph of Ernest with his pupils before the First World War. Ernest helped to organise the school's junior football team. He himself was a keen rower and prominent member and secretary of the Neptune Rowing Club, which he represented for several years in Oxford City bumping races and regattas.

In October 1912 Ernest matriculated as a student with the Delegacy for Non-Collegiate Students at the University of Oxford. This had been established in 1868 to allow students to be members of the University without being a member of a college, thus avoiding the (for many) prohibitive costs of an Oxford college. It later became the St Catherine's Society and then St Catherine's College. Whilst a member of the Delegacy for Non-Collegiate Students, Ernest studied for a BA degree in Classics. He successfully passed his first-year exams (or Schools as they were known) in 1913.

Here is a photograph of Ernest in the trenches. He was killed in action on 20 September 1917 near Langemarck in West Flanders, Belgium, whilst taking part in the first day of the Menin Road Battle. This was one of the actions making up the Third Battle of Ypres, popularly known as Passchendaele. As reported in the address later given at his memorial service, Ernest was leading his company to the attack when he was wounded in the shoulder. During a temporary lull he rallied his men, but was again wounded, this time fatally. He was 30.

A senior officer wrote that Ernest's men were devoted to him; another said that he had died a true soldier's death and that even though wounded he was “quite calm, cheerful and in no pain”. Six days later his family received this telegram informing them of his death. Two weeks later it was reported in the Oxford Journal Illustrated and in October 1917 in the magazine of Oxford University Non-Collegiate Students.

Fairly soon after the 1918 peace Dorothy (who had recently moved to teach in the Boys' Department of South Oxford School on Thames Street) travelled to the battlefields in Belgium where her brother had been in action and visited the approximate place where he fell. She annotated this map to show the spot where Ernest had died and took these photographs of his grave. He is believed to be buried at the Cement House Cemetery, West-Vlaanderen, Belgium. His headstone reads 'Believed to be buried in this cemetery' and at the request of his father is inscribed 'Requiescat in pace' ('Rest in peace'). Ernest is also commemorated on the Culham College Roll of Honour, on the St Catherine's Society First World War memorial which is in St Cross Church, Holywell, Oxford (now Balliol College's Historic Collections Centre), and on the First World War memorial of the Central Boys' School, which is now housed in the library of Oxford Spires Academy in East Oxford.

Dorothy transferred to the Girls' Department of South Oxford School in 1925; the Headmistress there later described her as “…exceptionally gifted…her devotion to her work in conjunction with high ideals and a wide outlook have produced results of the very best and lasting kind amongst the girls who have passed through her hands.” Dorothy continued as a much loved, respected and admired teacher until her retirement. She maintained a close and lifelong friendship with three other women whom she’d known since childhood and who also went into teaching: Elizabeth Lambourne, who became head at East Oxford Infants’ School; her sister Daisy Lambourne who became head at West Oxford Infants’ School; and Ethel Portbury who taught at St Thomas’s school. Between them these four women must have taught and cared for thousands of Oxford children.

Ernest and Dorothy's father died in June 1941 and their mother died six months later. Like so many women of her generation, Dorothy never married, and she stayed living in the family home at 7 Whitehouse Road until her death in March 1977, aged 87. 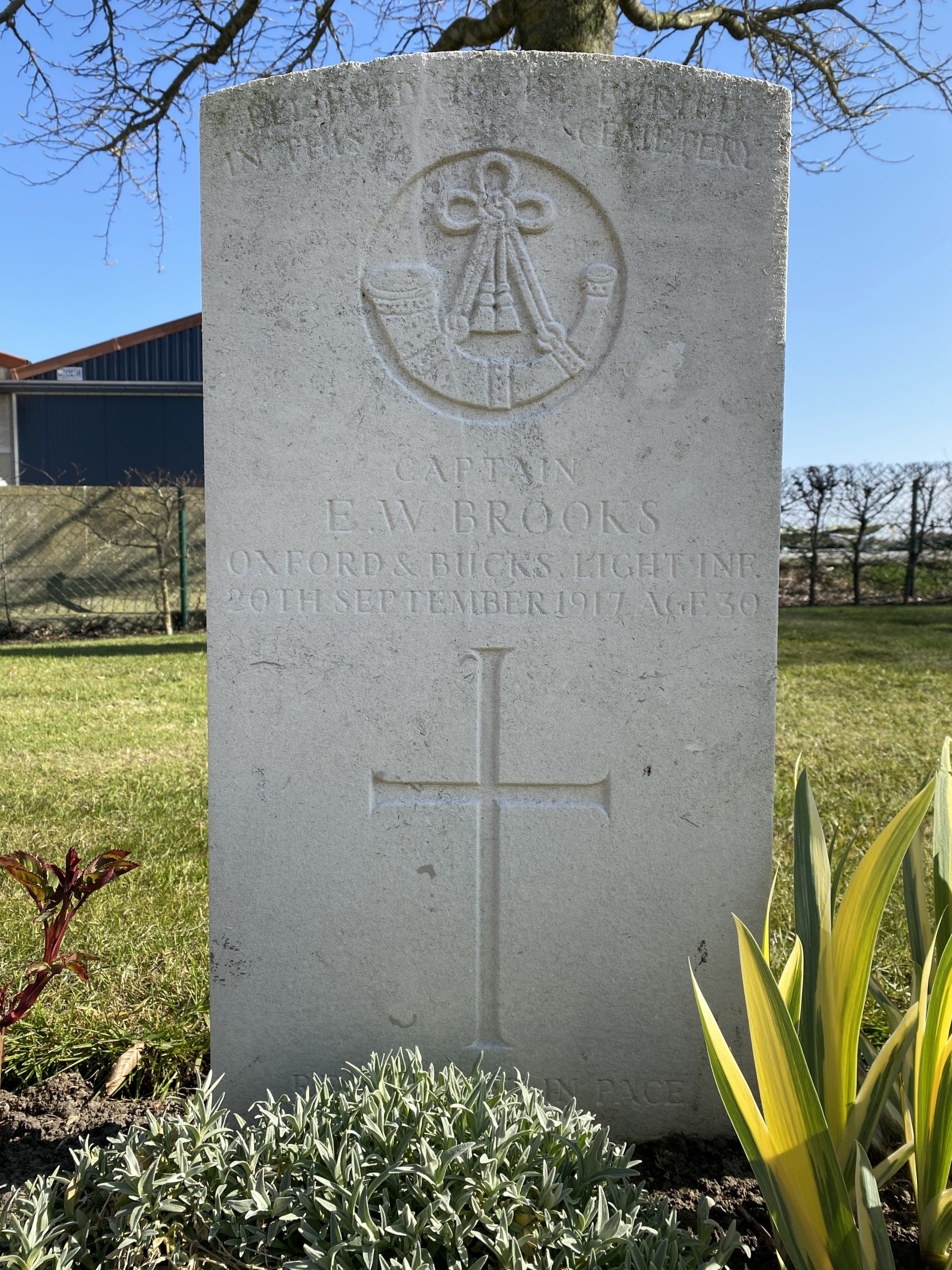 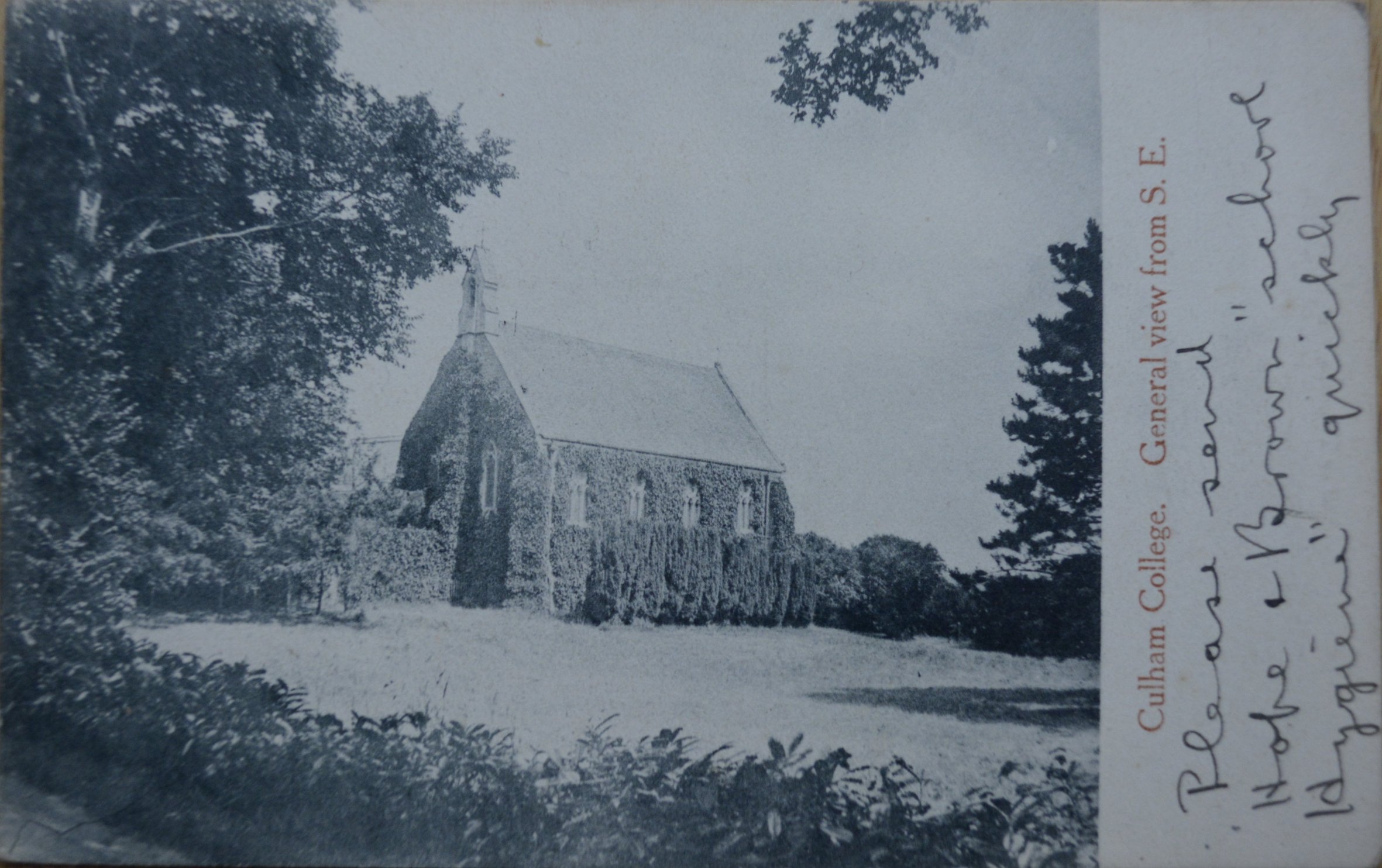 Dorothy Brooks (standing far left) with fellow teachers, and with her class of pupils, at the Oxford Girls Central School on New Inn Hall Street before the First World War. Reproduced by kind permission of Clive Organ. (Click on either image to close) 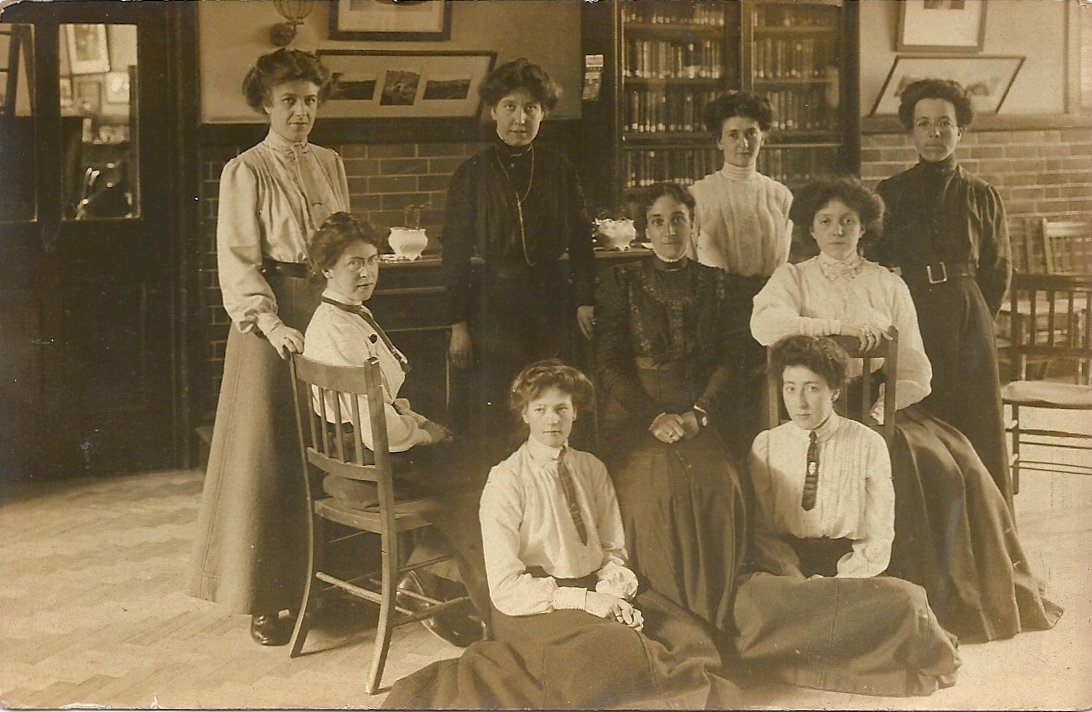 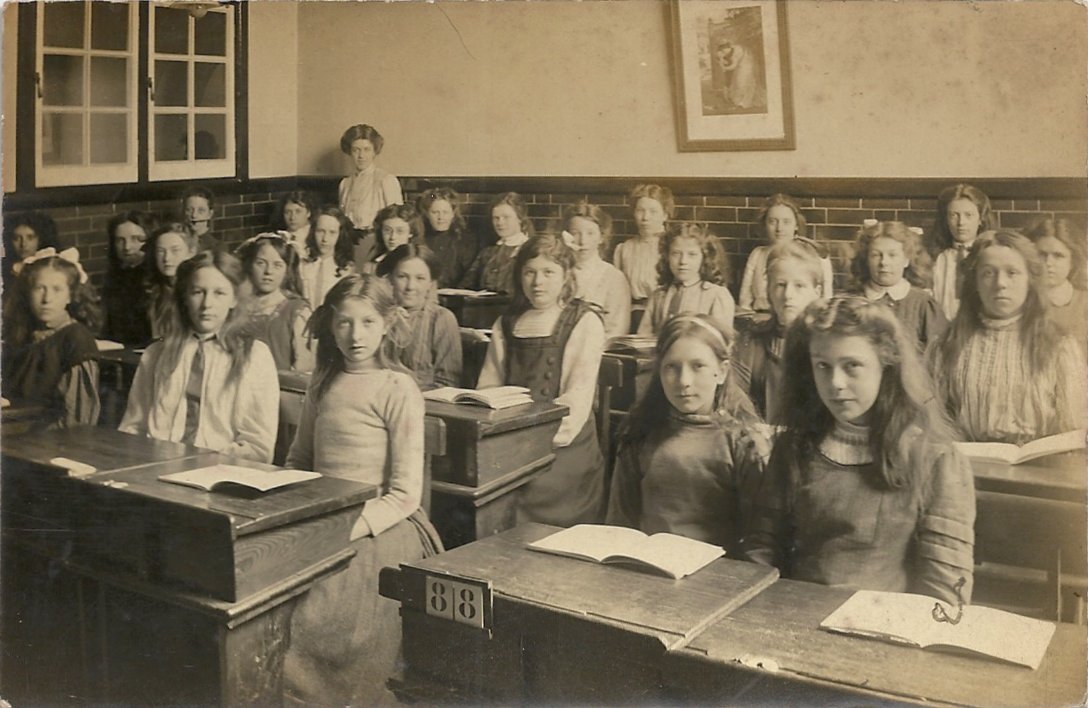 Ernest Brooks (standing right) as a teacher at the Oxford Boys Central School on Gloucester Green before the First World War. Reproduced by kind permission of Clive Organ. (Click on any image to close) 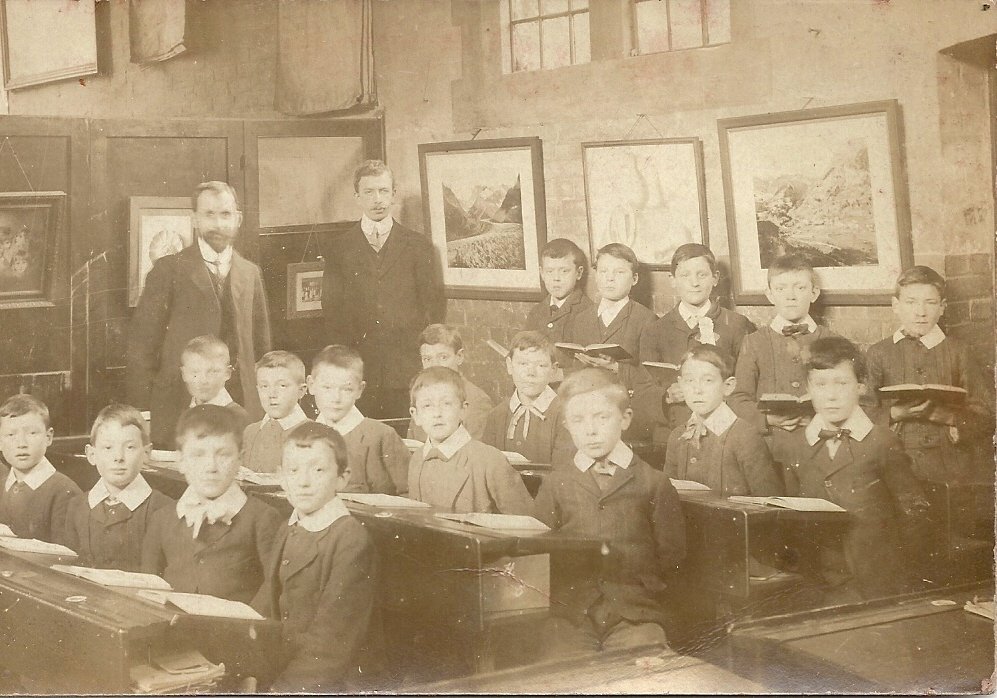 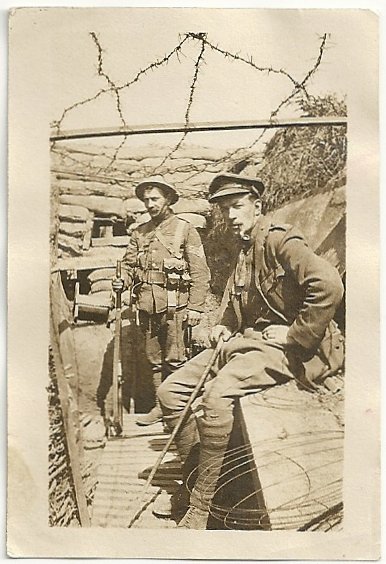 The telegram informing Ernest Brooks' family of his death. Reproduced by kind permission of Clive Organ. (Click image to close) 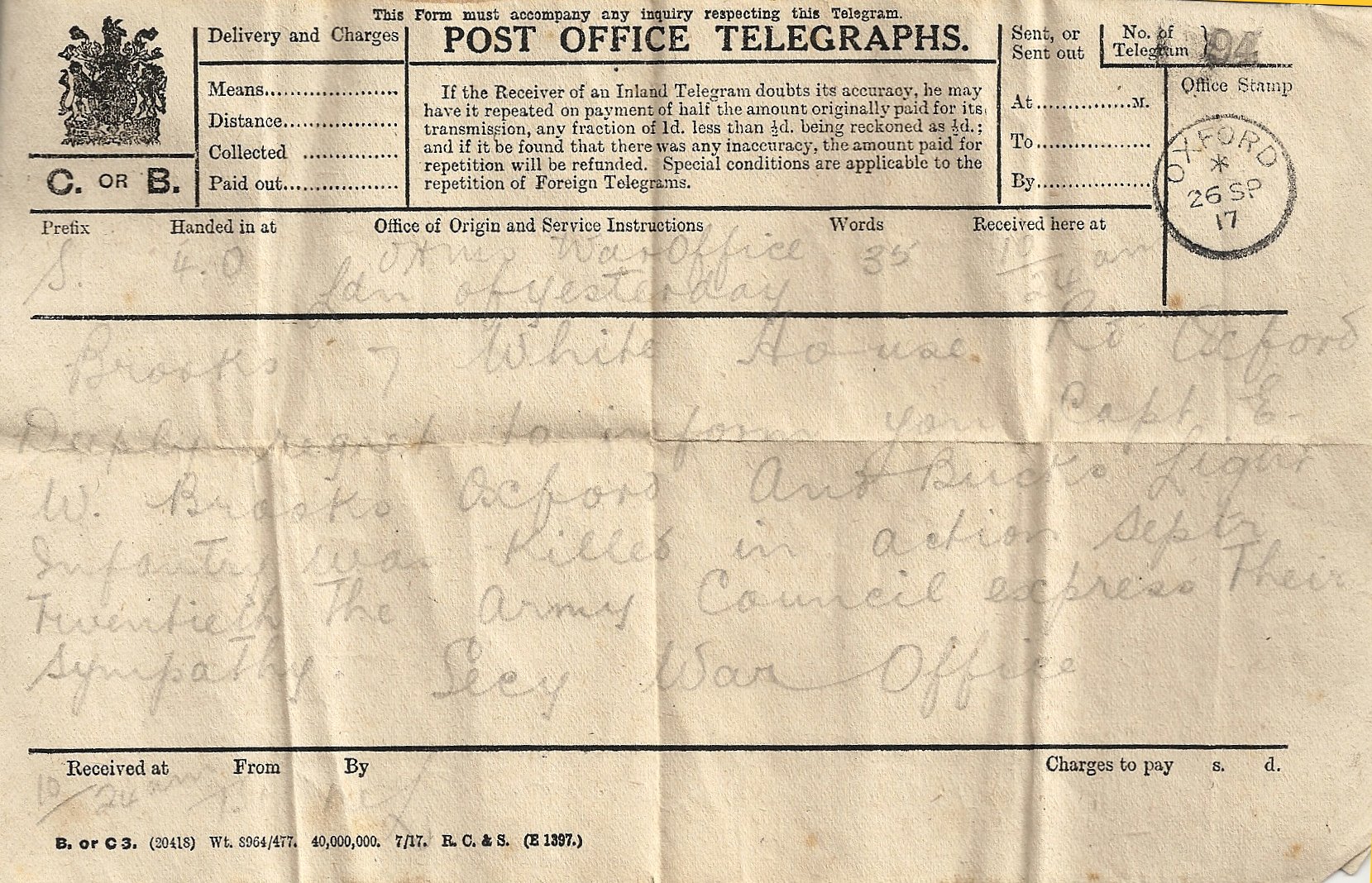 Photographs taken by Dorothy Brooks when she went to visit Ernest's grave at the Cement House battlefield, West-Vlaanderen, Belgium, shortly after the war ended. Reproduced by kind permission of Clive Organ. (Click on either image to close) 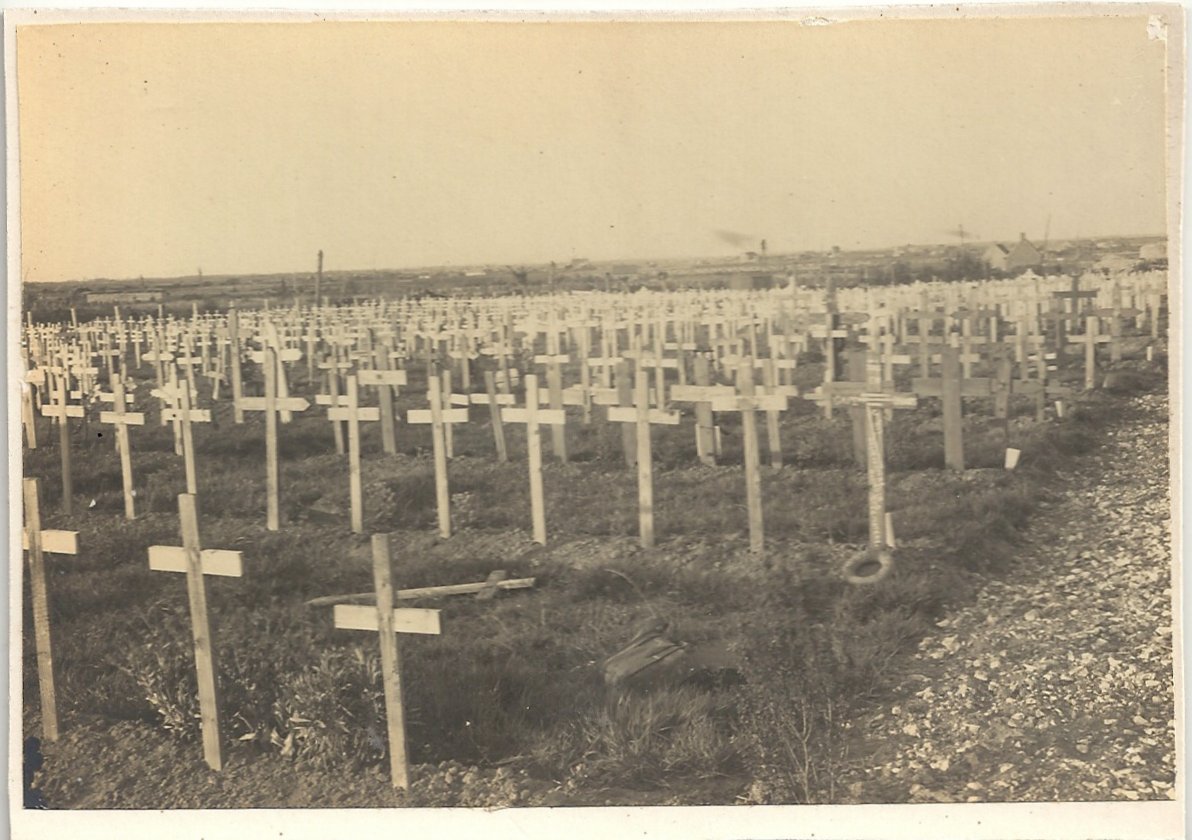 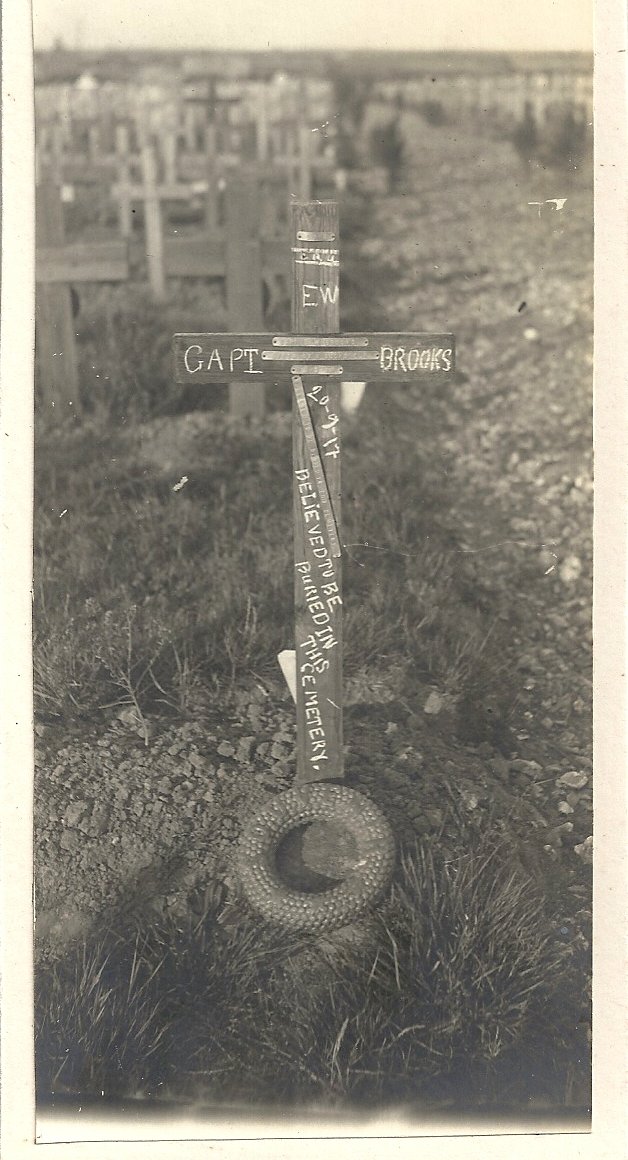 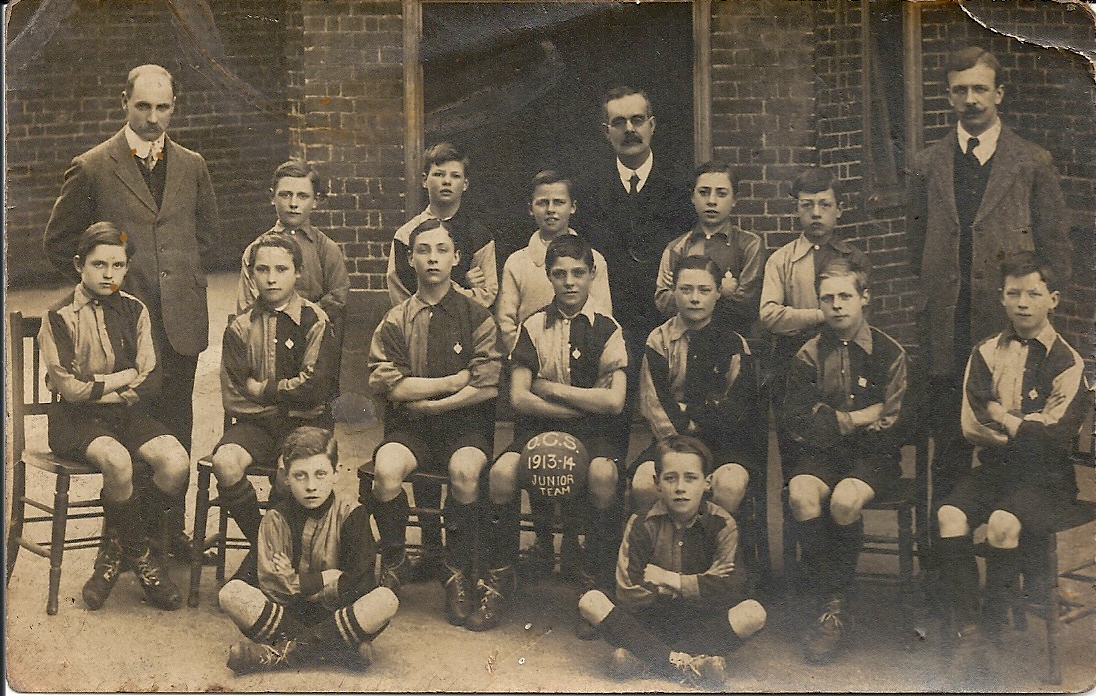 A military map dated 1917, giving the layout of the trenches near Langemarck in Flanders which Ernest Brooks and his regiment were working in at the time of his death. The place of his death has been marked by his sister Dorothy. Reproduced by kind permission of Clive Organ. (Click on image to close) 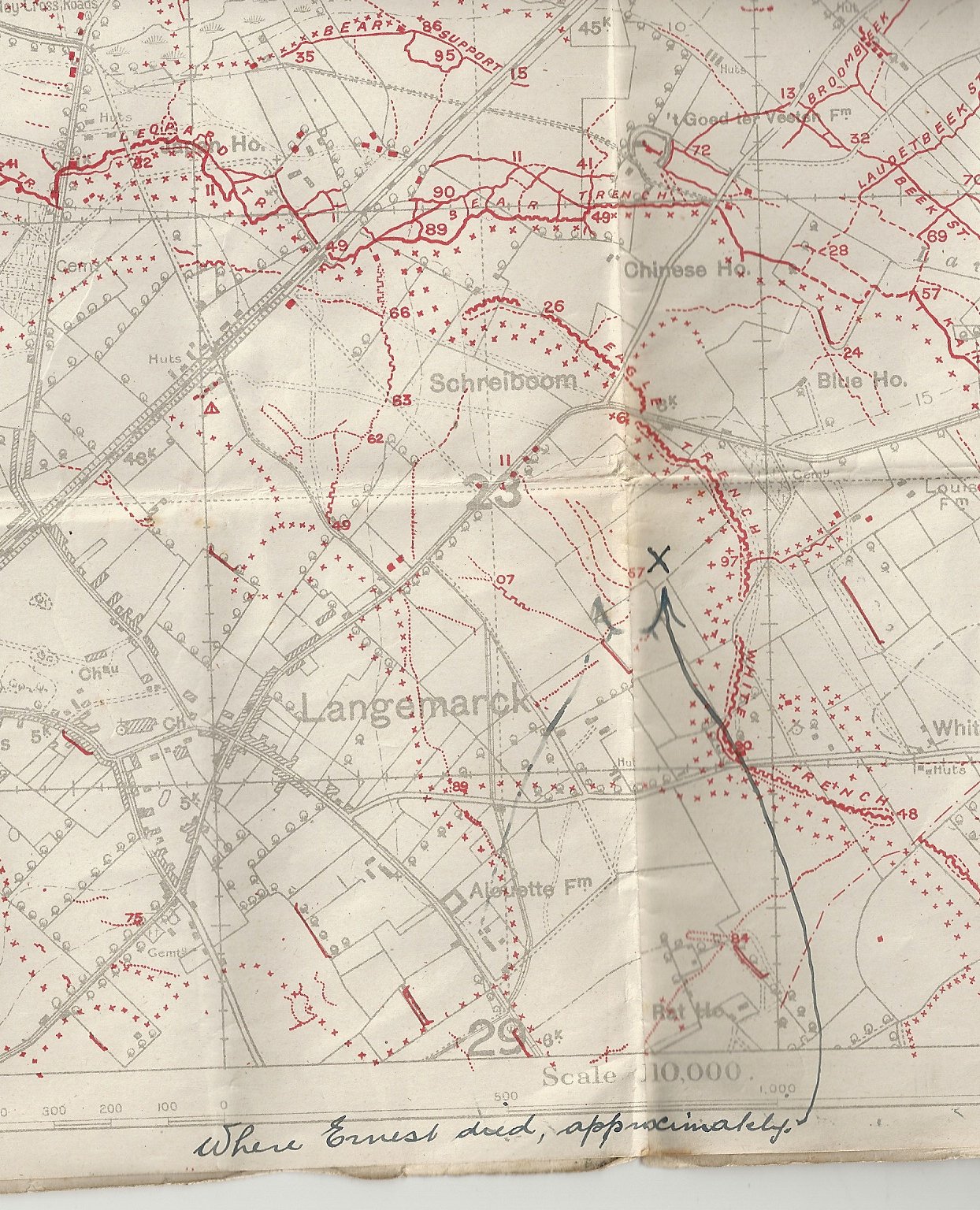 The obituary of Ernest Brooks which appeared in the October 1917 edition of the Non-Collegiate Students Magazine. Reproduced by kind permission of St Catherine's College. (Click on image to close) 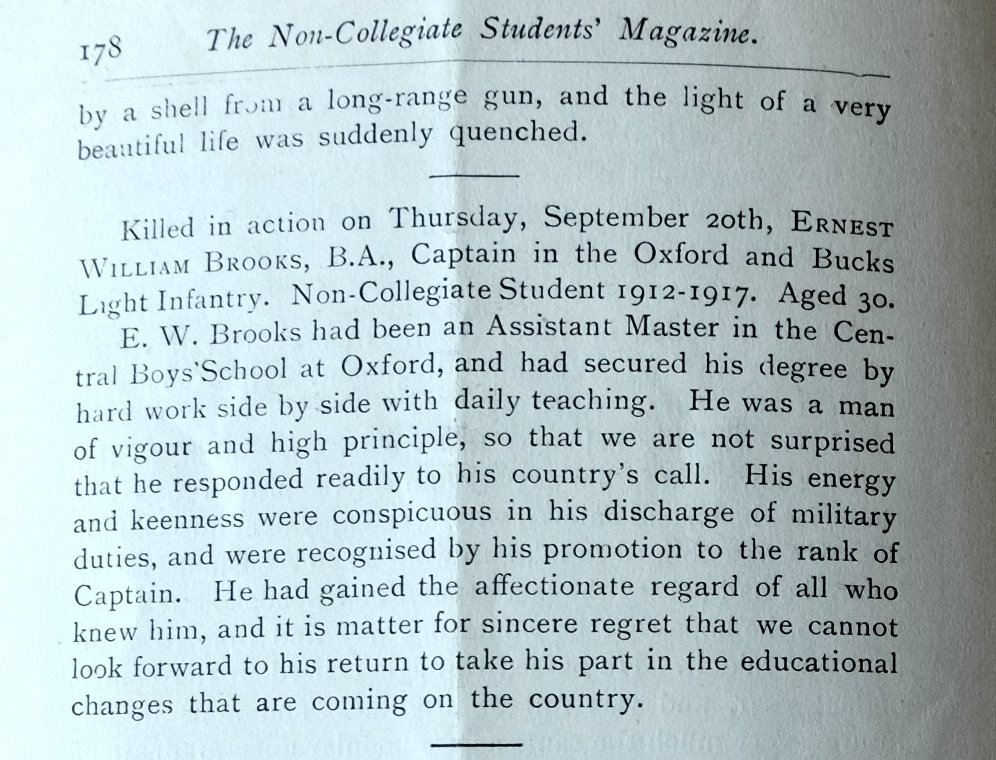