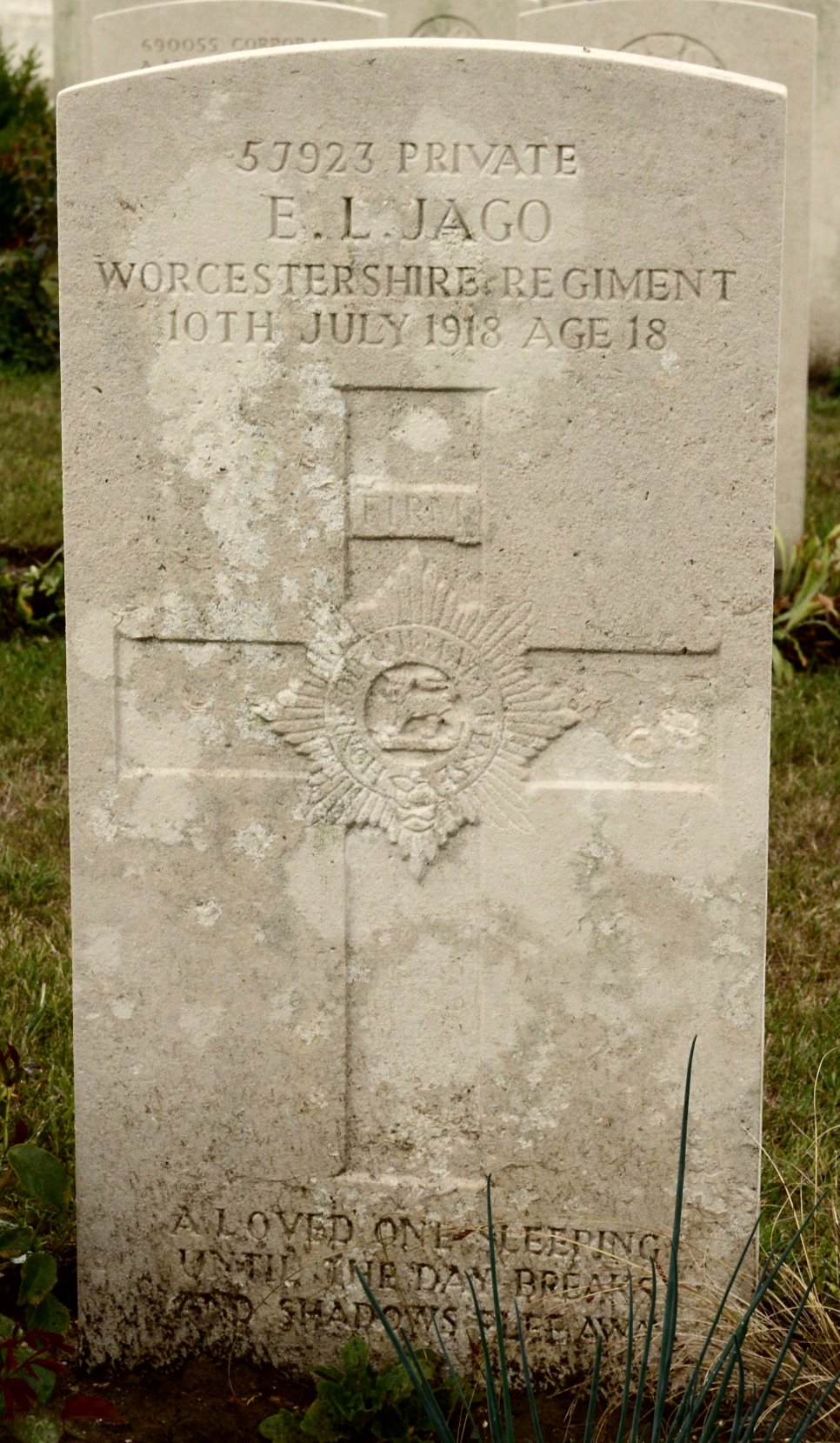 Ernest Jago was born in Ashford (now in Kent) on 21 September 1899, the only child of Ernest Alfred and Kate Elizabeth Jago. Ernest senior had been born in Petersfield in Hampshire in June 1873 and was a plumber. Kate (née Shawyer) was born in Donnington in Sussex in 1869/70. They were married in late 1898. In 1901 the family were living in Staines in Middlesex but by 1911 they had moved to Oxford to live at 4 Edith Road in Grandpont. Ernest senior was now working as an agent for an insurance company and on the night of the census Kate's two-year old nephew Leslie Horace Small was staying with them.

In the early part of the War Ernest junior worked in the Secretary's Office at the Oxford University Press (or the Clarendon Press as it was then called) in Jericho. He enlisted on 22 October 1917, a month after his 18th birthday, and became a Private with the 2nd/8th Battalion of the Worcestershire Regiment, service no. 57923. He was first posted to a Young Soldiers' Training Battalion, then sent to France on 3 May 1918. Bailleul, near Ypres, had been captured by the Germans during Operation Georgette in April. Ernest was part of 61 Division holding the front-line trenches in the Lys salient, west of Merville, which marked the furthest extent of the German advance. By July 1918 the allies were preparing to capture the lost ground once again. Ernest was wounded in the head on 10 July 1918; he died before reaching the dressing station, and only four months before the War ended, aged 18. He was buried at the St Venant-Robecq Road British Cemetery, Robecq, Pas de Calais, France. At the request of his father, Ernest's headstone bears the inscription 'A loved one sleeping / until the day breaks / and shadows flee away'.

Ernest is remembered on the Oxford University Press war memorial which was unveiled on 5 October 1920. 356 men from the Press served in the First World War and 45 of them died, including Albert Margetts. Ernest's and Albert's names are shown here. In this short video the OUP Archivist Dr Martin Maw talks about the Press during World War I.

Ernest's father Ernest died in July 1949 in Oxford, aged 76. His mother Kate died the following year in Portsmouth aged about 80.

With thanks to Stephanie Jenkins for additional information.