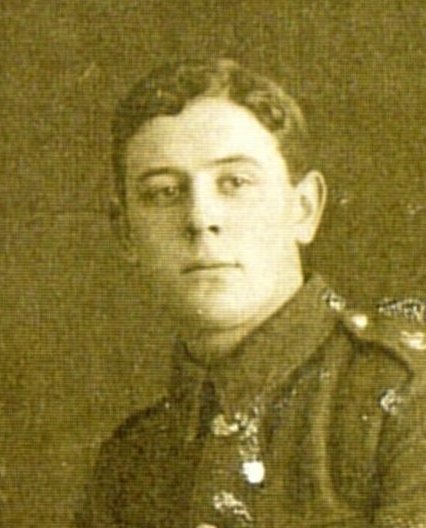 Frank (sometimes recorded as Frederick) Upfold was born in Tunbridge Wells in Kent in late 1897. He was the son of James William and Sarah Lilian Upfold. James had been born in 1857/58 in Chilworth in Surrey and as a young man he worked as a printing machine minder. In early 1888 he married Sarah Humphrey in Tonbridge in Kent; she had been born in Dorking in Surrey in early 1868. In 1891 the couple were living at 38 Camden Road in Tunbridge Wells, though they had moved around the country: they had two children, Sidney (aged 2, born in Sittingbourne in Kent) and Kathleen (aged 1, born in Oakengate in Shropshire). Sarah was a music teacher and both she and James were Captains in charge of the Salvation Army in Sittingbourne, with a note of 'Preach' (presumably short for 'Preacher') on James's entry on the 1891 census return.

The family moved to Cornwall but by the time of Frank's birth they had moved back to Tunbridge Wells and were living at 28 Garden Road. By 1901 there were six children: Sidney (aged 12); Kathleen (11); Lionel (7) and Eudora (5, known as Euie), both born in Penzance in Cornwall; and Frank (3) and Roy (8 months), both born in Tunbridge Wells. Sarah (aged 33), as well as looking after her six children, was still working as a music teacher, giving lessons at home. Her husband James (aged 43) was working as a builder's porter. Here is a photograph of the family taken in around 1906.

By 1911 Sarah and James appear to have parted and she had moved to 30 Cambridge Road in Eastbourne in Sussex with Frank, now 13, and his younger brother Roy, now 10, who were both at school. Sarah, now 43, was still working as a music teacher and the older four siblings appear to have left home. Their father James was working as a builder’s porter and living as a boarder at 23 Albert Street in Tunbridge Wells, in the household of Henry Taylor, a 54-year-old shopkeeper, and his wife Lucy, aged 60, and their 2-year-old adopted son Harry Taylor.

According to descendants of the Upfold family, Frank tried to enlist before he reached 18 by lying about his age, but his older brother Sid, who was fighting in France, found out and was enraged. He reported it to Frank's commanding officer and Frank was sent back home straight away, only to rejoin when he was old enough. From his service number (1973) it appears that Frank did originally enlist at some time between January 1913 and March 1914 with the 4th Battalion of the Oxf & Bucks Light Infantry, when he was still only sixteen or seventeen. Due to his young age he may have been placed in the 2/4 Battalion of the Oxf & Bucks Light Infantry after it was raised in Oxford in September 1914 in response to the outbreak of War. Hence he wasn’t sent to France with the 1/4 Battalion in March 1915. Alternatively Frank may have been serving with the 1/4 Battalion just prior to it being sent overseas, and this was when his brother Sid intervened, giving the army his true age, and as a result he was moved to the 2/4 Battalion. Here is a photograph of Frank (right) and Sid in uniform. Sidn considered Frank to be his favourite brother.

Frank was a Corporal and was sent to France with the 2/4 Battalion in May 1916. They landed on 24 May and moved to the Somme. Frank died of wounds near Laventie on 14 July 1916, less than two months later. He was 18. Laventie is in the Pas de Calais Department, west of Lille and north of Lens. The 2/4 Battalion had been holding the trenches and front line posts here prior to being called into action on 19 July – what became known as the disastrous Battle of Fromelles. This was an attempt to keep the Germans opposite away from the Somme front. Alexander Rennie had died in the same place two weeks earlier.

Frank was buried at Merville Communal Cemetery. This cemetery is behind the Laventie front and the area served as a hospital centre from 1915-18. He is also commemorated on the Tunbridge Wells First World War Memorial. He was awarded the British War and Victory Medals, as well as the Territorial Force War Medal, the rarest of the five Great War campaign medals. This further suggests that Frank had spent a fair amount of time serving with the territorial army before he was sent to France.

According to the Tunbridge Wells Roll of Honour Frank enlisted in Oxford; however, according to the Oxf & Bucks Light Infantry records he enlisted in Tunbridge Wells, but gave his place of residence as Oxford. In any case it's not entirely clear why he is named on the St Matthew's memorial: perhaps he was lodging with a local family. The connection may have been via his brother Sidney James Upfold, who was lodging in Wallingford in 1911-13 and working as a law clerk. He was a champion swimmer. On the outbreak of War he was working as a teacher at the Institute for Research in Agricultural Economics in Oxford. He applied to join the Oxf & Bucks Light Infantry in August 1914 but was rejected because he had curvature of the spine. He joined instead the Royal West Kent Regiment (service no. 240319) and was injured at the Somme in 1916. He was granted a commission and became a Second Lieutenant. He was sent to France and in 1918 was awarded the Military Cross for conspicuous gallantry during an attack. He was wounded and was sent back to Britain to be treated in hospital in Birkenhead. He survived, and in July 1922 he married Jean McGregor, who was originally from Liverpool, but whose family were living in Grandpont during the War (first at 22 Buckingham Street and then at 24 Marlborough Road). The wedding was in Oxford. It's possible that Sid and Frank had known Jean and her family before the War, and that one or both of them were lodging in Grandpont with the McGregors. Sid and Jean had two sons, Sidney (born in 1923), and Frank (born in 1927, and named after his uncle). They were living at 20 Leckford Road in North Oxford at this time. When Sid snr died in March 1947 he was living in Cumnor Road in Wootton (then in Berkshire).

Frank's other older brother Lionel also fought in the War, but survived. Their younger brother Roy Vernon Wycliffe Upfold joined up in 1915, when he was only 15, as mentioned in Richard van Emden's book Boy Soldiers of the Great War. When the recruiting Sergeant asked his name, he replied "Upfold R, Sir" as he was meant to, but he had a lisp and the Sergeant thought he said 'Arthur', a name which Roy preferred and which he kept for the rest of his life. He fought at the Battle of the Somme at the age of 16, but survived. He moved to Liverpool after the War to work on the construction of the Mersey tunnel, and lived to the age of 95.

At the time of Frank's death in 1916, his father James was living at 20 Grove Hill in Tunbridge Wells in Kent. His mother Sarah died in Croydon in 1961, aged 93. His older sister Euie lived to be 102; here is a photograph of her on her 100th birthday in 1995, holding her seventh great grandson, Ben.

The Upfold family in around 1906: back row, l-r: Lionel, Kathleen and Sid; front row, l-r: James, Eudora, Frank, Roy and Sarah. Reproduced by kind permission of Michael Jones. (Click on image to close) 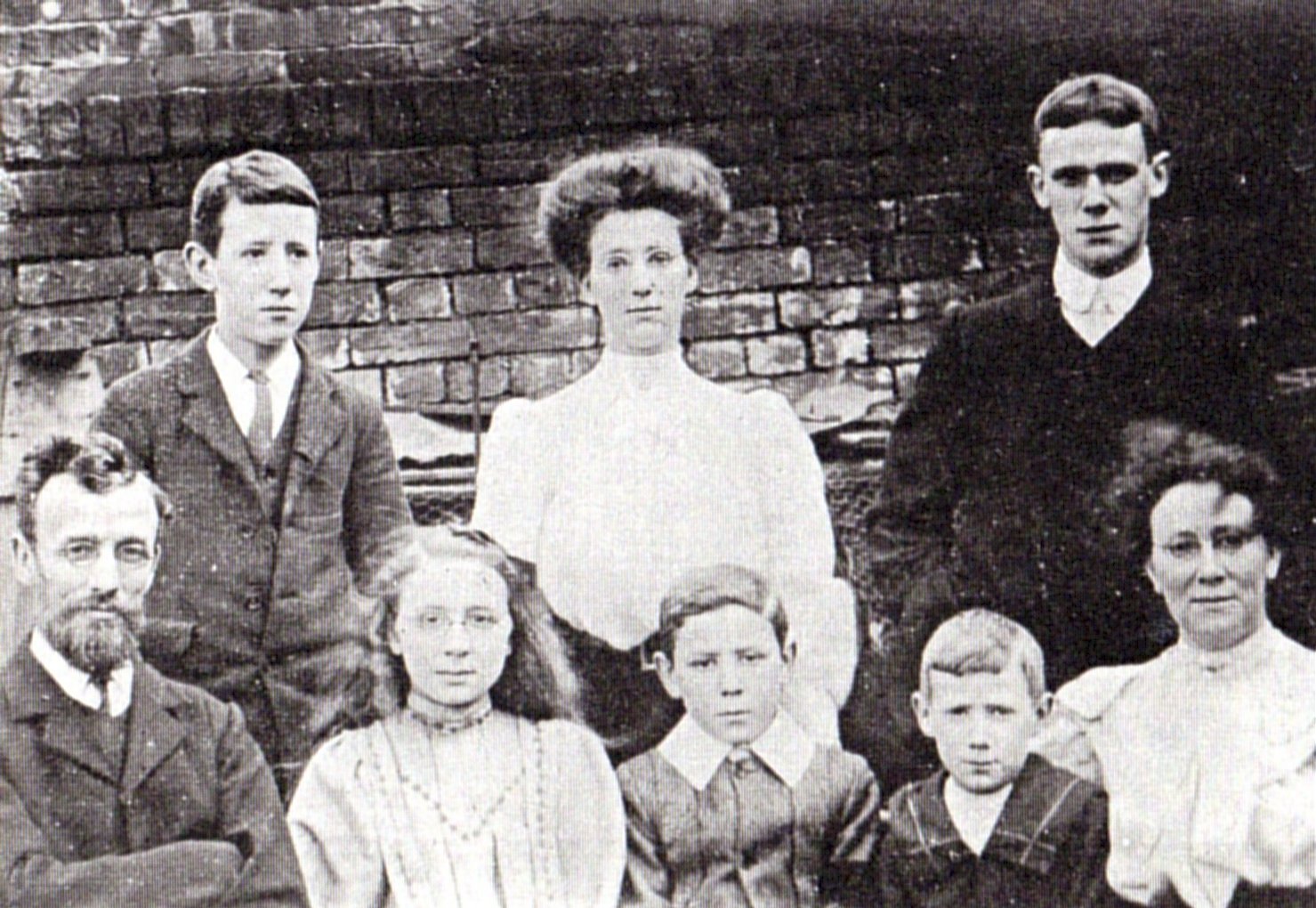