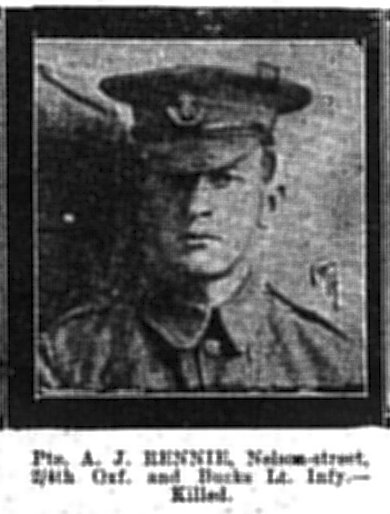 Alexander John Rennie (also known as Jack) was born on 24 April 1890 in Grandpont, the son of William John and Louisa Rennie and the ninth of ten siblings. William had been born in May 1852 in Peshawar in India to British parents (his father was in the army). As an adult William worked as a printer and compositor, perhaps at the University Press. On Christmas Day 1874, at St Aldates Church, he married Louisa Graham, who had been born in 1849 in St Aldates and grew up in New Hinksey (then in Berkshire). The couple had four children in the next five years: Amy (born 1875/76); Olive (born 1876/77); Willie (1878/79); and Bertie (1880/81). They then moved to Bournemouth and in 1881 were living at 66 East Cliff Terrace there.

Alexander worked as a waterman for Abel Beesley, the University Waterman. His older sister Olive was a dressmaker; in July 1901, when she was 24, she married Thomas Bayliss, a machinist of 26 Chilswell Road, at St Matthew's church. Alexander's brother Willie worked as a printer's compositor. In November 1907, when he was 30, he married Florence Holmes at St Matthew's church. She was of 60 St Aldates, and her father was an engineer. The couple moved to 53 Western Road and they had at least two children: Harold (born February 1909); and Walter (born March 1913). Both boys were baptised at St Matthew's church and later worked as compositors, like their father and grandfather. They both married young women from Jericho, at St Matthew's: Harold in October 1936 and Walter in January 1937.

Alexander's brother Bertie was employed as a tailor. In April 1906 his sister Lilian married Abel Kilbee, a waiter at the Randolph Hotel, and the couple went to live there. Later they moved to 138 Marlborough Road and Abel went to fight in the War, but survived (though his two younger brothers Henry and Charles were killed in action). Abel was a 2nd Private with the Kite Balloon Section of the Royal Air Force, service no. 123665.

Alexander's sister Bessie was a domestic servant. In January 1909, when she was 24, she married John Green, a house fitter (and later an upholsterer), at St Matthew's church. By April 1911 they had two children, one aged one year and the other six weeks, and were living with Mr and Mrs Rennie senior at 172 Marlborough Road. John Green went to fight in the War, as a Company Sergeant Major in the 610th Employment Company (service no. 200767), but seems to have survived.

Alexander's other brother William (or Wallace) was employed by a bicycle maker. Their parents died not long before the outbreak of War: William senior in 1913 and Louisa in March 1914.

In the summer of 1914 Alexander married Lizzie Annie May Poulter and they went to live at 6 Nelson Street in Jericho; he enlisted in October. Their son Jack was born in January 1915 and his St Matthew's baptism record gives his parents' address as 22 Buckingham Street, and his father's occupation as 'soldier', so perhaps Lizzie was living with relatives in Grandpont whilst Alexander was with the army.

Alexander was a Private in the 2/4 Battalion of the Oxf & Bucks Light Infantry (service no. 3537) which had formed at Oxford in September 1914 as a second line unit of territorials (volunteers). Its members had not signed up to serve overseas and this remained their status until after conscription was introduced in 1916, when all single men of fighting age could be sent overseas whether they had agreed or not. Having been based in Northamptonshire, Essex and later Wiltshire, the battalion landed in France on 24 May 1916 and moved to the Somme. Alexander was killed near Laventie on the first day of the Battle of the Somme, on 1 July 1916, aged 26. Laventie is in the Pas de Calais Department, west of Lille and north of Lens. On 1 July the 2/4 Battalion was holding the trenches and front line posts here prior to being called into action on 19 July – what became known as the disastrous Battle of Fromelles. This was an attempt to keep the Germans opposite away from the Somme front. Alexander volunteered to go out and bring in a wounded comrade and in doing so was shot by machine-gun fire. One of his officers wrote to Alexander's widow Lizzie: “Your husband was killed last night. He volunteered to go out to bring in a wounded comrade and in doing so he was shot by machine-gun fire. Death must have been instantaneous. He was a brave man and an excellent soldier, and he died in the performance of a brave action. He will be missed in the company, in which he had served some 21 months.” The Chaplain who buried Alexander and a comrade also wrote to express their sympathy. His comrade said “It was instant death, and he did not suffer the slightest bit. We buried him this afternoon. Bill and myself got permission to attend the service, and we helped carry him down. You have the heartfelt sympathy of all the company, as he was well liked by us all." Frank Upfold died in the same place two weeks later.

Alexander was buried in Laventie Military Cemetery, La Gorgue. ‘He gave his life for a comrade’ was inscribed on his gravestone at the request of his widow. He is incorrectly recorded on the St Matthew's memorial as 'WJ Rennie', i.e. using his father's initials instead of his own, perhaps because his father died not that long before him, in 1913. Because Alexander and Lizzie had moved to Jericho after their marriage he is also commemorated on the St Barnabas war memorial (correctly, as A Rennie).

Alexander and Lizzie's 18-month old son Jack died less than two weeks after his father, when the tin bath he was in tipped over onto the fire and he was badly scalded. On 7 July 1917 Lizzie placed the following In memoriam notice on the front page of The Oxford Times: 'Rennie – In loving memory of my dear husband, Alexander John Rennie, killed whilst recovering a comrade at Laventie, France, on July 1, 1916, aged 26 years: also our dearly-loved and only child, Jack, died July 13, 1916, aged 18 months. “Fondly I loved them, they are dear to me still, but in grief I must bend to God’s holy will. My sorrow was great, my loss hard to bear, but angels are tending my loved ones with care”.'

Several of Alexander's siblings stayed in Oxford and died in the city within a short time of each other: Bertie died in April 1949, Wallace in June 1950, Amy in February 1951, and Olive in July 1958.

The name of AJ Rennie was read out on the Roll of Honour at the Tower of London on 11 November 2014 by General Lord Dannatt, Constable of HM Tower of London. It was put forward by Alexander's great great niece, Jayne Bayliss, who is the great granddaughter of Alexander's sister Olive. Jayne and her son were present when the name was read out, having helped with the planting of the 888,246 ceramic poppies at the Tower. In 2017 the family was reunited with Alexander's medals and memorial plaque.

With thanks to Barry Burnham and to Jayne Bayliss for additional information.

Alexander Rennie's memorial plaque (or 'Dead Man's Penny', sent to the next-of-kin of those who died in the War) and his medals. Image courtesy of Jayne Bayliss. (Click on image to close) 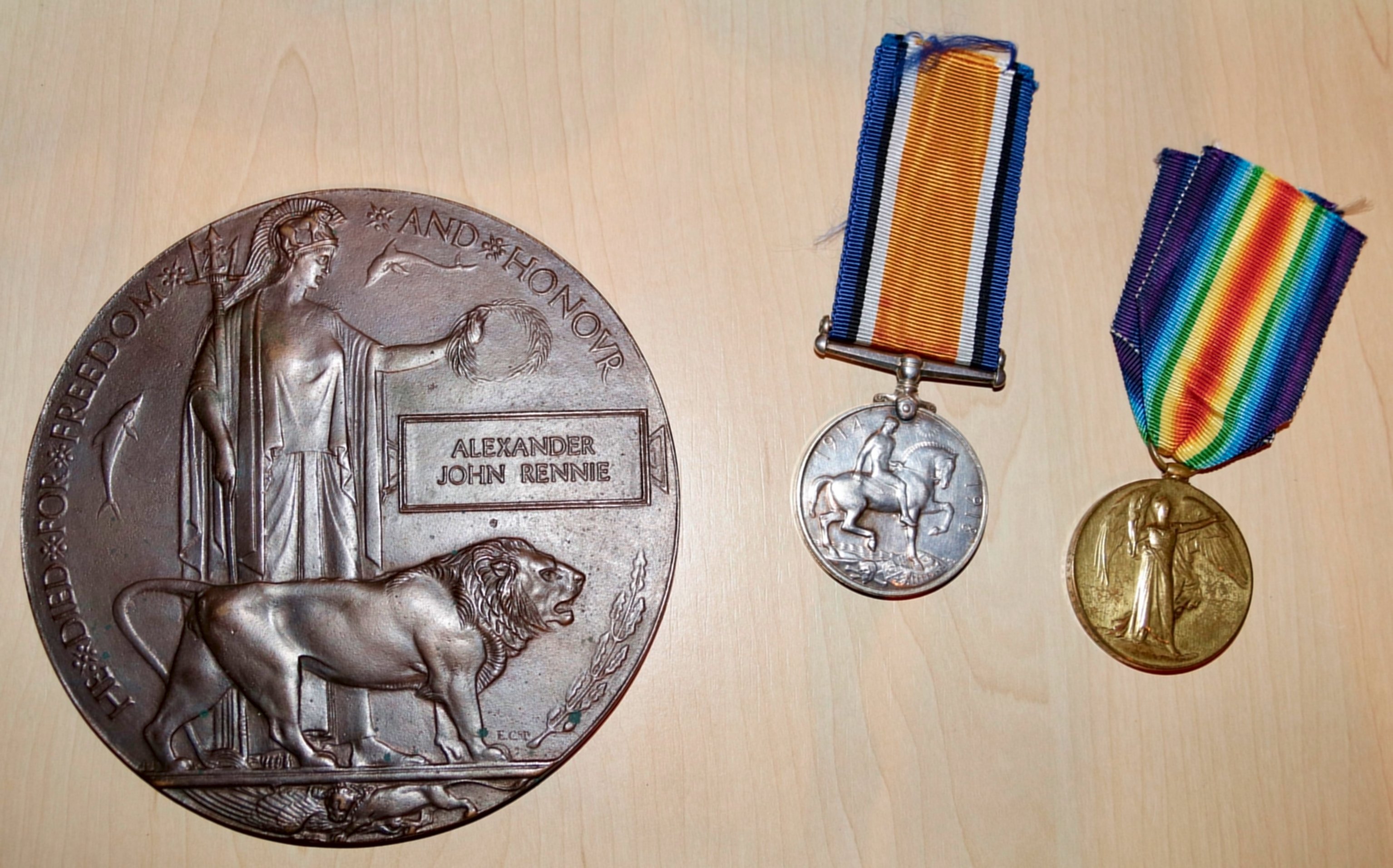