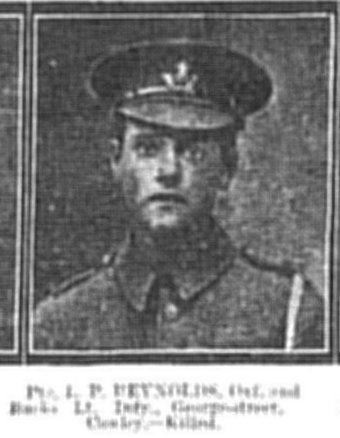 Leonard Reynolds was born in early 1897 in York, the son of George and Emily Reynolds. He was the cousin of Albert Reynolds: Leonard's father George was the brother of Albert's father Ernest.

In 1901 the family was living in Fulford Road in York and Edith, the oldest child (aged 17), was working as a pupil teacher [an apprentice teacher]. When the last child Ronald was born in 1906/07 they were in Dover but by 1911 they had moved to Oxford, living briefly at 6 Cobden Crescent in Grandpont before moving to 64 Sunningwell Road in New Hinksey. George had retired from the army and was working as a house painter and boot repairer and Leonard, now 14 and the oldest child still at home, was a bookbinder’s errand boy. His younger siblings were all still at school.

Leonard enlisted and became a Private with the 1/4 Battalion of the Oxf & Bucks Light Infantry, service no. 201605. He was killed in action on 7 August 1917, aged 20, whilst the battalion was holding the trenches at Kitchener’s Wood, to the west of St Julien during the Third Battle of Ypres in Belgium. The 1/4 was heavily bombarded by artillery at various points during the day.

Leonard is buried near to where he fell, in Artillery Wood Cemetery. At the request of his mother 'Though gone from sight / To memory ever dear' is carved on his headstone.

Leonard's death was reported in the Oxford Journal Illustrated on 5 December 1917, describing him as of 'George Street, Cowley' (now Hendred Street, East Oxford). However, there is no mention of him living at that address in the electoral register nor in contemporary street directories, so this may have been an error.

In 1922 Leonard's parents George and Emily moved to 8 Western Road, two doors away from George's brother Edward Reynolds (1866-1925) and his wife Amelia. Edward had a house-decorating and plumbing business with his son, Leonard, at 12 Western Road. This Leonard (the cousin of the Leonard discussed on this page) also fought in the War, but survived. He was a Private in the 5th Battalion of the Royal Sussex Regiment, service no. 231444, and was deployed in Italy. He died in 1975.

Leonard's youngest brother Ronald was too young to fight in the War but he later followed his brother and father into the army. He married a woman called Florence Gwendolen and when their daughter Patricia Margaret was born in 1929 they were living at 8 Western Road. Patricia was baptised in St Matthew's church.