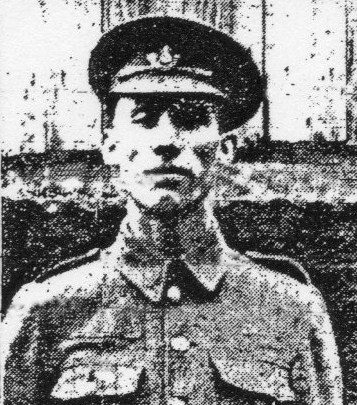 Most of the information below is kindly supplied by Barry Burnham, whose full biography of Percival Edens appears here.

In 1891 the Edens family was living at 37 Sunnymeade in Summertown. Percy was educated at St Barnabas School in Great Clarendon Street in Jericho. He then followed his father in becoming a plasterer, employed by William Griffin of Hayfield Road, for whom he worked for 15 years. By 1901 the family had moved to 47 Bridge Street on Osney Island. Percy's two oldest sisters Annie and Edith were working as tailoresses (though by 1911 they had both become laundrymaids).

In October 1906, when he was 22, Percy married Edith Harriet Cheer (aged 21) at St Peter le Bailey church [now the chapel of St Peter's College]. She was from the parish of St Mary Magdalen, and the daughter of a labourer and porter. The couple moved to 32 Henley Street off the Iffley Road, and there the first of their six children, William Percival (Bill), was born in May 1907. The family had moved to the southern end of the Abingdon Road, to the area known as Cold Harbour, by the time of the birth of their second child, Albert (Bert), in August 1908. Four further children were born: Gertrude Daisy (in summer 1910, known as Daisy), John (late 1911), Stanley (summer 1913) and Gwendoline (summer 1915, known as Gwen). John and Stanley both died in infancy, aged only a few months.

In 1911 Percy, Edith and their children were living at 218 Abingdon Road but by the outbreak of the War they had moved to 21 Church Street in St Ebbe's, near to Percy's mother Annie. She was living with her four youngest daughters in Wood Street, whilst Percy's father was lodging at the Peacock Inn on Oxford's High Street.

Percy enlisted in February 1915, several months before the birth of his last child Gwendoline. He was a Private, initially with the 1/4 Battalion of the Oxf & Bucks Light Infantry, service no. 4341, and later with the 5th Battalion of the Oxf & Bucks Light Infantry, service no. 201496. This battalion had been formed at Oxford in August 1914 in response to Lord Kitchener's call for 100,000 volunteers to join the army soon after War broke out. It moved to the Somme on 7 August 1916. Percy was killed on 3 May 1917 in a failed attack on German lines, during the Third Battle of the Scarpe phase of the Battles of Arras. Eight British officers and 291 British men were killed or wounded, including Albert Oliver and Albert Smith. The British were supporting a larger French offensive further south - the battles of the Chemin des Dames and the Champagne Hills. Percy was 32 when he died.

Initially Percy was recorded as missing but eventually his death was confirmed, though his body was never recovered. He is named (together with Albert Oliver and Albert Smith) on the Arras Memorial at Pas de Calais, which commemorates almost 35,000 servicemen from the United Kingdom, South Africa and New Zealand who died in the Arras sector between the spring of 1916 and 7 August 1918 (the eve of the Advance to Victory) and who have no known grave. On 4 May 1918, a year after his death, this In Memorium notice was published in The Oxford Times.

Percy's brother Thomas served in the War with the Oxf & Bucks Light Infantry and the Army Ordnance Corps, but survived. Percy's widow Edith remarried two years after his death, to Harold Slatter (a printer) at St Ebbe's church in June 1919. Harold had been a friend of Percy's from before the War, and the two men had made a pact that if Percy did not survive, Harold would look after Edith and the children. This he did, and he and Edith had three more children: Ronald, who died as an infant, Winifred Iris (known as Iris) and Harold junior.

Of Percy and Edith's surviving children, Bill married and spent a lot of his life living and working in the local area. He was an ambulance driver during the Second World War. He and his wife lived in Fox Crescent in Cold Harbour and had two daughters, Valerie and Rosemary. Bill died in Oxford in 1980. Bert married and had four children: Joan, Vivian (known as Judy), Antony and James. Daisy married an American GI in Germany in 1946, and later moved to America and had two sons there. Gwen never married but looked after her stepfather Harold Slatter at their home at 212 Abingdon Road until his death. She continued living in the house until she moved to a care home in Cumnor in around 2006; she died in 2008.