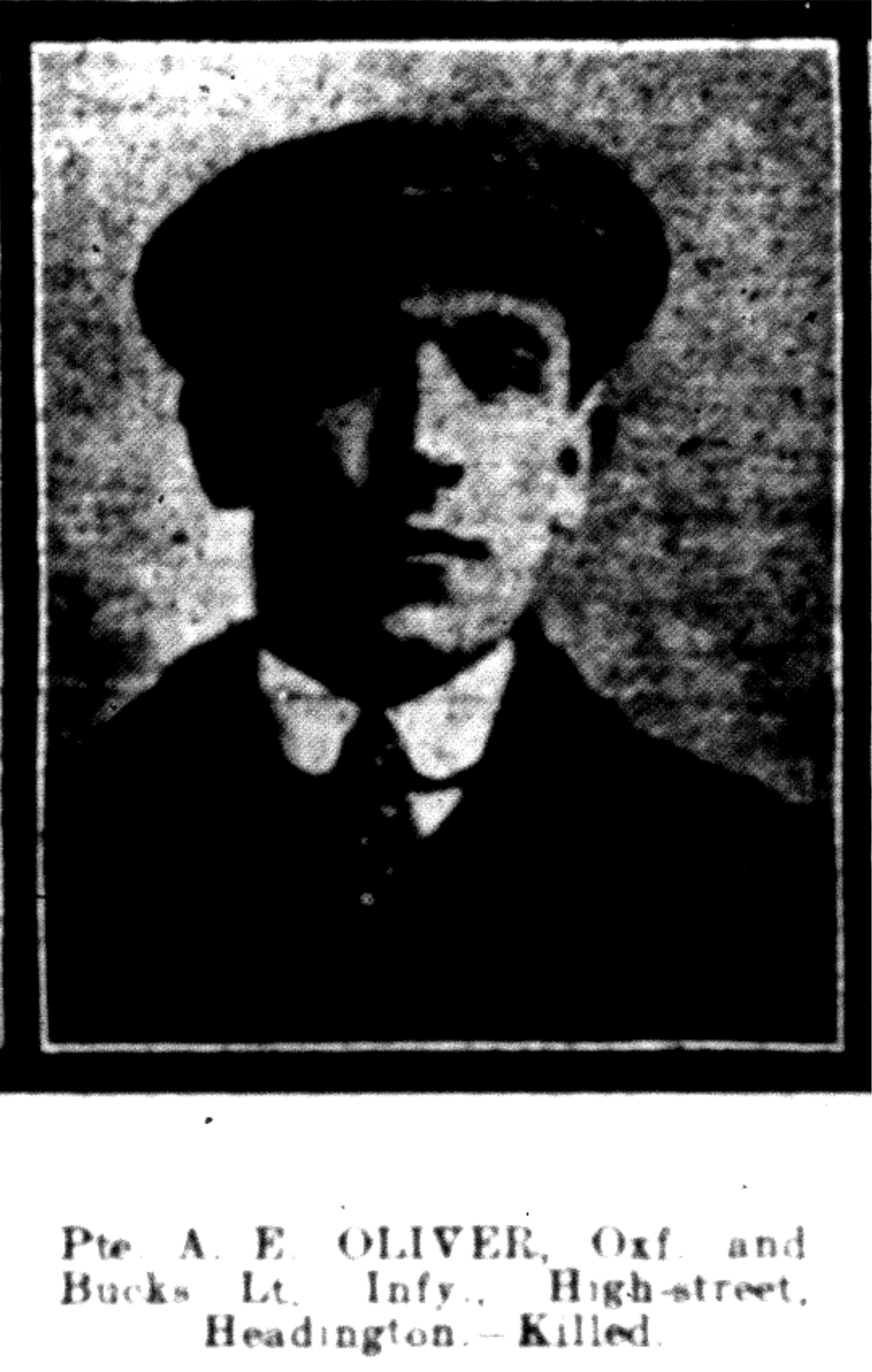 Albert Oliver's wife lived in Headington and so he also appears on the war memorial of All Saints church, Highfield and some of the information below comes from their website.

Albert Oliver was born in Oxford on 19 June of 1887, the only child of Edward Oliver (born in Newcastle upon Tyne in 1864) and Mary Ann (née Day, born in Childrey, then in Berkshire, in 1864/5). He was baptised at St Aldates church on 7 August. His parents had been married in the spring of 1886; Albert’s father was a boatman or boatbuilder. At the time of the 1891 census the family were living at 31 Thames Street (off St Aldates) and Albert was aged three. By 1901, when Albert was 13, his father was a boatman on a barge, and the family spent census night at Bourne End, Buckinghamshire. By 1911 the family was living at 2 Jubilee Terrace, Grandpont, and Albert (now 23) was also working as a boatbuilder, possibly at the oar and scull works of Harris & Son, which was next door to the house. The proprietor, George Harris, was himself living at 2 Jubilee Terrace by 1915.

On 5 June 1915 Albert married Martha Lammas (born in St Ebbe’s in 1887) in All Saints’ Church, Headington. By this time he had already volunteered to serve as a Private with the 5th Battalion of the Oxf & Bucks Light Infantry (service no. 32709) and his address at the time of his marriage was given as Great Waltham, near Chelmsford in Essex, where the Oxf & Bucks were then stationed (see Arthur Belcher). The 5th Battalion had formed at Oxford in August 1914 in response to Lord Kitchener's call for 100,000 volunteers to join the army soon after War broke out. The battalion landed at Boulogne in May 1915 and moved to the Somme on 7 August 1916.

It's likely that following her marriage to Albert in 1915, Martha remained in her parents’ house at 17 New High Street in Headington while Albert was away. She had a son, Stanley Albert, born in New High Street, Headington, and baptised at All Saints’ Church on 21 September 1916. Albert is described as a boatbuilder at the time of the baptism, so it is possible that he left the army after his marriage; but he would have been conscripted back in the following year.

Albert was killed on 3 May 1917, aged 29, during the Third Scarpe phase of the Battles of Arras. The British were supporting a larger French offensive further south - the battles of the Chemin des Dames and the Champagne Hills. Percival Edens and Albert Smith were killed in the same battle on the same day. Their bodies were never recovered but all three are named on the Arras Memorial at Pas de Calais, which commemorates almost 35,000 servicemen from the United Kingdom, South Africa and New Zealand who died in the Arras sector between the spring of 1916 and 7 August 1918 (the eve of the Advance to Victory) and who have no known grave.

Albert's son Stanley was eight months old when his father died. He and his mother Martha continued to live with his grandparents at 17 New High Street, Headington, and Albert is therefore also remembered on the Roll of Honour of All Saints’ Church, Lime Walk. Martha remained at 17 New High Street after her parents' deaths and until at least 1976. Her and Albert's son Stanley married Doris Webster in the Ploughley Registration District in early 1944.

With thanks to Stephanie Jenkins for additional information.