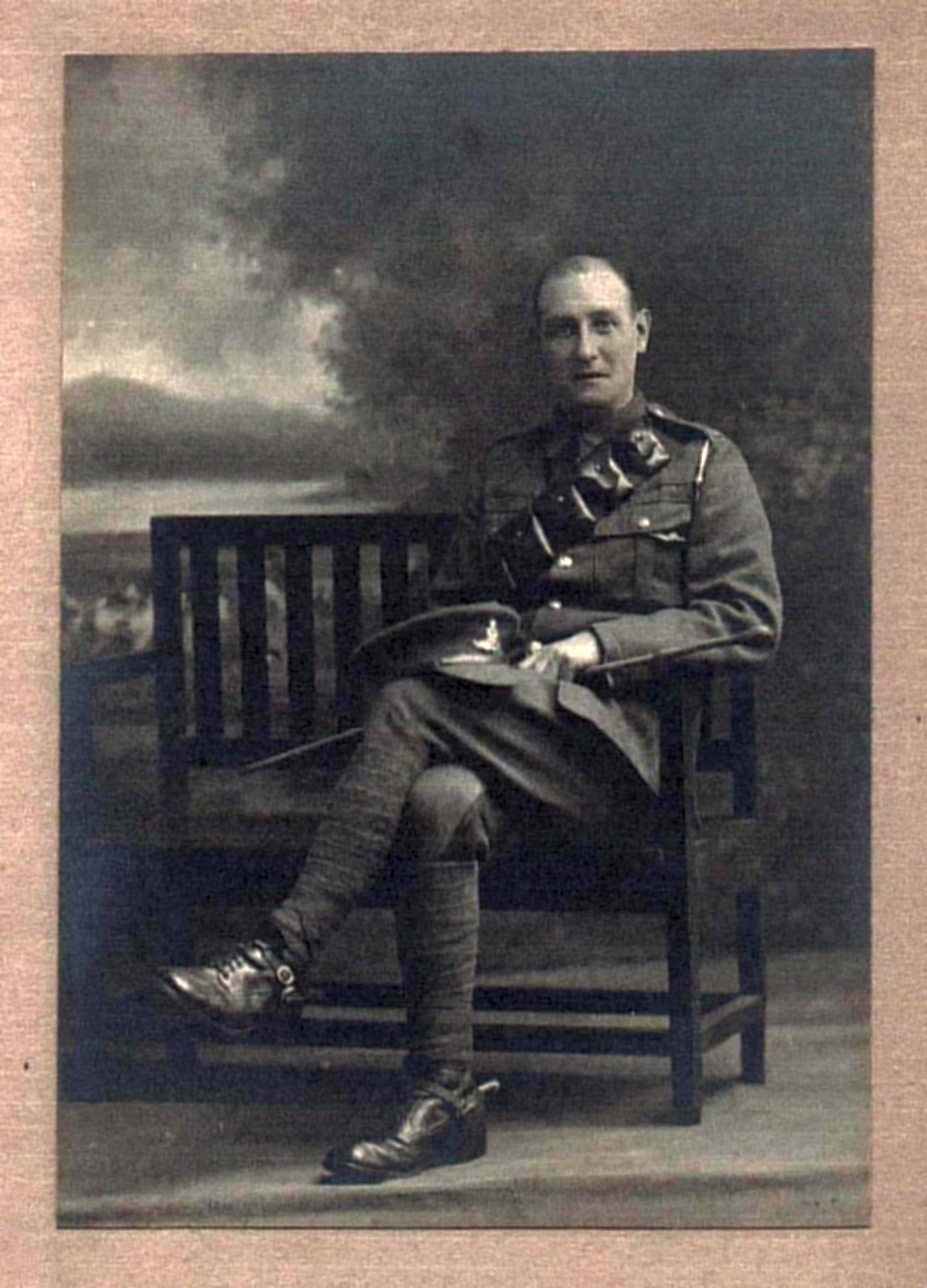 Thomas Townsend was born on 19 November 1877, in the Oxford parish of Holy Trinity, just to the north-west of Grandpont. His father Thomas (born 1847/48) was a college servant at Brasenose College. His mother Harriet was born in 1850/51. The couple married in October 1867 and had 14 children in total, 12 of whom were still alive in 1911 (two of Thomas's older sisters having died in childhood). The family initially lived in St Ebbe's (at 18 Commercial Road in 1871 and at 8 Cambridge Terrace in 1881) but by 1891 they had moved to 35 Western Road in Grandpont.

In January 1900, when he was 22, Thomas junior married Eliza [or Elizabeth] Amelia Sherlock in St Matthew's church in Grandpont. She was also 22 and had been born in High Wycombe, Buckinghamshire. Her father had served in the Oxfordshire Infantry, the forerunner of the Oxf & Bucks Light Infantry, and she had spent some of her childhood living in Cowley Barracks. The couple moved to 24 Buckingham Street and had a son, Reginald Spiers Sherlock Townsend, in June 1900; he was baptised at St Matthew's the following September. The family moved to 17 Western Road when Reginald was two.

In an interview in 1973, Reginald remembered his father with deep affection and as a 'great outdoors man', very fond of swimming (at Long Bridges bathing place) and of punting and rowing - he rowed for the Oxford College Servants' crew. Thomas had a friend who worked in the stables at the Randolph Hotel and he would sometimes borrow a pony and trap from there to take Eliza and Reginald out for a drive in the country, where they enjoyed long country walks. Thomas was also a connoisseur of red wine (as his father had been).

Before his marriage Thomas worked as a servant at New College but by 1900 he was employed as an underporter and servant to Henry Julian Cunningham, Fellow and Tutor at Worcester College, who also had a house at 8 Holywell Street. Thomas slept in college during the vacations and at home in Western Road during term time. As a schoolboy Reginald sang in the Worcester College choir.

Thomas enlisted in the autumn of 1915 under the Derby Scheme. He was invited to serve in Ireland by Captain Irwin, a former member of Worcester College. He joined the 59th Division of the Royal Horse Artillery and Royal Field Artillery (as a Gunner, service no. 811026) in Dublin and was there to witness the Easter Rising in 1916. He was then sent to Flanders. He died of wounds 10 December 1917, aged 40, in one of the casualty clearing stations close to Grévillers, having probably been injured during the German counter-offensives following the Allies' initial success at the Battle of Cambrai. The field ambulance would have brought him down the main road from Cambrai to Bapaume.

Thomas was buried at Grévillers British Cemetery at Pas de Calais, France. At the request of his wife and son, 'Peace perfect peace' was inscribed on his gravestone. His death is also recorded in Worcester College's Roll of Service and on the college's war memorial just outside the chapel, and on the war memorial of the church of St Peter-in-the-East which is now in housed in the church of St Cross at Holywell.

After Thomas's death Eliza and Reginald moved to 274 Abingdon Road. The bronze plaque sent to them by the government is held by the Oxfordshire Museums Service and can be seen by going to this website and typing 'OXCMS : 1976.431.3' into the search box. Plaques like this were sent by the government to the next of kin of every Commonwealth man and woman who died as a result of Great War service. The plaques were sometimes known as the 'Soldier's Penny', or the 'Dead Man's Penny'. There is more information about them here. Eliza was also sent Thomas' effects which amounted to £399 10s 1d. She never remarried; she died in 1953, aged about 75.

Henry Cunningham, for whom Thomas was servant at Worcester College, died on 22 November 1918, but not in the War - he died in the Acland Home, a private hospital at 25 Banbury Road in Oxford.

In 1928 Thomas and Eliza's son Reginald married Freda Dolley (1906-1991), the sister of Arthur Dolley. Reginald became a well-regarded member of staff at Parker's the booksellers in Broad Street. He served as a warden in the Oxford Civil Defence Service during the Second World War and was president of the Oxford Chamber of Trade in 1959. He died in 1979.

Thomas's parents Thomas and Harriet moved to 21 Whitehouse Road before the War. Thomas senior had worked as a bedmaker at Brasenose College since July 1877 and continued in post until his retirement in 1914. Bedmakers performed domestic activities and looked after rooms in college, as well as having other duties outside their main job; Thomas Townsend senior regularly waited on diners at the Phoenix Club, a college dining society, and in the Junior Common Room, the undergraduate students' group. In January 1882 the first staff Christmas dinner took place, at which the wives of servants were asked to join the Principal and Fellows at dinner; three wives were present, including Harriet Townsend. In 1916 Thomas was recorded as receiving a college pension of £40 a year. In October 1927 the couple celebrated their diamond wedding anniversary. Thomas died in March 1932 and his obituary appeared in The Oxford Times and was reprinted in the Brasenose College magazine, The Brazen Nose. His wife Harriet died two years later.

With thanks to Annabel Panting (great granddaughter of Thomas Townsend) for images and additional information; also to the Principal and Fellows of Worcester College and Emma Goodrum, Archivist, and to the Principal and Fellows of Brasenose College and Georgie Edwards, Deputy Archivist, for additional information. Click here for more information on the history of Brasenose College servants.

Henry Julian Cunningham, Fellow and Tutor at Worcester College. Cunningham lived on Staircase 5 and Thomas Townsend was his servant. Image (taken from the 1914 college photograph) by kind permission of the Provost and Fellows of Worcester College, Oxford. (Click image to close) 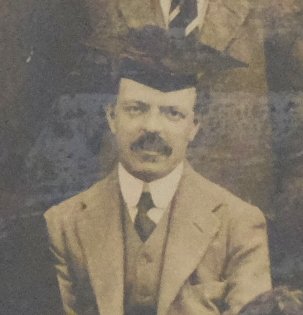 The Worcester College Roll of Service, which lists all the members of the college who fought in the First World War. Those in bold type (including Thomas Townsend) are the ones who died. Photographs courtesy of Emma Hill, by kind permission of the Provost and Fellows of Worcester College, Oxford. (Click either image to close) 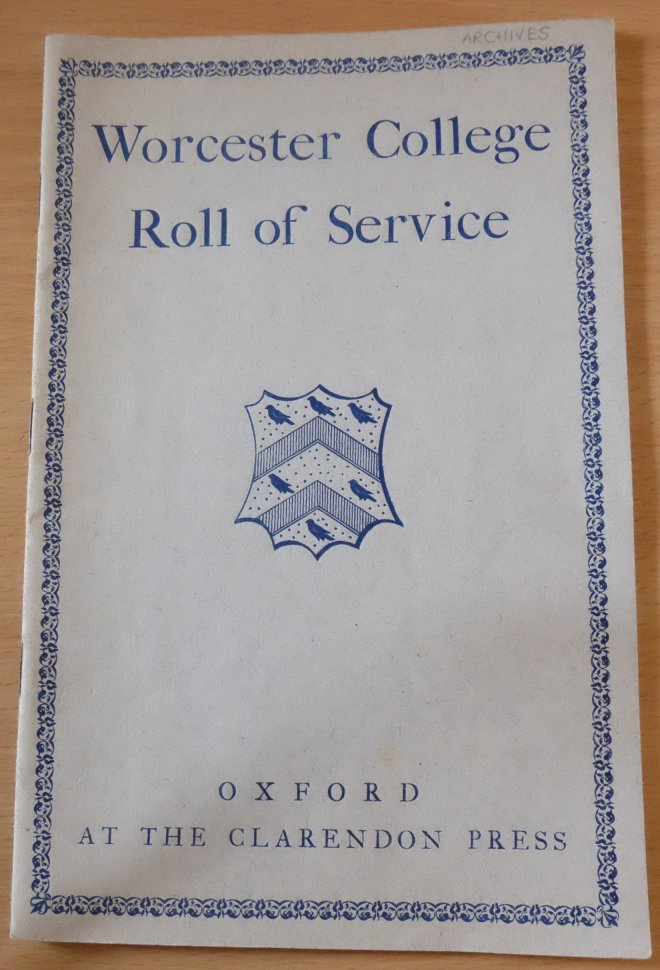 The Worcester College First World War memorial, just outside the chapel. The memorial lists all the tutors, fellows and students who died, and then the two college servants, SF Green and Thomas Townsend, right at the end. Photographs courtesy of Stephanie Jenkins and Emma Hill, by kind permission of the Provost and Fellows of Worcester College, Oxford. (Click either image to close) 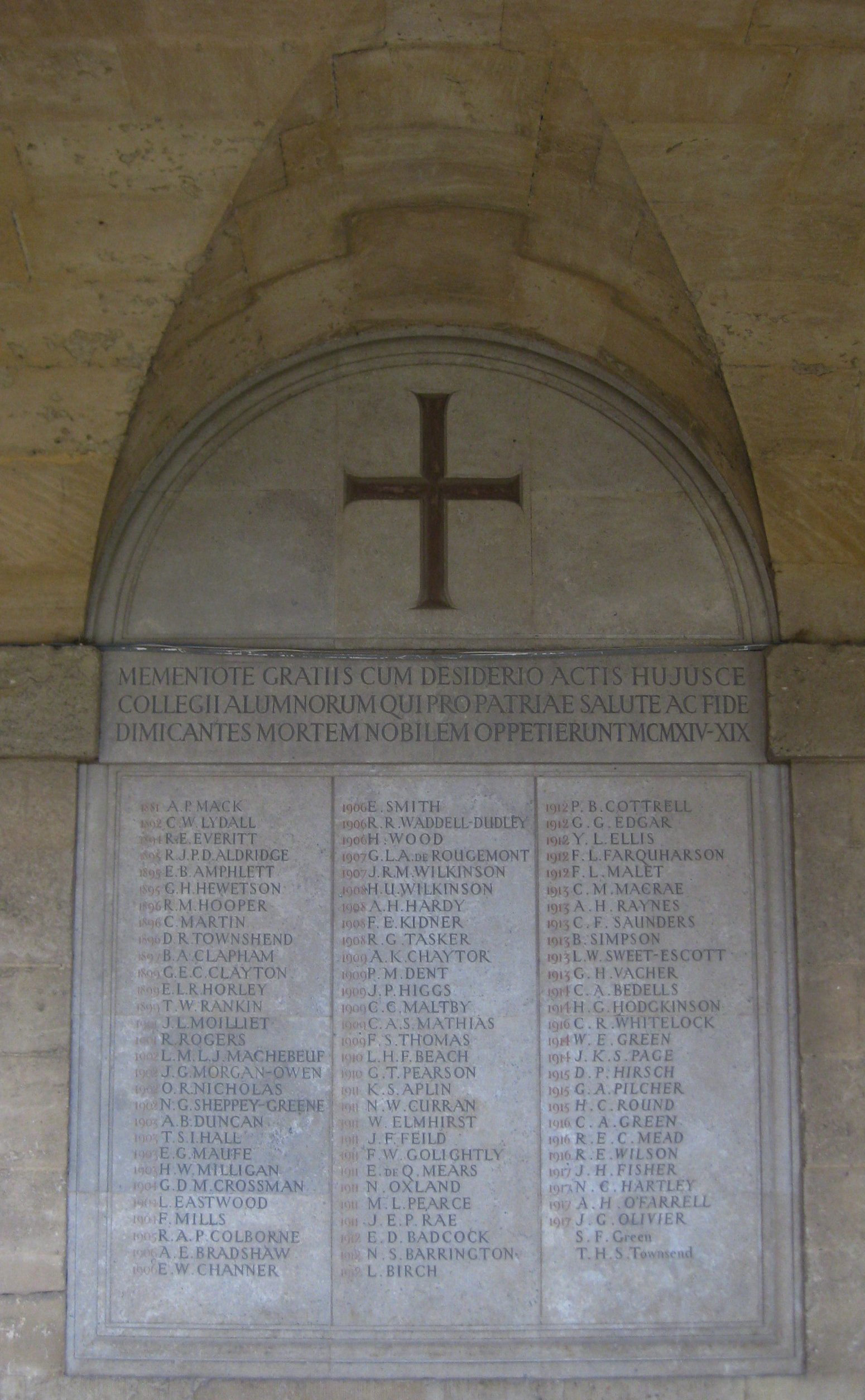 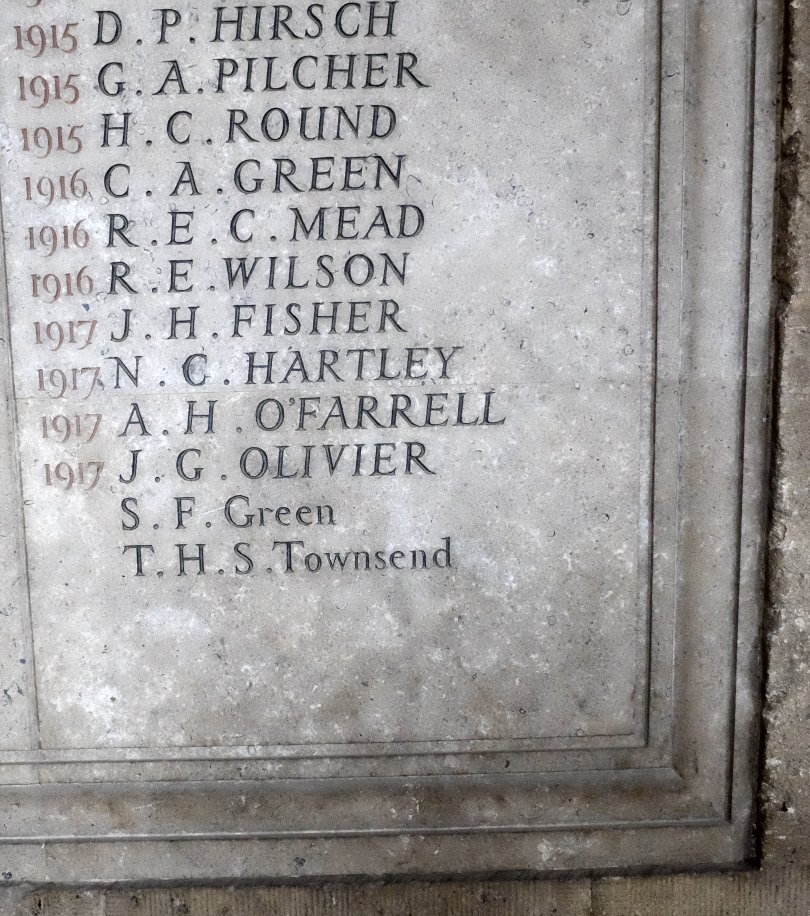 Reg and Freda Townsend in the 1930s. Photograph by kind permission of Annabel Panting, Reg and Freda's granddaughter. (Click image to close) 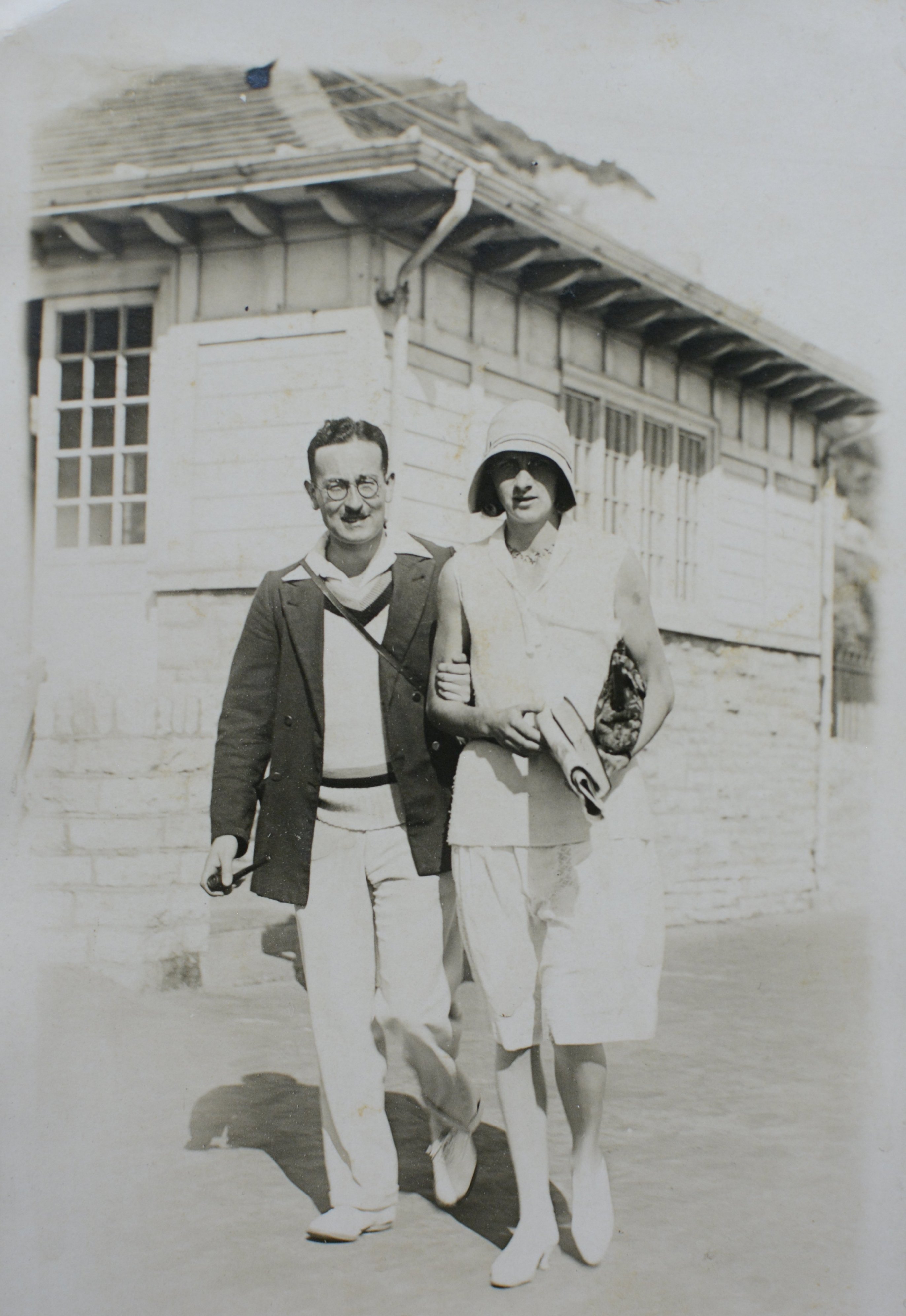 Thomas and Eliza Townsend with their son Reginald in around 1907. Photograph by kind permission of Annabel Panting, Reginald's granddaughter. (Click image to close) 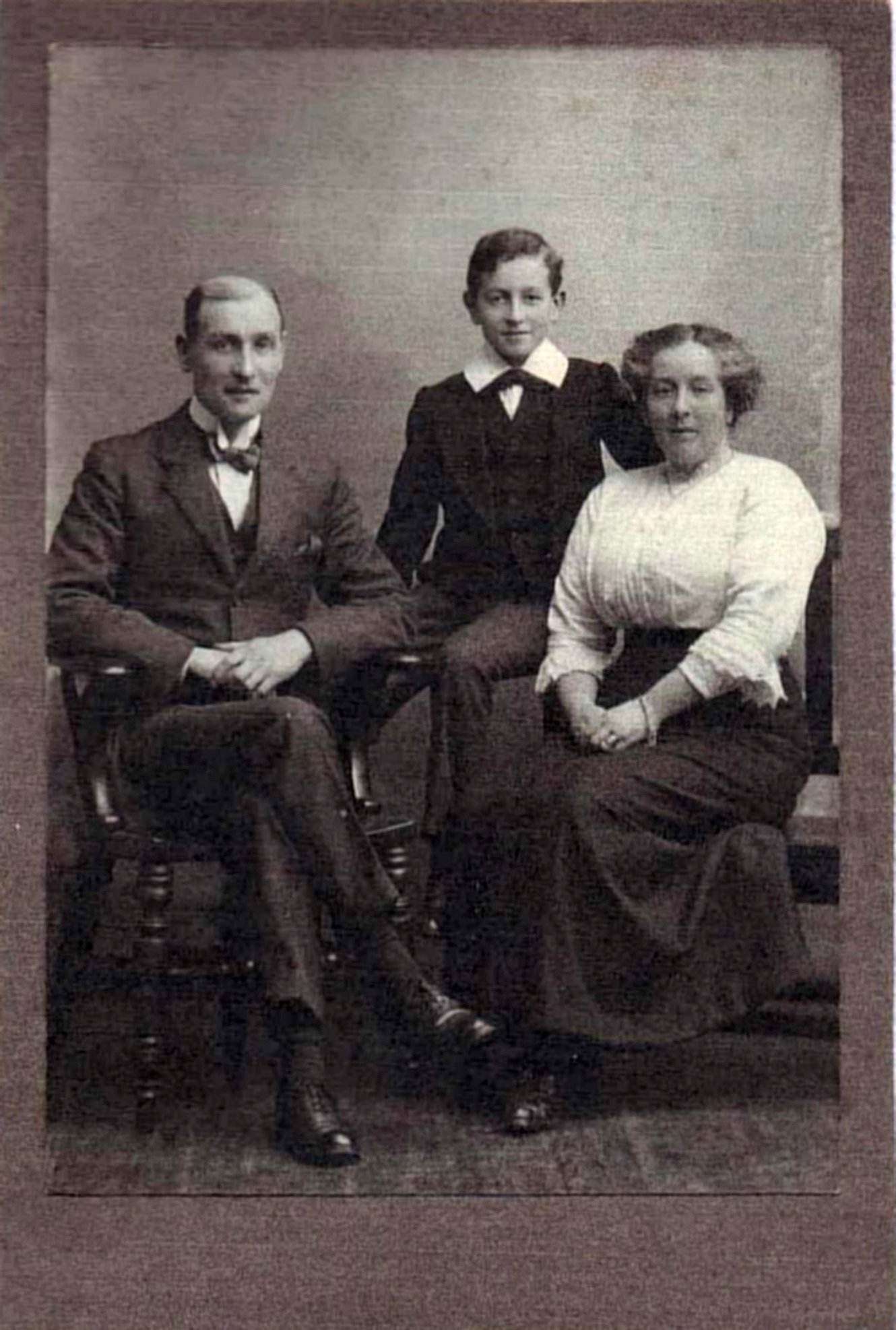