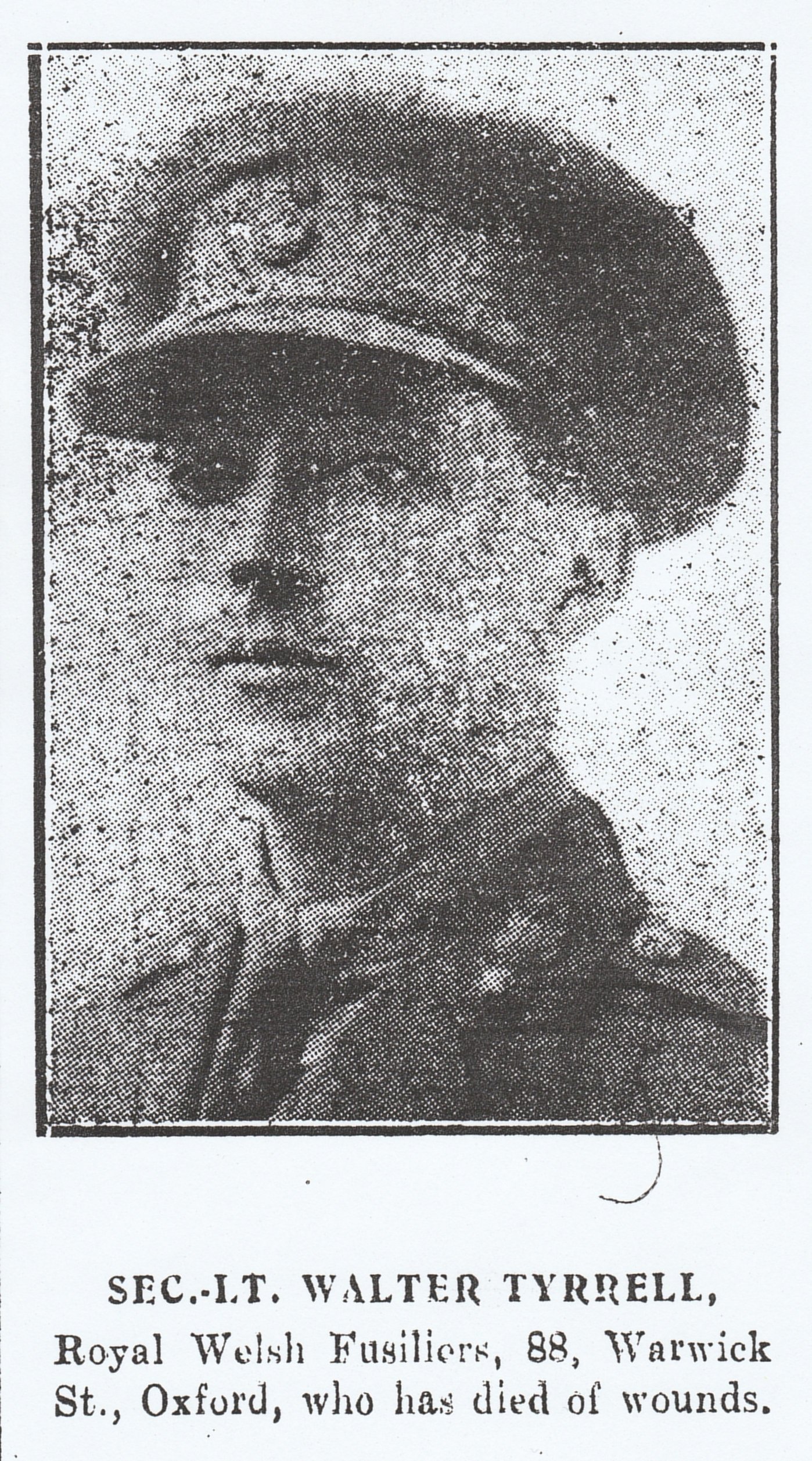 Walter Tyrrell is not named on the St Matthew's memorial, but he lived with his family on Chilswell Road in Grandpont until just before the outbreak of War. He is not named on the war memorial of SS Mary & John in East Oxford, the parish to which he moved when he married in July 1914. Nor is he, apparently, named on any other Oxford memorial. We have therefore decided to include him here, particularly as his widow Flora later married another Grandpont man, Herbert Saunders, the younger brother of Harry Saunders, at St Matthew's church.

Walter Tyrrell was born on 4 July 1888 in Headington. He was the youngest child of Thomas Walpole Tyrrell, a house decorator and builder, and his wife Alice, both of whom had been born in Rugby. They married in 1872/73, when Thomas was 24 and Alice was 20, and initially lived in Rugby where the first of their ten children, George, was born in 1874/75. The family then moved around the country a great deal; first to Derby, where their next child, Alice, was born in 1876/75 and then to Holyhead on the Isle of Anglesey in North Wales where Harriet was born in 1879/80. Charles was born in Burton-on-Trent in 1881/82, Henry in Hammersmith in London in 1884/85 and Florence in Rugby in 1886/87.

By 1888, when Walter was born, the family had moved to Oxford and in 1891 they were living at newly-built 44 Chilswell Road in Grandpont. The eldest son George was working as a painter, probably for his father. Thomas and Alice had had three other children, but they had died in infancy.

The family remained at 44 Chilswell Road and by 1901 George had left home; Walter's oldest sister Alice (now 24) was working as a dressmaker; Harriet (21) was a college student; Charles (19) was a cabinet-maker’s apprentice; and Henry (16) was a house-decorator’s apprentice (probably working for his father). Florence (14) and Walter (12) were still at school, Walter at St Aldates. In 1907, when she was 21, Florence married (at St Matthew’s Church) George Hadden, a Corporal in the Oxf & Bucks Light Infantry, who was 26 and from Cambridge.

By 1911 the Tyrrells had moved to 80 Chilswell Road and only Walter (now 22) was still living at home. He was working as a bootmaker and shop assistant. In July 1914, when he was 26, he married Flora Winifred May Brewer, of 88 Warwick Street in East Oxford, at St Aldates church. Flora was 19, a draper's assistant, and the daughter of Edward and Flora Brewer. Edward was a bookbinder and had formerly been art master's assistant in a school and an assistant in an art gallery (probably the Ashmolean).

Walter appears to have moved to his parents-in-law's house at 88 Warwick Street after his marriage. His parents left 80 Chilswell Road in 1914 and the house was taken over by the family of Bertram Coppock. By 1915 Walter had risen to be a surgical bootmaker and designer, the manager of a department.

Walter enlisted in Oxford in December 1915 and according to his army records he was 5' 9" tall, weighed 8st 13lbs and had a chest circumference of 35". He was mobilised for service with the 3rd Battalion of the Oxf & Bucks Light Infantry in August 1916, as a Lance Corporal. In January 1918 he took up a temporary commission as a Second Lieutenant with the 17th Battalion of the Royal Welsh Fusiliers which had been formed in Llandudno on 2 February 1915, and came under the orders of the 128th Brigade, 43rd division. Walter died of wounds at the Second Battle of the Somme on 4 September 1918, aged 30. Two British armies had started offensive operations on the 'old' 1916 Somme battlefield; this time their advance was rapid and ultimately decisive. Walter was buried at the Varennes Military Cemetery on the Somme. At the request of his widow Flora his headstone is inscribed 'He is not dead but sleepeth'.

Walter and Flora had had another child during the War: Marion, born in early 1918. She and her brother Harold were only 9 months and 3½ years old respectively when their father died.

Flora continued to live at 88 Warwick Street after the War. In June 1923, when she was 29, she married Herbert Charles Saunders, the younger brother of Harry Saunders. Herbert had fought in the War and he and his family lived at 256 Marlborough Road. The wedding was at St Matthew's church in Grandpont; his occupation was recorded as 'organiser'.

Tyrrell was a common name locally and there were at least nine Tyrrell households living in St Aldates and South Oxford during the War, including that of George Tyrrell. However, as Walter's parents both came from Rugby, his family do not seem to have been closely related to that of George.