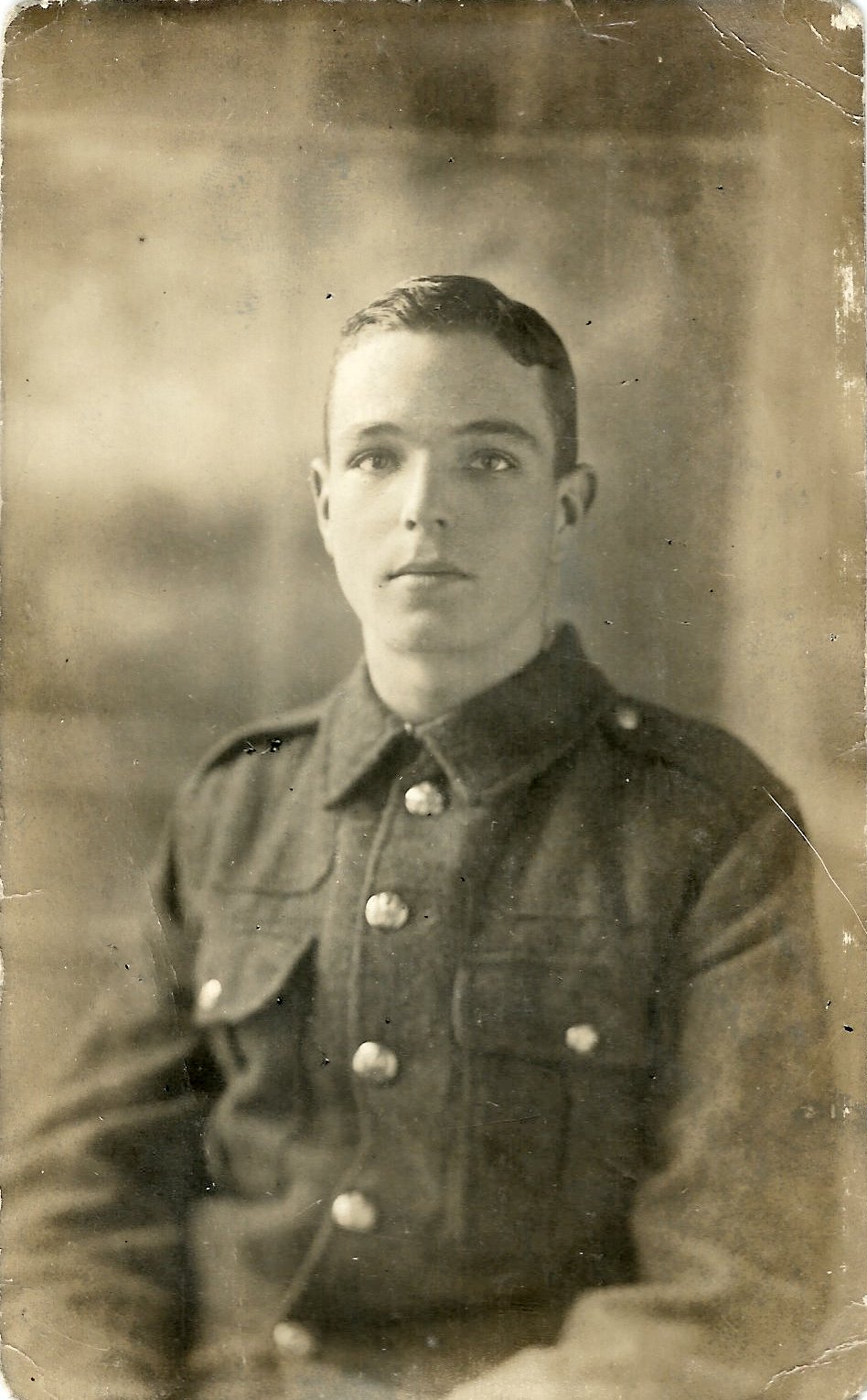 Charles Tyrrell (known as George) was born on 4 August 1895 in Oxford, the son of Charles John Tyrrell, a clerk at the St Ebbe's gasworks (and A Freeman of Oxford), and his wife Sarah Ann (née Crowson). He was baptised at Holy Trinity church on Blackfriars Road in St Ebbe's, just across the river from Grandpont, which was the home parish of his father. He had a younger brother, Richard (or Dick, born 18 August 1898), and the family lived at 15 Cobden Crescent in Grandpont.

George was a member of the 20th Oxford Scout Troop and was heavily involved with the St Matthew's Sunday School. He was educated at the Oxford Wesleyan School and at New College School. In 1905 he became a chorister at The Queen's College and sang there for eight years; he also sang in the choir of Holy Trinity church. Here are some photographs of him taken before the War.

On leaving school George worked as a junior clerk for James Langley, a solicitor with offices on Cornmarket, and a year later he got a job at Barclays Bank on the High Street [now the site of the Old Bank Hotel]. On 19 October 1914, fifteen months after starting at Barclays, George enlisted with the 2/4 Battalion of the Oxf & Bucks Light Infantry. He underwent training in Oxford and in Northampton. In March 1915 he was transferred to the 1/4 Battalion of the Oxf & Bucks Light Infantry as a Private, service no. 3527. He was sent to France, and to Hebuterne on the Western Front in mid July 1915. George was killed there by shell fire, on new year's eve 1915. The 1/4 Battalion was one of the first British units in the Somme sector and had held the line in front of Hebuterne since 20 July. The War Diary of the 1/4 Oxf & Bucks describes the action on the day that George died: ‘December 31st - Artillery bombardment as per programme. The enemy replied and caused us 6 casualties in Trench 31. Shelling from both sides continued intermittently all day. At 10.55pm the Germans opened rapid fire with machine-guns and rifles, at the same time putting up a lot of flares and rockets. This soon subsided, and it was probably done to usher in the New Year, German time being 1 hour 5 minutes in advance of ours. Casualties: 3 men killed and 4 wounded.' George was 20 when he died, and had just had a week's leave at home in Oxford for Christmas.

George was buried at the Hebuterne Military Cemetery, Pas de Calais, France. There is a photograph of his gravestone here. As well as being named on the war memorial in St Matthew's, there is also a special marble memorial to George on the northern wall of the church. Its design is identical to that of a nearby memorial to William King. George is named on the memorial to former pupils at New College School and because he was a chorister at The Queen's College he is also commemorated on the memorial there, and on the war memorial of Holy Trinity church where he sang in the choir.

George's brother Richard attended City of Oxford High School for Boys in George Street [the building is now part of the university's History Faculty]. Like George he was a chorister, and he was a talented artist. He also went to fight, in France in July 1915, with the 509 Siege Battery, Royal Garrison Artillery (service no. 158845). He survived, and went to Germany after the War as part of the Army of Occupation. He later became an architect. He married Violet and had two sons, Lawrence and Richard. Violet died when the boys were in their teens and much later Richard (senior) married Doris Norgrove, the sister of Reginald Norgrove. After Richard (junior)'s death in 2019, his son Geoff found George's 1914-15 Star amongst other family treasures in a box in the attic.

George and Richard's parents placed this 'In memoriam' notice in The Oxford Times in January 1916, a year after George died. He had been particular friends with Reginald Norgrove and Horace Tallett and for fifty years thereafter, until the mid 1960s, this notice appeared annually in The Oxford Times, placed there in later years by Reginald's brother and sister, Frank and Doris, and by George's brother Richard.

In early 2020 a series of letters, written by George from the front in the weeks leading up to his death, came to light. The Oxford Mail covered the story for Remembrance Day 2020.

The Tyrrells were an extensive local family and there were at least nine Tyrrell households living in St Aldates, Grandpont and South Oxford during the War. George's great nephew Geoff Tyrrell has traced the family back to Drayton (near Abingdon) where they were farmers going back many generations. The family of Walter Tyrrell came originally from Rugby, and do not seem to have been closely related to that of George.

(Charles) George Tyrrell in the garden of the family home at 15 Cobden Crescent in (left) 1911 and (right) 1913. Reproduced by kind permission of Geoff Tyrrell. (Click on either image to close) 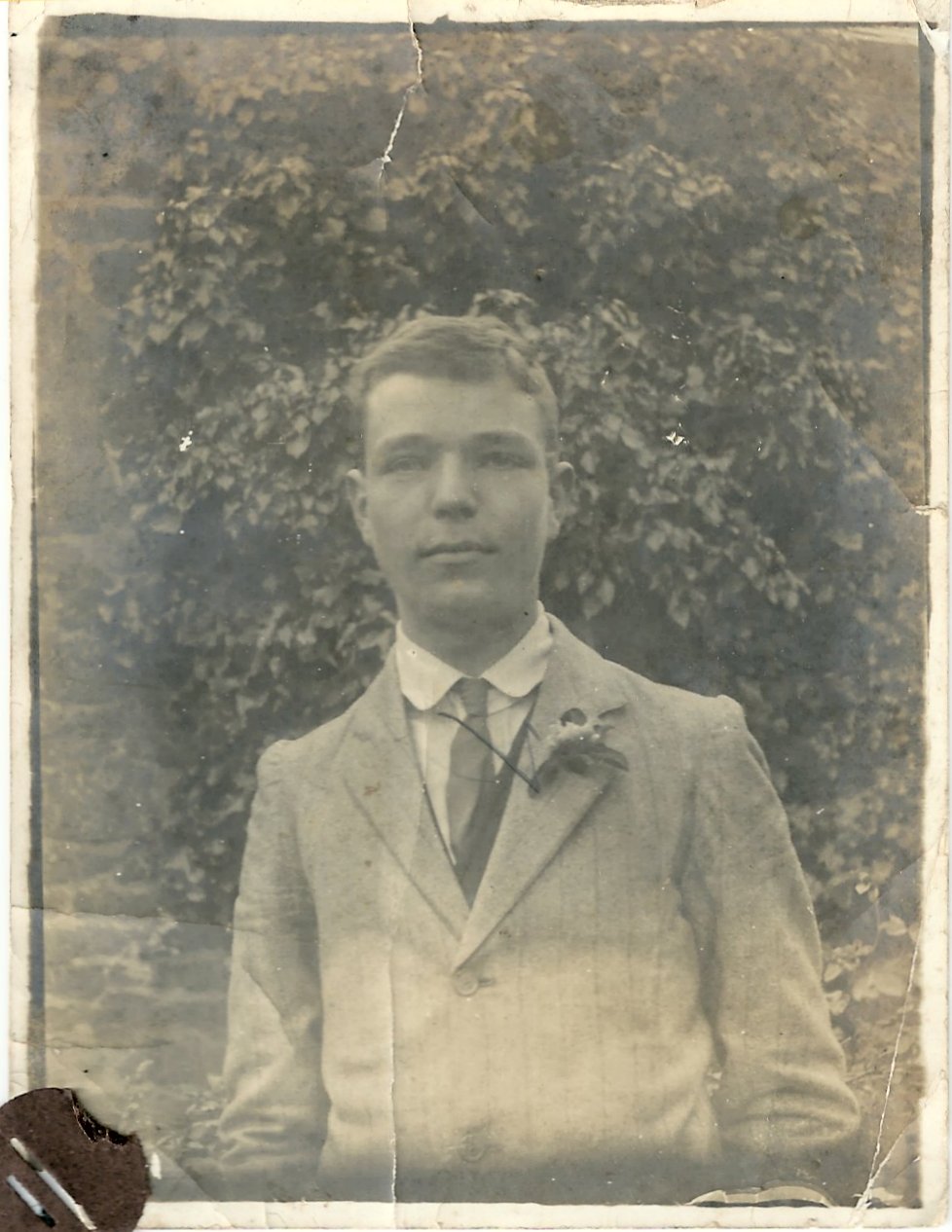 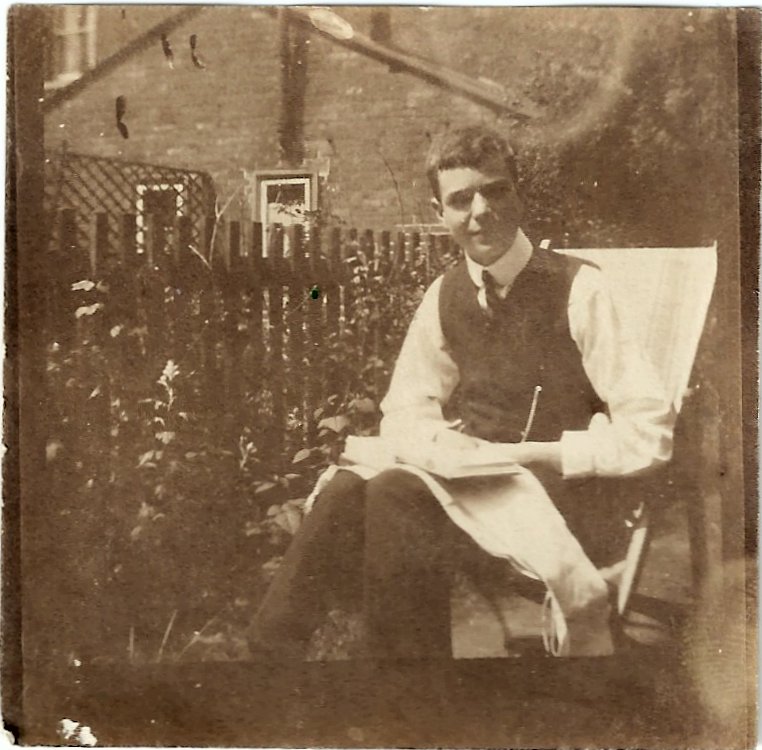 Richard Tyrrell in the garden of the family home at 15 Cobden Crescent in 1916. Reproduced by kind permission of Geoff Tyrrell. (Click on image to close) 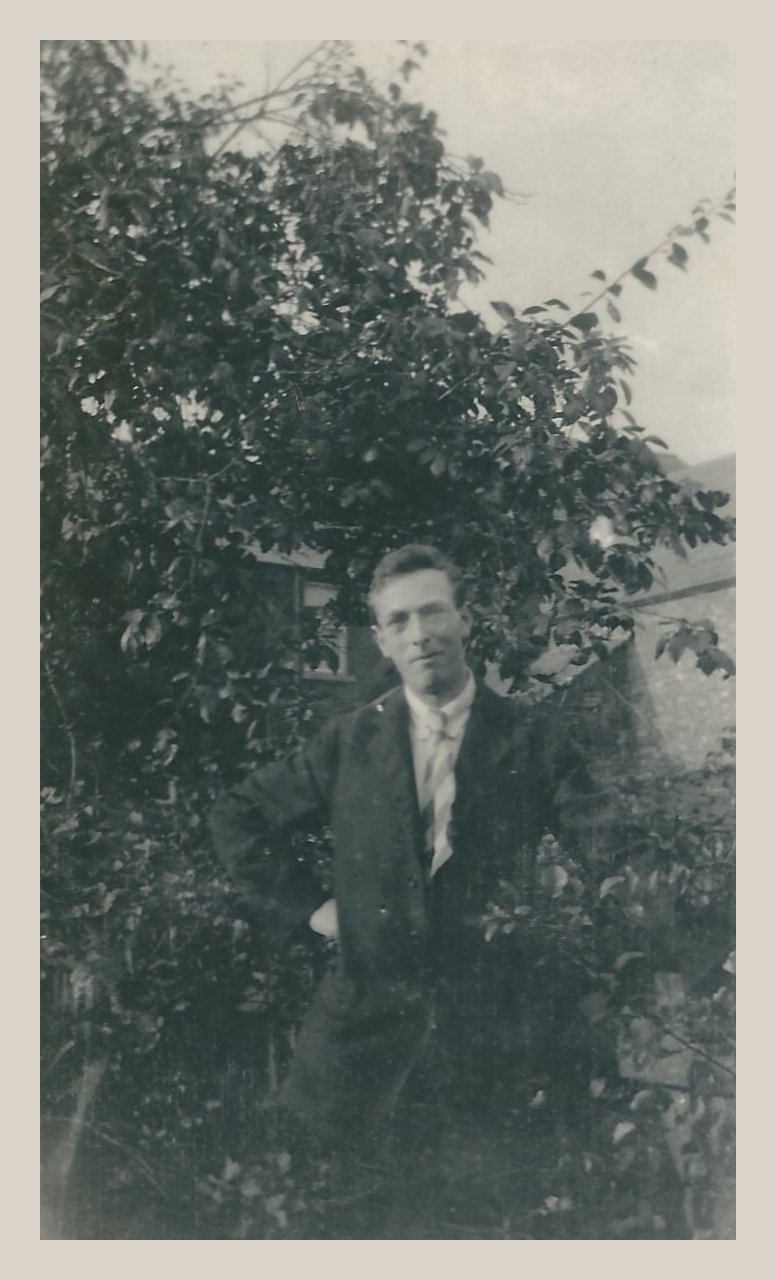 Richard Tyrrell (right) at Schlebusch in Germany, 1919. Reproduced by kind permission of Geoff Tyrrell. (Click on image to close) 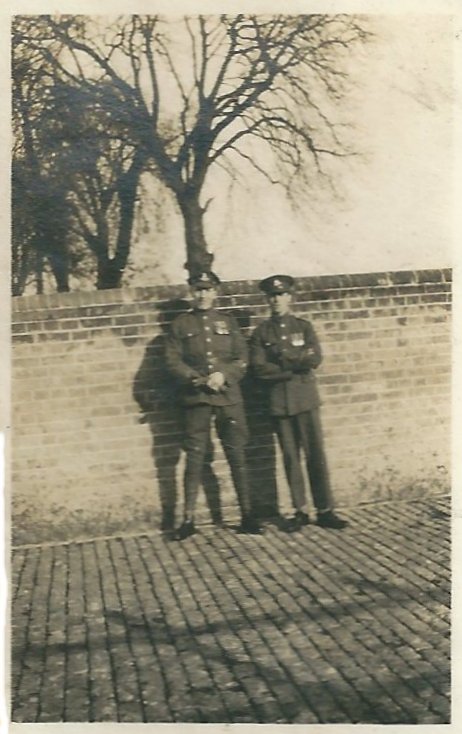 The 1914-15 Star awarded to George Tyrrell. Reproduced by kind permission of Geoff Tyrrell. (Click on either image to close) 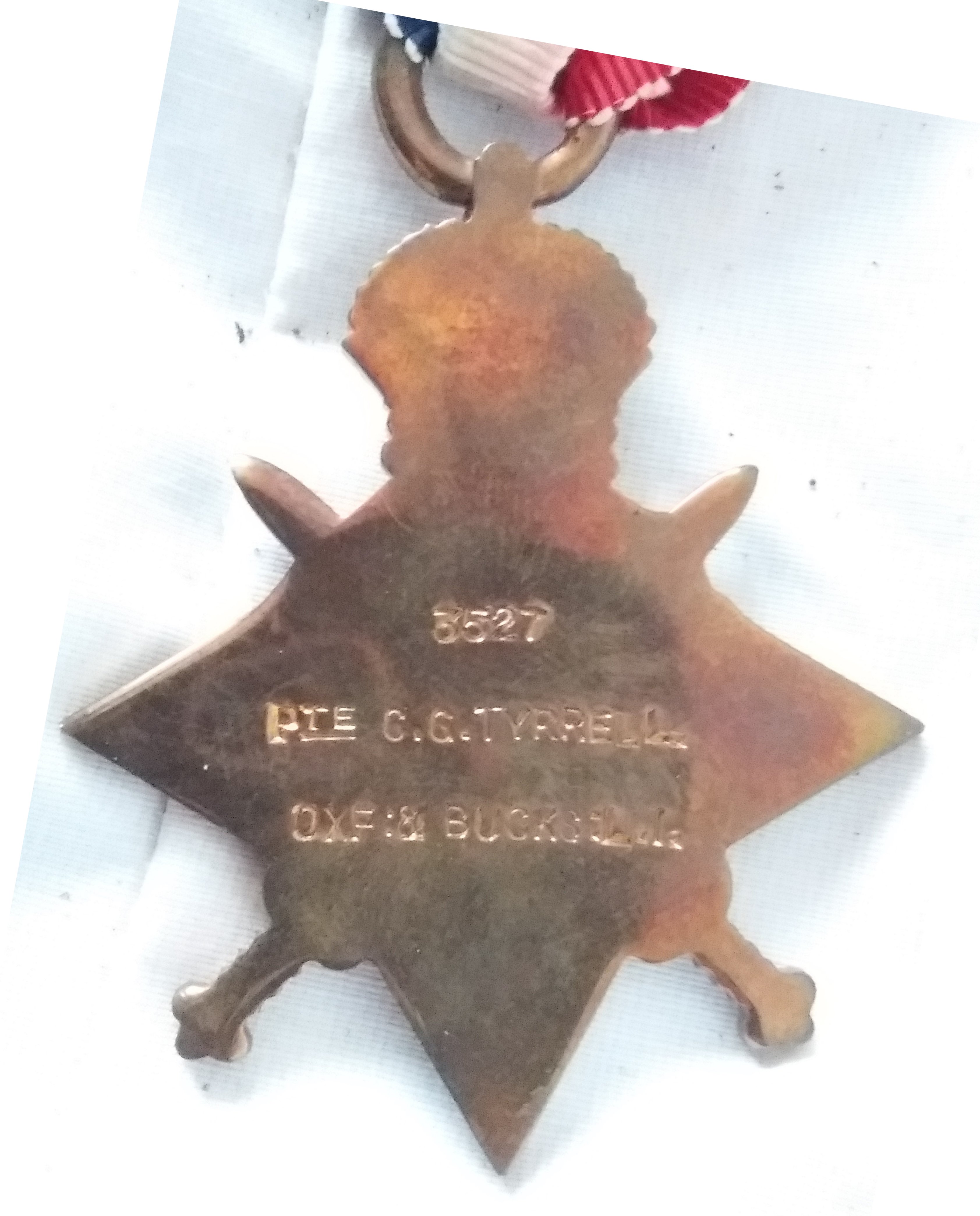