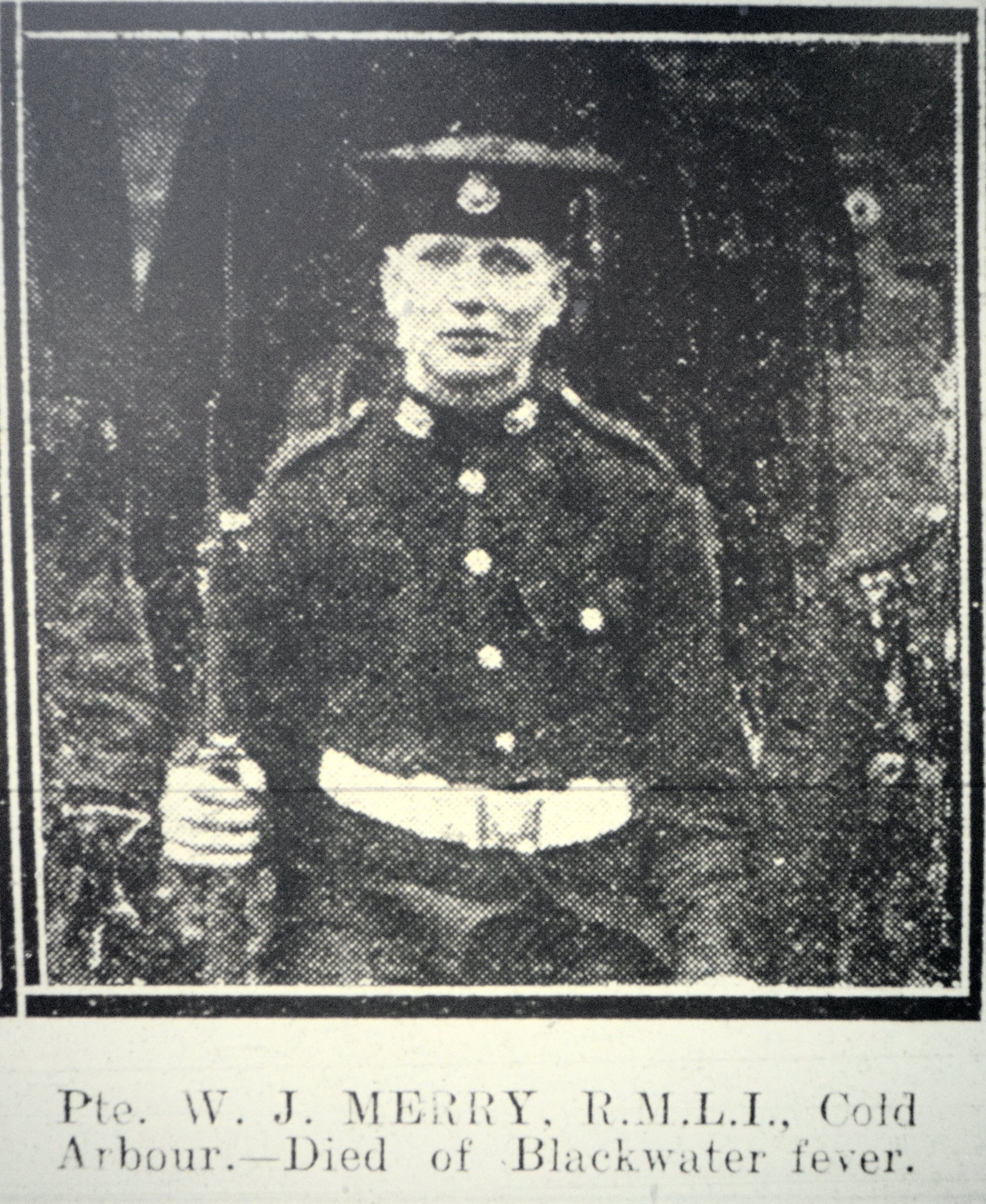 William Merry was born in the parish of Cowley St John in Oxford on 23 October 1897, the second son of Spencer and Ellen Merry. His father was a builder’s labourer and later a painter; his mother was a laundry worker. They were both born in 1870/71, Spencer in Horton-cum-Studley, six miles north-east of Oxford, and Ellen in Abingdon. They married in 1893/4 and moved to Oxford to live at 5 Weirs Lane, at the southern end of the Abingdon Road, in the area known as Cold Harbour. They had seven children: Lilian (or Lily, born 1893/94), Joseph (1895/96), William (1897/98), George (1899/01), Ethel (1902/03), Ellen (1906/07) and Ernest (1907/08). By 1911 the family had moved to Woodbine Cottage on the Abingdon Road (just south of the junction with Weirs Lane) and the oldest daughter Lilian had left home to work in domestic service. Joseph was working as an errand boy for a boat shop and the other five siblings were still at school. On leaving school William found work as a carter.

In June 1915, when he was still only 17, William enlisted in London with the Royal Marine Light Infantry and became a Private, service no. 18395. His army records describe him as being 5' 7" tall and having brown hair, blue eyes, a fresh complexion and a scar across his chin. His religion was 'Wesleyan'.

William served on various ships at Deal and at Portsmouth before joining HMS Hyacinth as part of the East African Expeditionary Force in February 1916. He was sent to fight in what is now Tanzania, under the command of Brigadier General Charles Newsham Trotman. The strategy of the German colonial forces, led by Lieutenant Colonel Paul Emil von Lettow-Vorbeck, was to divert forces from the Western Front to Africa. From the Allied invasion of 1915, the Germans managed to fight an effective campaign right up until the Armistice. William died on 17 March 1917 from blackwater fever, aged 20, in Dar es Salaam, the capital of German East Africa. He was buried at Dar-es-Salaam (Sea View) Cemetery, Tanzania.

Five of William's siblings were married in St Matthew's church: Lily just two months after her brother died, in May 1917, to Robert Dean, who was from East Oxford and worked for the city corporation. In August 1922 Ethel married Edward Bulgin, who was a bus conductor. In May 1924 Joseph (now a bootmaker) married Victoria Kinch, who was from Buckland (which was then in Berkshire). On Christmas Day 1925 George married Daisy Horn, whose family lived almost next door at 1 Weirs Lane. They moved to 1 Weirs Lane and had at least three children who were baptised in St Matthew's; the second was named William after his deceased uncle. George worked as a painter, a builder and later a ferryman (probably on the free punt ferry which operated from Weirs Lane). In April 1929 William's sister Ellen married William Field, a railway engine cleaner from Jericho. At her marriage Ellen was working as a shop assistant.