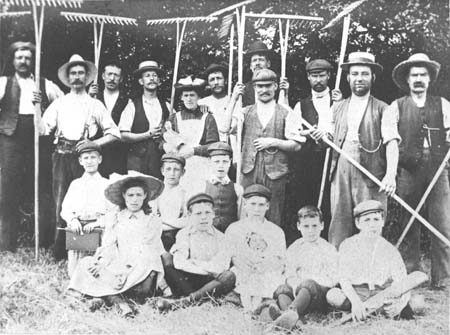 Dean's Ham is the area of open meadowland to the west of the houses at the southern end of Marlborough Road; their gardens back on to it. The name 'Dean's Ham' seems to derive from the Old English 'denu', meaning valley, and 'ham' meaning field or meadow i.e. a field or meadow at the bottom of a valley or, in this case, on the Thames flood plain. In the late 19th century and early 20th century the meadow was also sometimes know as 'Archer Cowley's field' because the southern end of Marlborough Road was originally called Archer Street.

John Slatter was the owner of the meadow in 1844 and Moses Brooks was the yearly tenant. John Slatter was the nephew of Henry Slatter, founder of Slatter & Rose’s bookshop on the High Street. John Slatter died in 1890, and via a complicated chain of bequests, the land eventually came into the hands of his daughters Bessie and Sarah. In the early 20th century Thomas Hathaway, a horse-dealer, leased the meadow from the Slatter family, and in the First World War hay was cut here and sent to the Western Front for the army's horses.

In 1926 the Slatters sold the meadow to Oxford City Council for £1,000; by the early 1930s it had become a council recreation ground which originally included the area to the south now occupied by allotments. There was a wooden footbridge across Eastwyke Ditch linking the two parts. It was a wonderful play area for local children, though only those aged under 14 were allowed on to it. In the inter-war period circuses and carnivals were held on Dean's Ham; in the 1950s an oval cycle track was laid out on it and it was home to the South Oxford Football Club.

The open area to the north of Dean's Ham, across Whitehouse Lane, was where Tuckwell's had their gravel works. The lane was sometimes called Tuckwell's Lane. It led to Grandpont Farm, which the Tuckwell family owned, and also to the railway line. Now there is a bridge to take pedestrians over the tracks and to Hogacre Common, but it used to be a level crossing with a gate in the fence. Mrs Ida Awde, who as a young child lived in her grandparents' house on the Abingdon Road, remembered her and her friends standing by the gate and charging people a penny to open it. Sometimes people paid!

Grandpont from the air, 1918. St Matthew's church and the Whitehouse football ground can be seen at the centre right of the picture; Whitehouse Lane (bright white in colour) runs westwards from the south-west corner of the football ground, across fields and out to Grandpont Farm. It then turns south-west to cross the railway line on a level crossing. Image © Oxfordshire History Centre. (Click image to close)