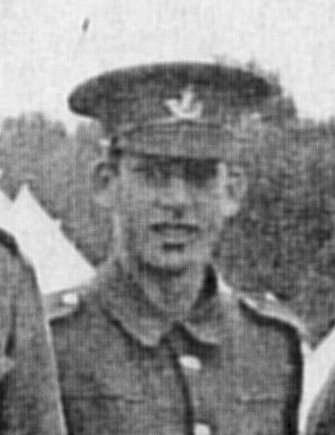 Arthur Belcher was born in Oxford in April 1896, the eldest son of Joseph Belcher (born 1872) and Annie Belcher (née Rainbow). Annie had been born in 1873, the youngest of eleven children, in Hanslope in Buckinghamshire. She came to Oxford in her teens and in 1891 was working as a housemaid for a rector's daughter at 115 Woodstock Road. She married Joseph (known as Joe) on 2 April 1895.

By 1901 the family were living at 21 Marlborough Road in Grandpont. Joe was a postman; Arthur (aged 5) had one sibling, Fred, aged 3, and their paternal grandfather, James Belcher (a widowed mason) was living with them. In 1906 the family moved to 48 Chilswell Road, next door to the family of James Prestidge, and by 1911 Joe was working as a sorting clerk and telegraphist. Arthur was now 15 had two younger brothers, Fred (now aged 13) and Aubrey (aged 5, born above Tommy Atkins' shop on the corner of Chilswell Road and Kineton Road, on Christmas Day 1905), and all three were at school. Arthur was educated at the Central Boys' School on Gloucester Green, and later the City Technical School in St Ebbe's. On leaving he was employed as a clerk at Elliston & Cavell, the well-known department store on Magdalen Street (later Debenhams). He was also a member of the YMCA for whom he played cricket and football.

Arthur joined up at the outbreak of hostilities, when he was 18, and became a Sergeant in the 2/4 Battalion of the Oxf & Bucks Light Infantry, service no. 200883. [Some sources give his rank as Lance Sergeant, a slightly more junior rank.] This battalion had formed at Oxford in September 1914 as a second line unit of territorials (volunteers). Its members had not signed up to serve overseas and this remained their status until after conscription was introduced in 1916, when all single men of fighting age could be sent overseas whether they had agreed or not. In early 1915 the battalion was attached to 184th Brigade in 61st (2nd South Midland) Division. This photograph shows Arthur and Percy Collinson billetted at Epping in Essex. Arthur sent this postcard to his mother in Oxford when he and 13 other recruits from Oxford went back to Great Waltham, near Chelmsford, on 7 December 1915 to be trained in the use of machine guns. The group probably included Albert Oliver. They put up tents on land beside the pub, referred to in the regimental diary as the 'Camp Field and Resting Field'. This patch of land led through to the grounds of Colonel Tuffnell's manor house, Langleys, and locals remembered that soldiers camped there and shot deer in the manor's deer park, to eat.

In January 1916 the battalion moved to Parkhouse Camp on Salisbury Plain and it was subsequently sent to France, landing on 24 May 1916. The 61st Division (to which the 2/4 was attached) fought at the Third Battle of Ypres, popularly known as Passchendaele, and was involved in fighting around St Julian on 19, 22 and 27 August 1917. The fighting on the 22 August was particularly fierce: 66 soldiers from the 2/4 Battalion were killed on that day as well as three officers. Arthur was probably injured at that time and his friend from Grandpont Albert Margetts was one of those killed.

Arthur was evacuated to the base hospital in Rouen and may have had his arm amputated. His parents Joe and Annie asked to visit Arthur in hospital but permission was refused. He died of his wounds on 7 September 1917, aged 21. He is buried at the St Sever Cemetery Extension in Rouen. His gravestone is carved with an inscription requested by his father: 'A dearly beloved son' and his death was reported in the Oxford Journal Illustrated on 10 October and in The Oxford Times two and a half weeks later.

During the War Arthur's father Joe worked in the Post Office telegrams department, so must have seen the casualty messages coming in first hand. After the war he and Annie travelled to France and visited their son's grave in the St Sever Cemetery.

Arthur is also commemorated on the First World War memorial of the Central Boys' School, which is now housed in the library of Oxford Spires Academy in East Oxford.

Arthur's younger brother Fred also went to fight - he was a Sapper in the NA Cable Section of the Royal Engineers (service no. 528177). He was recorded in the 1918 electoral register as being absent and away fighting. He served in the Middle East and was in the cavalry. He survived the War, and came home in 1919. He died in 1980 aged 82.

Arthur's youngest brother Aubrey was too young to fight in the War. However, he was badly ill during the Spanish influenza pandemic which swept across Europe in 1918-19. He attended the Oxford Boys' High School (on George Street) and in 1921 joined the Bodleian Library as a Junior Assistant. Aubrey died in September 1993 aged 87. Here his son David recalls family memories.

Here is a photograph of Arthur, Fred and Aubrey's mother Annie in later life. She and Joe had had the chance to buy 48 Chilswell Road but could not afford the £200 asking price. Annie eventually had to leave the house in 1966/67. At that time the toilet was outside and the water supply consisted of one cold water tap in the kitchen. Annie's husband Joe had died in 1949, aged 77, and she died June 1972, aged 98.

The postcard of 'Great Waltham, Minnows Mede' [a brook running alongside the houses] sent by Arthur Belcher to his mother at 48 Chilswell Road, Grandpont, Oxford, in 1915. It reads: Dear Mother, Arrived at our old billet again all right. Address MGS [Machine Gun School], 'B' C[ompany] of 2/4 OBLI, Gt Waltham, Essex. Yours, Arthur. X is our billet [and he has marked an 'X' on the left-hand side of the photo, opposite where the pony and trap have stopped]. Reproduced by kind permission of Tanya Mitchell. (Click on either image to close) 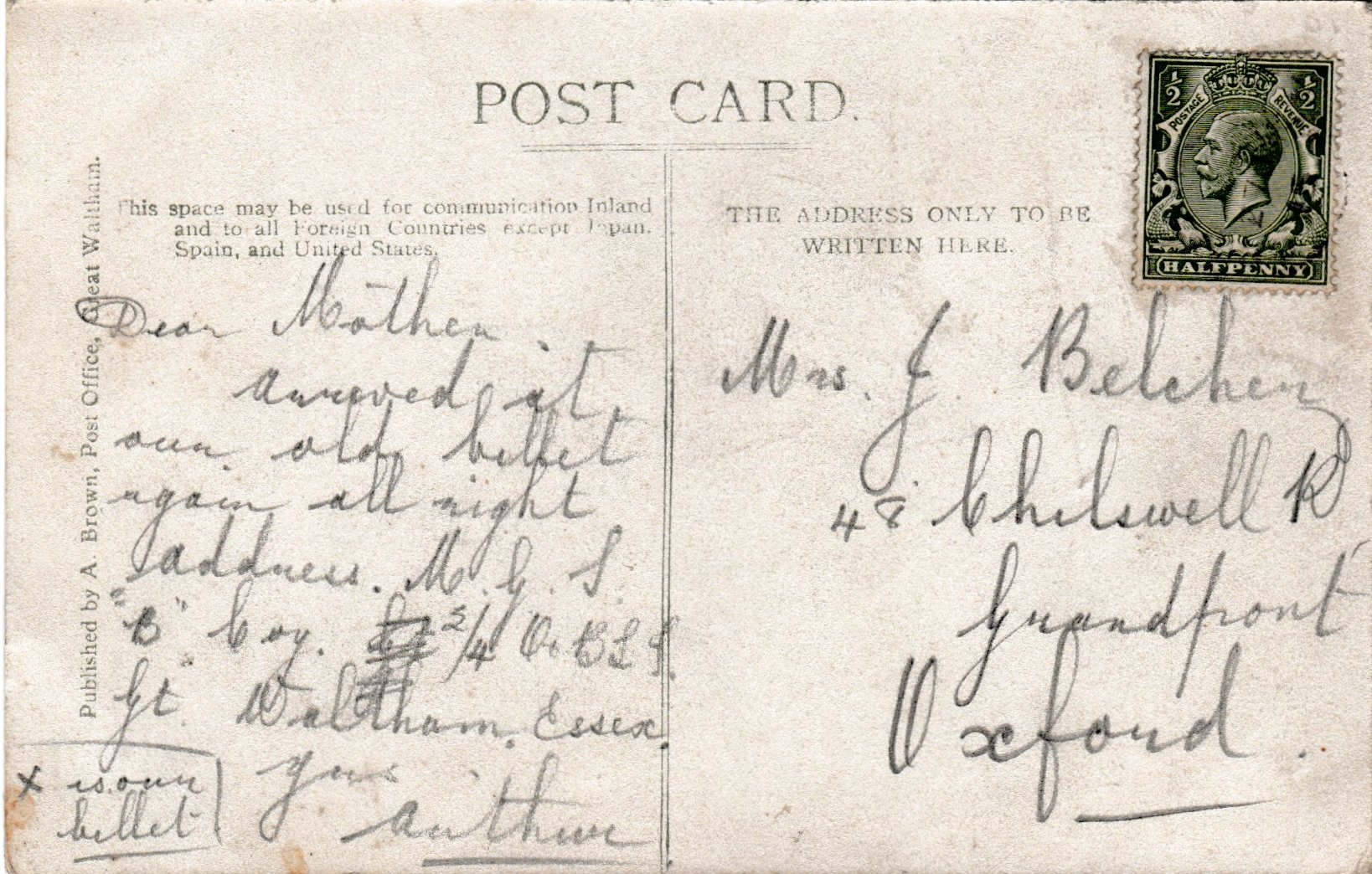 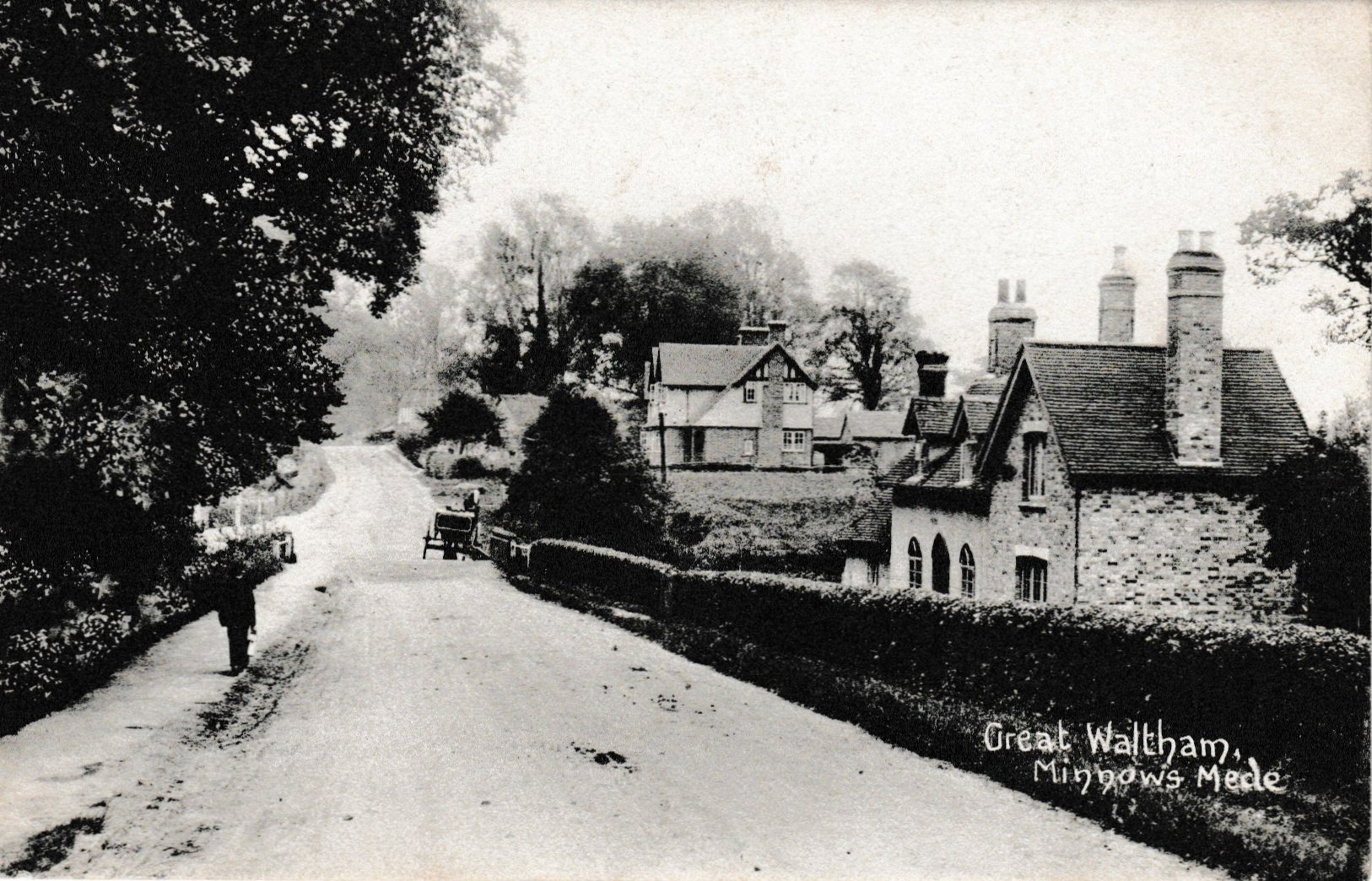 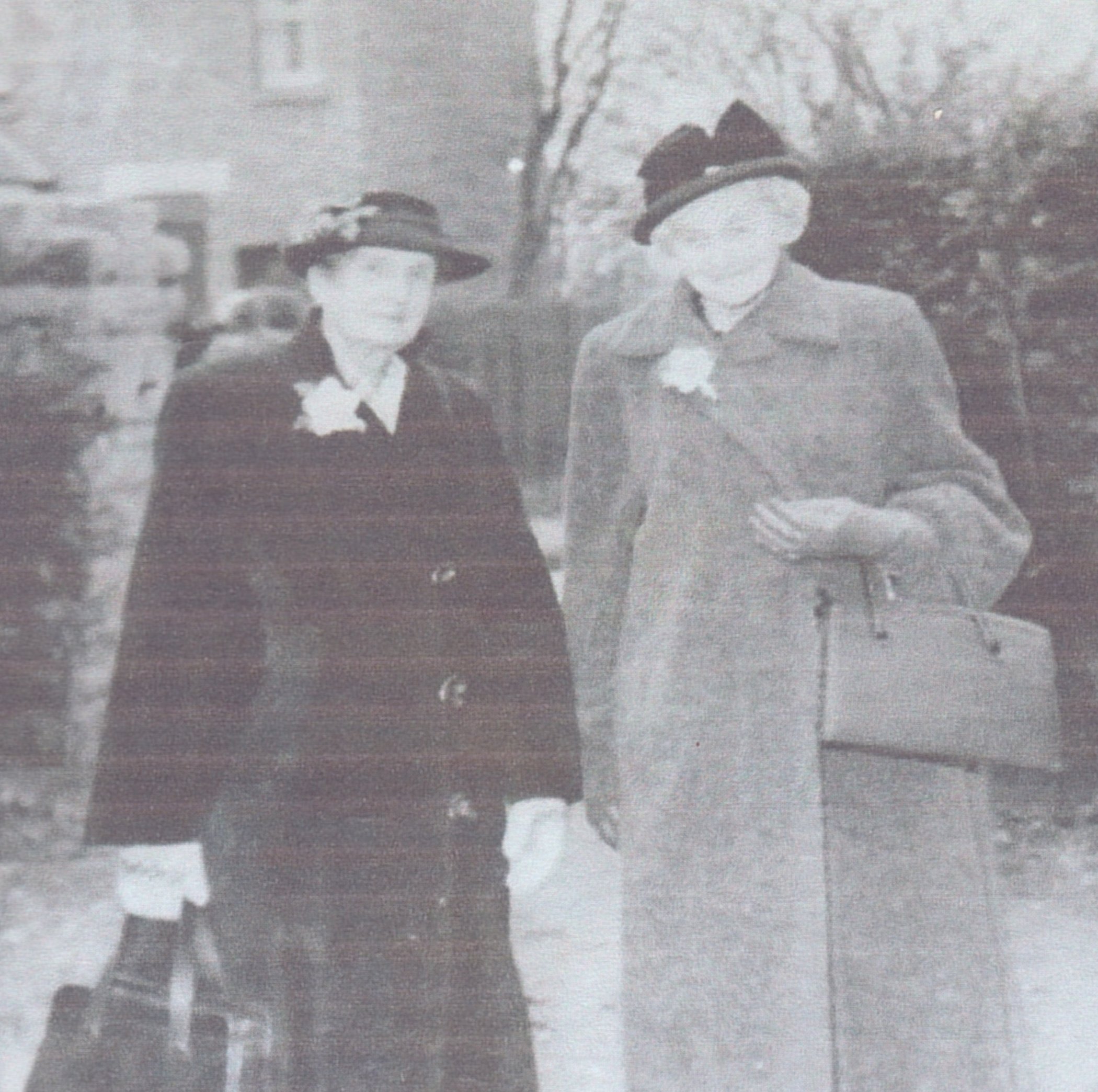