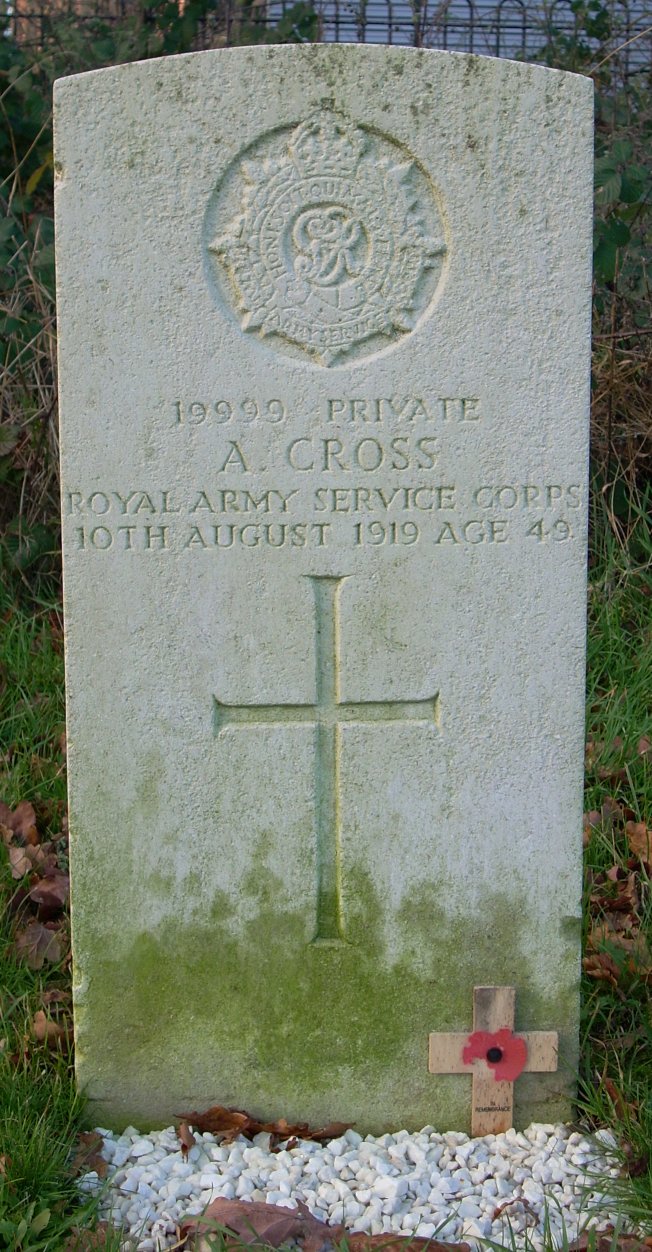 Arthur Cross is not named on the St Matthew's memorial, but he lived at 26 Buckingham Street, so he should have been. It's possible that a transcription error at the time that the memorial was being designed led to his name being omitted and that of PC Ash (who didn't die in the War) being included instead.

Arthur Cross was born in Ledwell near Chipping Norton in 1870/71 to James and Sarah Cross. His father, who was 22 years older than his mother, died in the spring of 1872 aged 63, when Arthur was still an infant. He had a sister, Florence, who was 7 years older than him, and a brother, Charles, who was 11 years older. In 1881 the family was living in Duns Tew, near Banbury, and Charles was described as a shepherd, whilst their widowed mother (then aged 45) was an agricultural labourer. Arthur (aged 10) was still at school but Florence had left home, probably to go into service.

Ten years later Arthur and his mother were living in Steeple Aston; he was an agricultural labourer and she was described as a 'pauper'. Sarah's 4-year old grandson, Wilfred, was also in the house.

In the spring of 1892 Arthur married Mary Goodgame (who had been born in Hampton Poyle in 1866/67) in Woodstock. The couple moved to 1 Littlemore Court, off St Aldates in Oxford. Here they had 6 children, the first of whom was born in 1892/93 and named Florence after Arthur's sister. Harry was born in 1896/97, Arthur in 1899/00, Frank in 1901/02 and Maud in 1903/04. Another child, probably born between Florence and Harry, died in infancy. By 1911 Arthur was working as a brewer's carter and his oldest son Harry was an errand boy for a poulterer.

Arthur was 44 when War was declared, and hence not under pressure to join up, or liable to be conscripted. However, he joined the army voluntarily as a Private in the (Royal) Army Service Corps, service no. 19999, later transferring to the 721 Company of the Labour Corps, service no. 301728. He was posted to France in November 1915.

It's likely that Arthur returned to England in 1917 or 1918 as he is recorded as living at 26 Buckingham Street in Kelly's street directory, and the electoral register, for 1918. He died in Oxford on 10 August 1919 of carcinoma of the oesophagus, which was perhaps a side-effect of having been gassed. His death certificate describes him as an army pensioner, which suggests that he had some kind of ongoing health issue resulting from his war service. He is buried in Osney Cemetery.

Arthur and Mary's eldest son Harry, who was 17 or 18 when War broke out, also went to fight; he was in the 10th (Prince of Wales's Own) Royal Hussars, a cavalry regiment (service no. 29945). He was recorded as an absent voter in the 1918 electoral register for 26 Buckingham Street. As far as we know he survived the War.

However, Mary lost not only her husband Arthur but also her brother Joseph Eli Goodgame who lived nearby at 11 English Row, off St Aldates. He died in October 1919, aged 50, and is buried near his brother-in-law in Osney Cemetery.

Arthur and Mary's oldest daughter Florence married Harry Salter, a bricklayer, in March 1921 at St Matthew's church. Their daughter Maud married Edmund (Eddie) Belcher, who was related by marriage to Arthur Belcher (Eddie's younger sister Doris was married to Arthur's youngest brother Aubrey). Eddie was in the Territorial Army and was evacuated from the Dunkirk beaches in 1940 having been blown out of his boat and pulled from the sea. Maud is remembered by her nephew David Belcher as a 'warm-hearted and friendly aunt'. She died in 1964 and Eddie in 1971.

Mary Cross did not re-marry; she died in December 1929 at 60 Great Clarendon Street in Jericho, aged 63. Her funeral was at St Matthew's church and she is buried in Osney Cemetery near her husband and brother.