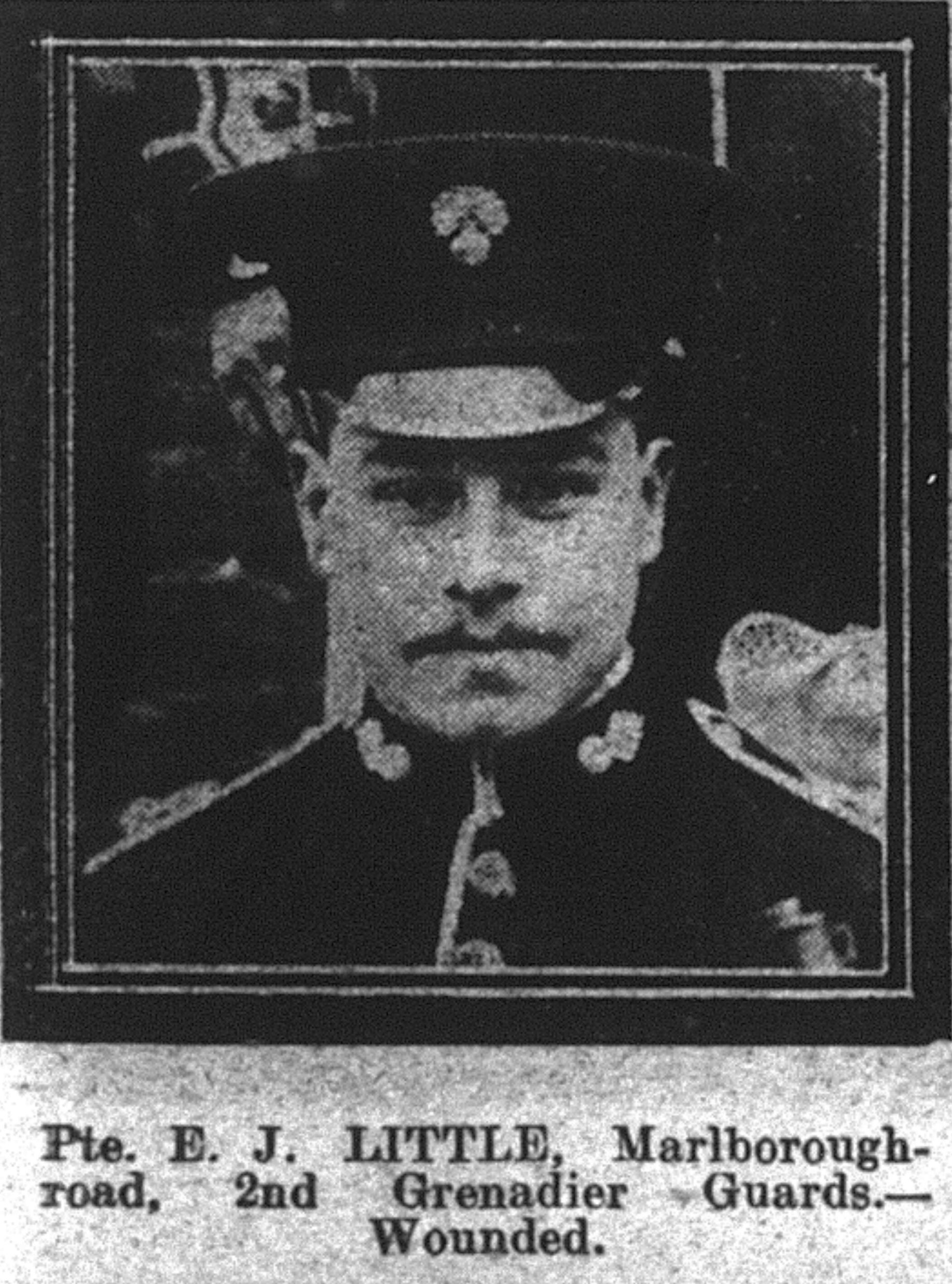 When Ernest was born in 1886 the family was living at 1 Cromwell Place, Bridewell Square, St Aldates, but in the late 1890s they were living at nearby 7 Thompson's Yard and by 1901 they had moved to 10 Clarke's Row. They were still at 10 Clarke's Row when Cecil was born in 1903 and when Gertrude, the oldest of the siblings, had a daughter, Dorris Minnie Little, in December 1905. But by 1911 the family had moved from St Aldates to 198 Marlborough Road in Grandpont.

Ernest attended the St Aldates Boys' Elementary School. On leaving school he worked as an errand boy for Boots the Chemist on Queen Street and later as a shoemaker's assistant. He enlisted in Abingdon in October 1908, when he was 22, and joined the Grenadier Guards at Caterham. According to his military records he was 5' 9" tall, weighed 13st had a chest circumference of 41", a fresh complexion, brown eyes and brown hair. By 1911 he was a Private in the 2nd Battalion of the Grenadier Guards, service no. 13992, and was living in St George's Barracks in Hanover Square, London.

When War was declared, Ernest was called up from the Army Reserve and was sent to France the following November. His battalion was engaged in various actions on the Western Front. Ernest was severely wounded in the thigh on 7 October 1915 at the Battle of Loos, which took place between 25 September and 18 October, and which was the largest British offensive mounted that year.

Ernest returned to England on 15 October 1915, and was treated at hospitals in Woolwich and Beckenham for five months. On 11 March 1916 he was travelling home to Oxford, and stopped at Didcot to change trains. Whilst waiting for the 8:10pm to Oxford he fell onto the track and was killed by a train. It was eight days before his 30th birthday, he had not been back to Oxford since War broke out, and his family had been expecting him home that day.

Ernest was buried with military honours in Botley Cemetery in West Oxford; his coffin was conveyed there on a gun carriage accompanied by men of the Royal Garrison Artillery. Botley is one of several cemeteries established in Oxford in the mid 19th century (following the Burial Acts). During the First World War it was used as a burial place for soldiers who died in Oxford, usually at hospitals that made up the wartime Third Southern General Hospital. This occupied the Examination Schools on the High Street (mainly for the walking wounded), the Town Hall (particularly for malaria patients), the Cowley Road Workhouse, part of the Littlemore Pauper Lunatic Asylum (for victims of shell shock) and several colleges. There are 742 war burials at Botley, 156 of them Commonwealth War Graves from the First World War. At the request of his mother, Ernest's headstone is inscribed 'Nearer my God to Thee'.

With thanks to members of the Little family for additional information.