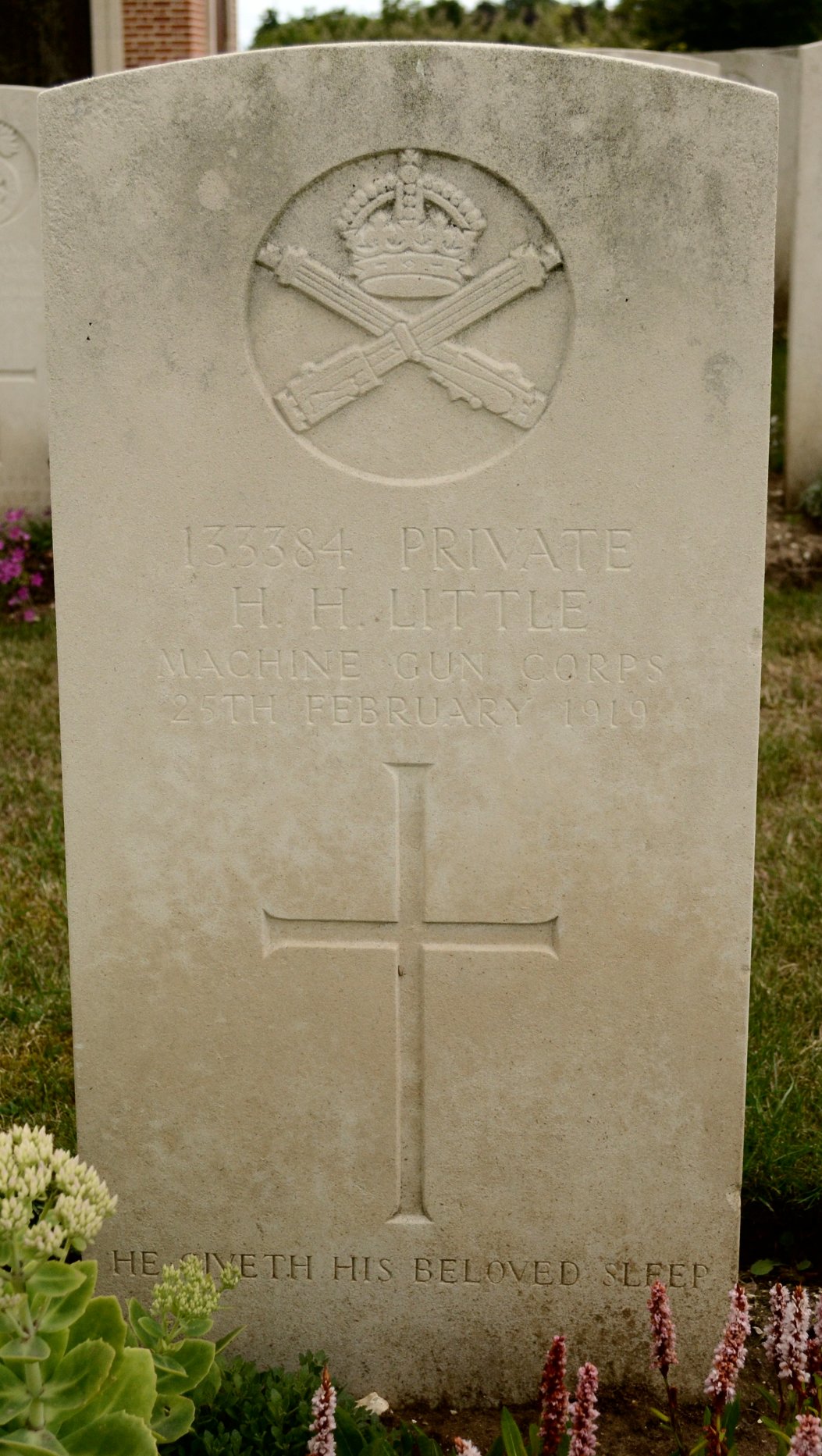 When Ernest was born in 1886 the family was living at 1 Cromwell Place, Bridewell Square, St Aldates, but in the late 1890s they were living at nearby 7 Thompson's Yard and by 1901 they had moved to 10 Clarke's Row. They were still at 10 Clarke's Row when Cecil was born in 1903 and when Gertrude, the oldest of the siblings, had a daughter, Dorris Minnie Little, in December 1905. By 1911 the family had moved from St Aldates to 198 Marlborough Road in Grandpont.

Like his older brother Frederick, Hubert served with the Machine Gun Corps; he was a Private with the 61st Company Machine Gun Corps, service no. 133384. He died of disease on 25 February 1919, aged 19, in northern France. He was buried at the Abbeville Communal Cemetery Extension. For much of the First World War, Abbeville was the headquarters of the Commonwealth lines of communication and No. 3 British Red Cross Society No. 5 and No. 2 Stationary Hospitals were stationed there variously from October 1914 to January 1920. The communal cemetery was used for burials from November 1914 to September 1916, the earliest being made among the French military graves. The extension was begun in September 1916. At the request of his father, Hubert's gravestone is inscribed 'He Giveth His Beloved Sleep'.

Two other of the Little brothers - William Francis (born 1888) and Arthur Reginald (born 1892/93) also went to fight but survived. William was in the Oxf & Bucks Light Infantry [there is more information on him in the entry on Frederick Little]. Arthur worked as a grocer's porter before serving with the Wiltshire Regiment (service no. 14435) during the War. In 1920 he married Gertrude May Tuck, who was the sister of his brother William's wife, Hilda. Gertrude and Hilda had grown up at 35 Marlborough Road. Gertrude had been a maid at the Randolph Hotel. She had a baby, Violet May, later in 1920, but seemingly both mother and daughter died soon afterwards; Violet was baptised privately, at 198 Marlborough Road, the home of her grandparents. Arthur married again on New Year's Day 1925, when he was 31, to Ciceley Holloway, in St Matthew's church.

The youngest child of William and Mary Little, Cecil (born 1903/04), was only 10 or 11 when war broke out, and hence too young to go. Their eldest daughter, Gertrude, married a man called Arthur Pledge and had a son called Hubert (presumably named after his uncle); he later lived at 200 Marlborough Road. Gertrude died in 1953 and is buried in Botley Cemetery, where her brother Ernest is also buried.

With thanks to members of the Little family for additional information.