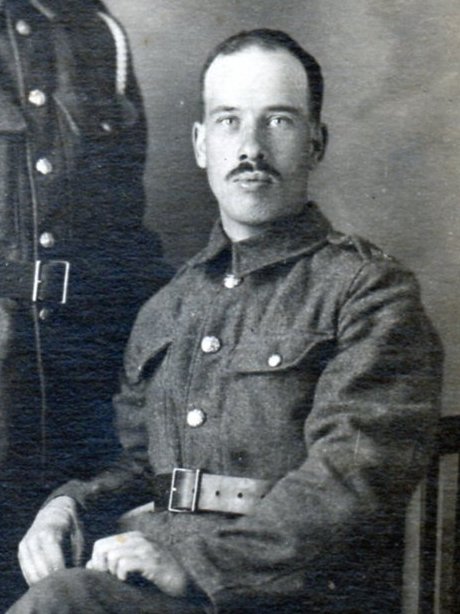 The information below is kindly supplied by Barry Burnham, whose full biography of Ernest Wright is here.

Ernest Wright was born in St Aldates on 21 February 1887, the first of the eight children of John and Mary Wright. His brother Arthur Wright was also killed in the War.

The children's father John had been born in 1855 in St Ebbe's, and was a general labourer. His wife Mary (née Bardrick) had been born in 1861/62 in Grendon Underwood in Buckinghamshire. As a young woman she moved to Oxford to find work as a domestic servant and it's likely that the couple met here.

In 1891 the Wright family were living at 13 Isis Street (off St Aldates, near Folly Bridge) but by 1901 they had moved to 49 Marlborough Road in Grandpont and John was working as a river dredger. Four of the children - Mabel, George, Edith and a child of unknown name - had died in infancy, and only Ernest (born 1887), Nelly (1894/95), Arthur (1896) and Margaret (1897/98) survived. There were lots of cousins nearby however: two of John's brothers lived locally - Mark and his family at 33 Chilswell Road, and Paul at 16 Chilswell Road and later at 151 Marlborough Road. In 1891 Ernest, now 14, was working as a porter in a bookshop. He later moved into the printing trade and worked as a compositor.

On Boxing Day 1910, when he was 23, Ernest married Ethel Maud Silvester at St Aldates church. Ethel was 24 and had been born and brought up in New Hinksey; her father William Silvester was a labourer at the St Ebbe's gasworks. In her teens she had been a boarder at the school run by the Convent of the Holy and Undivided Trinity on Woodstock Road (now the site of St Antony's College).

Within a few weeks of their marriage Ernest and Ethel moved to West Stratford in London where he continued to work as a printer-compositor. However, they had returned to Oxford by September 1912, and Ernest became a motor driver for the St John's Ambulance Brigade. In February 1915 their son Reginald John William was born, in St Mary's Road in East Oxford. In October that year Ernest enlisted with the army and joined the Army Services Corps (Motor Transport) as a Lance Corporal, service no. 131588.

Ernest spent less than a month at the ASC depot at Grove Park in London before sailing for Alexandria in Egypt as part of the Mediterranean Expeditionary Force. From there he was sent to the port of Basra in Mesopotamia (now Iraq), arriving on 10 January 1916. When Turkey had entered the War in support of Germany in early November 1914, it had become necessary to safeguard British interests in Mesopotamia and the Persian Gulf. Ernest served as a driver with his unit, the 596th Company of the ASC, in the area between Basra and Baghdad, for three years. He contracted small pox just as the War was finally ending. By 14 November 1918 he was being treated in a field hospital north-east of Baghdad, but eight days later he died, aged 31. He was buried in the Baghdad (North Gate) War Cemetery, Iraq.

Because they were born in St Aldates, and involved with the church there, Ernest and his brother Arthur are also named on the St Aldates war memorial. With their deaths, John and Mary Wright had lost six of their eight children at a young age; only Nelly and Margaret survived. Margaret worked as a bus conductor - a 'clippie' - during the War. In 1919 she was married in St Matthew's church.

Ernest and Arthur's uncle, Mark Wright, lived at 33 Chilswell Road. He and his wife Edith had 12 children, six girls and six boys, four of whom - John, William, Vernon and Martin - also fought in the War but all of whom survived.

Margaret Wright in her bus conductor's uniform during the First World War. Image courtesy of Clive Browning. (Click on image to close) 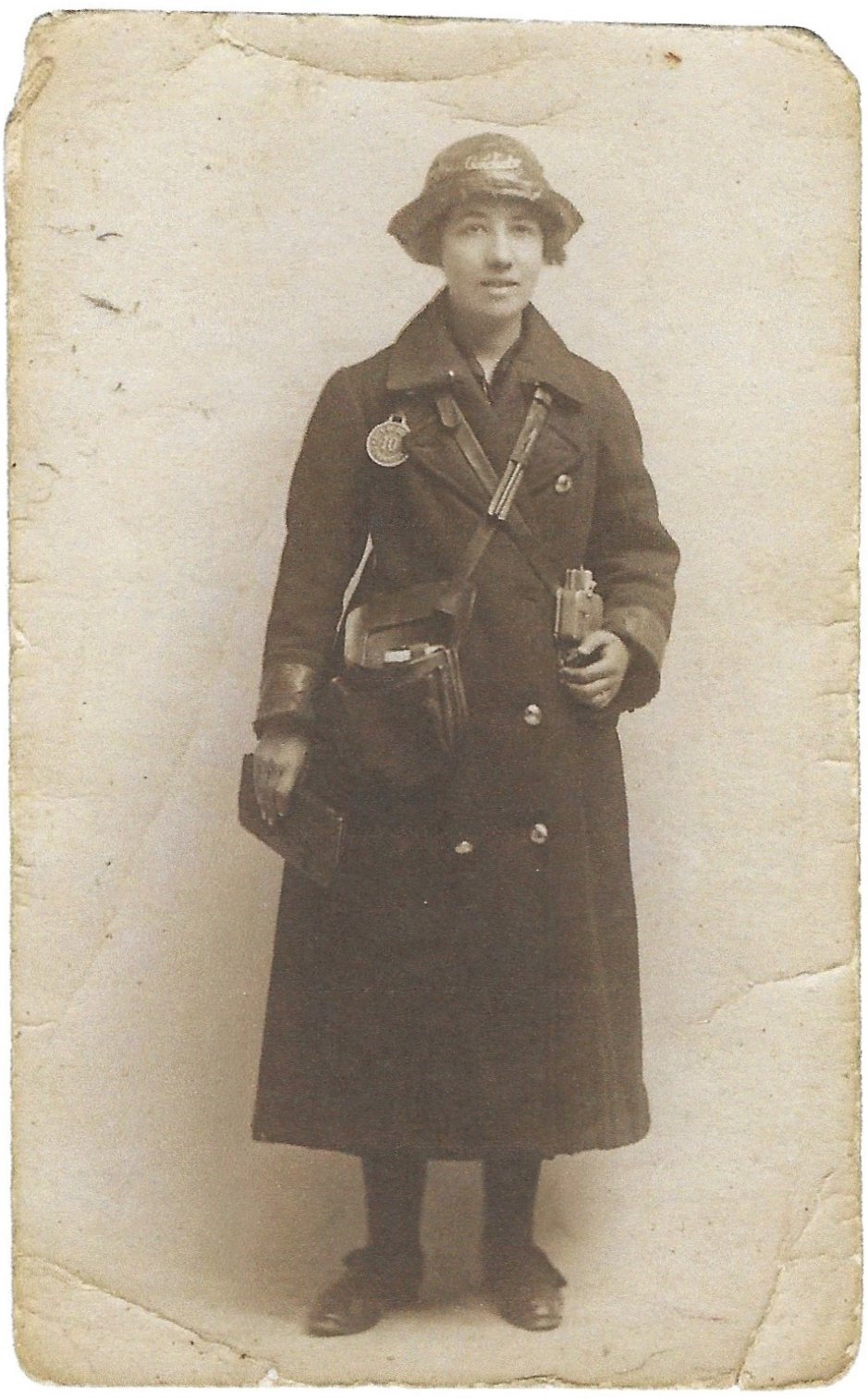 Arthur's sister Margaret (far left) and his father John (right) on Margaret's wedding day in 1919. The photograph was probably taken in the back garden of 49 Marlborough Road. Image courtesy of Clive Browning. (Click on image to close) 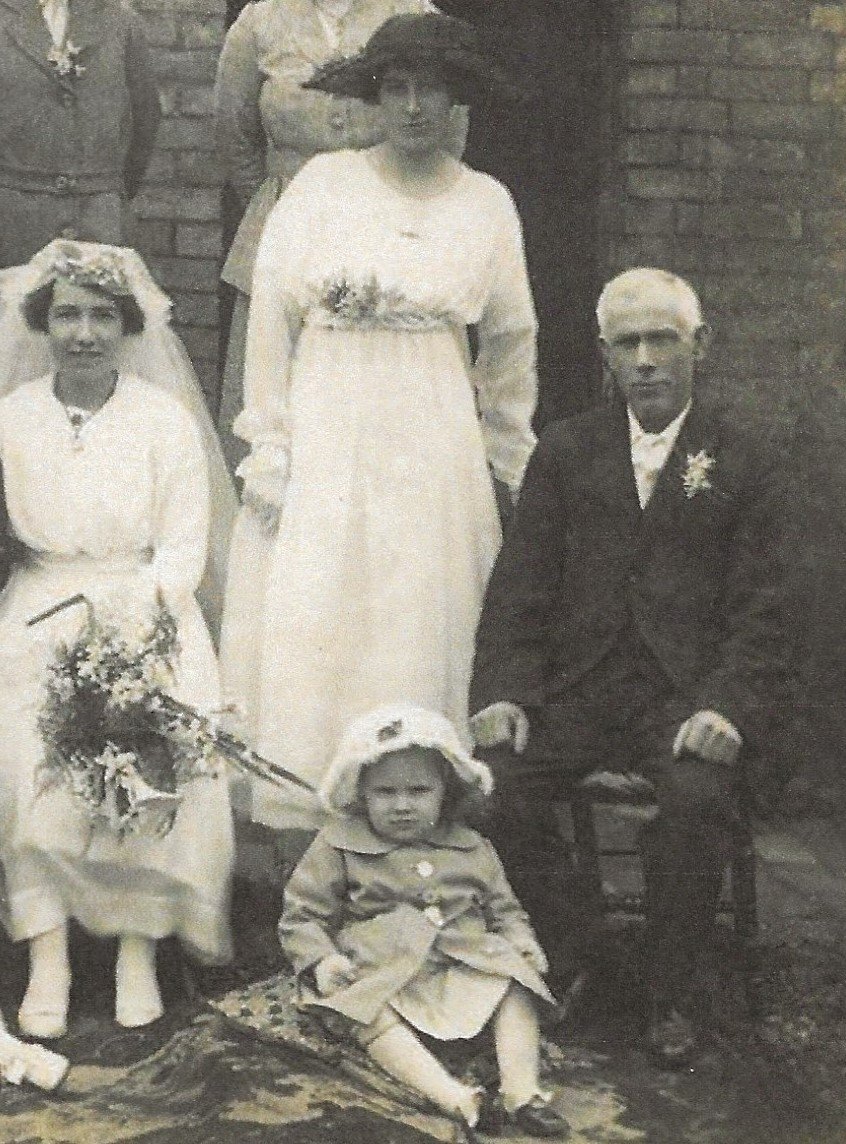