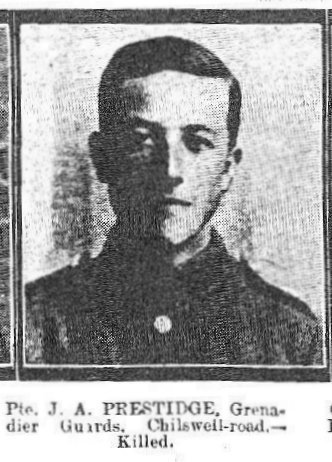 James Prestidge was born in early 1885 in North Hagbourne (then a village in Berkshire but now a suburb of Didcot, Oxfordshire). He was the first of the ten children of James Prestidge and his wife Henrietta (née Wyatt). James senior had been born in Abingdon in 1864/65 and was a coachman and groom. Henrietta had been born in London in 1860/61; the couple married in 1884. Soon after James junior's birth they moved to Didcot where eight more children were born: Albert (born 1887); Henrietta (known as Nellie, born 1889, who later worked at Frank Cooper's marmalade factory as an orange cutter); William Arthur (born 1890 but died as an infant); Henry John (born 1892, later a baker); Lilian Rose (born 1893); Florence (born 1895, who later worked as a domestic servant); and twins Marjorie and Sidney (born 1897; Sidney later worked as a messenger for the University Exam Schools in Oxford). By 1901 the family had moved to Oxford and was living at 118 Marlborough Road in Grandpont. A final child, Doris May, was born in December 1903.

In April 1912, when he was 27, James married Beatrice Annie Miller, who came from Jericho and who was three or four years younger than him. The couple moved to 65A Holywell Street, on the corner of Longwall Street in the centre of Oxford; their landlord was William Morris (later Lord Nuffield) who had a garage there, and who they knew as 'Bill'. James was working as a milkman (or milk carrier).

James and Annie had a son, Maurice, in the summer of 1913, and in 1914 or 1915 they moved back to Grandpont to live at 46 Chilswell Road (next door to the family of Arthur Belcher). Here they had two more children: Una May, born in April 1915, and baptised at St Matthew's chuch, who died aged 6 or 7 from pneumonia; and Leonard James, born in October 1916 and baptised at St Matthew's in April 1917.

By the time of Leonard's baptism James had already enlisted and was a Private in the 3rd Battalion of the Grenadier Guards, service no. 28603. He was sent to northern France and died on 27 November 1917, aged 32, at the Battle of Cambrai. This had begun on 20 November with an initially very successful attack involving massed artillery and tanks, aircraft and infantry operating together in an ‘all arms’ assault. The Guards’ Division, of which James was a member, advanced towards the village of Gouzeaucourt in an attempt to capture it. Though the Germans eventually recaptured much of the ground taken, Cambrai provided a blueprint for the ways in which the War would eventually be won. Bertram Coppock had been killed in the same battle six days earlier.

James's and Bertram's bodies were never recovered but they are both named on the Cambrai Memorial in Louverval, which commemorates more than 7,000 servicemen of the United Kingdom and South Africa who died in the Battle of Cambrai in November and December 1917 and whose graves are not known.

After James's death his widow Beatrice remained at 46 Chilswell Road with her three young children. In January 1921, when she was 31, she married Harry Cooke, a house painter from Jericho. They had a further six children (one of whom, Don, is still alive).

James's son Maurice became a postman (he was a strong Trades Union man) and later landlord of the Marlborough Arms pub on St Thomas's High Street. His brother Len worked for their stepfather Harry Cooke as a decorator, and later inherited the business from him.

James is also named on the St Peter le Bailey war memorial because his parents James and Henrietta lived at Castle Terrace off Paradise Street after the War; when their daughter Doris got married in 1925, banns were read in St Peter le Bailey church and she was described as 'of this parish'. This church, on New Inn Hall Street, is now the chapel of St Peter's College. Percy Collinson is also named on this memorial.

James's father James senior also fought in the War; he enlisted in May 1915, when he was 50, though he lied about his age and said he was only 45. Having been a groom, he became a Private in the Remounts Service of the Army Service Corps (service no. 110940), the unit responsible for the provisioning of horses and mules to all other army units. He was 5' 6" tall and had a chest circumference of 39½". After the armistice he re-enlisted to serve in the Army of Occupation. He was discharged in January 1920 due to rheumatism.

With thanks to Jane Carrington (granddaughter of Beatrice Cooke, formerly Prestidge) for additional information.

Una, daughter of James and Beatrice Prestidge, and her classmates at St Matthew's Infant School (on the corner of Whitehouse and Marlborough Roads), 1922-23. Image from Carole Newbigging, The Changing Faces of South Oxford and New Hinksey, Book 2 (Click image to close) 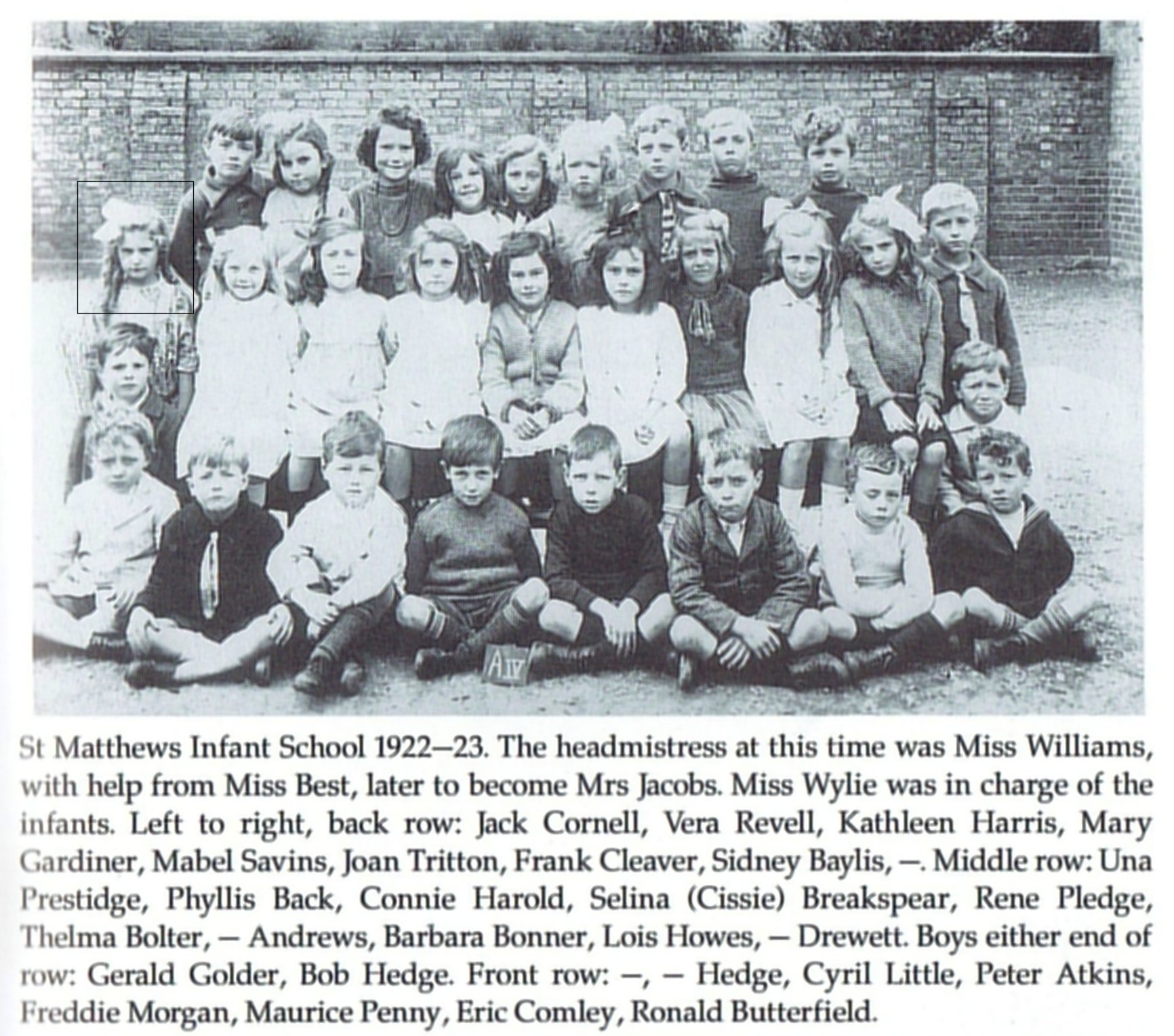