Halts were miniature railway stations, with a single platform and a small passenger shelter (called a pagoda, because of its sweeping roof) on either side of the tracks. Halts south of Oxford were built when steam railmotors were introduced in 1908 to provide local railway services between the suburbs and the main railway stations in the centre of town, and between Oxford and several outlying villages. 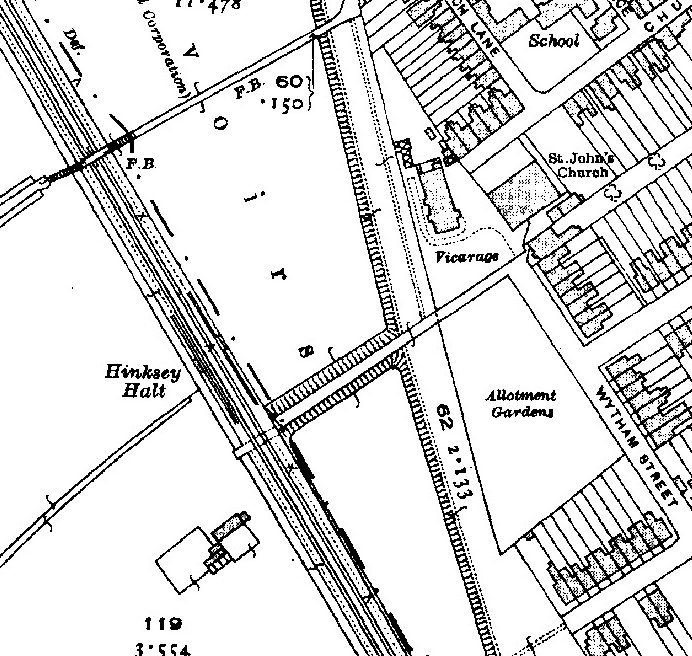 Hinksey Halt was on the Great Western Railway (GWR) line between Oxford and Princes Risborough. It can be seen in the background of this photo which shows storm damage near the railway line north of Kennington in around 1910. The Halt was approached on foot via a path running south-west from the northern end of Wytham Street, crossing the southern tip of Hinksey Lake on a raised causeway. The halt, and the path leading to it, can be seen on this extract from the 1921 Ordnance Survey map; the path still exists. Iron gateposts and railings along either side of this path, and along the eastern side of the footpath leading north from here (past the vicarage), are almost certainly remnants of the original railway. There are further matching railings in the grounds of the nearby South Oxford Bowls Club.

In order to reach the down platform (for trains going north, away from London) on the western side of the halt, it was necessary to walk across the tracks on a level crossing. On 4th March 1914 Thomas Heath, who was landlord of the Old Berkshire House pub on the Abingdon Road, was killed at the crossing. He was 59. His widow Lucy was paid £5 by the Great Western Railway company as 'a gratuity towards funeral expenses'. 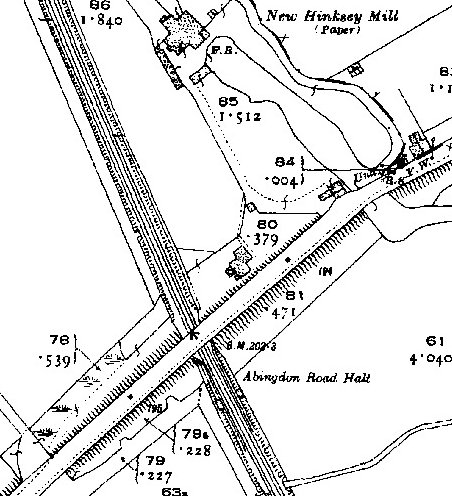 There was another halt further out along the line, near the southern end of the Abingdon Road, just south of Red Bridge, called the Abingdon Road Halt. It can be seen in this photograph, and on this extract from the 1921 Ordnance Survey map (although by the time this map was drawn, both Hinksey and Abingdon Road Halts had closed - see below). 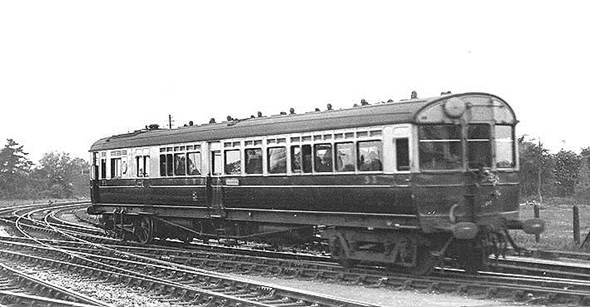 Railmotors had the engine and the carriages all in one vehicle. They each weighed 45 tons, were 74ft long, and comprised an engine room at one end, then a luggage van, a smokers' compartment for 22 people, an entrance vestibule, the main compartment for 36 people, and lastly the driver’s cabin, from where he controlled the driving and heating gear. They were as fast as ordinary passenger trains. A recently-restored steam railmotor can be seen at Didcot Railway Centre.

There were several other railmotor halts within or just outside the city boundaries. Oxford Road Halt, two miles north of Oxford on the road to Banbury, was opened in 1850 when the Buckinghamshire Railway reached there, and served as a temporary station for Oxford until the line was completed. When the London and North Western Railway (LNWR) began a steam railmotor service between Oxford and Bicester in 1905 the halt was reopened to serve Cutteslow and Jordan Hill. Wolvercote Halt opened in 1905 and Summertown Halt, approached by Aristotle Lane, opened a year later; it was renamed Port Meadow Halt in 1907.

Iffley Halt and Garsington Road Halt were on the Great Western Railway's line to Princes Risborough and High Wycombe. Iffley Halt, built in 1908, was originally going to be called Oxford Sewage Bridge Halt, but someone thought better of it. It was on the west side of the river, next to the viaduct, on the south side of the tracks, and hence was rather inconvenient: villagers had to walk half a mile along the towpath and across the lock to reach it. The development of the Morris Motor and Pressed Steel works at Cowley resulted in the Garsington Road Halt being renamed Morris-Cowley station in 1928.

The halts at Hinksey, Abingdon Road and Iffley were short-lived: they closed on 22 March 1915, partly due to the First World War, and partly due to competition from newly-arrived motor buses on the streets of Oxford, introduced by an enterprising young businessman called William Morris (later Lord Nuffield).

Storm damage north of Kennington and west of the Great Western railway line, looking north, c. 1910. The metal footbridge taking the path known as the Devil's Backbone over the railway line can be seen in the background, near the centre of the picture. At the right-hand end of it (but closer to the camera) are one of the raised platforms, and one of the 'pagoda' passenger shelters of Hinksey Halt. The other shelter, on the other side of the tracks, is just visible opposite it, to the left. Image courtesy of Laurence Waters. (Click on image to close) 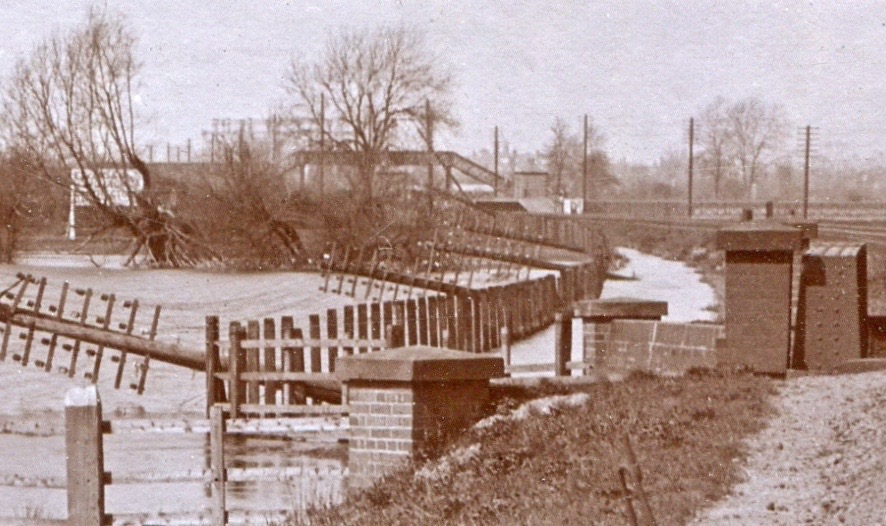 Abingdon Road Halt, c. 1915, showing the 'pagoda' passenger shelter on the up (London-bound) platform, and Red Bridge (taking the Abingdon Road over the railway) in the background. Image courtesy of Laurence Waters. (Click on image to close) 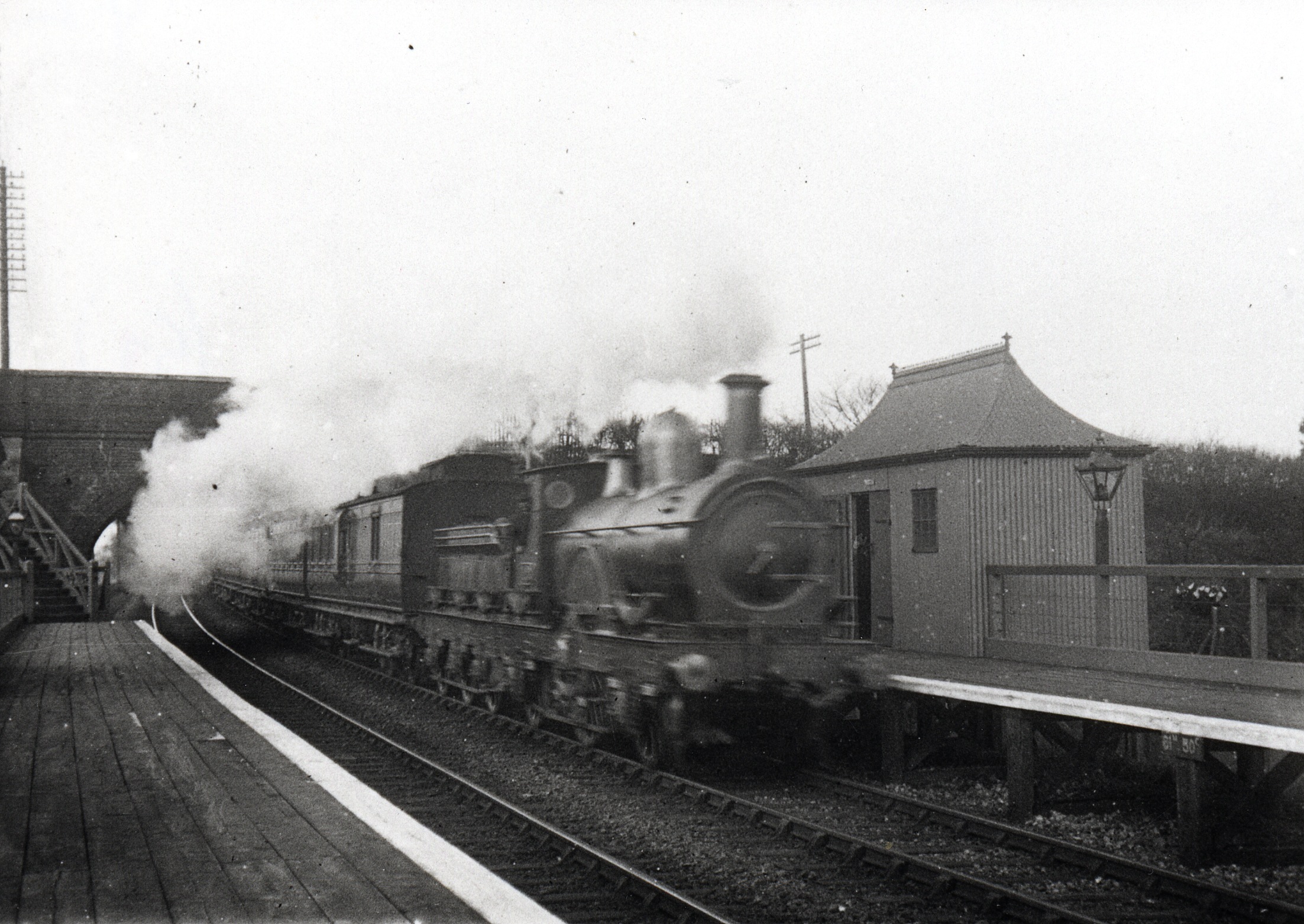