John Towle and his paper house

The Great Western Railway (GWR) built the first line to Oxford (from Didcot) in 1844. Where the railway line crossed the Abingdon Road, north of Kennington, there was to be a bridge taking the road over the railway. However, the building of this bridge was delayed by man called called John Towle, Oxford’s first Non-conformist alderman and second dissenting mayor, who owned the nearby Hinksey paper mill (as well as Weirs paper mill, to the north-east, near what is now Weirs Lane). 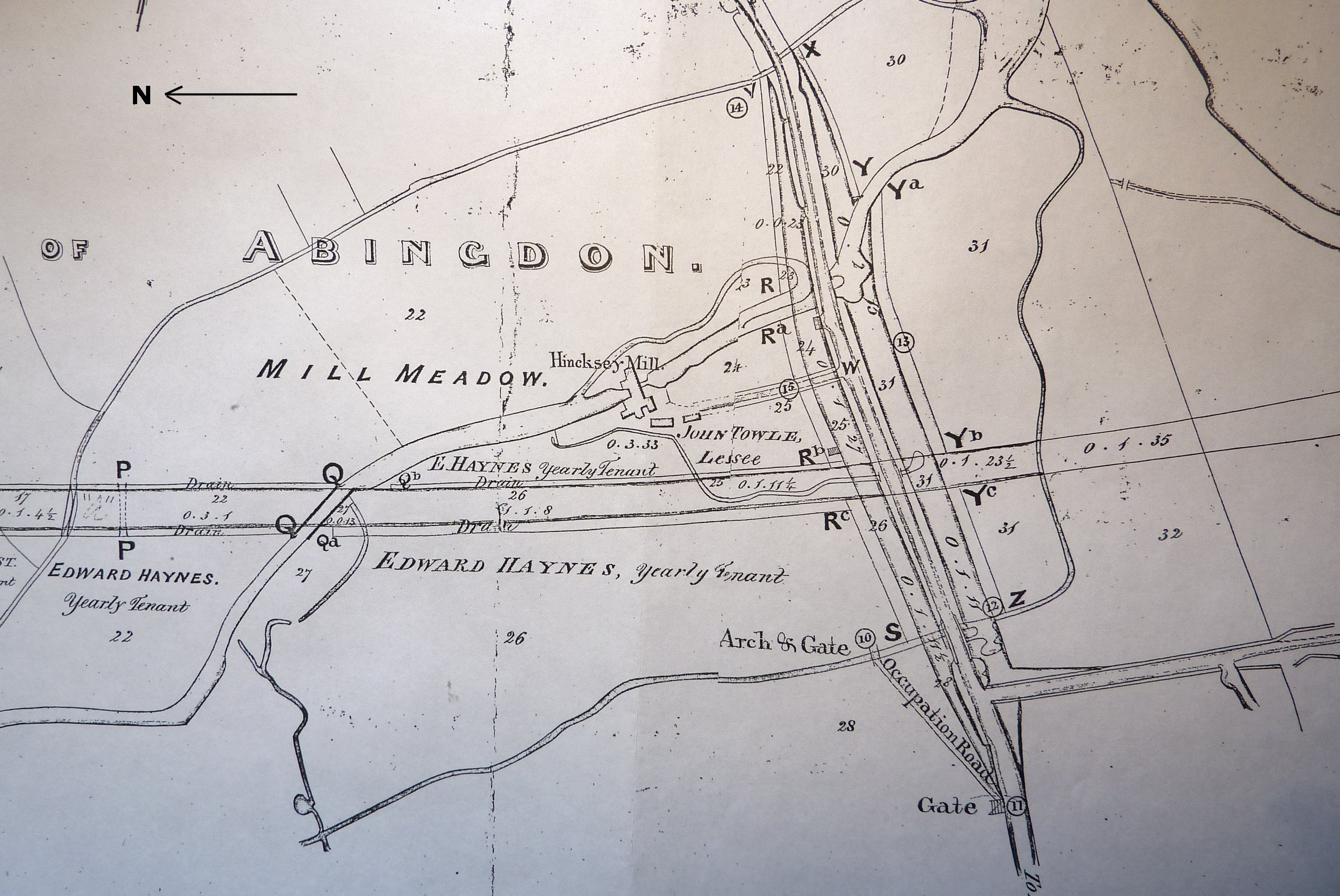 The Abingdon Road (running top to bottom of the picture) crossing the proposed new railway line (running right to left). The Hin(c)ksey Paper Mill run by John Towle is at the centre of the picture. East is at the top. Map accompanying Daniel Trinder's award, 1844. Reproduced by courtesy of Oxfordshire County Council. 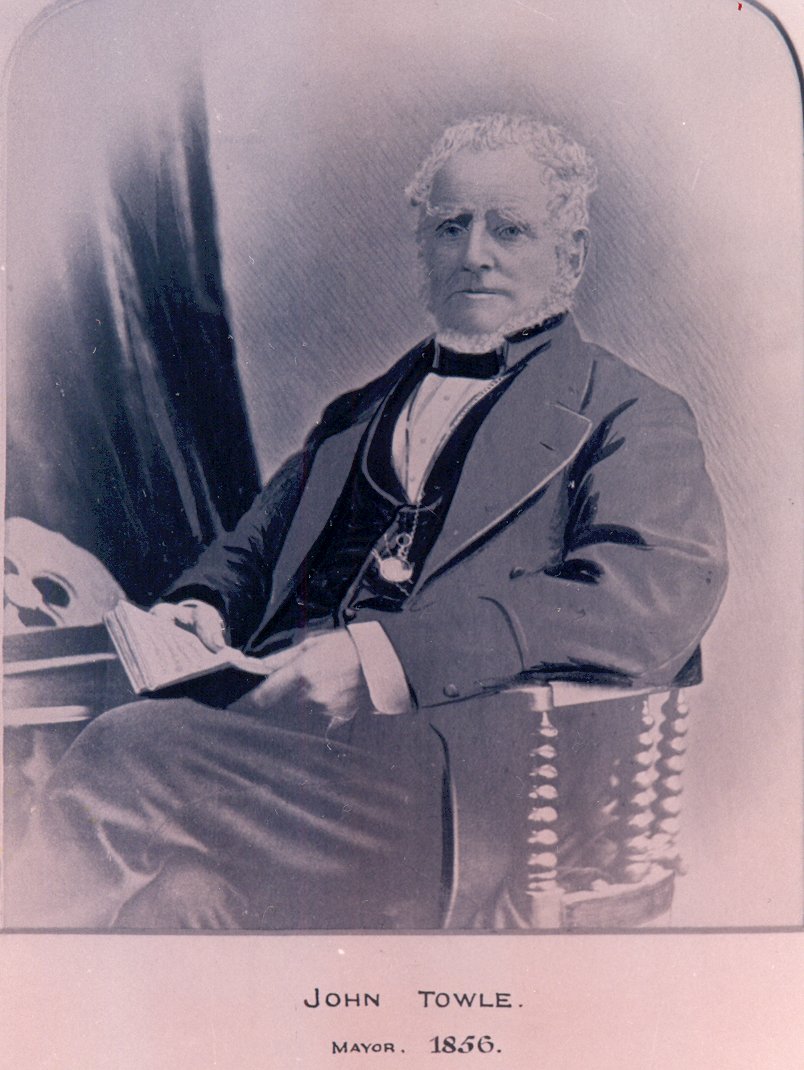 John Towle was something of an eccentric, and was always ready to challenge authority and custom. When he was elected Mayor in 1856 he caused a scandal by refusing to take the traditional oath of loyalty to the Vice-Chancellor of the University. He was a litigious character: he made appearances before the bench of magistrates as well as on it, and had a long-running dispute with the Corporation whilst he was one of its members, acting simultaneously as both plaintiff and defendant.

Towle was a Whig and on hearing that the 'Tory' GWR was coming to Oxford he erected a paper house on the line of the proposed railway embankment, perhaps to get compensation or perhaps just to make life difficult for the railway company. When the railway inspector, Major General Pasley, found that one arch of the bridge carrying the Abingdon Road over the railway was insecure, he noted in his report:

'Mr [Isambard Kingdom] Brunel explained to me that the haste with which this arch of the bridge was built was caused by the conduct of an individual in possession of part of the ground over which the embankment was carried, who after the site of the bridge had been decided on, erected what he called a ‘house’, which I saw but should never have guessed the use of, being a small hut of timber framework covered with brown paper, with a fireplace in it, for the purpose of claiming compensation from the Railway Company for having diminished the value of his property; and the work was delayed as the unexpected claim could not be settled until near the period of the entire completion of all other parts of the railway.' 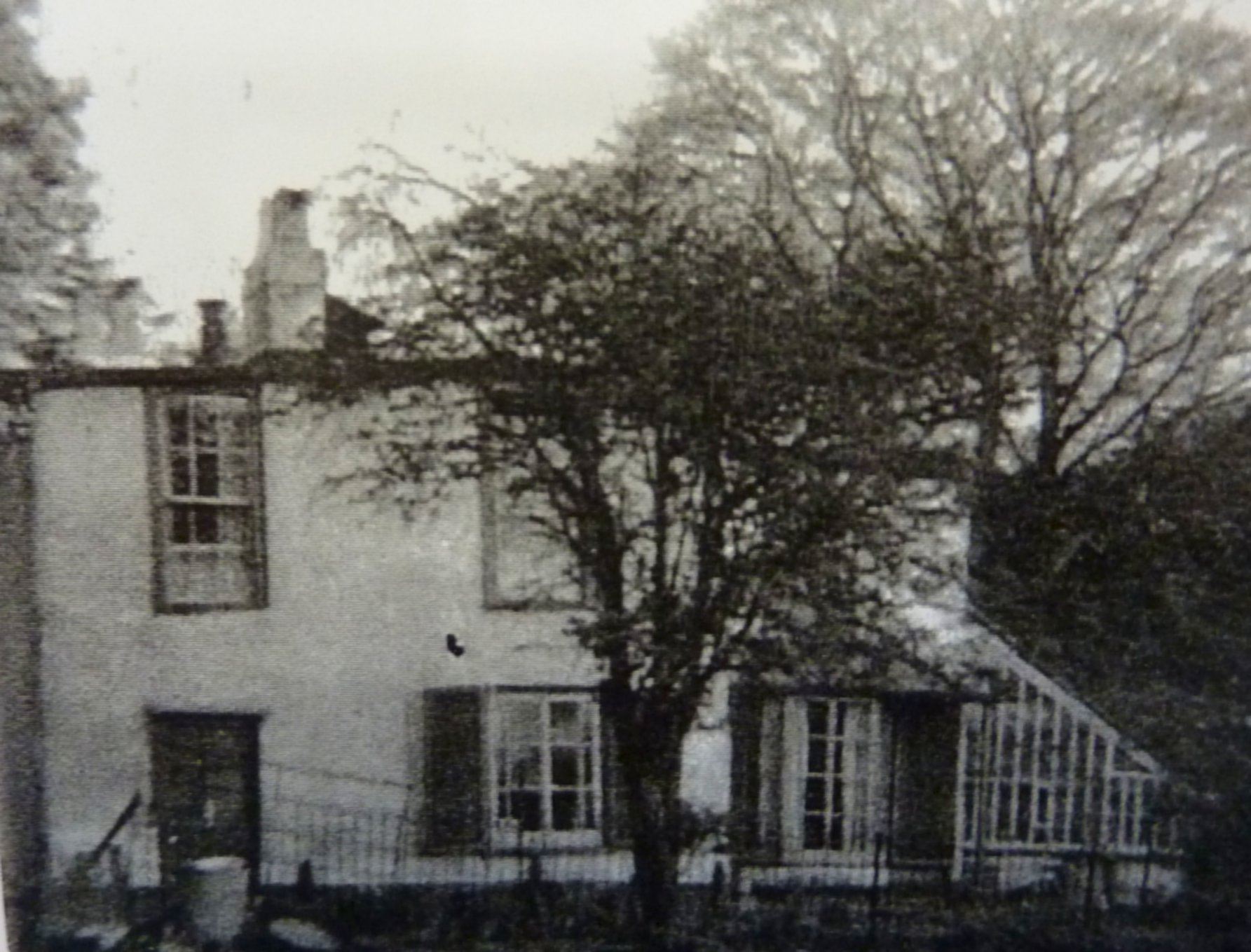 This house was an extraordinary building. It was tucked into the embankment, between where Go Outdoors and Milk & More are now (almost opposite the entrance to the Redbridge Recycling Centre), so that only the chimneys could be seen at road level.

Houses with tarred paper roofs were not as rare as you might think: paper-built structures seem to have had a brief period of popularity from c. 1775 to 1840 and the greatest concentration of identified buildings with paper-covered roofs occurs in Oxfordshire, a county known for paper-making (because of the demands of the printing industry). There were houses with paper roofs on Weirs Lane for example. 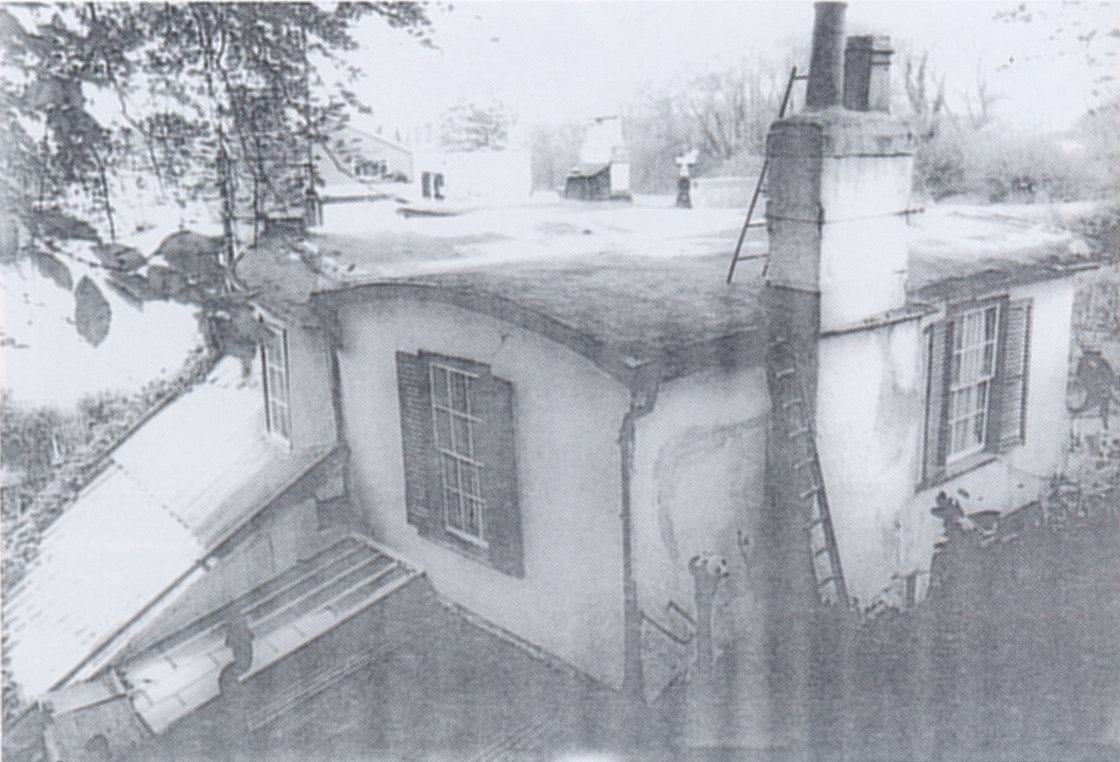 What made Paisley House unusual was that it had paper walls as well as a paper roof. When Towle built it in 1844 it was only two-roomed, but a survey by the Oxford Archaeological Unit in 1996 revealed that he had extended it in at least eight separate phases between 1844 and 1875. It grew from a small hut-like dwelling into a substantial five-bedroom villa with a veranda and conservatory, incorporating two types of paper roof and five types of paper and card cladding.

Despite its unconventional construction John Towle lived comfortably in the house until his death in 1885. It was subsequently purchased by the Turner family; Mr Turner, who ran the adjacent dairy, died in the late 1960s but his wife remained at Paisley House until she was 92. The house was later occupied by Kate Viner and her son Len, a painter and decorator, but Len died in 1988 (Kate having predeceased him) and the house was left empty. It fell into disrepair and eventually a tree fell on it, necessitating its demolition in 1996. It was listed Grade II.

In fact Towle’s extraordinary house did not delay the opening of the railway. Major General Pasley directed that the former course of the Abingdon Road, crossing the railway at a level crossing, should be kept until the bridge (later known as Red Bridge) and its approaches had been built properly, and the railway opened on time, in June 1844.  Whether John Towle received compensation or not is unclear: if he did, perhaps it was in gratitude that he named his house Pasley or Paisley House after the inspector. Or perhaps it was a jibe.

See what may be a picture of the level crossing taking the railway over the Abingdon Road on the website of the Old Ticket Office at Culham Station. 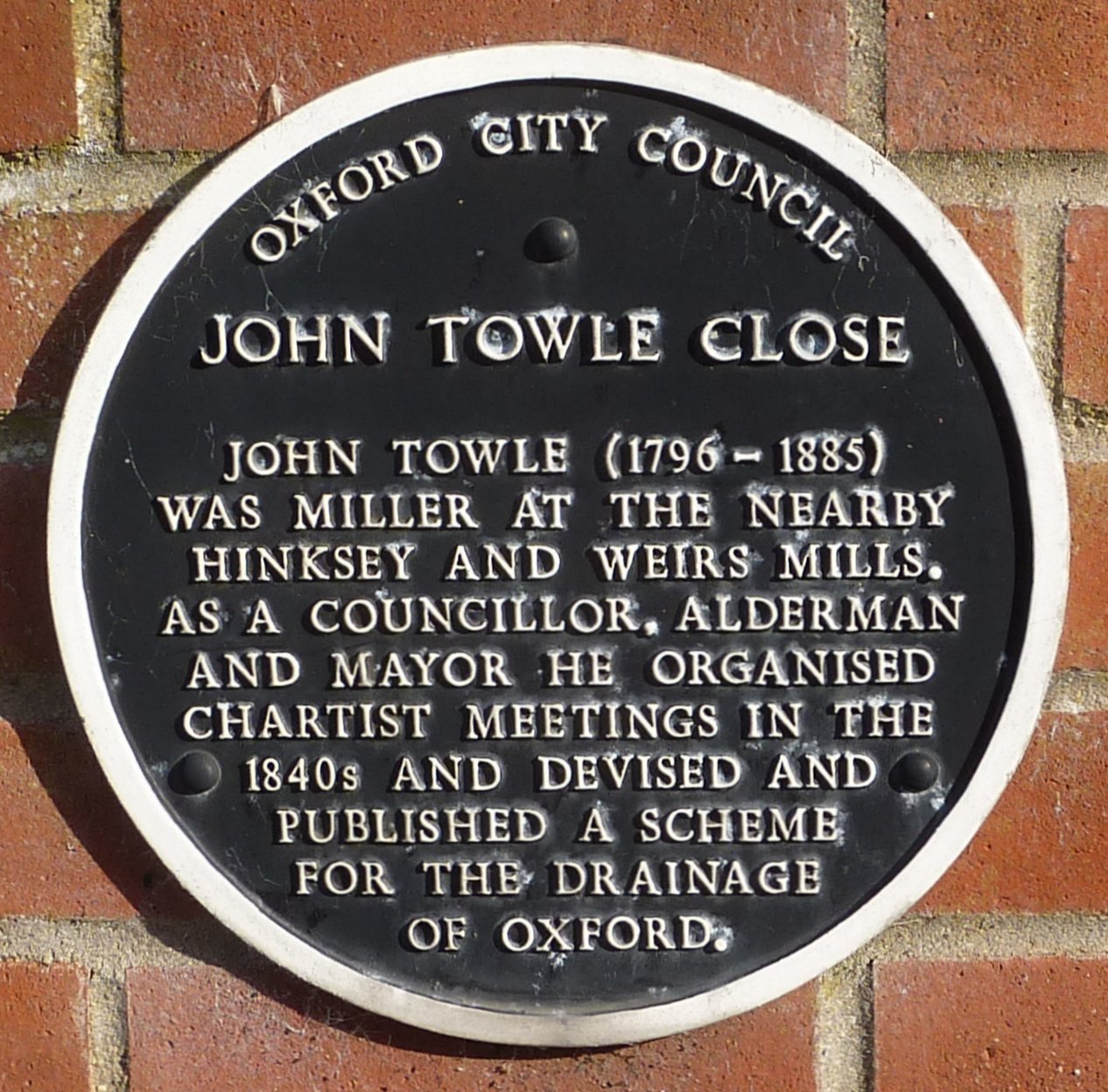 Read more about John Towle in:

And read more about his house and about other paper buildings in:

In his younger days Len Viner was apparently well-known for drinking at the Farrier's Arms on the Abingdon Road and for always turning up five minutes before opening time, at 5.55pm. His gravestone in the churchyard of St Laurence's in South Hinksey (below) has a clock face at the top, showing this time. (Click image to close) 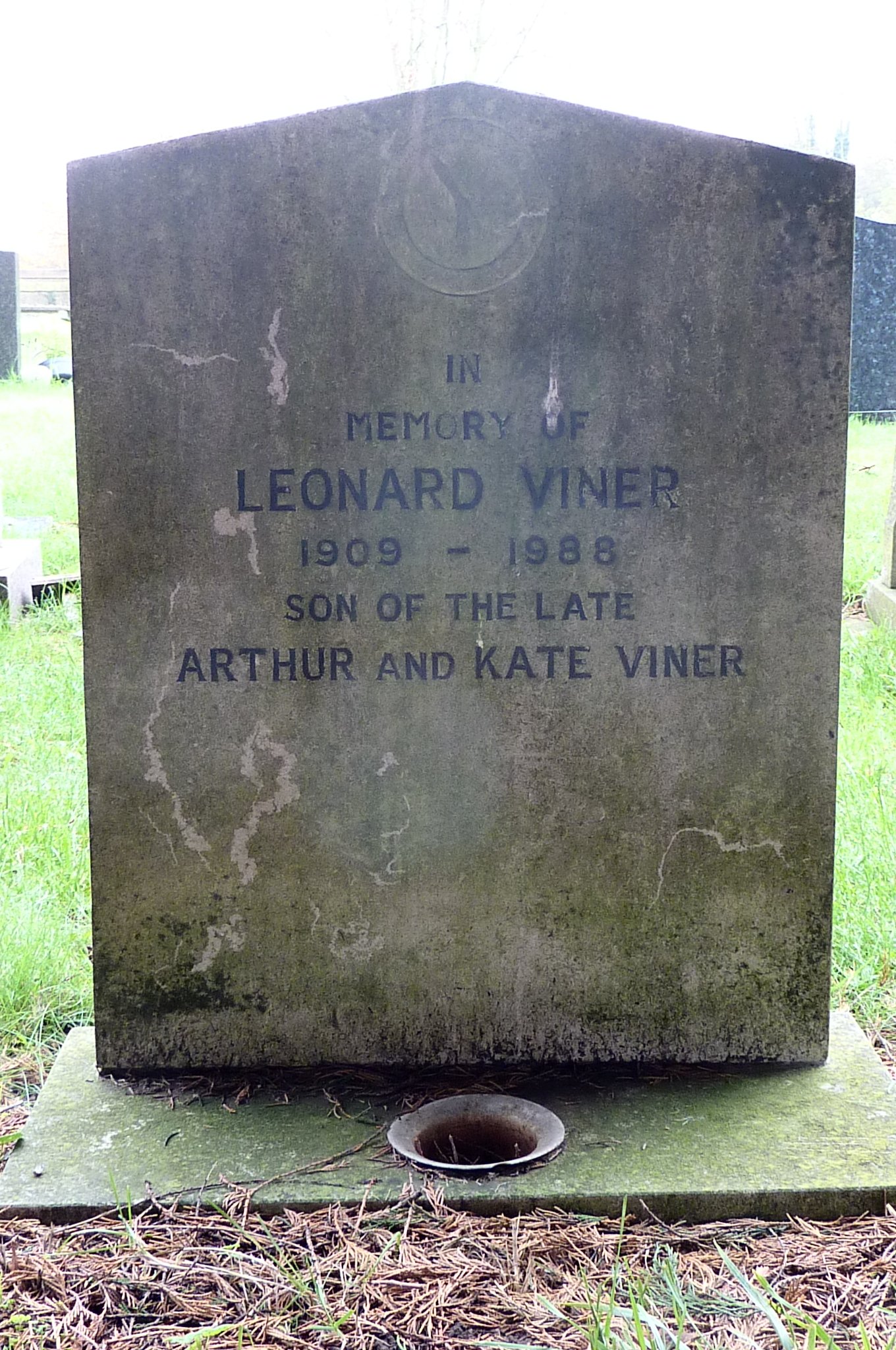 The Weirs paper mill: (left) at the top right-hand corner of the 1900 Ordnance Survey map and (right) depicted in a painting of unknown date. Painting copyright John Burbank, and reproduced with his permission. There is another painting of the mill here. (Click on either image to close) 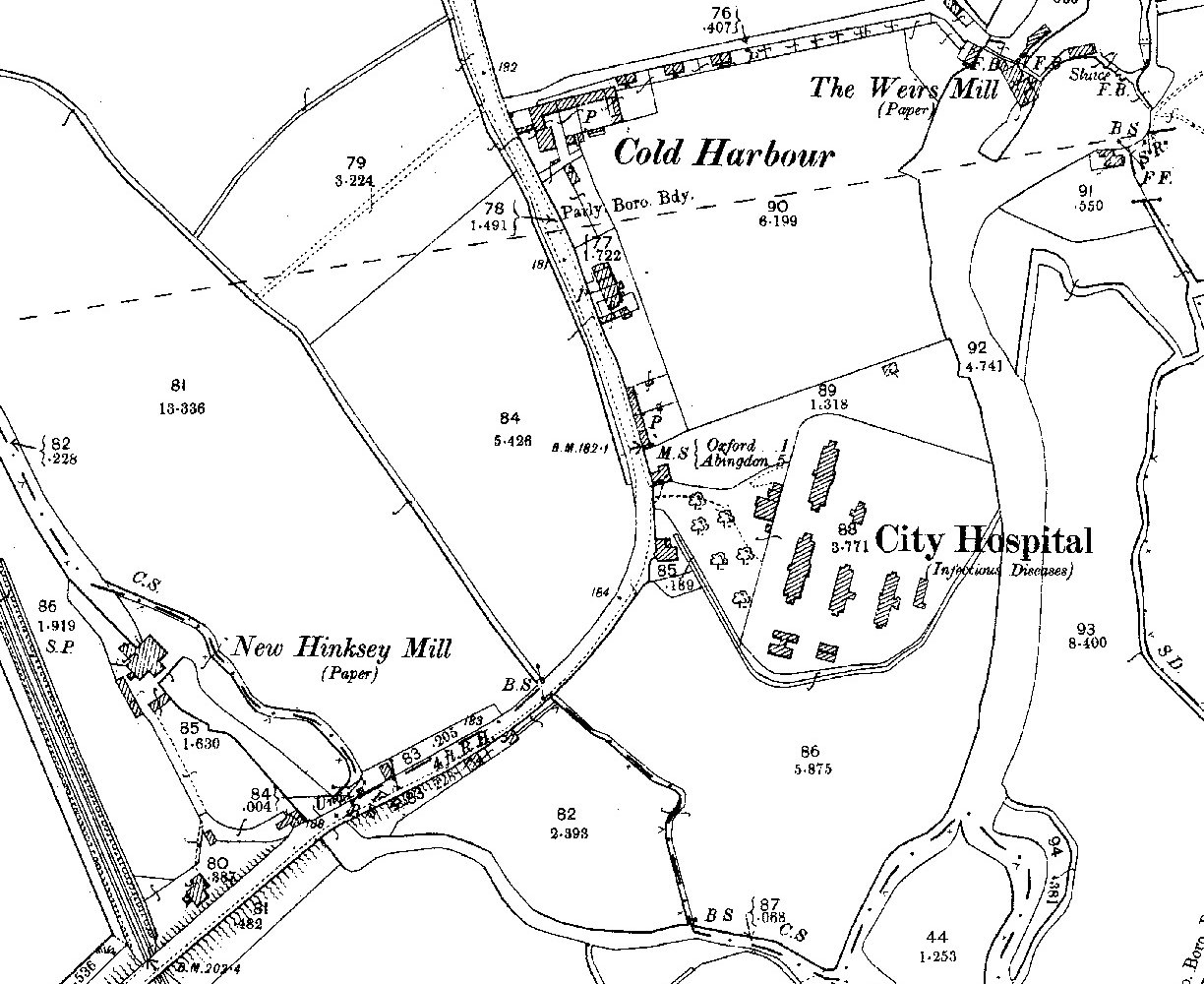 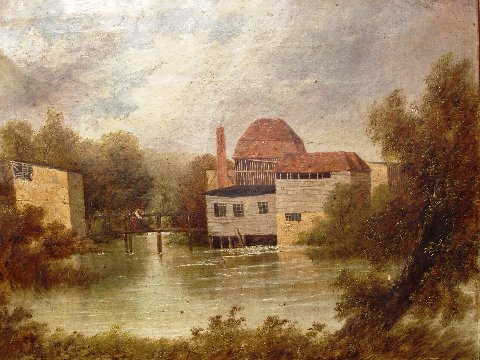 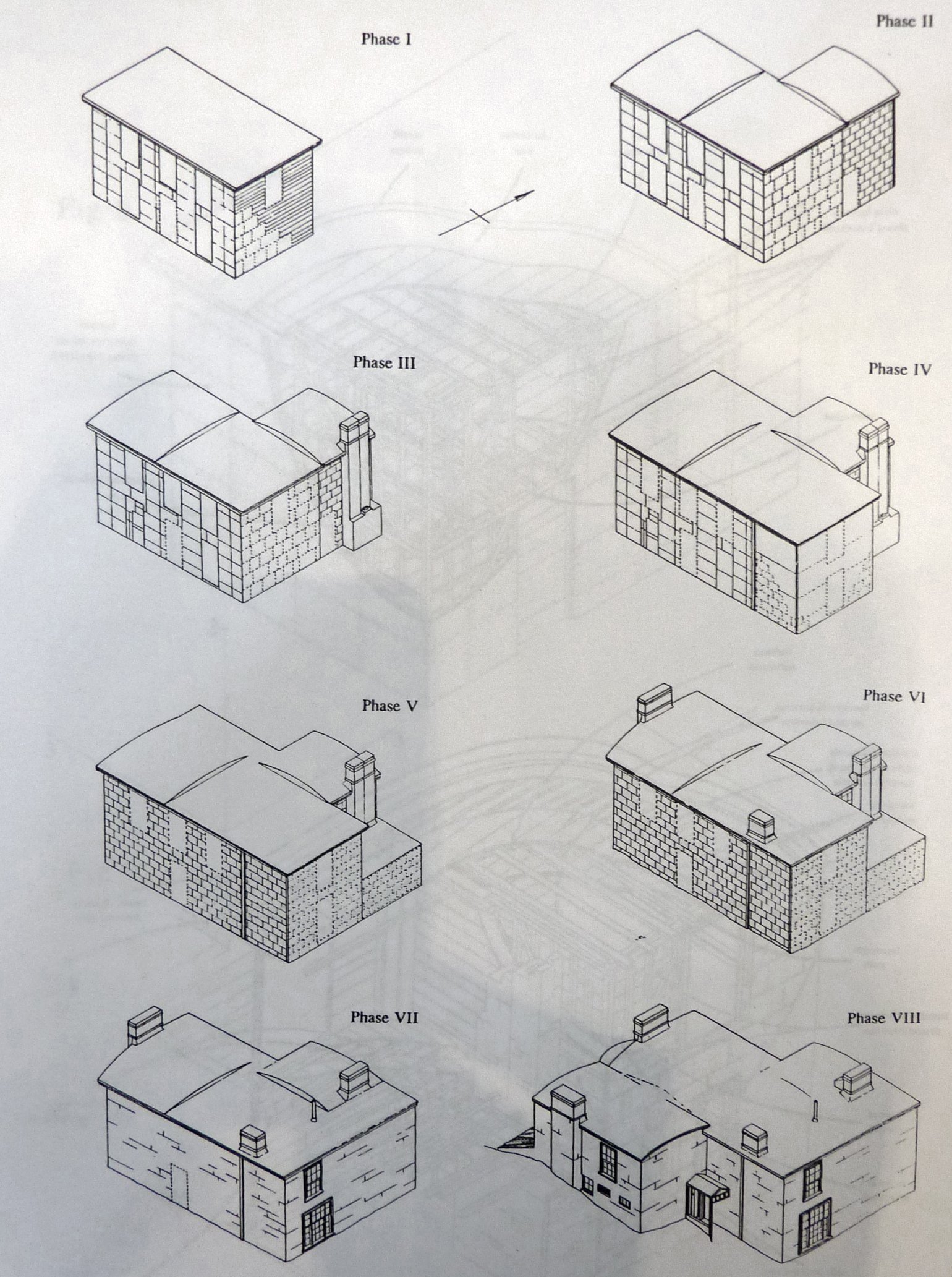