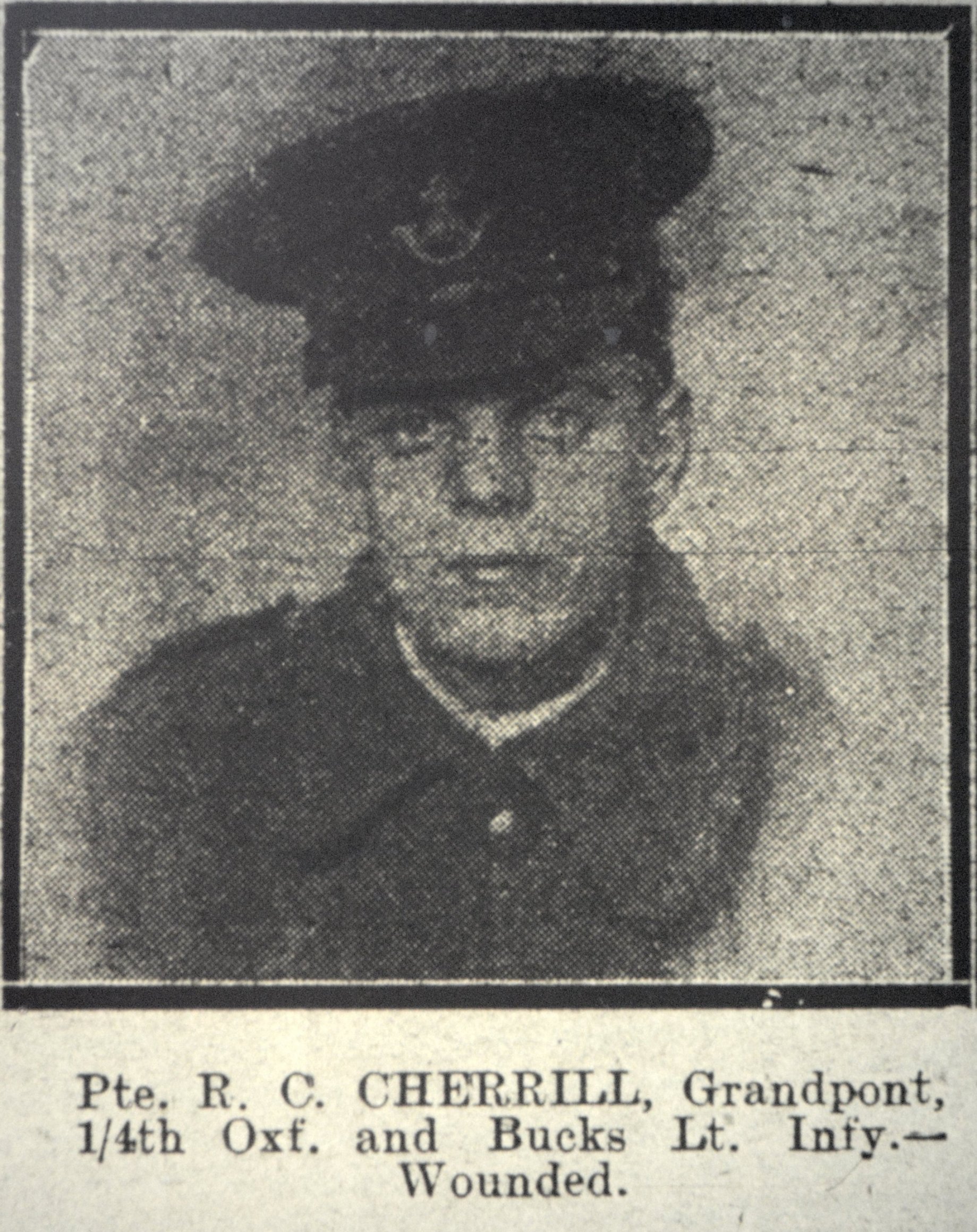 Image from the Oxford Journal Illustrated, 16 August 1916, p.6. The caption says that Pte RC Cherrill was 'Wounded', but in fact he had been killed.

Richard Cherrill was born in Oxford in September 1893, the second child of Edward Cherrill (born 1855/56, in Burcot near Dorchester-on-Thames, then in Berkshire) and his wife Emily (née Walker, born 1858/59 in Oxford). Edward worked as a shepherd in Burcot when he left school. He and Emily married in early 1880 and he moved to Oxford; the couple lived at 24 Blackfriars Road in St Ebbe's and Edward found work as a waiter.

By 1891 Edward was working as a college servant and he and Emily had moved to 134 Marlborough Road in Grandpont. They had a lodger, Maria Marsland, a spinster shirtmaker/seamstress, who lived with them until at least 1911. Here a son, William Edward, was born in December 1891 and baptised in St Matthew's church the following March. Richard was born two years later.

By 1901 the family had moved to 72 Marlborough Road and Edward was a waiter again; in 1911 he was working as a lavatory caretaker for the borough council. Richard's older brother William was working as a factory assistant at Frank Cooper's marmalade factory in Park End Street and Richard was a porter at a chemist's shop.

Richard joined the army and became a Private with the 1/4 Battalion of the Oxf & Bucks Light Infantry, service no. 3591. The battalion was sent to the Somme and Richard was killed in action on 23 July 1916, aged 23, at the Battle of Pozieres. William Ingram, Percy Palmer, Harry Saunders and Arthur Whiteley were all killed in the same battle on the same day. Pozieres was a village in the German second line and was only captured after an epic struggle on 23 July by a joint British-Australian assault. The battle around the village and beyond continued for many weeks afterwards.

Richard was buried at Pozieres British Cemetery at Ovillers La Boisselle in northern France. At the request of his father, his gravestone is inscribed 'Ever in our thoughts'. Three weeks after his death, this notice appeared in The Oxford Times of 12 August 1916.

Richard's older brother William also fought in the War, but survived. He was a Private with the Royal Field Artillery, service no. 7065.

William and Richard's parents remained in Marlborough Road until their deaths. Edward died in March 1927 aged 71, and Emily died a year later, aged 69.