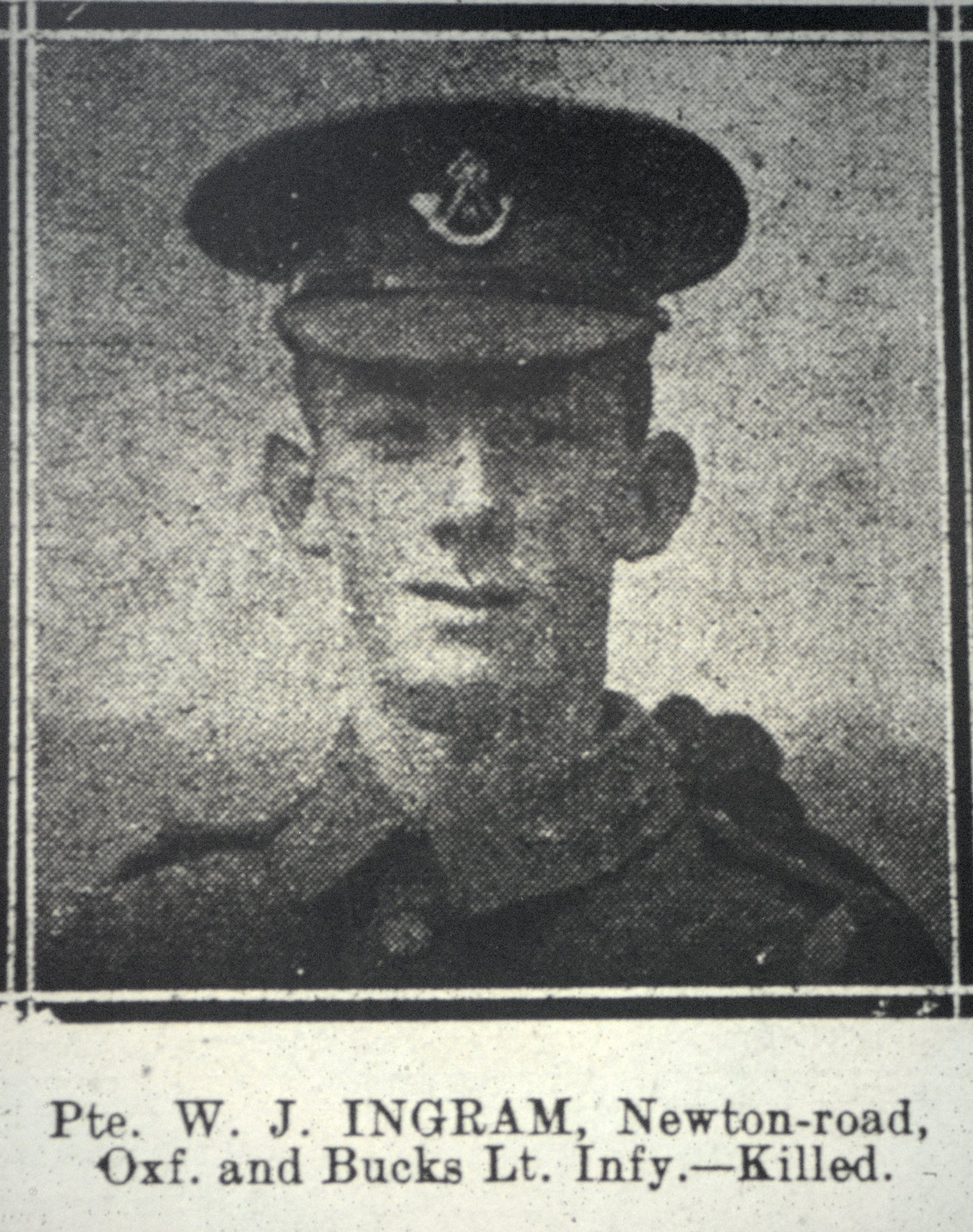 William Ingram was born in 1898/99 in Port Elizabeth, South Africa, the oldest child of John Henry (born in Greenwich, London, in 1874) and Rosina (née Martin, born in Port Elizabeth, in 1877/78). The couple married in 1896/97. William's two younger brothers, Albert Edward and Percival Joseph, were also born in Cape Colony, South Africa: Albert in Tarkatan in 1902/03, and Percival in King William's Town in December 1904.

The family moved to England (possibly in 1907) and by 1911 they were living at 33 Norreys Avenue off the Abingdon Road, and John was working as an assistant pawnbroker. By 1916 they had moved to 14 Newton Road in Grandpont, and William's brother Albert was working as a labourer for Salter's Steamers, the boat-building and hire firm based at Folly Bridge.

William must have enlisted as soon as he was able to. He joined the 1/4 Battalion of the Oxf & Bucks Light Infantry, with the rank of Private, service no. 4788. The battalion was sent to the Somme and William was only 18 when he was killed in action on 23 July 1916 at the Battle of Pozieres. Richard Cherrill, Percy Palmer, Harry Saunders and Arthur Whiteley were all killed in the same battle on the same day. Pozieres was a village in the German second line and was only captured after an epic struggle on 23 July by a joint British-Australian assault. The battle around the village and beyond continued for many weeks afterwards.

William's body was never recovered but he is commemorated on the Thiepval Memorial. This is the memorial to the Missing of the Somme, which bears the names of more than 72,000 officers and men of the United Kingdom and South African forces who died in the Somme sector and have no known grave. After his death William's personal effects of £3 7s were paid by the army to his mother Rosina.

William's father John also fought in the War (despite being almost 40 when it started) but survived. He was a Bombardier with the 136th Battalion of the Royal Garrison Artillery, service no. 292529. In 1918 the family also had another member of the armed forces registered at their address at 14 Newton Road: Emily Frances Salamon, who was away serving as an Army Cook with the Queen Mary's Army Auxiliary Corps, service no. 9361.

The Ingrams appear to have moved away from Grandpont after the War. William's mother Rosina died in Abingdon in July 1937, aged 60, and his brother Percival died in Basingstoke in August 1980, aged 75.