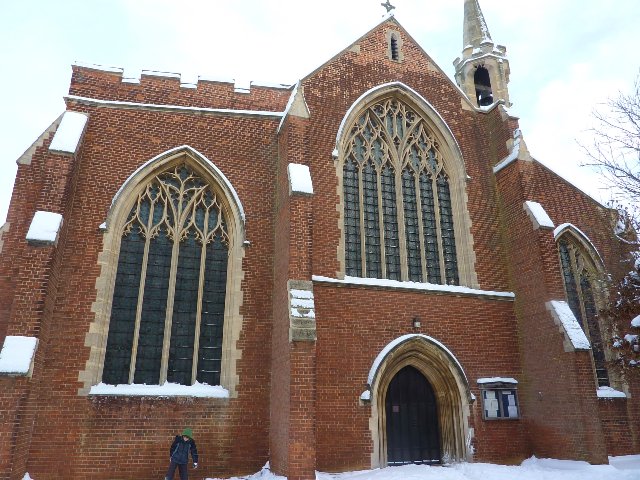 The church was built in 1899-1900, and it replaced an earlier chapel-school which had been built in 1870 to serve the developing suburb of New Hinksey, which at that time was in the parish of South Hinksey. The new church was designed by the nationally-famous architects William Bucknall and Ninian Comper and comprises a nave of five bays, with north and south aisles, each of four bays. Due to lack of funds the chancel was never built, though the nave was extended eastwards in the 1930s to form a chancel. On the outside of the back wall of the church (the eastern side) you can see the arch which would have led into the chancel, had it ever been built. In 1930 the eastern bay of the north aisle was furnished as a chapel. The church was (and continues to be) Anglo-Catholic or High Church, in contrast to St Matthew's on Marlborough Road.

St John the Evangelist church is listed Grade II because it is of special interest as a very good example of a late Victorian Gothic Revival church in a free Perpendicular style, with a spacious, well-proportioned interior and impressively decorated roofs. Its architect, Ninian Comper (a staunch Anglo-Catholic), was one of the last great architects and designers of the Gothic revival.

The nearby vicarage (at the end of Vicarage Road) was built in 1887-8 for the Rev Halsall Segar and was designed by the well-known Oxford architect HW Moore. Before this the vicar lived in the vicarage which stands at the far western end of Lake Street, facing out over the lake, which was built in around 1850.