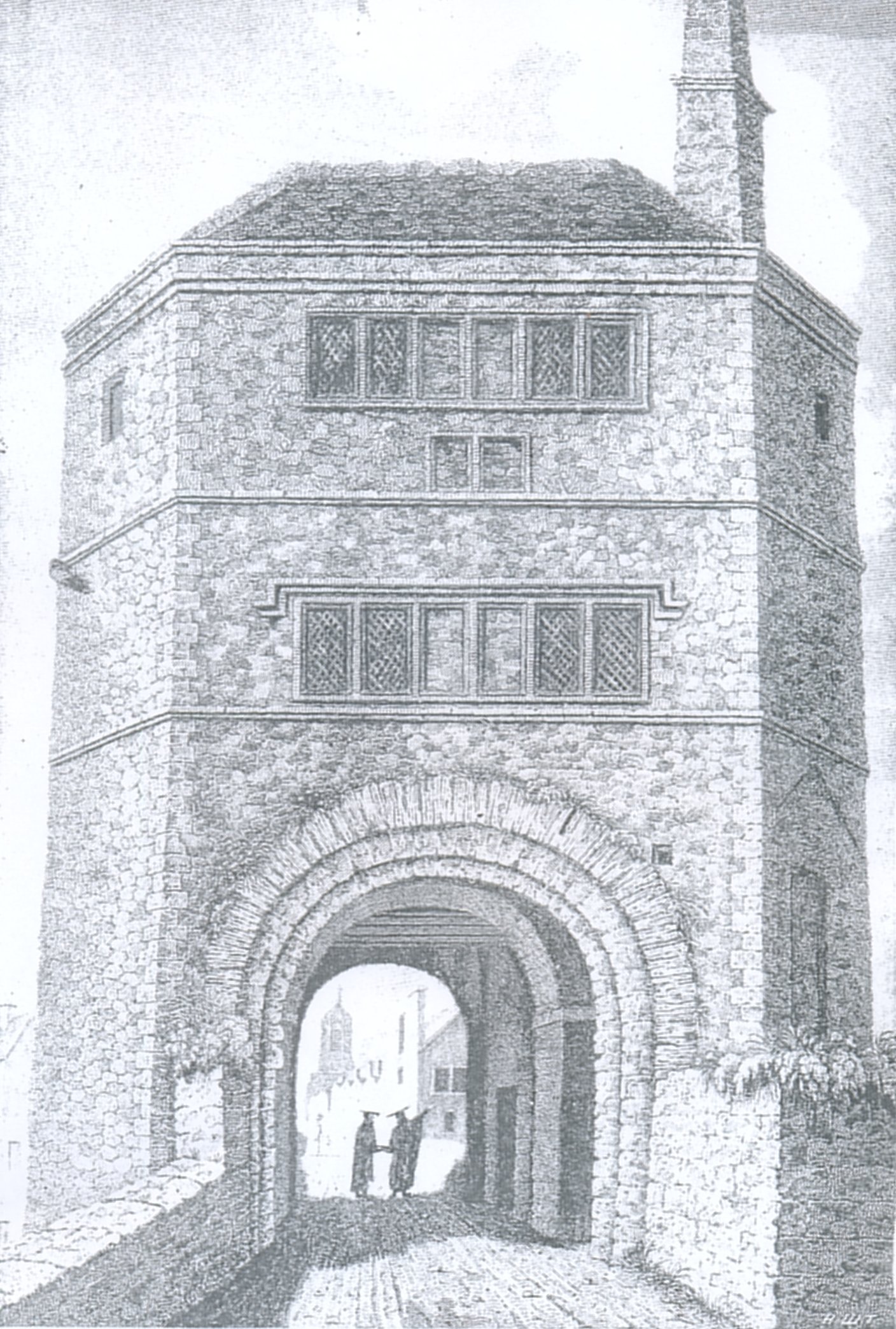 The tower - Friar Bacon's study - at the southern end of Folly Bridge appears to have been hexagonal, with first and second storeys and mullioned windows (added by Thomas Welcome in the early 17th century). The road taking travellers onto Folly Bridge passed under it, through a round arch. Tom Tower at Christ Church on St Aldates can be seen in the distance. Image © Oxfordshire County Council, Oxfordshire History Centre.

Oxford's first stone bridge, known as South Bridge, was built over the Thames by Robert d'Oilly (who also built Oxford Castle) in the 11th century. It was part of the great causeway, or grand pont, which carried what is now the Abingdon Road over water meadows, on more than forty arches, from St Aldates to the bottom of Hinksey Hill. A defensive tower, with a portcullis, drawbridge and heavy gates was built at the southern end of the bridge, probably in the 13th century. It was known as New Gate and provided a barrier to anyone approaching the South Gate of the city (which was on St Aldates, where Christ Church now stands) from along the causeway. Timber, iron bars and locks were bought for it in 1310-11 and repairs were made regularly throughout the later Middle Ages. The defensive tower became known as Friar Bacon’s study because the Franciscan Friar Roger Bacon, who lived between 1214 and 1292, and was said to be the founder of English philosophy and one of the greatest minds in Europe, apparently used it as an observatory to study astronomy.

Like Magdalen Bridge (which was known as Petty Pont, 'small bridge'), South Bridge was largely maintained by charity and bridge hermits were appointed from at least the 13th century to collect alms and carry out repairs. In about 1360 the town bought property on the eastern side of the causeway for the bridge hermits, where Grandpont Villas (65-85 Abingdon Road) are now. The Hermitage or Bridgewright's place was here, and opposite it was the wayside chapel of St Nicholas, where alms for the bridge were collected. Hermits were appointed until the late 15th century. In about 1530 repairs were being paid for by the President of Corpus Christi College and his donation was cited in the next century as evidence that the maintenance of the bridge was the college's responsibilty. For centuries disputes continued over the respective liabilities of Corpus Christi, the city, the university and the county of Berkshire [land south of Folly Bridge was in Berkshire until 1889]. 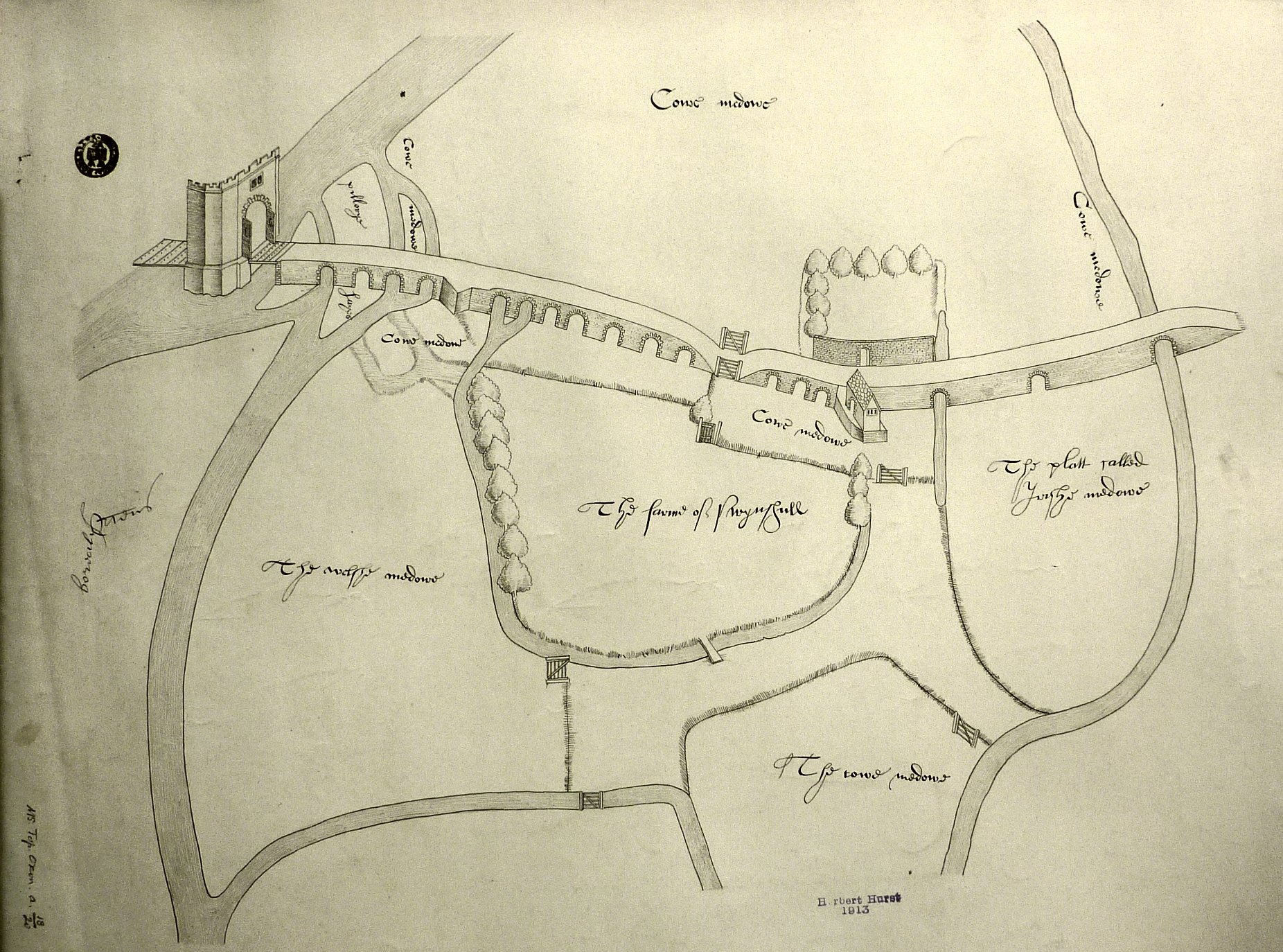 Drawing of an estate map of c. 1500 (with east at the top) showing arches of the Grandpont causeway, with Friar Bacon's study at the far left (at the southern end of Folly Bridge). The chapel of St Nicholas is the small building with the steeply-pitched roof, standing end-on to the western side of the causeway (in 'Cow Meadow'). Opposite it was the hermitage occupied by the bridgewrights. Drawing by Herbert Hurst, Plans & Drawings of Oxford, 1913; © The Bodleian Library, MS Top Oxon a.18, 20.

The tower (at this time still single-storey) and the causeway are shown on an estate map of c. 1500. There was a drawbridge on at least one side of the tower; this drawbridge remained until the 17th century. From early in its life the tower was a place of residence, but it continued to be viewed as a defensive structure: as late as 1565 the city, in leasing it to the Berkshire archdeaconry court, reserved the right of entry at all times for the city's defence. But by the early 17th century the defensive gate was no longer in use and shortly after 1611 Thomas Waltham (alias Welcome) added another storey to the tower and it became known as Welcome's Folly, giving the bridge its present name. 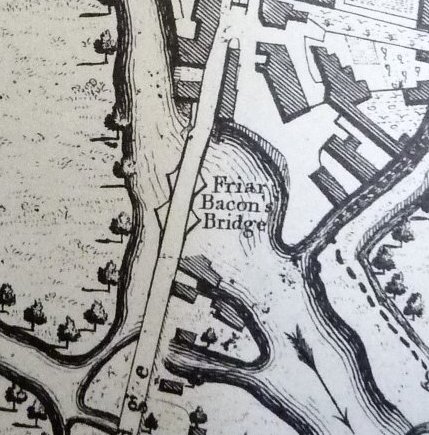 Extract from Taylor's map of 1750, updated by Faden in 1789 (by which time the tower (Friar Bacon's study) had been demolished).

The bridge is shown in a 'View of the old bridge' from the Oxford Journal Illustrated of 4 April 1923, and (marked as 'Friar Bacon's Bridge') on this extract from Isaac Taylor's map of 1750. Between the arches were massive stone piers with triangular sides projecting into the river. These gave the bridge strength to support the roadway above; moreover the recessed parapets gave a retreat for pedestrians, and the triangular projections formed cutwaters which diverted the current and broke the force of ice or other floating bodies. These piers are shown on a cork model of the bridge made in 1878, though only on one side. They can also be seen in this view of Folly Bridge and Friar Bacon's Study.

Taylor's map was originally drawn in 1750 but this is an updated version produced by William Faden in 1789, by which time the tower, or folly, at the southern end of the bridge had been demolished (in 1779) by the Hinksey turnpike trustees, for road widening. The waterworks, the rectangular buildings just below the words 'Friar Bacon's Bridge', were still in place however.

By the late 18th century Folly Bridge had become decayed and too narrow for increased traffic. In 1815 an Act of Parliament was obtained to rebuild it. The current bridge was designed by the London architect Ebenezer Perry (1779-1850) and built in 1825-7; a fine early 18th-century wharf house (which can be seen on the far right in this picture) was demolished to make way for it. The bridge has three rusticated stone arches, and it was built of Headington stone; the very different parapets [walls either side of the bridge] are of stone from the Forest of Dean, presumably transported by canal and river, because high-quality local stone was not readily available. Ornate iron railings, which are still in place, were designed by McIntosh of London. The rebuilding of the bridge cost over £19,000; a tollgate was placed on the Abingdon Road to collect tolls from road-users, in order to help pay the debt incurred. Here is a view along Folly Bridge, looking towards St Aldates, in 1907.

At the same time as the bridge was being rebuilt, Folly Island itself was remodelled. Prior to 1825 the island was much larger than it is now, as shown on the first image below, which is an extract from a map of 1815 held in the University College archives. The island immediately west of Folly Bridge (marked '2.') was originally balloon-shaped. In 1824 University College sold the island to the Commissioners of Folly Bridge who cut a new channel or basin east-west through the island, leaving the small southern portion shown on second image below (beneath the word 'BASIN'), which is an extract from the Ordnance Survey map of 1878. 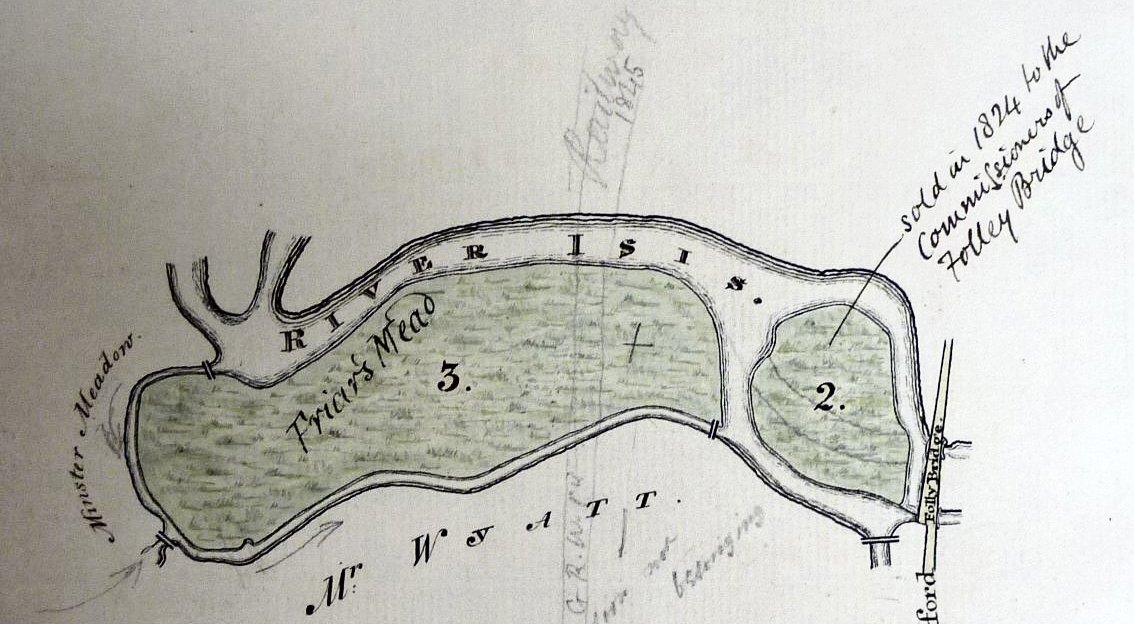 Extract from a map of 1815 in the University College archives, showing land immediately to the west of Folly Bridge owned by the college. The area marked '3.' was known as 'Friar's Mead(ow)'; the island, marked '2.', was called 'Irelands Mead(ow)' and has Folly Bridge at its south-eastern edge. Image by kind permission of the Master and Fellows of University College, Oxford, ref: UC:E2/10/1M/1. 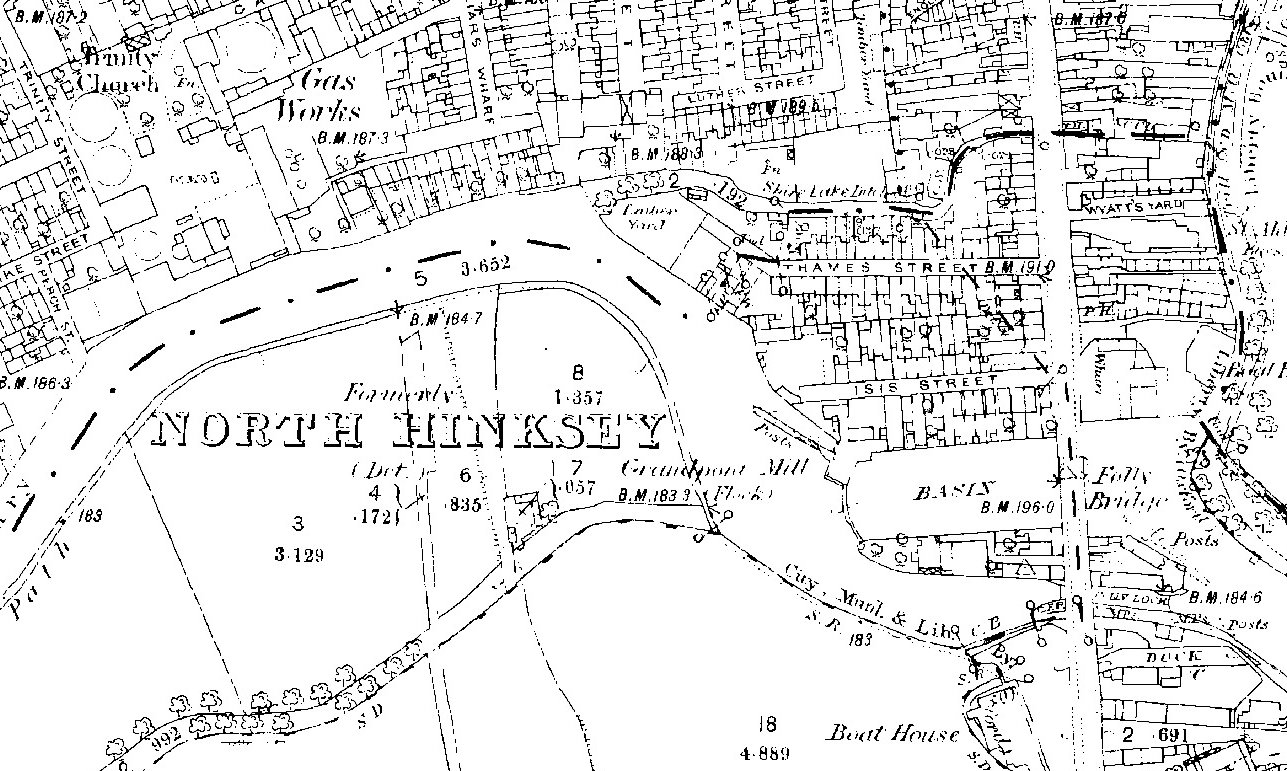 Extract from the Ordnance Survey map of 1878 showing the reduced Folly Island with the artificially-built basin (marked 'BASIN') immediately to the north of it.

Initially the remaining part of the island (which is the part that is still there today) was used as a coal wharf, but houses were built on it from the 1840s as commercial traffic on the Thames declined. Later Thames and Isis Streets were laid out across what had been the northern part of the island, and the old navigation channel (Shirelake Stream), running north-north-west from the northern end of the bridge (around the top of the original island), was filled in. (This stream originally marked the county boundary between Oxfordshire and Berkshire; to the east, it still runs across Christ Church Meadow as Shirelake Ditch.) Hence the northern part of the original island became part of the 'mainland' and the remaining island is only about a third as big as it was prior to the rebuilding of Folly Bridge in the mid 1820s.

The bridge and island have been occupied by various industrial and residential properties since medieval times. In the 17th century the city's waterworks were situated on the river nearby. In 1844 a new toll house was built on the bridge and in 1849 Caudwell's Castle was erected on the island. Since 1858 Salter's Steamers have occupied various buildings on and around the bridge and island, including the wharf house and warehouse built in 1827 when the new bridge was built, now occupied by the Head of the River pub. To the west of the bridge was the artificially-built channel or gated basin which allowed boats to moor so that goods could be loaded and unloaded on and off them from the wharves on either side; the posts of the gates can still be seen in the water.

From 1821 to 1884 Folly Bridge lock - a pound lock - stood to the east of the bridge, across the river channel which runs immediately south of Folly Island, and which was originally the Thames navigation. 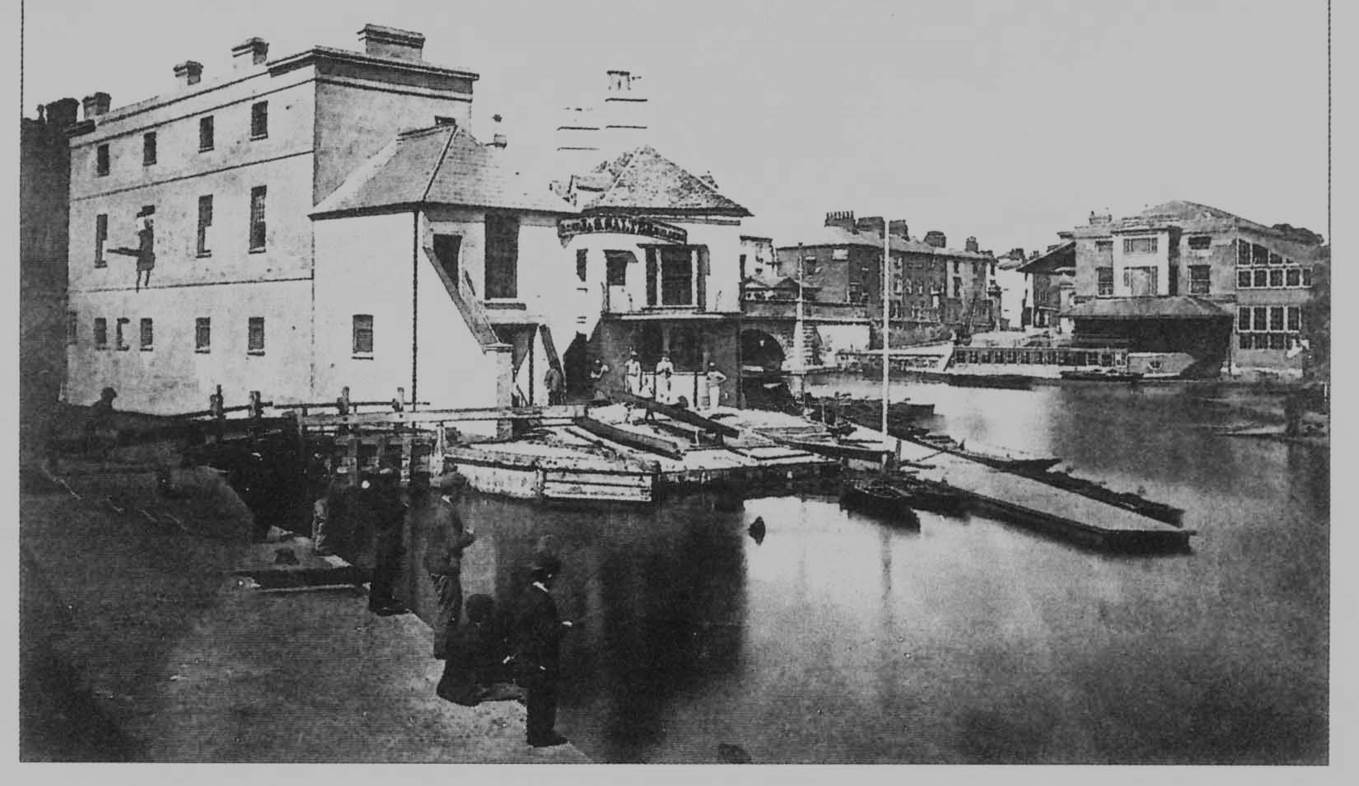 The gated pound lock (left) with Salter's buildings on Folly Island behind and to the right of it, c.1873. Salter's warehouse, now the Head of the River pub, is on the far right. Image © Salter's Steamers.

Earlier there had been a weir underneath the bridge which had a flash lock, and later a pen lock. The basin, the wharves and the pound lock can be seen on this plan of 1844, drawn up when the wharves were being sold at auction. The weather-boarded lock-keeper's house survived beside the towpath until 1999. It was demolished to make way for Hertford College's graduate centre which occupies the site of wharves used from the 1870s by boat builders Salter's Steamers.

Folly Bridge can be seen labelled as 'Friar Bacon's Bridge' on this map by Isaac Taylor. Note that St Aldates is labelled 'Bridge Street'. The original map was drawn by Taylor in 1750 but this is an updated version produced by William Faden in 1789, by which time the tower, or folly, at the southern end of Folly Bridge had been demolished. The waterworks, the rectangular buildings just below the words 'Friar Bacon's Bridge', were still in place however. (Click image to close) 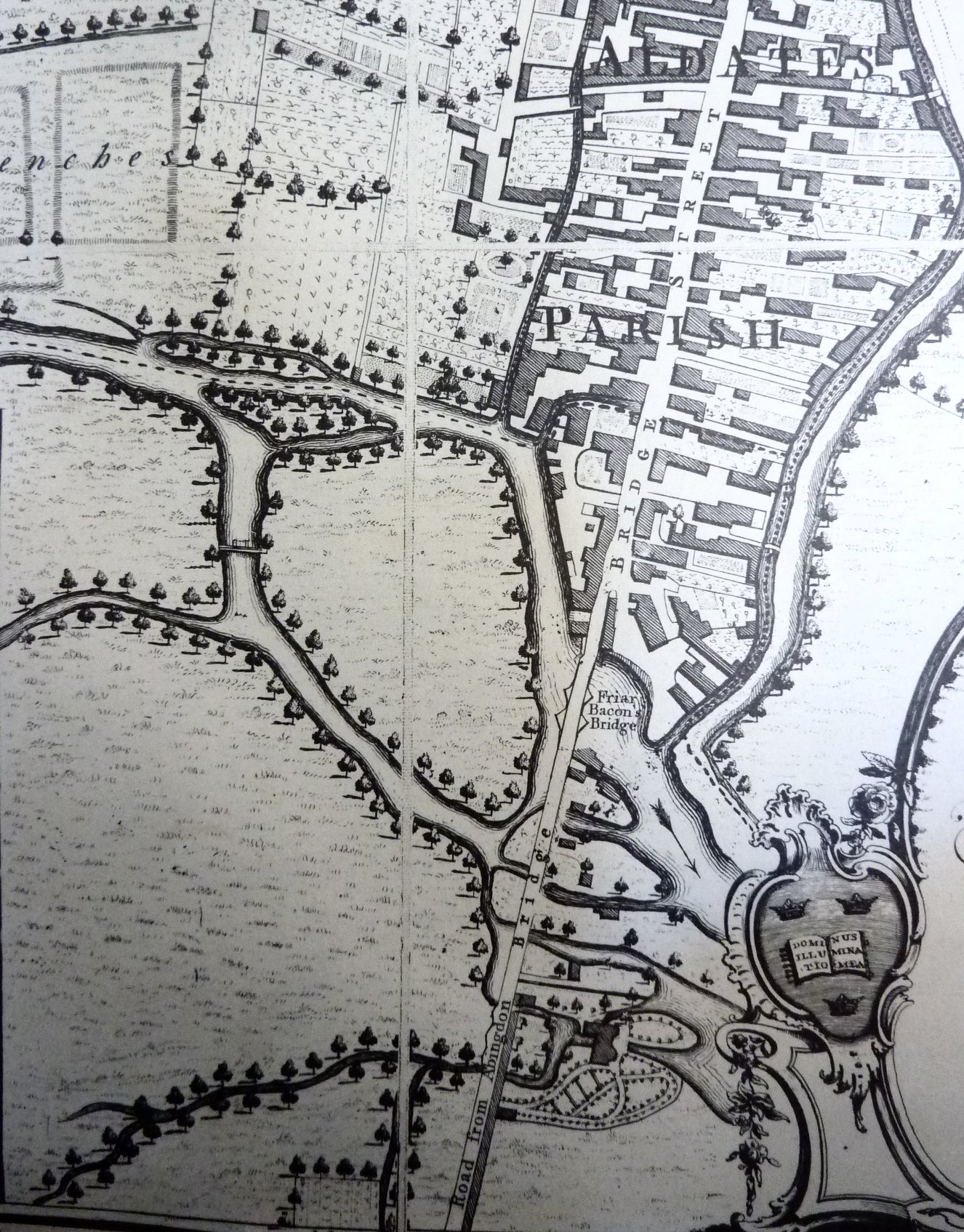 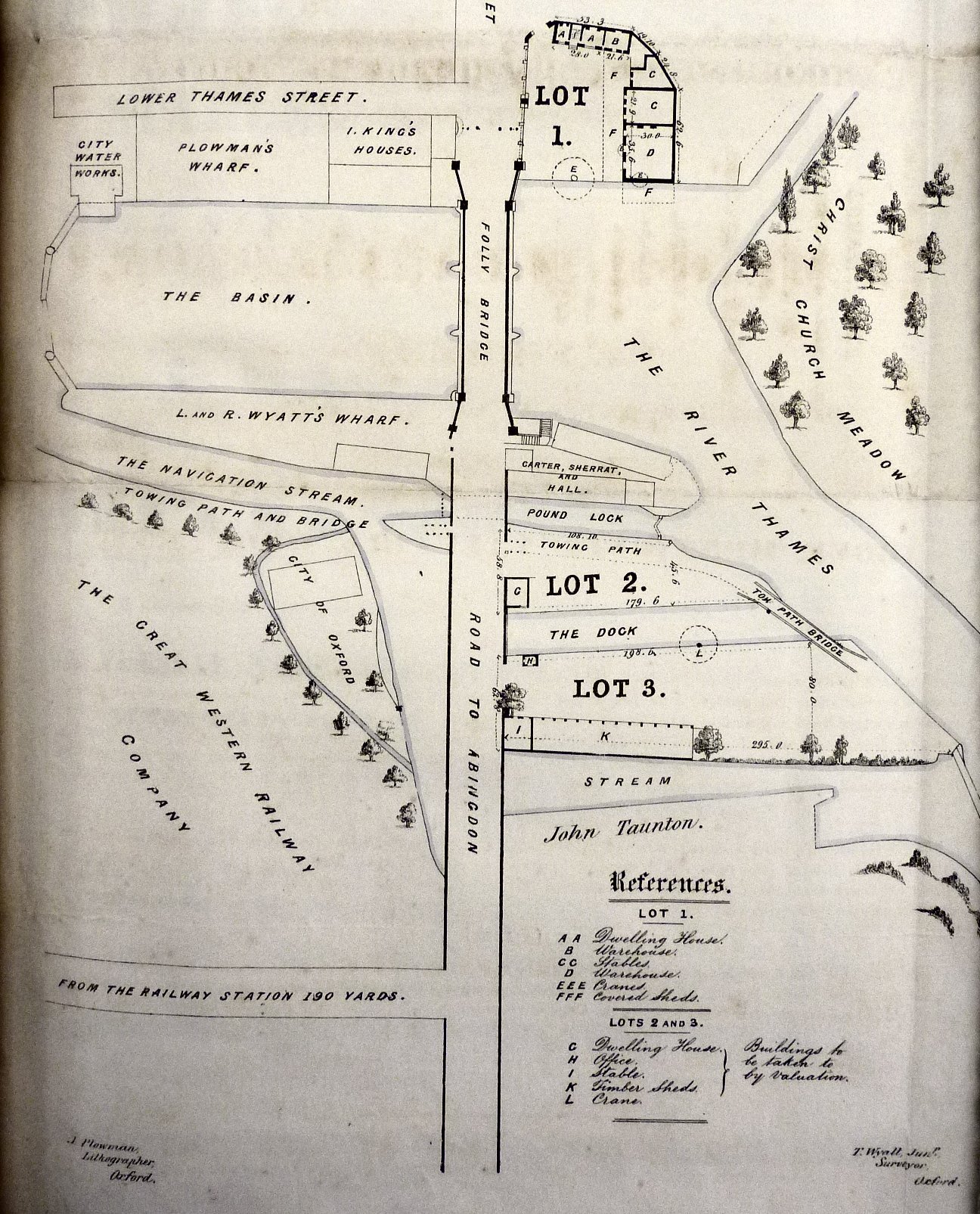 Looking north over Folly Bridge towards St Aldates in 1907. Notice the horse tramlines in the road, the former toll house (here being used as a punt hire office by George Harris) on the left, and the Dolphin & Anchor pub on the right. Tom Tower of Christ Church is in the middle distance. Image © Oxfordshire History Centre, ref: D263879a. (Click image to close)

Plan of 1815 (with east at the top) showing 'intended improvements' to Folly Bridge including the cutting of a 'Proposed Channel' through the island. 'Bridge Street' is St Aldates. 'The present waterworks' are shown at the south-east corner of Folly Bridge (labelled no. 5). The site of the planned new waterworks is shown to the west, on the northern bank of the proposed channel, opposite a new lock. (Click image to close) 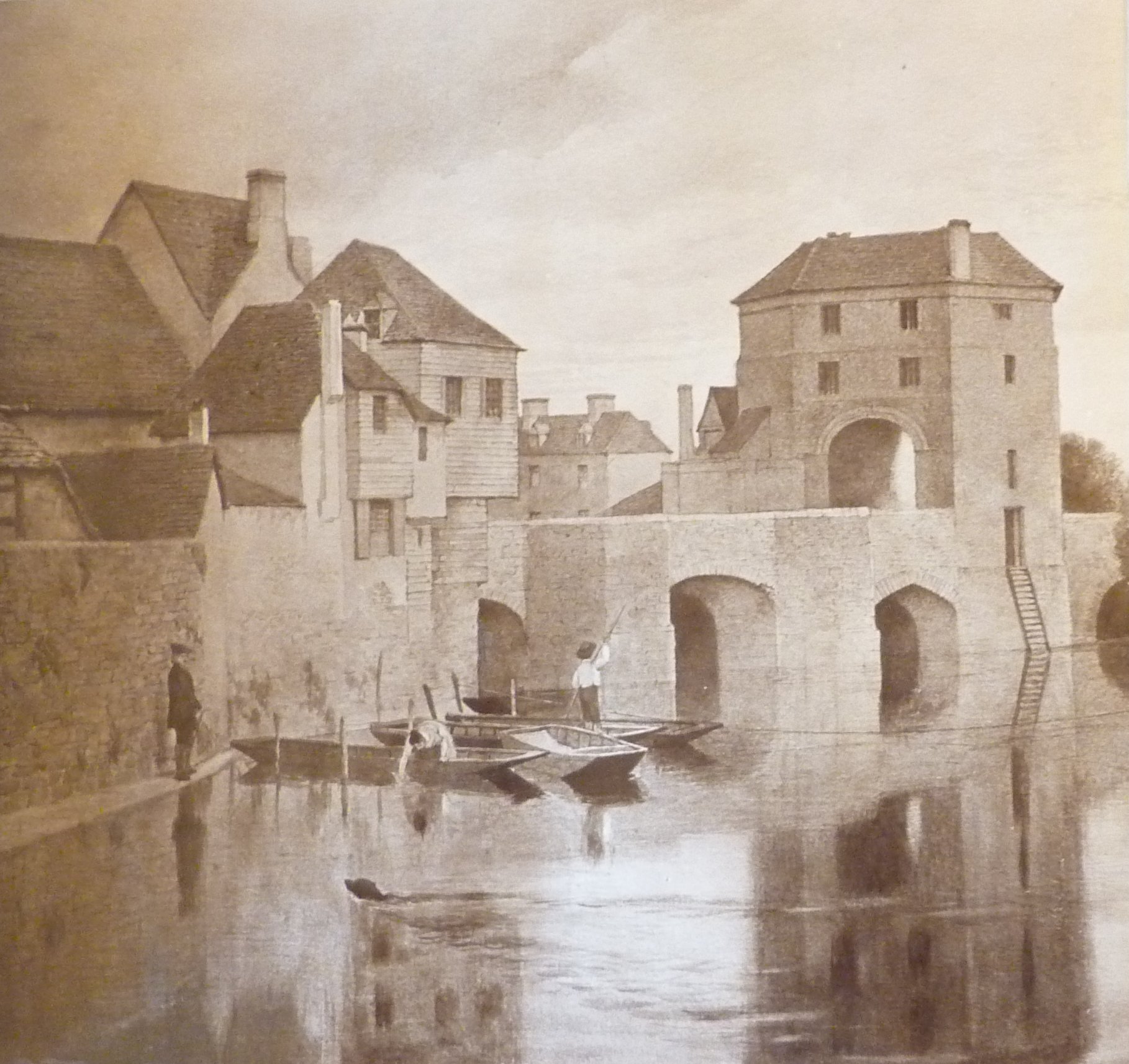